Take an oceanside stroll through the concrete jungle 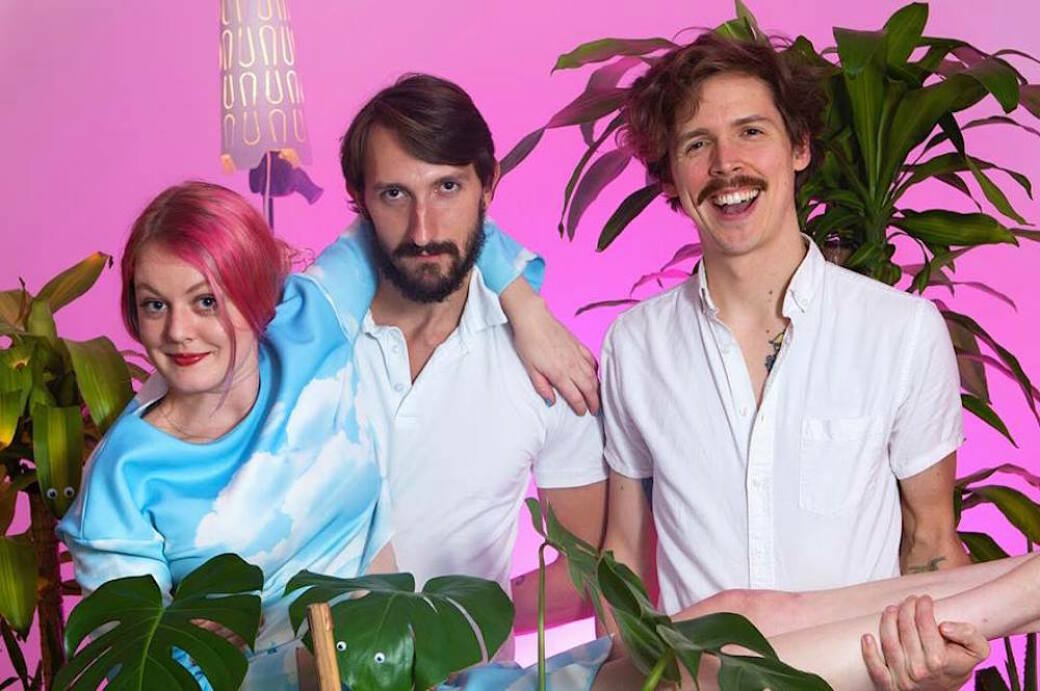 Photo credit: Chris Cella
A TROPICAL TRIO: Maddy Davis (from left), Inyo Galatea, and Mitchell Hardage are Fantasy Guys. Carry me away to paradise, please.
By Lauren Leathers Thursday May 3, 2018 10:53 am EDT

Who wouldn’t rather be chillin’ on the beach with a Bud Light Lime in their hand right about now? Since 2015, Inyo Galatea (guitar, flute, synth, and voice), Maddy Davis (vibraphone, synth, keyboards), and Mitchell Hardage (bass, rhythm tracks), better known as Fantasy Guys, have charmed audiences with a soundtrack for daydreamin’ and day drinkin’ in tropical paradise. Despite living nearly 300 miles away from the nearest coastal resort, Fantasy Guys are ready to kick-start the summer with all the tropical pop they can muster.

“We’re all about the good stuff,” Davis says.

With Fantasy Guys’ 2017 EP, Cruisin’ Around Respectin’ Babes, songs such as “Bedroom Soirée,” “Reveal Thy Deal,” and “Enchanté Señorita” have carried the laid-back aesthetic to new highs. Now, the group is working on a follow-up EP, a full-length album, and preparing to take the party on the road. The EP is due out this summer via Irrelevant Music, the label run by Atlanta music promoter and DiCaprio singer/guitarist Kyle Swick.

Fantasy Guys unleashed a wave of floral-shirt energy with 2015’s Surfin’ on a Wave of Juice, and led an oceanside stroll with 2016’s On Poppy Island. The forthcoming recordings expand on the group’s tropical persona, adding more synth and fewer guitar parts, without forsaking the beach-loving, posi-vibes that the group has harnessed all along. “Both the new EP and album will mix the R&B and tropical sound we cater to,” Galatea says.

Like the perfect piña colada, Fantasy Guys’ May 7 show at 529 will be a balanced mixture, blending old and new songs. It’s also a chance to let Cruisin’ Around Respectin’ Babes work its magic, as only one of the songs has been played for an audience.

William Kennedy’s Freakylamps lighting fixtures will enhance the sensory experience with hues of light and color that underscore the musical moods.

In an era where nearly every conversation, news story, and social media post is laced with talk of presidential scandals, social injustice, and maintaining one’s sanity amid Trump’s American hellscape, it’s important not to take oneself too seriously.

Much of the inspiration behind Fantasy Guys’ fun, chill demeanor is inspired by Tropicália and other forms of Brazilian funk and pop music. “The thing that immediately drew me to any style of Brazilian music is that you can’t listen to it and feel badly,” Galatea says.

After all, maintaining a positive mental attitude is what Fantasy Guys are all about. “There was a point when I asked myself, ‘Should I be making this happy music in a time like this?’” Galatea says. “A friend told me that it’s necessary to keep the lightheartedness, to cheer people up, and remind people about good things, and not just focus on the bad.”

Davis underscores the sentiment by adding that “suspension of disbelief is necessary as a survival tactic.”

As such, the group maintains its chilled out island pop sound, continually expanding its palette by experimenting with different musical styles and writing elements, focusing on all of the fun in the sun without the burn.