There’s more than meets the eye 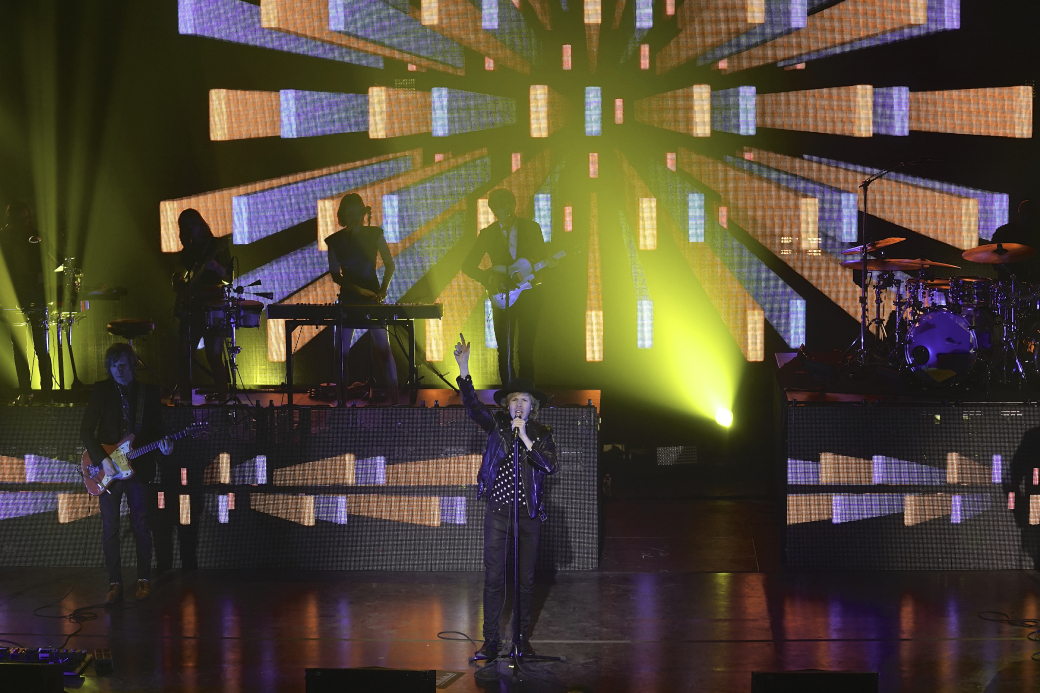 In the Spring of 1994, you couldn’t escape Beck’s breakthrough hit, “Loser.” The folk/hip-hop mash-up was everywhere. Everywhere that there was at the time — on the radio, music video channels, in the clubs, climbing the charts. Beck Hansen’s star was ascending just as Kurt Cobain’s came crashing down. Punk may have finally broke in the two or three years previous, but with Cobain’s death, the flannel ’n’ plaid crowd was left picking up the pieces. “Loser,” with its self-deprecating lyrics, seemed to echo the times.

“Loser” might have infused hip-hop into a close-knit indie scene still largely unaffected by the success of the Beastie Boys and other alternative hip-hop acts, but it also offered a glimpse into the folk and blues at Beck’s core, music largely ignored by most musicians during the punk years. And, while the song was sold to the slacker generation as some sort of a rallying cry, Beck himself was not of the stereotype.

The afternoon before the songwriter’s sold-out show Tuesday night at the Tabernacle, Beck explains to members of the Recording Academy during an invitation-only talk, “Up Front and Personal with Beck,” how he recorded the song during a six-hour session at a friend’s house a year before its eventual major label release.

The slide guitar hook is lifted directly from Dr. John’s “Walk On Gilded Splinters,” with Beck playing the musical phrase himself, rather than it being sampled. The rudimentary styling was then looped. The sinewy bottleneck riff captures music’s past, while the beat box beat acknowledges its future. Unknown at the time, the composition would serve as a blueprint for much of Beck’s songwriting for years to come. That balance of “not too retro, not too modern” is one he still strives for in his music, 13 albums and almost 30 years later.

Beck’s musical roots are as much Son House, Mississippi John Hurt, Hank Williams, Woody Guthrie, and Blind Willie Johnson as they are De La Soul, the Beastie Boys, and the other groups he grew up listening to as a teenager. While known as a guitarist, the multi-instrumentalist’s first instrument is piano. Given his lineage, the number of instruments he plays is not surprising.

Beck comes from a very creative background. His father, David Campbell, an arranger and composer, started out on viola. As a teenager,Campbell used to spend his Friday nights in Seattle hanging out with high school buds, the Kronos Quartet. His grandfather, Al Hansen, was a member of the avant-garde Fluxus movement, collaborating with John Cage, Yoko Ono, Joseph Beuys, and Nam June Paik. And, his mother, Bibbe Hansen, was a protege of Andy Warhol’s during the Factory days of the ’60s. Even with such a heavy background, Beck maintains he wasn’t directly influenced by his family, but allows he may have picked up some things through osmosis.

That is no more evident than during his multi-media live performance at the Tabernacle. Drawing from recordings spanning his career, Beck performed with a large screen, multi-tiered backdrop that wasn’t used to reflect a light show, but to project it to the audience, giving the illuminations a stunning 3D effect.

While the current tour in support of Colors, follows an established set list, there’s room for Beck to improvise, giving each night’s performance some life of its own. Tuesday night, Beck started off the solo acoustic portion of the show with his cover of the Korgis’ “Everybody’s Got To Learn Sometime,” a song he was asked to record for the soundtrack to Eternal Sunshine of the Spotless Mind. During a break in “Debra,” he commented that he felt Prince’s spirit in Atlanta, and performed a full version of “Raspberry Beret.”

Prince’s recorded version, known for its richly-orchestrated, psychedelic musical backing, was just as forceful performed by Beck standing alone onstage. It’s the strength of the song itself which propels it, which is why Prince was so wildly popular. He was a songwriter first, the studio allowed him to experiment further, building on the strength of the composition. Beck is not unlike Prince in that way, his songs share the same qualities. They may be tricked out in the studio — Beck started working on Colors in 2013, it wasn’t finished until 2017 — but the songs stand on their own.

When I am first introduced to Beck in the dressing room, before we are supposed to get “up front and personal” in front of the Recording Academy members in “Altitude,” the meeting room on the W Atlanta Midtown’s 27th floor, I’m struck by his focus. Tired from the long show at the Tabernacle the night before, he still looks you in the eye and takes in everything you say to him, the eyes as much tools of communication as the mouth and ears.

It’s that focus, combined with hard work and a strong belief in himself that continues to serve him so well. I don’t think Beck has yet realized his full potential, nor, do I think he’s been recognized for the gifted artist he is.

Golden years dept. … As was 1967, so is 1968 the 50th anniversary year of so many things music-related. Marking the 50th anniversary of the MC5’s explosive debut album, Kick Out the Jams, original guitarist Wayne Kramer has put together a new band — three of the five original band members are deceased — MC50, with guitarist Kim Thayil (Soundgarden), drummers Brendan Canty (Fugazi, the Messthetics) and Matt Cameron (Pearl Jam and Soundgarden), bassists Dug Pinnick (King’s X) and Don Was, and front person Marcus Durant (Zen Guerrilla).

Not only has Kramer added to the line-up, but a “Super Fan Pre-Show Experience” package has also been added to the ticket sales. By paying for the premium package, in addition to getting one general admission ticket, fans will also join Kramer for a no-holds-barred conversation before the show (no topic off limits), including an exclusive look into Wayne’s personal guitar collection; a personal photo with him; one first edition, autographed copy of his upcoming memoir, The Hard Stuff: Dope, Crime, the MC5, & My Life Of Impossibilities (Da Capo Press); one limited-edition 18”x24” custom tour poster designed by artist Chuck Sperry; one custom “Kick Out the Jams” anniversary tour merchandise gift bag, and early entry into the venue. The Atlanta show is scheduled for Friday, September 7, at Variety Playhouse. Advance tickets are $35, general admission; $50, reserved seating and $149 for the packaged “Experience.”

Breaking out the bars dept. … Fortnox, a popular Atlanta band in the early ’80s will have its debut album, Fortnox, re-released on by Rock Candy Records. Originally available on vinyl through Epic Records, the U.K. label’s compact disc re-issue will feature four previously-unreleased tracks produced by famed British producer Eddy Offord (Yes, ELP, others). The original album was produced by the late Chris Tsangerides, another well-known U.K. producer. Remastering has been done by Andy Pearce, whose work includes recent Black Sabbath reissues. Fortnox founder and singer/guitarist Russ Fowler says he’s been doing interviews with Xavier Russell of Kerrang magazine, who is writing the CD's liner notes. It should be available in June.