Donald the Great and Christian Nationalism 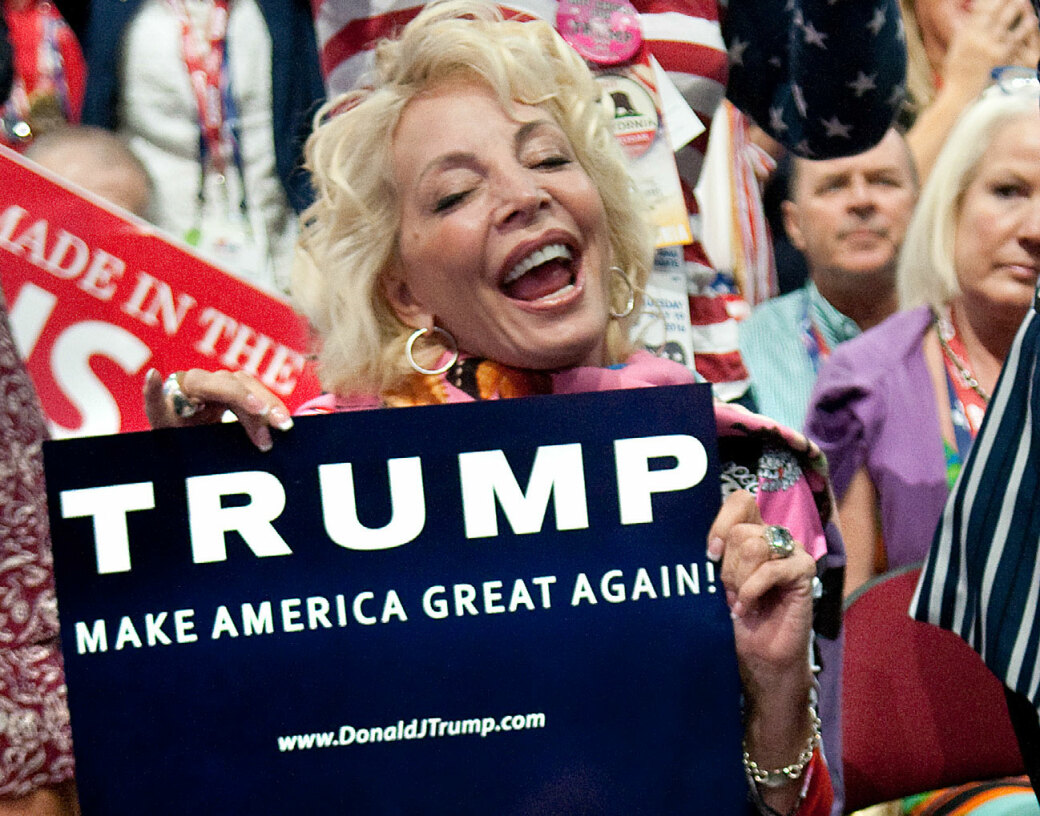 Character matters,” they said. “How can you lead America if you are having sex with an intern?” And not only “that woman,” but others before her. “Character matters!” Teaching at the University of Georgia during the depths of the Clinton Administration in the late 1990s, I heard those words often from my evangelical students, colleagues, and friends in Athens and Atlanta. As a Christian myself, I thought the phrase had some resonance. Character should matter. How much slack should we grant Bill Clinton, John Kennedy, or any other philandering president?

Then along comes Donald Trump, who is at least as much a sexual philanderer as Bill Clinton and has many more allegations of sexual misconduct against him. Further,
he uses racial and ethnic code words as dog whistles to an extent not heard from the White House since the openly racist Woodrow Wilson. Beyond that, Trump publicly berates and belittles political opponents and demeans his own cabinet members and staff in ways that we would not accept from a child.

Presidential character doesn’t matter to these Southern evangelical leaders. Results matter, and for them, it is results in line with their self-proclaimed Christian values. Rolling back policies supporting family planning, gay rights, and insurance coverage for contraceptives were simply the most immediate such results from the Trump administration. The weakening of environmental-protection restrictions, campus sexual- assault rules, and consumer protection policies are somehow cast as pro-Christian too, along with a border wall, nativist assaults on immigration, and a repudiation of foreign-trade deals.

Of course, Trump’s policies split Christians in the South. Many mainline Southern Protestants vehemently oppose several of his signature policy initiatives — just think of Jimmy Carter — as do many African-American and Hispanic evangelicals, such as Mississippi civil rights leader John Perkins and Georgia’s Jubilee Partners. Nevertheless, exit polls found that over 95 percent of Southern white evangelical voters favored Trump over Hillary Clinton in 2016. Public opinion surveys suggest that nine out of 10 Southern white evangelicals still support him. They represent a critical core of his Southern base and a powerful element of the Republican electorate.

In his recent cover article in the Atlantic Monthly, the Virginia-based, never-Trump white evangelical commentator Michael Gerson attributes this high level of support to a misguided quest for power and influence by evangelical leaders. “It is utter corruption,” Gerson writes of his fellow evangelicals. “Blinded by political tribalism and hatred for their political opponents, these leaders can’t see how they are undermining the causes to which they once dedicated
their lives.” To Gerson, character should matter.

I hear a quite different explanation when I talk to my evangelical students, colleagues, and friends in the South and elsewhere. Most of them still support Trump even if they acknowledge his personal moral failings. Looking for biblical justification for sticking with a narcissistic adulterer who behaves in a manner they would never accept from their own teenagers, some compare Trump to Cyrus the Great, the Persian king who freed the Jews from their Babylonian captivity in the sixth century BC, and rebuilt Jerusalem.

Cyrus was not a believer in the Jewish or Christian God. There is no evidence that he lived a moral or religious life. In the biblical book of Ezra, however, he is hailed as the liberator of God’s people and an extraordinary instrument of God’s will. God’s use of Cyrus to advance God’s purposes, some argue, testified to God’s dominion over all people, even nonbelievers.

Some Southern evangelicals say similar things about Trump. He is their Cyrus. God is using Trump to make America great again, restore Christian values, and defend religious liberty. Some add that Trump’s broken character and personal failings testify to God’s authority and dominion. God achieves his purposes, they say, even through a wretch like Trump. Using Trump as his vehicle makes it clear to all that God controls America’s destiny.

This outlook conforms to key features of modern evangelical thought. Over the past half century, public-opinion surveys show a growing adherence to so-called Christian nationalism among Southern white evangelical Protestants. Eschewing support for the separation of church and state traditionally associated with the Southern Baptist Convention and other conservative Protestant groups in the South, modern Southern evangelicals increasingly believe that the federal government should promote Christian values, allow the public display of Christian symbols, defend the religious liberty of individual Christians, and proclaim the United States as a Christian nation. They see America’s success as part of God’s plan.

Much as Cyrus promoted Jewish nationalism even though he was not a Jew, evangelicals see Trump as promoting Christian nationalism regardless of his character and even if he does not act or sound like a Christian. Giving voice to policies in line with the tenants of Christian nationalism — such as restricting immigration by Muslims, protecting religious liberty, and limiting access to abortion — serves to maintain Trump’s base. Indeed, it was by getting out in front on such issues during the GOP primaries (starting with charges that President Obama was a Kenyan-born Muslim) that Trump weaned evangelicals away from more openly evangelical candidates with demonstrably better Christian character. Evangelicals view themselves as an embattled minority in secular America and welcome Trump’s promise to defend them against a hostile culture that has substituted “Happy Holidays” for “Merry Christmas,” and forces Christian bakers to make cakes for same-sex weddings.

If results matter more than character, however, a failure to deliver results should weaken the president’s support among evangelicals. Indeed, if his brash words don’t lead to the changes they seek — and it is hard to see those changes happening given all the institutional and popular resistance to Christian nationalism in America — then evangelicals’ ardor will fade. Trump’s Administration will simply become another
disappointment for evangelicals akin to Reagan’s failure to deliver on his promises to overturn Roe v. Wade and restore school prayer. To be effective, Trump’s critics should focus more on his policy failings rather than on his failed character. Pointing to the impact that his trade war with China is having on commodity prices has undercut support for Trump in farm states, for example. The huge budget deficits projected from GOP tax cuts and spending increases have similar effects on fiscal conservatives. Even if this does not turn Southern Trump voters into Democrats, it may dispirit them enough not to turn out in the coming midterm elections much as happened during last year’s Virginia state elections and Alabama’s special Senate election.

Far worse for evangelicals, linking their religion to an unpopular president who does not exhibit the sort of moral character they extol shows signs of driving people from the church, particularly those young people least willing to tolerate hypocrisy. Surveys suggest that this so-called Trump effect on religious belief, while lower in absolute terms, is as marked percentage-wise in the South as elsewhere. Southern evangelicals typically care more about the faith of their children than about virtually anything else — perhaps even more than the success of their college football team. Pointing out the Trump effect on religious belief may prove the best argument against Trump in evangelical churches — at least it may help to keep their ministers from openly promoting Trumpism from the pulpit.

Cyrus is remembered as “the Great” because of the results he delivered. Time will tell if, for Southern evangelicals, it is Donald the Great or Disappointing Donny.

Ed Larson is a law and history professor at Pepperdine University, after many years at the University of Georgia, where he chaired the History Department. Larson is a Pulitzer Prize recipient in History. His new book from HarperCollins, “To the Edges of the Earth,” is about the race to explore the arctic.