The Outsiders: The High Museum of Art features self-taught artists in new exhibit 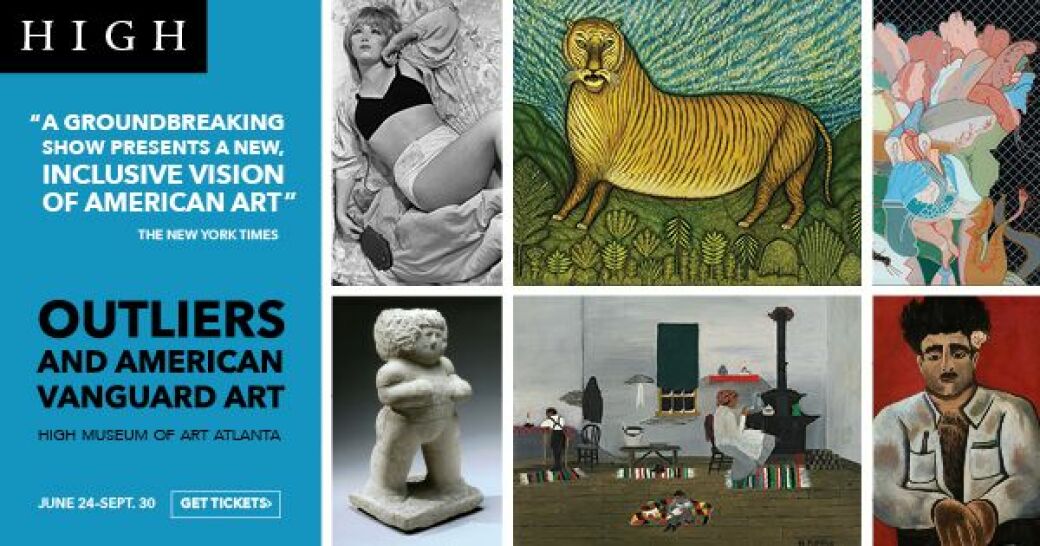 Normally when we hear of self-taught artists, we think of individuals who created their own aesthetic. These artists operated in relative isolation, outside the mainstream to express themselves using a variety of techniques and media. At The High Museum of Art’s latest exhibition: “Outliers and American Vanguard Art,” we learn self-taught artists tell a story about our country that breaks artistic traditions and cultural boundaries.

“It's really the first exhibition of its kind,” says Katherine Jentleson, the Merrie and Dan Boone Curator of Folk and Self-Taught Art at the High. “This exhibit will help people to see the way self-taught artists, who never went to art school, have impacted the course of modern and contemporary art.”

The show features artworks that span over a century and range from paintings and sculpture to photographs and textiles that highlight the tenor and talent of American creativity and self expression.

In preparation of the exhibition opening, Creative Loafing spoke with Jentleson about self-taught artists and their lasting legacy.

“Outliers and American Vanguard Art” opens Sunday, June 24 through September 30, 2018 at the High Museum of Art.

Katie Jentleson: That's the term used in the show to describe  artists who have a distance from the mainstream in some way, in many cases  because they weren't trained, but also because they often had positions in society that were marginalized, whether it was because they were living in rural areas or because of cognitive diversity, meaning different kinds of experiences that are outside of what we would consider to be normal in terms of mental health. And then certainly in terms of class and race. These artists because of their skin color or social standing were traditionally underrepresented in the mainstream art world.

CL: There are roughly 250 pieces of art in this show. How is it organized?

KJ: The show starts with works created in the early 20th century, and it begins by looking at how artists who were  part of the mainstream art world became interested in historical folk art. Artists, curators and collectors who were interested in forward looking trends—who were part of the vanguard--were inspired by work made by people, including artisans and craftspeople, who were not making art that defied conventions. They were making quilts and weather vanes and those sort of things to use in their everyday lives.

Trained artists saw there was a real aesthetic values to what their untrained counterparts  were doing. So that's where it all started really about a century ago, when the American art world, mostly artists, curators, and collectors, first became attune to the brilliance of people who didn't necessarily get any academic or formal art training. And that just continues over the course of the century. “Outliers” takes you through three historical periods where you can see the way that these artists’ influenced  the mainstream art world over time.

CL: When we look at these outliers, its not just quilts and paintings, right?

KJ: Absolutely. What the self-taught  artists brought to the table for a lot of trained artist is the way they used material. It’s not just that they are painters and photographers and sculptors, but that even within those practices, self-taught artists are often using really inventive or original kinds of materials. Whether it's glitter, unfired clay, or yarn that may have available. All those kinds of materials  that wouldn't be in previous decades considered as fine art material came into the mix because self-taught artists would use whatever they had access to and whatever they thought was an interesting material to use. That is a point of connection, not just in terms of the diversity of the show, but in terms of that dynamic of influence, the way that self-taught artists presented a new paradigm for trained artists because they broke down all these assumptions about what was and wasn't art material.


CL: What do you hope people will take away from this exhibit?

KJ: I just hope people will see self-taught artists in a new light. I want people to feel that they walk away from this show with the sense that truly anyone can be an artist. You may or may not have the training, but that should not be a defining factor of what your impact could be.