Atlanta guitarists thrive off each other 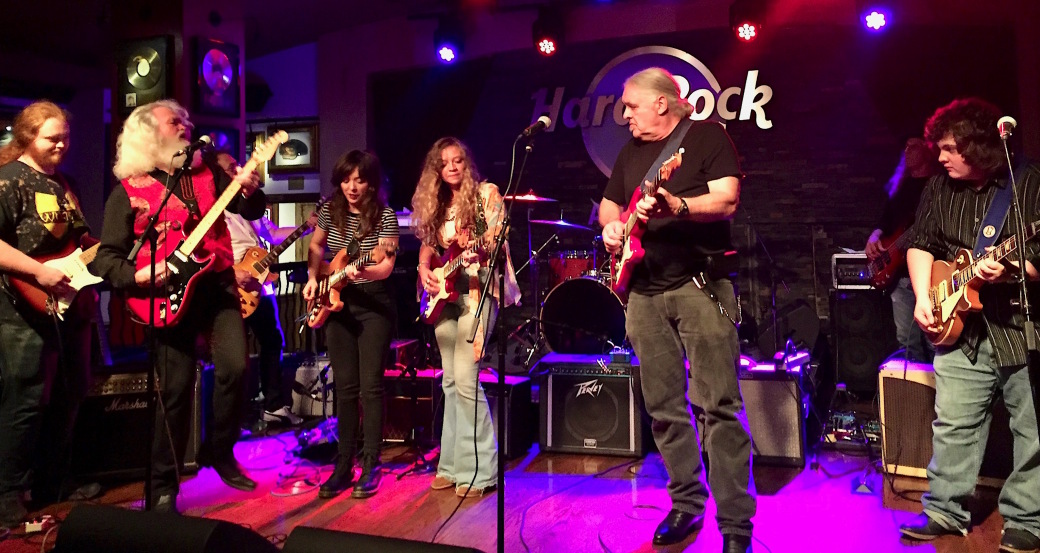 “It sure came out of nowhere,” Roger Wilson says of Guitarclectic, the guitar fest held at the Hard Rock Cafe’s Velvet Underground concert venue Saturday, June 23. Acknowledging two of the other guitarists on the bill, he continues, “These guys, Spencer Kirkpatrick and Glenn Phillips, they were opening up big shows back in the day. They were like monsters when I was just thinking about it. They are some great players that have been mainstays in Atlanta, so I am extremely honored to have been chosen to be there. I also consider myself fortunate to still be standing with many of them. I'm sure it will be a great reunion.”

A great evening it was, seeing guitarists Phillips, Kirkpatrick, Wilson, and George Price sharing the bill, just as it was to witness some of Atlanta’s newer guitar players.

Opening the show was Reese Boyd, a guitarist still in his teens who has already established himself in the north Atlanta jam band scene. Playing since the age of four, Boyd chose three covers to introduce himself — “Badge,” “Have a Cigar,” and “(Don’t Fear) the Reaper” — songs which didn’t offer any glimpse of his songwriting ability, but certainly displayed his dexterity on the fret board. A first-rate house band of veteran players — drummer Steve Pace (Hydra, Krokus, Whitford/St. Holmes), bassist Gary Gilbert (Kerry Livgren/Kansas), and David Cook on keyboards — brought the songs to life, and allowed Boyd to express himself in a musical setting he’s probably never experienced. Earlier in the week, having witnessed Boyd at rehearsals, Kirkpatrick observed, “He’s a fine player who, I think, will be around for a good while.”

Next up were the Pussywillows. Usually a full band, as they had been the night before, performing at the Star Bar, founding members Hannah Zale (vocals) and Carly Gibson (guitar) took to the stage as a duo — and they killed it. Bringing an other-worldliness to what was primarily a night of six-string rock ’n’ blues, their theatrics and song sensibilities certainly offered a demarcation between the old and the new, while Gibson demonstrated her prowess on guitar.

While he’s no stranger to fans of guitar-driven blues rock, Roger Wilson’s Atlanta appearances have taken a back seat to his regular gigging outside the metro area. Backed by the house band — forget Paul Shaffer and the World’s Most Dangerous Band, these guys were in the pocket — Wilson’s six-stringed assault was ferocious, whether in his rousing tribute to the late Danny Gatton or his soaring take on Jimi Hendrix’s version of Bob Dylan’s “All Along the Watchtower.”

This event, advertised as “Smiley’s Unique Music Presents: Glenn Phillips hosts ‘Guitarclectic,” was originally an idea of Phillips’ to bring together Atlanta guitarists, expanded upon by promoter Larry Hurley to include new players on the scene. As host, Phillips served as emcee, but, with Hurley unable to attend the show, Phillips was also stage manager, road crew, and timekeeper. Yet, when he took the stage with his band — bassist Bill Rea, drummer John Boissiere, and guitarist/keyboardist and vocalist Jeff Calder — any stress from his multitasking was left in the wings. Whether performing one of his energetic exercises in guitar pyrotechnics, or a cover like Fleetwood Mac’s enigmatic “Oh Well,” Phillips and band blasted into the stratosphere and beyond.

For most guitarists, the GPB might have been a hard act to follow, but for Moses Mo and the Real Cool Band, delivering a scorching set of hot rhythm ’n’ blues, it was nothing more than a funkified, nonstop action party. Mo effortlessly maintained a calm and peaceful center, while everyone onstage exploded around him. The audience was moving and grooving, too.

With 50 years of experience behind him, George Price is the one guitarist with whom I was least familiar. Hard to believe, with his precise licks and on-target leads. Price, also backed by the house band, smiled contagiously as he led them through a set featuring his originals, among them a nod to Darwin’s in Marietta (where he is a regular), and a more personal and introspective “Things I Should Have Said.”

Before the much-anticipated jam, the Jesse Williams Band took the stage. While the singer/guitarist has a hard-hitting band, she offered tasteful and subtle guitar work to back up her soulful vocals.

For the finale, guitarist Spencer Kirkpatrick finally took the stage, his blonde Gibson Sunburst Les Paul having held a spot for him onstage all night long. Backed by the house band, with Roger Wilson and Reese Boyd joining him on guitar, Kirkpatrick opened, appropriately enough, with Blind Willie McTell’s “Statesboro Blues.” Whether it was an intentional homage to the Atlanta bluesman who came before them all, I’m not sure, but Kirkpatrick’s playing made it easy to understand why, earlier that night, Phillips claimed him to be “the best guitarist I’ve ever seen,” while Wilson’s slide playing conjured another guitar master, Duane Allman. After a stinging version of “Hey Joe,” Price returned to the stage, leading them through “Black Magic Woman” and “Sultans of Swing.” But rather than riffing to the bluesier, original version of the Fleetwood Mac song, the guitarists delivered a beautiful and majestic full take on Santana’s version. The Dire Straits follow-up was a raving six-string romp that allowed each player to stretch out. It was fun. It was unexpected. And it conveyed the camaraderie and love that was such a part of the entire evening.

Musicians shifted, Gibson and Williams plugged in their guitars, and Cook started “With A Little Help From My Friends” on the keyboard, forgoing the Beatles campiness of the original for echoes of the heavier, more soulful version by Joe Cocker that still stands as a defining moment of the Woodstock generation. With time running out, and the players having already stretched the boundaries of the usually-covered guitar songs, one could only imagine what was next. Still standing on the sidelines, Kirkpatrick glanced at Pace, and the two launched into the double-barreled assault of “Goin’ Down,” the Don Nix song Hydra made their own in the early ’70s, and with it, forever sealed their place in this city’s music history.

In an interview earlier in the week, Phillips told me, “When I discovered a live electrical outlet in Piedmont Park in 1968, the Hampton Grease Band started playing there every weekend, and it quickly turned into a gathering place for many great Atlanta bands with many great guitarists. Those shows gave us all a chance to connect with each other as well as with an audience that loved guitar-oriented music. It gave us all a chance to become part of a community.”

With Phillips once again facilitating the magic, Saturday night’s show at the Hard Rock Cafe did just that.

Otherwise dept. … Having taken some time off from live performances, Spencer Kirkpatrick has rallied the forces once again with Steve Pace, Benny Boynton, and Gary Doty as the Ancients. They’ve found a regular home at Buckeye’s Getaway off Chamblee-Tucker Road and at the Pappadeaux Seafood Kitchen on Jimmy Carter Blvd. This Saturday, June 30, Kirkpatrick and Pace find themselves aided and abetted by Guy Goodman, Deborah Reece and Tony Vaughn, better known collectively as the Roosters, at Buckeye’s Getaway for two sets starting at 9 p.m. Bring your dancing shoes — and an appetite for '60s deep cuts like you’re not used to hearing live.

Roots rock dept. … This Saturday morning Criminal Records in Little 5 Points opens its doors stocked with a recently-acquired collection of reggae records — over 600 pieces strong. Flip through some of them here.

Linda Mitchell on her ‘spirit animals’ | more...
Search for more by Tony Paris