Photo credit: Courtesy Tiny House Atlanta
INNOVATION IMAGINATION:“What we need is to be able to be creative with our space and use our space well.” — Will Johnston
By Lauren Leathers Monday September 3, 2018 05:00 AM EDT

This past Sunday I began my usual routine of sitting in bed and browsing the Internet. As I proceeded deeper into the black hole of random Internet searches including dog spaghetti-eating competitions and “Kitchen Nightmares” reruns, I came across a page dedicated to tiny but livable houses. Once the long drawn-out “aww” subsided that came with clicking through the photographs of diminutive kitchens and living rooms, I dug a little deeper to find that these tiny houses represent something much bigger — a tiny house movement.

Tiny House Atlanta, a program for the nonprofit organization MicroLife Institute, raises public awareness about the tiny house movement. The organization says that bigger isn’t always better for the people of Atlanta, and is gaining momentum by creating walkable, sustainable, micro-hood communities. On Sept. 29-30, the third annual Tiny House Festival will take place in downtown Decatur to educate Georgians on downsizing and sustainability.

Four years ago, Johnston made a spontaneous decision — the kind we all secretly desire at least a little bit. He quit his job, sold off the majority of his personal possessions, and made the drastic move to New Zealand to backpack and work in vineyards for three months. That’s where Johnson discovered the minimalist lifestyle.

“I saw smaller structures and a better community and attitude toward life,” Johnston says. “It wasn’t until I came back to the United States that I came across the tiny house movement. It was that mindset of not owning anything and being free — I carried that mindset into my next adventure of the tiny house world.”

By definition, a tiny house is (adorably) less than 400 square feet. The tiny house movement began in the ’90s. According to Johnston, 70 percent of America is going to be within a city in the next 20-30 years. Could tiny homes solve the problem of how to house the increasing amount of people flooding toward the urban lifestyle?

A few tiny homes have settled into ATL and are rented out nightly for curious visitors. Dubbed the “hipster” tiny house, one East Atlanta Village tiny home goes for $50 a night on Airbnb and is walking distance from all the offerings of the EAV community — 529 Bar, Emerald City Bagels, etc. Another miniature home is located in the Edgewood community, one mile from Little 5 Points.

While there are rental options available for tiny houses, Johnston hopes the homes will soon become an option for those looking to live an urban lifestyle without breaking the bank. To him, bigger doesn’t mean better.

“We have a negative connotation in America that if you’re living in a smaller space you’re not successful, or you’re poor, or not doing well in life,” Johnston says. “But to me, people living in smaller spaces realize that there’s more to life than collecting stuff. I believe that small spaces propel people forward. You’re not supposed to live in your home, you’re supposed to live out in the community and in the world.” 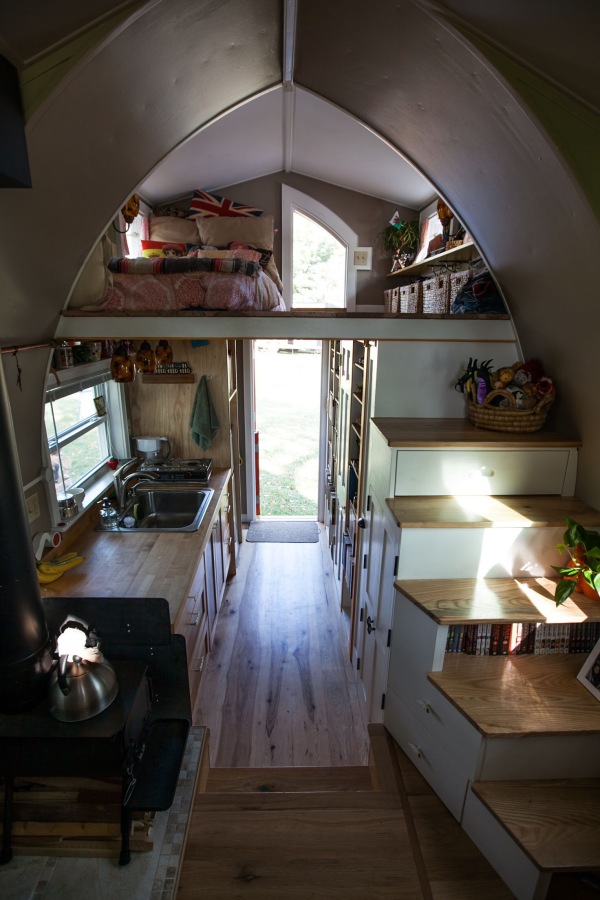 
Johnston and the rest of the crew at Tiny House Atlanta are hard at work advocating for Atlanta ordinance changes. Last year, the Atlanta City Council voted on and approved an amendment to city zoning laws that allows accessory dwelling units, or a secondary house or apartment that shares the building lot of a primary house. According to the Atlanta Journal Constitution, the amendment affects R-5 — two-family residential — zoning, which includes Grant Park, Old Fourth Ward, Edgewood, Candler Park, and Inman Park. Now, the Council is looking at expanding ordinances that deal with zoning, which would allow for diversification of more housing options.

“We have a variety of spaces that I feel would fit the needs of different people, but we also have overlay expectations of taxes, zoning codes, and other things that keep us from allowing a more diverse housing option that still is a part of the community — that still pays taxes and creates great space,” Johnston says. “What we need is to be able to be creative with our space and use our space well.”

Johnston sees tiny homes being built in older neighborhoods, specifically in southwest Atlanta and areas that look for progressive housing options, in the future.

“There’s currently an uproar about the affordability of homes around the Beltline, but there’s ways to create programs that would inspire people to build and look at other housing options,” he says.

Of course, the biggest concern for the people of Atlanta is the price to live this tiny life. Johnston says it’s actually much less costly than living in the typical home. In fact, internet lifestyle blog The Tiny Life reports the average cost to build a standardized home is approximately $272,000, while the average cost to build a tiny home can be as low as $23,000.

“I see this as an option, and I’m not saying everyone has to live tiny,” Johnston says. “I just want it to be seen as a legitimate option for people who want to live like this.”

While privacy and living big is the preferred method of life for some, Johnston believes there’s more to life than seclusion and material possessions. He believes Americans would be much happier if they interacted with each other more. If we saw what was out there, maybe, just maybe, we’d be more connected.