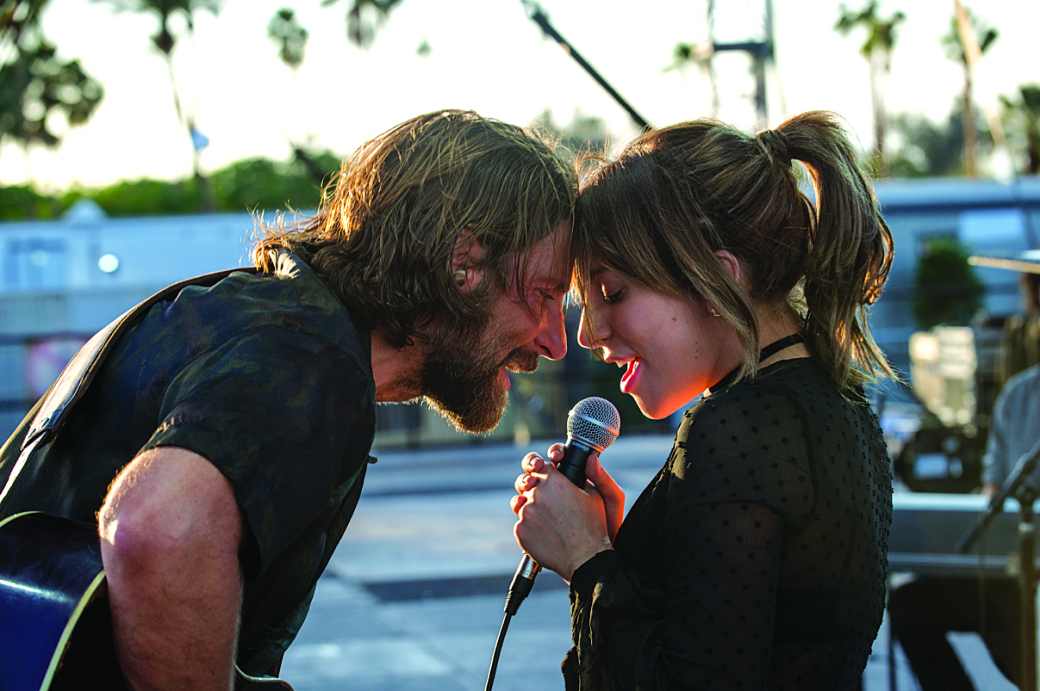 Bradley Cooper’s remake of the romantic showbiz melodrama A Star is Born proves that big movies require big ambitions. Now in its fourth incarnation, if A Star is Born weren’t so entertaining and sensitive, it would seem like a stunning act of hubris. Or two acts, really.

First, the film gives pop diva Lady Gaga the chance to present herself as a genuine Hollywood leading lady, following jokey cameos and “American Horror Story” guest spots. In A Star is Born’s love story between two celebrity artists, one rising as the other declines, Gaga takes on into a role played by iconic actress-singers of past generations, Judy Garland in 1954 and Barbra Streisand in 1976. It’s like she’s pulling up a chair to the grown-ups table.

Meanwhile, Cooper isn’t just the film’s co-star and director, but produced it, co-wrote its screenplay, worked on some of its original songs, and does his own singing. If being an actor-singer is a “double threat,” how many threats is that?

Seldom do projects take such ambitious swings and succeed so well, without feeling like ego trips. One of the impressive things about A Star is Born is that Cooper makes its outsized tale of love, fame, and substance abuse feel grounded, particularly in its whirlwind first half. Cooper plays roots rocker Jackson Maine, whose anthemic performances prove reminiscent of country music’s Sturgill Simpson. Jackson commands arena shows while struggling with alcohol, painkillers, and failing hearing.

One night Jackson leaves his limo seeking a drink in a random bar: when he notices that it’s drag night, he just smiles and shrugs, where a less generous film would make a gay panic joke. When former waitress Ally (Lady Gaga) takes the stage for a powerhouse version of Edith Piaf’s “La Vie en rose,” Jackson’s instantly smitten.

He visits Ally backstage and they strike instant sparks. At one point, he leans in and peels off one of her fake eyelashes, a moment of both personal intimacy and symbolic relevance: Jackson’s openly ambivalent about show-business artifice, which becomes a source of tension when Ally’s increasingly glam career takes off later in the film.

Jackson also proves sincerely interested in Ally’s songwriting efforts, and the day after she sings a few verses in a parking lot, he arranges to sing with her at one of her shows. Their duets superbly use the emotional impact of song to demonstrate their feelings for each other, just as their separate numbers reflect Jackson’s sense of isolation and Ally’s self-actualization.

Cooper directs himself in one of his richest and most likable performances, eschewing the aggressive smarm and sarcasm of his usual roles. With a gravelly voice that suggests years of hard use, Jackson has a rock star’s self-awareness while seeming like a nice guy, his alcoholism fueling his implosive, self-destructive behavior.

Compared to the provocative theatricality of her stage persona, Gaga plays Ally with girl-from-the-block realism. You’re aware of the concentration going into the performance — she’s very, very focused on seeming natural — but Ally’s never less than compelling as she tries to pursue her career while dealing with Jackson’s demons.

And one could not imagine a better cinematic showcase for Gaga as a singer: You can even imagine her making a credible run at a Best Actress Oscar, charged by the energy of her aria-like solos. Like Cooper, throughout the film she takes big swings and gets big hits.

Pretty scary, eh kids? Halloween is coming up, both the holiday and latest installment in the enduring horror franchise. Director David Gordon Green, known for both prestige dramas and comedies like Pineapple Express revives masked murderer Michael Myers in a sequel due on Oct. 19.

For a refresher in series’ lore, on Oct. 10 Landmark Midtown Art Cinema screens John Carpenter’s original Halloween, a sleeper hit that defined the slasher genre. Then, on Oct. 20, the Plaza Theatre takes a stab by presenting Halloween H20: 20 Years Later, a follow-up that brought back original scream queen Jamie Lee Curtis. Together, the three films give viewers a chance to see how a franchise evolves at 20-year intervals.

The Plaza screens several venerable shockers throughout the month. Oct. 5 presents the weird, nightmarish Phantasm, the hilarious, gory Re-Animator, and satirical Bubba-Hotep, which stars Bruce Campbell as an elderly Elvis Presley fighting a mummy at a nursing home. Oct. 12 offers Wes Craven’s The Hills Have Eyes from 1977, while Oct. 18 sees Carnival of Souls, the kind of cult film where the low budget only magnifies the mood.
Finally, on Oct. 24-25, Fathom Events screens the remastered version of Night of the Living Dead at Atlantic Station, Regal Hollywood 24 and other participating theaters. Shockingly gory in its day, George Romero’s tale of ordinary people under siege from the undead set the template for decades of zombie apocalypses. The genre just doesn’t seem to die.