GRAZING: A kiss in the screamhouse 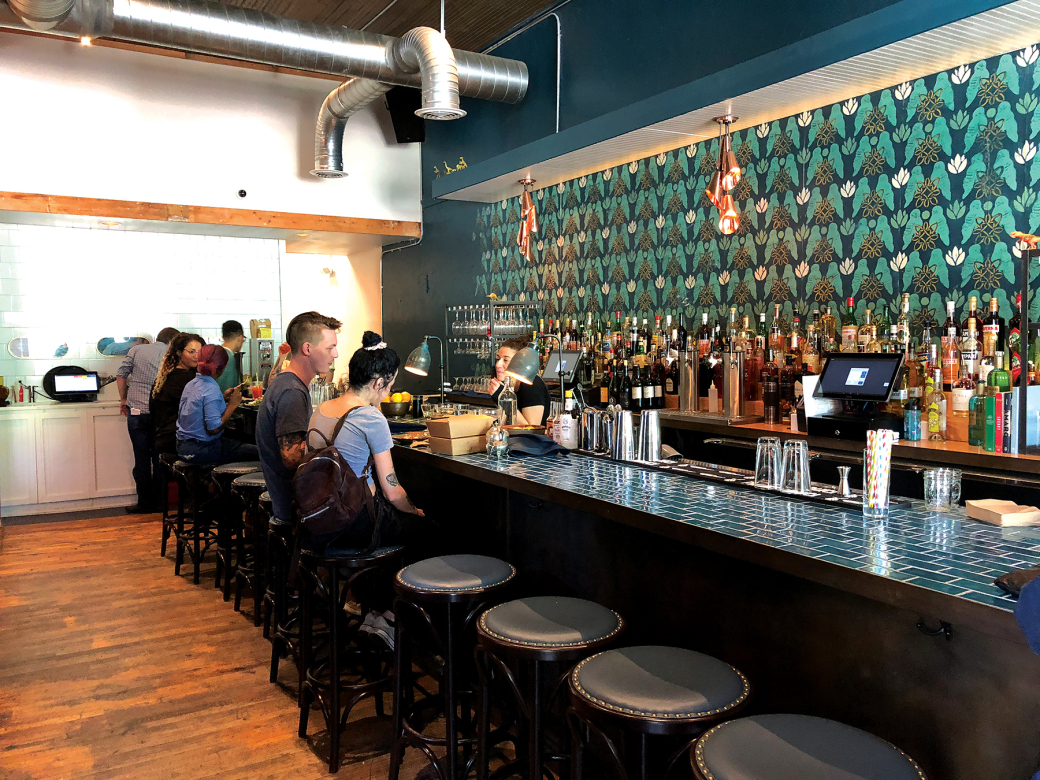 Photo credit: Cliff Bostock
BEHIND THE CURTAIN: The bar to pay attention to.
By Cliff Bostock Thursday November 1, 2018 11:54 am EDT

When I opened the door of Banshee, the newest restaurant in East Atlanta Village, I thought I had immediately solved the mystery of its name. Banshees, you may recall from your Halloween studies, are female spirits from Irish folklore who show up screaming and crying when someone is about to die. Well, nobody in sight was dying, but the restaurant was so noisy that a friend and I put our name on the list and ran out the door to listen to the restful sounds of traffic. We waited about 20 minutes and then decided to go elsewhere. But I returned a few days later for Sunday brunch. It was comparatively empty, all was quiet, and the food was fabulously fit for the living.

Three of Banshee’s owners are former employees of the Ford Fry empire: Nolan Wynn, Faielle Stocco, and Peter Chvala. A fourth, Katie McDonald, is the former manager of the Wrecking Bar Brewpub. Elizabeth Ingram, noted for her dramatic design at the Golden Eagle, has created a stylish space that employs pops of royal blue to enliven the otherwise sedate brick and cement walls, big windows, hardwood floors, and a wood-slat ceiling. The most dramatic feature is the wall of blue velvet curtains that separates the dining room from the bar, which is backed by a stenciled mural of abstracted owls in blue, gold, and turquoise.

Wynn’s menu is brief and seasonal. Dishes are grouped under the headings Begin (apps), Continue (entrees), Growing Now (seasonal sides), and Finish (dessert). These labels of course reflect the ubiquitous trend of confusing diners about portions. For example, Banshee’s brunch includes a Wagyu beef salad in its Continue group, but it’s in the Begin group at dinner for the same price ($14). Whatever! You should feel perfectly fine here (and elsewhere) to order any dish on the menu to share at any time during your meal.

So, at brunch, two of us ordered three items from the Continue group and one from the Begin group and shared all of them. It was left to us to divide them, no serving spoons provided. My favorite dish was a beautiful play on the classic iceberg wedge with blue cheese dressing. The wedges were somehow arranged like a cake layer that was frosted with a gorgonzola dressing. On top were slices of grilled plums and candied beets, crumbled cashews, and sprigs of dill. If you’re worried that the dressing is too heavy, don’t. The toppings were bittersweet.

My next fave was a fried chicken sandwich with a distinctly Southeast Asian kick. From the shape and color of the meat, we presumed it was a breast — a remarkably moist, juicy breast in a crunchy coating. Our servers told us it was actually a boneless thigh. We didn’t argue because our mouths were too busy devouring the sandwich, made with a sesame bun lightly smeared with a blend of peanut butter and Sriracha. Pickled carrots garnished the chicken. Yes, alright, it was a thigh. 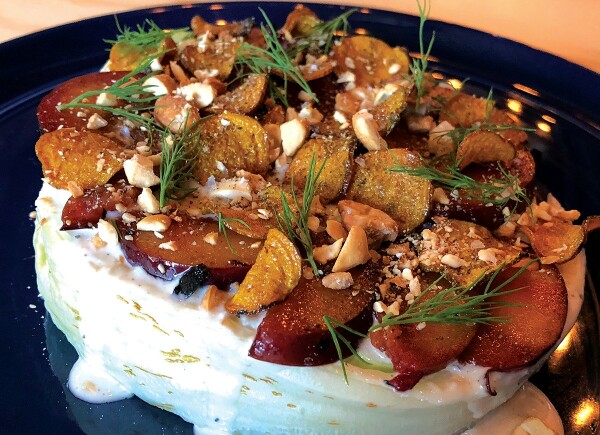 The one dish we ordered from the Begin section of the menu was a fig tartine. I never say no to figs, one of my favorite addictive substances. These were fresh, sliced, and placed atop some thin pastry spread with mascarpone. Then they were drizzled with coffee-tinged caramel sauce and scattered with some bits of apparently candied hazelnuts. Honestly, the pastry needed to be a bit heavier to accommodate the slippery textures, which turned fork use into a balancing act. I’m not sure I’d actually call this a tartine.


My least favorite dish was the heartiest  — a carbonara so full of fennel sausage and sage gremolata that every other flavor and texture, including the noodles, disappeared. I have to say I think this was a purely personal reaction, given that my fairly discerning companion devoured two thirds of the dish with the zeal of a Trump Republican chewing up the truth.

I finally did inquire how the name Banshee came about. I had two guesses. One was that Chef Wynn had come to like high-decibel cooking during his stint at No. 246, seriously ranked one of the noisiest restaurants in the Metro area. My other guess was that the name paid homage to the partying patrons of My Sister’s Room, the legendary lesbian bar that used to occupy the space. But a staff member — likely one of the owners — told a sweeter story. She and her three co-owners, longtime friends, had been talking about opening their own restaurant for years. They finally decided to defy their wailing, bansheelike fears and make a move. They did the right thing! 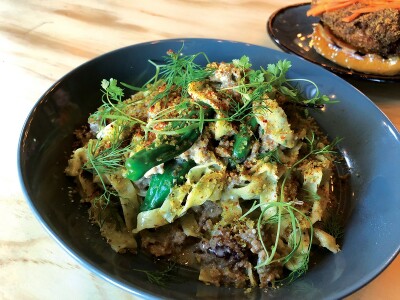 THE HEARTY ONE: Carbonara with fennel sausage and sage gremolata over noodles. Photo by Cliff Bostock.

Banshee’s prices are higher than the typical restaurant in the neighborhood, but well worth it. It’s also likely to end up ranking as a very popular bar. I don’t drink, so I can’t tell you anything germane, except that my companion enjoyed his tequila-based cocktail with a name, Stately Hag, that seems calculated to please a banshee. The restaurant is open late, midnight and beyond, as are several other places in the neighborhood. East Atlanta Village has been famous as a late-night hangout for restaurant employees since 2011 when Angus Brown (now deceased) and Nhan Le opened the renowned Octopus Bar inside nearby So Ba. Like some others, Banshee will offer a late-night menu. Finally, you need to know the restaurant only seats about 60 people, including the bar, and reservations are taken.

MANY WORLDS, ONE PLACE: So, where did my friend and I go when we fled the noise at Banshee? To We Suki Suki, of course. This self-styled “Global Grub Collective” is a chaotic, narrow, dirt-cheap food hall that is an antidote to the sometimes oppressively fashionable Krog Street and Ponce City markets. It’s not even on the Beltline!

We Suki Suki had its start about five years ago when Quynh Trinh, known as “Q,” opened a tiny shop to sell banh mi, classic Vietnamese sub-style sandwiches, and pho, the noodle soup that has become a national craze. A year or so later, she expanded into the neighboring space and, ever since, it’s been home to an ever-changing collective of four or five international food booths. It’s the kind of place that would give Donald Trump a heart attack. All that immigrant food and not a Big Mac in sight! Nor a gold faucet! 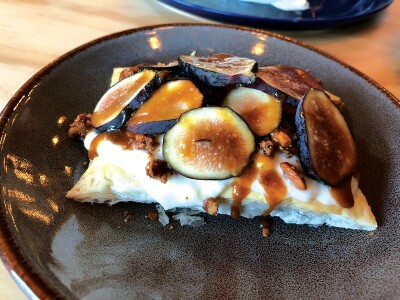 My friend and I both feasted on a spicy chicken ramen from Lifting Noodle. Authentic ramen, of course, is as popular as pho these days, and this is seriously one of the best I’ve sampled recently. We also shared a ridiculous quantity of snacks from the pan-Asian Mushi Ni, including a miraculously rich Malaysian roti roll overstuffed with duck confit; fried cauliflower; a bun stuffed with barbecued pork; and a crepe stuffed with something like Nutella, served with caramel sauce.


The booths here all seem to have different hours, different phone numbers, and, of course, different specialties. All booths are closed Sundays and Mondays. You can’t buy a banh mi after 3 p.m. Consult the We Suki Suki website for details. You can, by the way, easily concoct a vegetarian or vegan meal here, especially at Mushi Ni. Our table neighbors gilded the lily by smuggling in a bottle of vegan ranch dressing. Why veganize a cliché that needs to die?

GOTTA GO TO GATO: Regional Mexican food is the specialty of the latest weekend pop-up at Gato in Candler Park. The restaurant hosted the wildly popular Talat Market for about a year, and its chef has moved on to open his own restaurant. Now, Gato owner/chef Nicholas Stinson is taking over the kitchen himself with his own pop-up, Gato Nights.

I dined there on its first night and found the food mainly good, with a few glitches that have doubtlessly been worked out by now. My favorite was a sous-vide chicken set on the grill until brown and a bit crispy. Its flavors ranged from chipotle to a “burnt jalapeno powder.” I also liked the roasted, caramelized pork chunks in a complex green mole, served with orange, achiote-tinged tortillas.

The changing menu is quite limited, and you’re going to encounter that confusion about apps and entrees here too. So just plan to share everything. Also expect a wait. Hours are 6-10 p.m. Friday-Sunday. 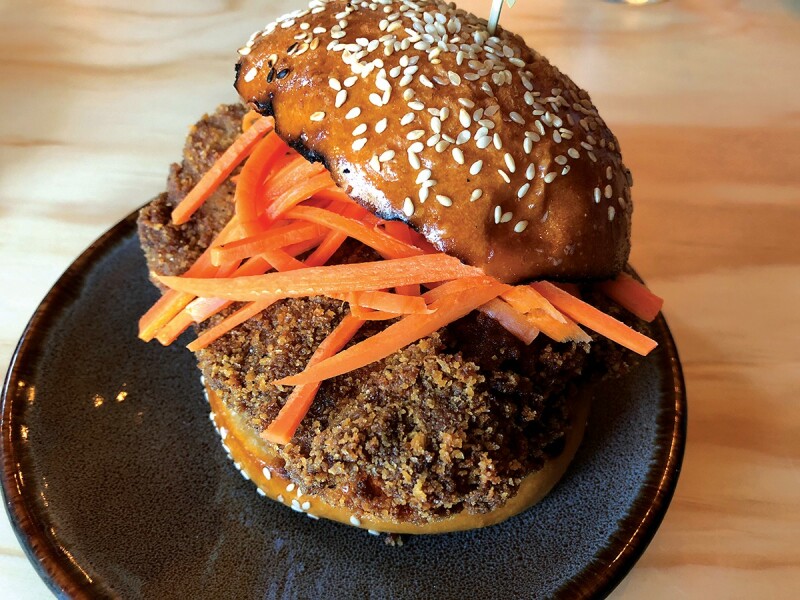 A SMALL REQUEST: Stop serving food on Styrofoam. Even if you’re using the variety that is supposedly biodegradable, it’s horrible to drag the usual plastic fork and knife across the squeaky surface. It’s even more horrible to bite into the stuff while you take a sip of coffee. And while you’re ditching that polymer poison, consider going all Starbucksy and banning plastic straws too. If you’ve got to use them, throw them in the recycling bin.