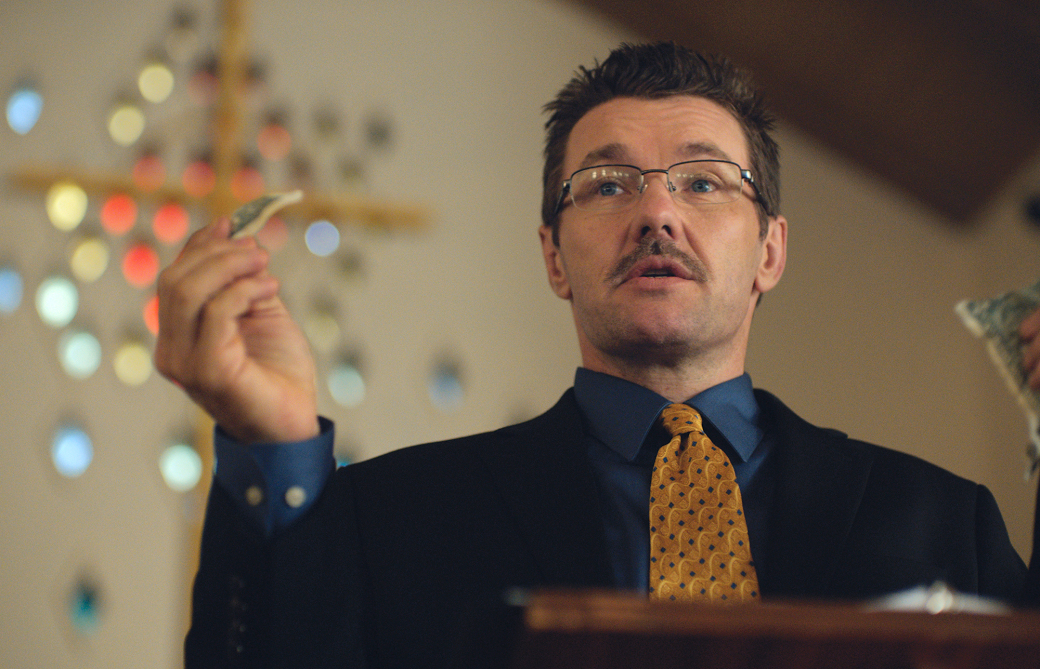 Photo credit: Courtesy of Focus Features
GET WITH THE PROGRAM: Writer and director Joel Edgerton plays the leader of a gay conversion program in ‘Boy Erased.
By Curt Holman Thursday November 1, 2018 05:55 PM EDT

Filmed in Atlanta but set in Arkansas, Boy Erased offers insight into how religious homophobia amid the American Bible Belt is more than a small-town phenomenon. The adaptation of Garrard Conley’s 2016 memoir feels firmly placed in the middle-class South, as college student Jared Eamons (Lucas Hedges) becomes forced to enroll in a gay conversion program.

Russell Crowe plays the titular boy’s father, a Baptist pastor and salesman at a Ford dealership who arrives at work declaring “Morning! Let your light shine!” When he and his wife (Nicole Kidman) hear rumors that their son may be gay, the good ol’ boy bonhomie drops and Dad sends Jared off to a church-sponsored program called Refuge to “cure” him.

As Refuge’s head therapist Victor Sykes, Australian writer/director Joel Edgerton proves almost hilariously louche, with spiky hair and a thin mustache. Boy Erased finds some welcome humor in the program’s frivolous particulars, which suggest a combination of Sunday school, gender stereotyping, and exercises borrowed from TV therapists. But the impact on Jared and his classmates is no laughing matter, and Hedges ably conveys the character’s mixture of self-loathing, rage at adult authority figures, and gradual acceptance of his sexual identity.

It’s serious stuff, and Edgerton’s direction maintains a respectful tone, but Boy Erased fails to hit hard enough. Kidman and Crowe give convincing portrayals of churchy Southerners struggling to reconcile their faith with their love for their son, but distract from the film’s most compelling aspects. Jared’s experiences in and out of the program, while difficult and complicated, don’t measure up to the harshness of some of his fellows’ treatment, with intimations of confinement and brainwashing.

While Edgerton’s adaptation stayss admirably faithful to the spirit of its source, given the challenges to gay issues in contemporary politics, Boy Erased weakens the message.

Take My Breath Away: Famously dark humorist Michael O’Donoghue used to say that getting a laugh was the lowest form of humor. He may have been kidding, but director Luca Guadagnino seems intent on approaching his remake of Suspiria in a similar vein: with the idea that scaring people is the lowest form of horror.

Released in 1977, Dario Argentino’s original horror film plays like a fever dream, delirious in its the surreal colors, art direction, and violence, as well as Goblin’s hypnotic score. But Suspiria’s story, about an innocent American woman joining a sinister Berlin dance company, was never its strength. For the remake, Guadagnino fleshes out the characterizations and adds subplots about Germany grappling with the legacy of World War II and 1970s domestic terrorism. The American (Dakota Johnson) now has an Amish backstory, as well as a more complex relationship with the company’s renowned choreographer (Tilda Swinton), who may be the leader of a coven of witches.

Guadagnino just received a Best Director Oscar nominee for 2017’s Call Me By Your Name, and it should have been fascinating to see his new film in conversation with the original, trying to be cerebral as well as sensual, with Radiohead’s Thom Yorke providing the soundtrack. Unfortunately, at two and a half hours (almost a full hour longer than Argentino’s film), the new Suspiria proves often inert, with murky plotting and an extended storyline about an elderly male psychiatrist (credited to “Lutz Ebersdorf” but Swinton in octogenarian makeup) investigating a dancer’s disappearance.

Guadagnino’s Suspiria cuts loose in its last 20 minutes, offering the kind of lurid craftsmanship fans of Italian horror have been waiting for. Otherwise it only fitfully comes alive, mostly in the rehearsal scenes. It leaves you wishing Guadagnino had amputated all the politics and vague mumbo-jumbo aimed at providing Black Swan-style melodrama about a creepy dance school. Apart from Swinton’s arresting performance(s), the best thing about Suspiria is its reminder of the original’s haunting power.

Coming attractions: Speaking of scary things in November, the Buried Alive Film Festival takes place Nov. 14-18 at 7 Stages. The 13th annual celebration of spooky cinema includes a screening of the 1920 classic The Golem, with a live soundtrack by Samadha; as well as 1987’s beloved The Lost Boys, featuring a performance by Blast Off Burlesque.

Along with multiple feature films, the lineup includes multiple shorts programs, which could be particularly nerve-wracking: Contemporary horror shorts have often become effective delivery systems for jump scares and inventive set pieces. The Buried Alive Film Festival (buriedalivefilmfest.com) opens with the Sinema Challenge, screening the output of intrepid filmmakers given only 13 days to make a scary short. Now that’s brave.