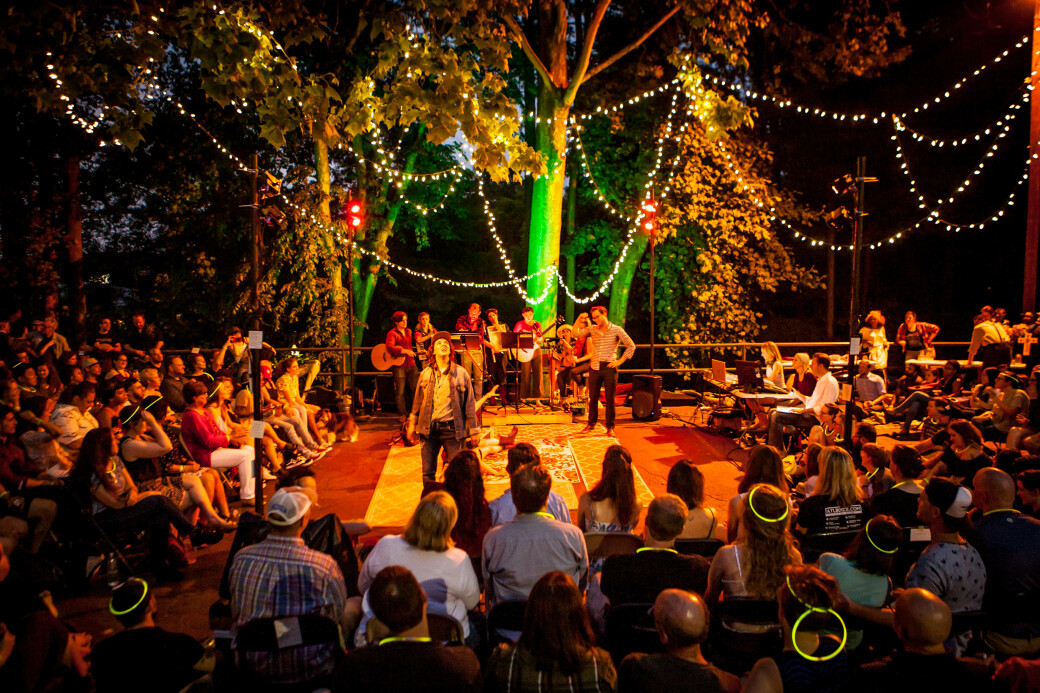 This Monday, Dec. 10, at 8 p.m., Orpheus Brewing will host a raucous birthday party for the troupe, who will be performing live scenes from William Shakespeare’s A Midsummer Night’s Dream, Richard III, Romeo and Juliet, and “Much Ado About Nothing.” Per the troupe’s usual fare, the scenes will be performed on-the-fly with minimal rehearsal, fueled by a pint or two of liquid courage. The troupe has gained a ravenous cult following in its short time, and earned Creative Loafing’s critic award for Best Local Play earlier this year.

Tipsy blunders are common in Shakespeare on Draught, but always played up for laughs and entertainment, encouraging common “groundlings” in the audience to heckle and take a drink when the actors are forced to call for a line or creatively adlib their way through a scene. It’s a unifying experience that shatters the high-brow and stuffy perception of live theater, taking glory in its own imperfection. “There are zero boundaries between the actors and our groundlings who are watching,” says Elizabeth Miller, the troupe’s artistic director and founder. “We give them props. We talk to them and they talk back. They boo and cheer and whistle and heckle and hiss and are as much a part of creating the evening as we are.”

Even when mistakes are made, it’s far from amateur-hour. Miller and company are experienced stage performers, and it takes skill to perform complex and tongue-twisting Shakespeare plays from memory — especially a hazy one. Actors who are used to a lengthy rehearsal processes and multiple performances only get one or two brief run-throughs of the script, and each performance is one night only. “On one level, I think our audiences really dig that about us. It's pretty fun to watch actors messing up and not taking themselves too seriously, especially when we've made it into a bit of a drinking game,” Miller says. “On a deeper level though, our actors start making bigger, bolder, more exciting choices. It's almost a ‘fight or flight’ response, and it's so much fun to work like that as an actor. A lot of the acting choices we've made on the fly during our shows live in legend amongst the company.”

Early performances of Shakespeare on Draught were established at Cabbagetown’s 97 Estoria, a dive bar with the kind of intimate and inebriated audience that Shakespeare himself was originally writing for. After growing a larger cult of loyal attendees, the troupe found a second home at Orpheus Brewing and began performing at the panhellenic-themed brewery near Piedmont Park. “Shakespeare on Draught represents what we've always tried to do at Orpheus — bring people together with beer and stories,” says Orpheus brewmaster and president Jason Pellett. “They need each other, and that's rarely as evident as when hundreds of people come together in a brewery parking lot to experience a raucous, slightly drunk, Shakespeare play in the kind of loose setting they were written for.”

In addition to Orpheus’s year-round and seasonal beers on draft, there will also be food available for purchase on-site and a raffle with prizes including iconic props from past shows and a set of commemorative beer glasses. The troupe will be announcing its 2019 season, including a special show that will be decided by those in attendance at the anniversary that very night.

The Great Southern Beer Fest isn’t until April 27, 2019, so it’s a little early to be talking about it... but we don’t want you to miss the first round of $25 cheapo tickets, which go on sale this Friday, Dec. 7. You know the beer festival drill by now — more than 75 breweries from all over Georgia and other Southern states will be pouring samples of their finest craft beers from booths scattered around Virginia-Highlands’ John Howell Park. This beer fest is hootnannified with live country rock music, commemorative full-size mason jars, and Southern soul food. Early tickets are available here.

The very next day, Monday Night Garage will release Como Te Llamas, an homage to the sweet, rice-based Latin American beverage, horchata. This tequila barrel-aged imperial stout is spiced with cinnamon, nutmeg and brown sugar, thickened with lactose and vanilla for a deep and filling stout body at a warming 12.5 percent ABV. It’ll be available at the Garage in bottles, and can be reserved on CraftCellr.