SCREEN TIME: “Vice” riffs on political power via the career of Dick Cheney 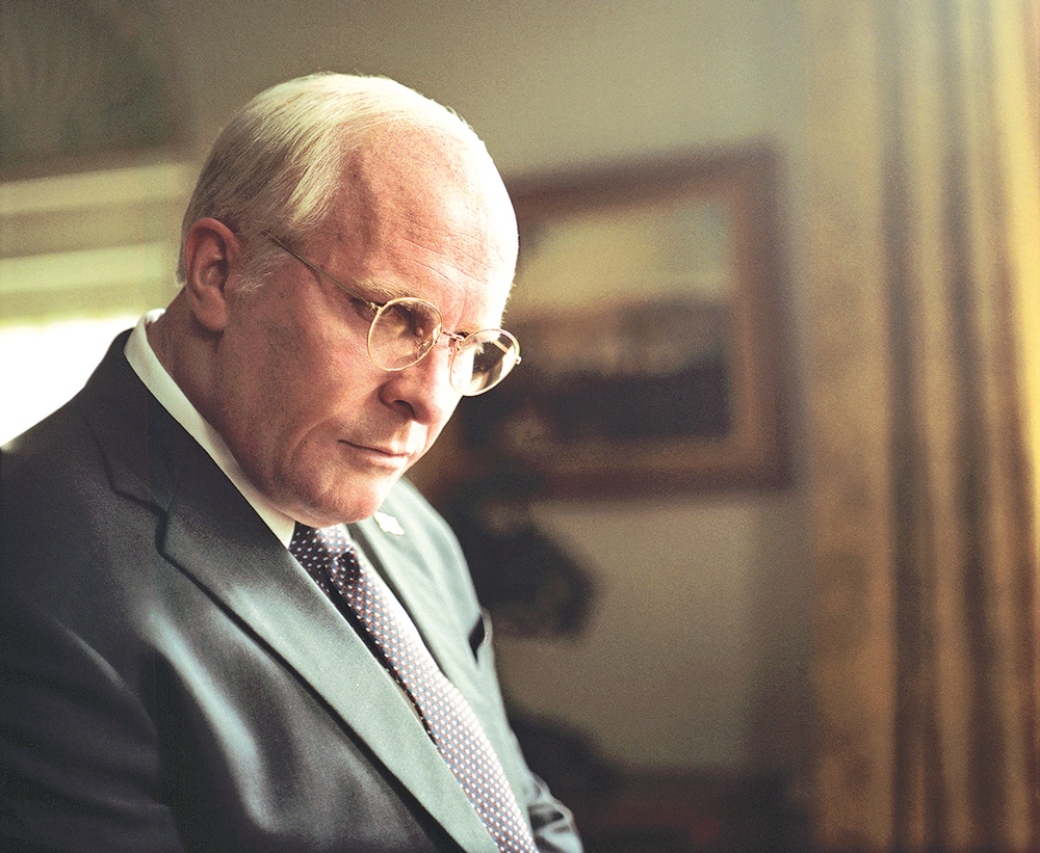 In Vice, Christian Bale seems to be having more fun playing former Vice President Dick Cheney than he’s had with any role since American Psycho. This in spite of, or maybe because of, his physical transformation that involves a thickened waist and the thinnest of comb-overs.

As one of the most taciturn yet powerful figures in modern American history, Cheney affords Bale little in the way of big, juicy speeches, or even occasions to raise his voice, and that seems to be just how the actor likes it. Bale adds a little charge to the way he answers fate-of-the-nation questions with a bland grunt. He finds the deadpan comedy when he pauses in a meeting with cohorts to declare from the corner of his mouth, “Sorry, uh, everyone, I, uh, think I should go to the hospital,” during a cardiac episode.

The film’s snarky sense of humor is one of the signals that Vice is no conventional biographical film. It follows the outline of old-fashioned biopics by tracking a famous person’s career from youth to old age, giving the make-up artists a workout along the way. The most successful recent biopics tend to focus on a narrow but eventful window of time, like Darkest Hour’s run-up to the Dunkirk evacuation.

Vice finds a pivotal moment in Cheney’s early 20s when he gets a DUI as a young Wyoming lineman. An ultimatum from his wife Lynne (an effective but underused Amy Adams) prompts him to change his ways with a career in Washington politics, and he quickly finds a mentor in the brash Donald Rumsfeld (Steve Carell).

After serving in multiple presidential administrations, Cheney seems on the verge of retirement when the George W. Bush campaign gives him an opportunity to craft a new world order. Sam Rockwell avoids the easy clichés in playing Dubya, conveying a disinterest in governance but a crafty concern with his more personal agendas. Cast members doing iffy impressions of political figures include Tyler Perry as an upstanding, disappointed Colin Powell.

Vice focuses less on what makes the characters tick and more about the changes to American political norms that, the film alleges, Cheney either directed or abetted. The film continues the fascinating evolution of director Adam McKay, who began by helming silly Will Ferrell vehicles like Anchorman and has changed focus to complex — yet still funny — films about the corruption of American institutions. In some ways, Vice plays like a prequel to The Big Short, McKay’s light-hearted autopsy of the 2008 financial crash, with similarly playful music cues, montages, and cameos, and looks to be a comparable Oscar contender.

So, while Vice might come up short in exploring Cheney’s psychology, it us-es his career as a de facto essay on topics like “Unitary Executive Theory,” the increase in presidential powers, and the U.S. approach to privacy and torture during the War on Terror. The film views potentially dry, depressing material through a lens of satire: When Cheney and Rumsfeld consider the administration’s new war powers, Alfred Molina slinks into view as a waiter at a fancy restaurant to walk them through the menu: “We’re also offering an extraordinary rendition…” Jesse Plemons, as the film’s narrator, lays out some of this material while keeping his personal connection to Cheney secret until the end.

Alternately amusing and infuriating, Vice openly acknowledges that some of its content is speculation. When Cheney chats with Lynne about whether he should be W.’s vice president, the narrator sighs that it would be nice if they gave speeches about their motivations — and then the couple shifts into a quasi-Shakespearean dialogue worthy of Macbeth and his wife. Even if you passionately agree with the film’s viewpoint, Vice seems to encourage you to take its presentation with a grain of salt, or at least do your own follow-up research. The fact-checking articles alone will be fascinating.


And the winners are: In its second year, the Atlanta Film Critics Circle (of which I’m a member) has named its awards for the best films of 2018, with The Favourite proving, uh, favored in the categories of Best Actress (Olivia Colman), Best Supporting Actress (Emma Stone), Best Ensemble, and Best Screenplay. Its Top 10 films are: 1. The Favourite. 2. A Star is Born. 3. Roma. 4. A Quiet Place. 5. First Reformed. 6. Eighth Grade. 7. BlacKkKlansman. 8. First Man tied with Won’t You Be My Neighbor? and 10. Black Panther. You can see the full list here.