Glam times, goth times, you know they’ve had their share 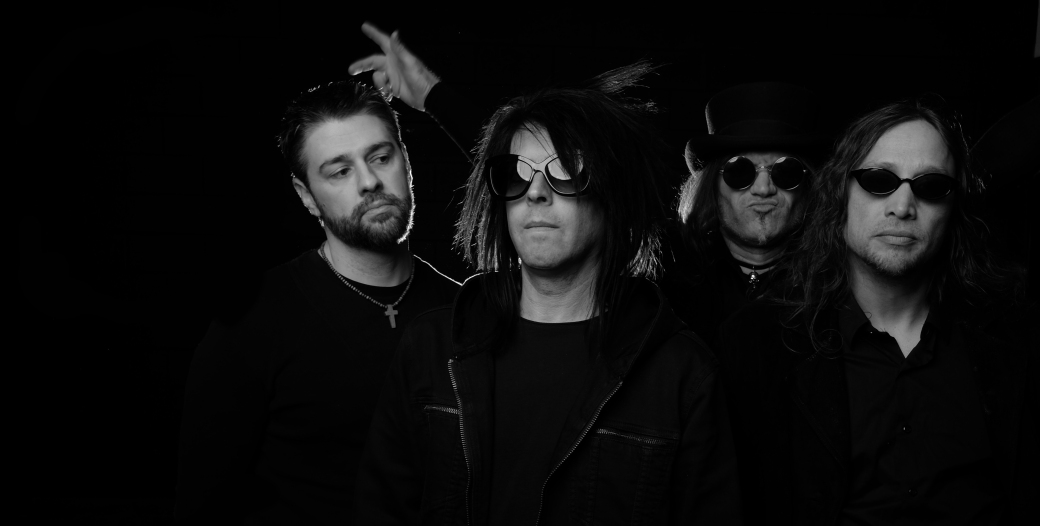 It can be argued that glam rock never really went away. What is goth other than a permutation of the street hustle David Bowie, the New York Dolls and Mott The Hoople gave listeners, shot up with a heavy dose of punk? Indeed, both Bauhaus and The Cure borrowed elements from glam bands before them, though their lyrical content was certainly darker and more introspective, a nihilistic reflection of the post-punk times.

Today, Peter Murphy and David J. are paying tribute to their band Bauhaus; Ian Hunter is announcing a second Mott The Hoople “reunion”tour; Sylvain Sylvain is still talking trash with his vaudeville escapades; and David Bowie is probably selling more records than he ever did while he was alive.

It comes as no surprise that Darling Machine have regrouped. A mainstay of the Atlanta glam and goth scene at the turn of the century, the band celebrates the release of their new, self-titled LP, Darling Machine, with a show tonight at Vinyl, in the Center Stage complex. As reviewed in this column a few months ago, the album, “a self-described combination of  ‘old school goth and punk with (a) modern pop sensibility,’ is just that. ... A guitar heavy quartet, the group is more The Cult meets Gene Loves Jezebel than of the Specimen/Alien Sex Fiend, or even Bauhaus/Cure variety goth,” but with “a penchant for the pop hooks that pervaded the music of the latter two. Produced, mixed and engineered by Jeff Tomei, the music is menacing, not unlike Pleasure Club during its heyday.”

“I’ve said this from day one when we first decided to regroup Darling Machine, ‘This is not a reunion, this is a reconstruction,’” Vernon P. Love explains, regarding the reformation of the Atlanta band he fronted in the late ‘90s to 2002. “The current times brought this band back together — and the lyrical content of the songs mean as much, if not more, today, than when they were originally written.”

The idea of “getting the band back together,” Love laughs, had its genesis in original bassist Troy Portella getting snowed in at Love’s place during a visit a couple of years ago. “I was totally against reliving the past, unless we invented something new and fresh.Troy convinced me that the lyrics I wrote — and the music the band created — was as relevant, if not more so, today than it was the first time around. Still, if we were to do this, then Darling Machine was to be totally reinvented, a new image, a new expanded sound, basically starting over.”

Portella — along with Love and drummer Jason Gang — was in the first incarnation of Darling Machine, which released a self-titled CD produced by Mac Carter (ex-Shadow Puppets, Brand New Immortals, Drivin N Cryin).

After the breakup, Love started thejuliadream with Matt Spatial, playing up and down the East Coast and releasing a CD, Above From Beneath until the standard pitfalls of being in a band after years of touring — running out of money and a fizzling morale — caused them to break-up.

Love says that after thejuliadream, he needed to take a rest, “to cleanse my palate. I didn’t know if I would ever join another band, or form one. To me,

“After all this I basically needed to cleanse my pallet and take a rest. I didn't know if I would ever join another band or form one. The ATL scene, in my opinion, was tapped out as far as quality, or like-minded musicians, who were into what I wanted to do musically.”

Yet Portella’s long talks with Love during that snow storm, and Gang’s subsequent agreeing to join them again, made Love rethink his position. The three focused on finding a new guitarist, someone who could expand their sound, yet shared the same musical approach. They found that in J1m1 Mullins.

“J1m1 fit well with our new direction — and can play just about anything,” Love says. “He brought new light to the songs with his sound, tone and reinvented guitar parts. He is the Billy Duffy or Reeves Gabriels of Atlanta, just what we needed for our new sound.”

“At first, I was not really sure it would all come together,” Love recalls of the new band’s first rehearsals. “But, you never know how these things will turn out … the songs started coming back to life, we began writing new material, and, we realized it was too good not to go forward! Hence the restoration of Darling Machine. It grew into itself, fresh, new, and  updated!

“Looking back on the last one and a half years of us resurrecting this band and cultivating it's sound and look, I realized we had something special. So we went for it, full steam ahead!”

Going for it including the enlistment of the aforementioned Jeff Tomei  (Smashing Pumpkins, Matchbox 20, etc.) to produce, mix, and engineer the new album.

“He [Tomei] came recommended by my dear friends Johnny Blade and James Hall. Jeff produces The Ladies Of ... and I had met Jeff back in the day, while visiting some of the Ladies Of sessions. After a consultation with him, it was a no brainer to have him at the helm in the studio. He liked the band and it's sound and was happy to have something new he could get onboard with.

“I had decided,” Love continues, “since we were going full steam ahead with Darling Machine, why not take it another step further and make a record to showcase the new band? Jeff ‘cut the fat,’ so to speak, kind of like what Rick Rubin did with the Cult's Electric album. More importantly, he gave us insight into crafting songs, developing them even further, and made us an even better band. During these sessions we really grew as a band!”

The growth shows. Darling Machine rocks, with Love’s phrasing and the band’s attack playing off each other like the best rock ’n’ roll bands do. The ten songs create a powerhouse unlike anything to come out of Atlanta in recent times. A formidable debut, it recalls the early days of glam and goth, but with a look to the future that only an understanding of the past can bring about.

Love agrees. “We now have a body of work we are truly proud of, that we’re excited to support, full steam ahead. This is how the LP came about: concept, graphics, artwork, packaging — and a child was born! HA !”

Of course, releasing the record is just the beginning. Though Love acknowledges that “the LP is gaining traction slowly but surely,” he and the other members of Darling Machine know that the real work — touring, building a following — has only just begun.

“We plan to capitalize on that, focusing on the ATL region and hitting all the markets we can. Obviously if we could find a support slot on a major tour that would help,” he laughs. “But, if you don’t have the determination to to do the work yourself, why bother? That’s why we say, ‘Full steam ahead!”