At just 23, rising star Jontavious Willis is an old soul 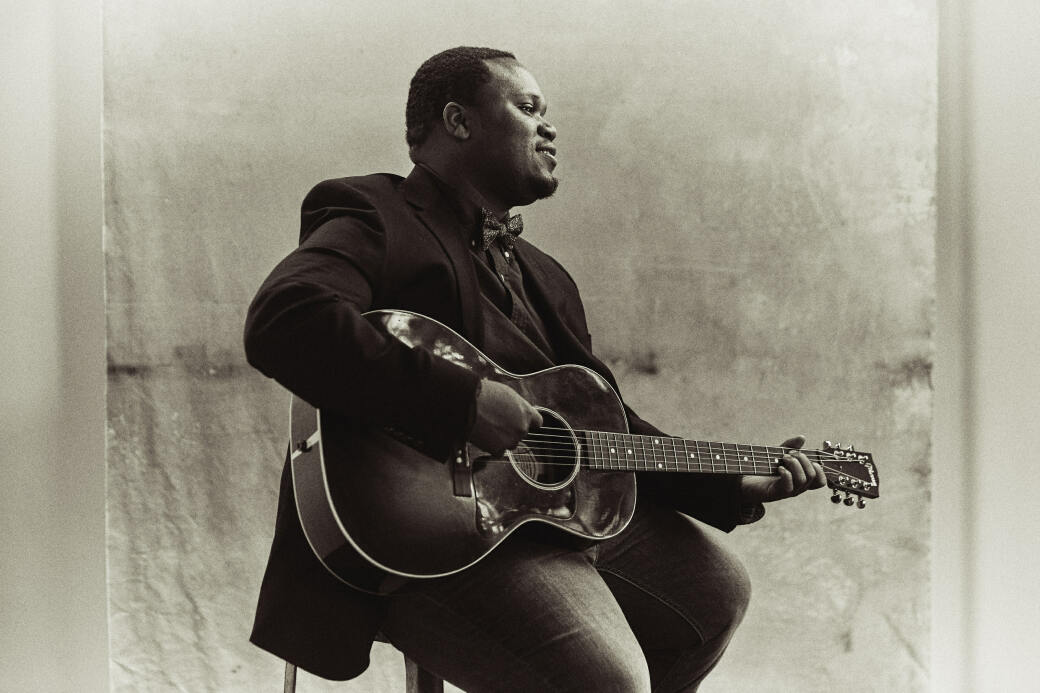 “Well the blues ain’t goin’ nowhere, be here for a great long time,” Jontavious Willis sings on the enticingly titled “Blues is Dead?,” a song from his sophomore release Spectacular Class. And he’s making sure the raw country blues he plays will be part of the genre’s long and storied legacy. Willis’ album, which officially dropped April 5, has already generated a buzz in blues circles partially due to the input of iconic bluesmen and executive producer Taj Mahal and producer Keb’ Mo’. With hard work, luck, and a lot of touring, this latest album aims to put the 23-year-old singer and guitarist from Greenville, GA, on the national blues map.

Playing live comes naturally for Willis. His love of blues was born when he was 14 years old, after being motivated by a YouTube video of Muddy Waters playing “Hoochie Coochie Man.” Even at that early age the youngster, who was already singing in church, had the experience and background to progress swiftly.

“I did my first professional show around August 2012 in Eutaw, Alabama, at the Black Belt Folk Roots Festival,” he says over the phone.

Willis was 16 at the time and had never taken a guitar lesson. Five years later the self-taught youngster released his first hastily recorded album, 2017’s Blue Metamorphosis, a refreshingly mature set of acoustic and electric Delta blues. But it wasn’t until he received a surprise call from Taj Mahal that Willis’ career heated up.

“I recorded a video called ‘Lucy Mae Blues,’” Willis says. “I did that song in an alternate tuning, not the standard tuning that 95 percent of songs today are recorded in. Taj heard it and thought it was unique. He had a show at the Atlanta Botanical Garden in 2015, and he asked me to play a few tunes,” he adds. “We talked for about a year or two after that.”

Their friendship led to an invitation from Keb’ Mo’, who had recently recorded 2017’s TajMo with Mahal, asking Willis to open a show for the high-profile Mo’/Mahal tour. That August 2017 gig led to over 60 more appearances supporting the extensive TajMo trek, a plum gig for which any aspiring roots musician would sell their guitar.

Willis became friends with Keb’ Mo’ during those dates, resulting in Mo’ offering to produce Jontavious’ next release, this time in a professional Nashville studio. Willis wrote 10 fresh original numbers and, with a session band hired by Mo’, played them live in the studio, recording Spectacular Class in a few days. The title refers to a line in “Take Me to the Country,” the album’s only solo acoustic track. Similar to the disc’s other songs about broken relationships, such as “Daddy’s Dough” and “Friend Zone Blues,” it is based on stories from his own life. The recording is crisp and tight, combining Willis’ love of Piedmont acoustic, raw electric Delta-styled blues, as on the opening “Low Down Ways,” and even ragtime with clarinet and trombone, as heard throughout the comical “Long Winded Woman.”

Willis is well on his way even before the album’s release. He has already scheduled shows in Norway, Switzerland, and Canada in September, and recently finished dates opening for fellow Georgia bluesman Tinsley Ellis. He will soon graduate college with a sociology degree after which it’ll be all blues, all the time.

With his natural talent, contagious enthusiasm, near encyclopedic knowledge of blues history and new album in hand, Willis is the new face of old blues. He proudly represents Georgia with support from the genre’s most respected musicians and his own “spectacular class.”

The blues ain’t going nowhere with Willis on the scene.

April showers bring the blues with these show highlights.

Tues., April 9
— Bonnie Bishop, Eddie’s Attic. It’s easy to get this veteran blues vocalist confused with that other Bonnie (Raitt) since they both approach their music with a similar rootsy folk/blues/soul attack. But you get to see Bishop in a small venue where she is guaranteed to blow you away.

Fri., April 12
— Lindsay Beaver, Darwin’s. Beaver is an anomaly in the blues world: a drummer/vocalist. Her high-profile debut on Alligator, Tough As Love, is getting major exposure, so this may be the last chance you get to catch her in a club.

Sat., April 13
— Benefit for the Sean Costello Fund for Bipolar Research, Darwin’s. Mudcat, Jeff Jensen, the Brooks Mason Blues band, and more honor the late Costello, one of Atlanta’s blues guitar icons who was just finding international acclaim when he died in 2008. It’s a win-win; enjoy authentic blues by local luminaries while you contribute to a good cause.

— Mavis Staples, Decatur Square. Gospel legend Staples needs no introduction, but she hasn’t played Atlanta in a while, which makes her appearance at the Amplify Decatur Music Festival a must-see event. It may be outdoors, but she always brings the church and raises the roof.

Wed., April 17
— Ryan Bingham, Buckhead Theatre. Singer/songwriter Bingham is most associated with the Americana scene, but he’s more bluesy and rocking than many. He even has a serious, hard Delta track on his new album, American Love Song.

Fri., April 19
— Ted Drozdowski, Darwin’s. Some may know the Nashville based guitarist from his Scissormen project, but Drozdowski is touring behind a terrific new solo album, Coyote Motel, which connects the dots between psychedelia and the blues.
— Will Kimbrough, Eddie’s Attic.
— The Subdudes, City Winery.

Wed., April 24
— Brandon “TAZ” Niederauer, City Winery. The cliché “up and coming” only begins to describe the 15-year-old TAZ, who already has the blues world calling him a future superstar, even without an album under his belt. He’s played with some legends, including Atlanta’s own Col. Bruce Hampton, and his clean, soulful leads shift from smooth to searing within seconds.

Sun., April 28
— Durand Jones & the Indications, Terminal West. Soul stirrer Jones and his band seemed to have stopped listening to music after the early ’70s, at least judging from their two albums to date. Theirs is an emotive R&B sound indebted to legends such as Al Green and Curtis Mayfield, and they’re on their way up.