The new gallery in Candler Park is a ‘pop-up shop’ for local artists; Kevn Kinney and Clay Harper provide the soundtrack for tonight's opening 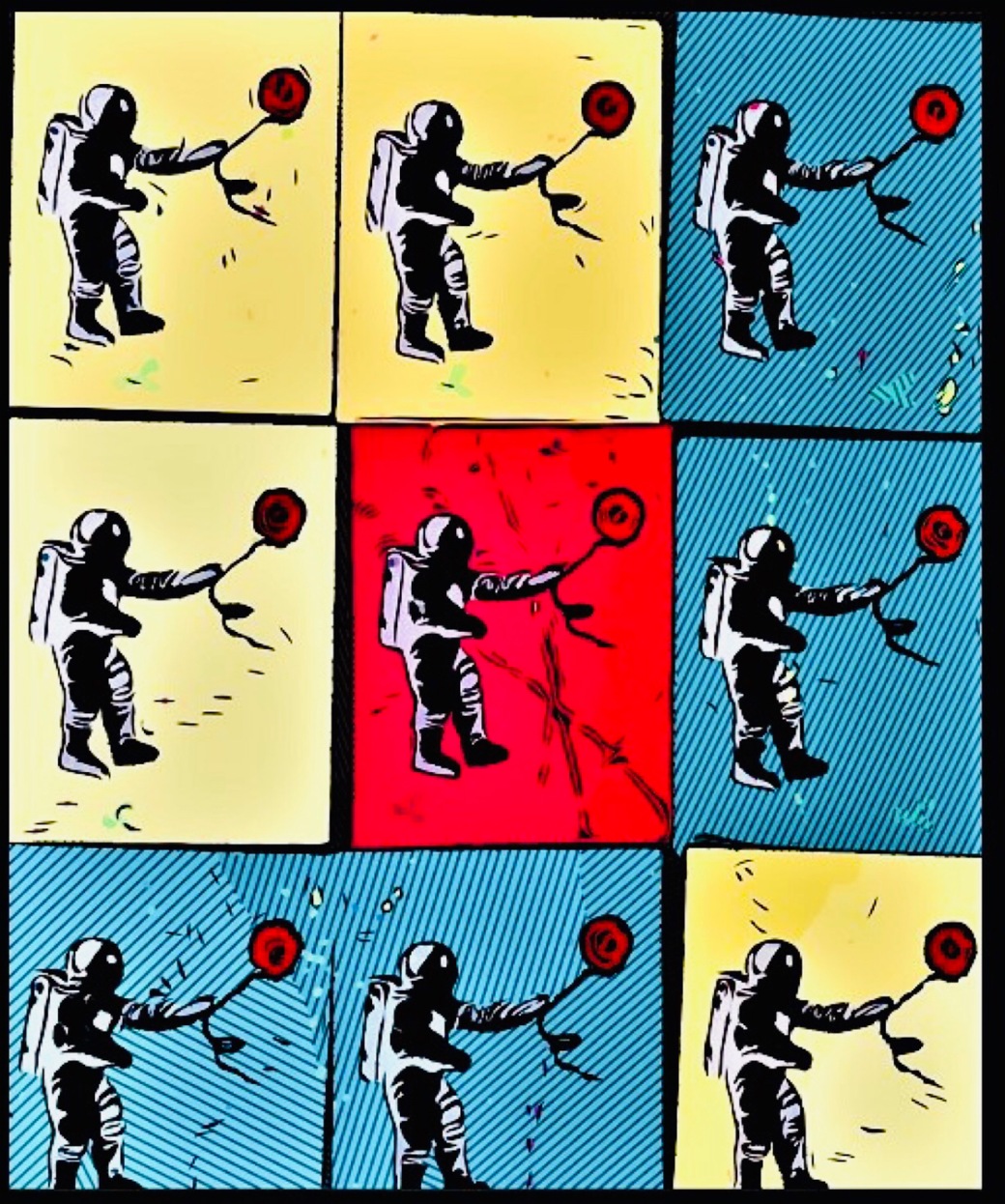 If you were taking in the sensory overload that was Clay Harper hosting his Tuesday nights in May residency at the Avondale Town Cinema last year, you will recall each night had it’s own series of art work promoting the music, art and social discourse.

The graphics, somewhat surrealist interpretations of the familiar juxtaposed with a red flower, were the work of therealfranktee, an otherwise unknown Atlanta artist, whose work is as comforting as it can be jarring.

Therealfranktee has come a long way since those Tuesday nights twelve months ago when Harper was previewing songs from his then about to be released album, Bleak Beauty. Indeed, Harper’s return to the stage proved to be a springboard for the prolific artist, who creates about five new works a week, launching his popularity into the stratosphere usually inhabited by the space-suited astronaut so often a cornerstone of his artwork.

The artist has taken his fifteen minutes and run with them. Tonight, May 2, he opens 378, a new art gallery on Clifton Road, around the corner from the Fellini's Pizza on McLendon Avenue in Candler Park.

Tonight’s opening will feature works by Tee, along with those of two other Atlanta-based artists, Anna Jensen and Ruth Franklin. Pieces from a series of postcard exchanges between artists Jack Logan and Kosmo Vinyl will also be on display.

The gallery will work as a pop-up space whenever the artists open the doors, with notices posted on Instagram and Facebook: @therealfranktee. Tonight’s opening promises to be something more than just an art exhibit. Music for the evening will be provided by Kevn Kinney and Friends. Kinney’s performance is not without reason. One of therealfranktee’s astronauts, holding a red flower, appears on the cover of Live The Love Beautiful, Drivin N Cryin’s new album, to be released June 21. It was through Harper that Kinney decided DNC should use Tee’s art for the album, the various components he provided incorporated in the package by art director Susan Archie at the World of AnArchie. Archie, a three-time Grammy winner, also designed Harper’s Bleak Beauty, the album that prompted him to organize last year’s successful Tuesday nights in May.

If such artistic incestuous isn’t enough for you, it was Harper who urged therealfranktee to open 378, reason enough for Harper to also be performing tonight.

Tee says the purpose of the gallery is “evolving,” but that his main hope is to provide a place for “local artists and musicians who need a space for a week or two, and to provide it to them if they are able to cover the operating expenses only while they are there.”

The artist/gallery operator says his art “will most likely always be represented, unless someone wants to take it down for their show.” Tee “encourages artists to reach out to book space to make sure the it gets used. The main goal of 378 is to help lift and build artists and musicians of all kinds,” he says. “I don’t have a plan. It’s just seeing where and how it evolves."

Tonight, he explains, “the artists will keep all proceeds from their sales. If money is donated for refreshments or at the door, after operating expenses are covered, those proceeds will be donated to a charity.”

Tee says that hopefully, once 378 is hosting pop-ups on a regular basis, more  I have a few ideas for  we have a few ideas as to what charity or school we will give the proceeds to after expenses.

The artists exhibiting at the opening were chosen because “they are who are in my life at the moment.” Tee moves in impressive circles. Ruth Franklin was voted “Best Established Visual Artist” by readers of Creative Loafing in 2014. Anna Jensen’s work has been commissioned by the Plaza Hotel in New York. Both artists have exhibited on the two sides of the Atlantic.

Kosmo Vinyl, one-time manager of The Clash, has been exhibiting the world over, including at Shawn Vinson’s Different Trains Gallery in Decatur. Vinyl has also been co-conspirator with Harper on a number of projects. He produced Drivin N Cryin’s 1997 self-titled album, released on Harper’s Casino Music label, recently remastered, retitled and re-released as Too Late to Turn Back Now. Perhaps it is Vinyl’s collaboration with Athens musician and artist Jack Logan that brings this party full-circle. Logan created the comic book that accompanied Doug, the second album by Harper’s first band, The Coolies. It was Logan’s clay figure Frank, from his album Bulk, which first inspired therealfranktee.

He explains. “He [Logan] made these little yellow clay figurines for his album Bulk. I have one. After collecting all types of art for 30 years or more, I started taking photos of Frank. Then I made stencils of him. Then drawings. After that, I started making the posters for Clay’s shows at Avondale Towne Cinema. Since then, I have become obsessed.

“The main reason I did Drivin N Cryin’s new album cover is because Clay has a lot of my stuff hanging in his house and Kevn saw it. It seems Kevn and I rode on the same spaceship at some point in 1985.

Tee describes his work as “fun. Really, it’s whatever makes me happy. I’m not sure if it fits in or not but it’s colorful, fun and open.” That attitude is why the flower has become so much a part of his paintings. “I thought it just made everything happy.

“One more thing about the flower,” he adds. “My ant was Japanese and barely spoke English. She adopted me as a child when i was getting off drugs. Before she died, she painted a water color for me. It was a red poppy so that’s the flower I paint. She was a saint. If we could all have grace and mercy like her, traffic wouldn’t be so bad in this town.”

“I get a lot of messages from deserving artists and musicians asking how they can book 378,” Tee notes. “I would love to hand the keys over to these people and let them man their own shows and create their own space for one or two weeks at a time. These are just ideas. Right now things are just moving, and I’m willing to see where it goes.I really don't know what this place is going to be. I am riddled with anxiety but that is life. I have hopes that artists of all types will have a chance to use the space, make some money from their art and bring some love to the community.”