THE BLOTTER: 'Beyonce’ in a pink lace nightgown 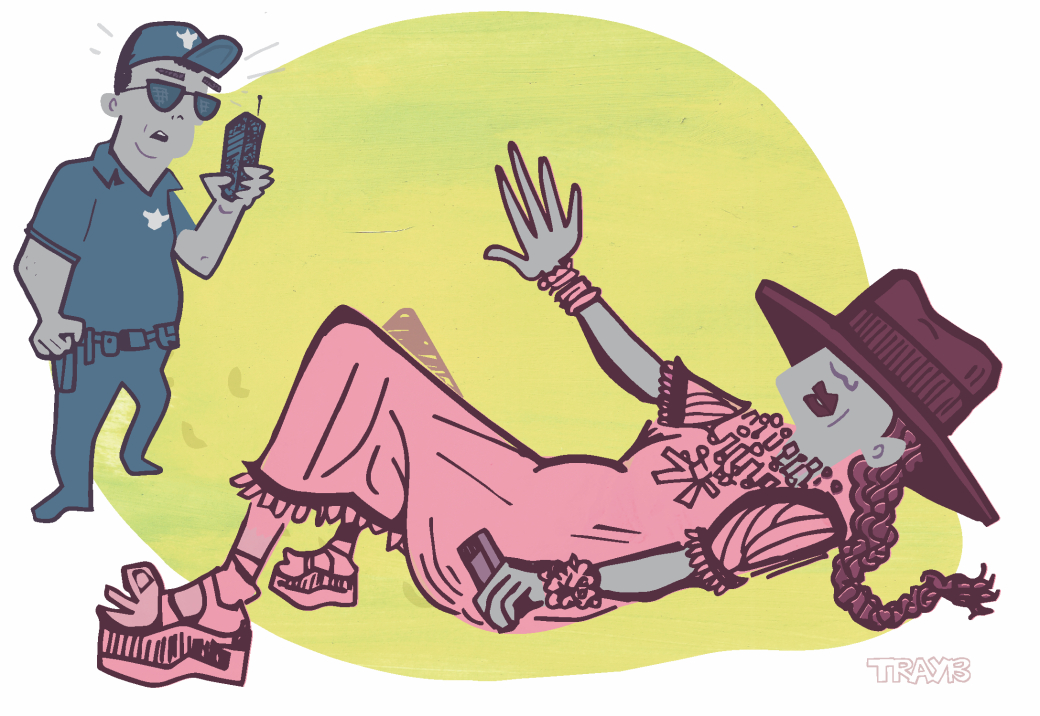 
BABY, I’M A STAR: Police responded to a ruckus on Metropolitan Parkway during rush hour. “We observed an apparent black transgender female dressed in a pink lace nightgown, lying down on a blanket on the sidewalk.” The lead officer asked for her ID. She just stared and gave him the silent treatment. ”The individual acted as if I was not there and continued to ignore me,” the officer wrote.

He tried again. “Can you hear me?

Perhaps she wanted a bigger audience. When backup police officers arrived, she perked up and got chatty, introducing herself as one of the most famous women on the planet: “She identified herself as Beyonce Knowles-Carter and it became immediately clear that she was having difficulties with reality,” according to the report.

Beyonce in a pink nightgown was posing on a black blanket.

“Ms. Knowles-Carter said multiple times that this was her home (indicating the sidewalk) and she wasn’t going to leave,” an officer noted. “She then looked at me and said, ‘I’m going to beat your ass,’ before stepping into heavy traffic and crossing the street.”

Police promptly arrested the 31-year-old wannabe Beyonce and took her to jail. “We attempted to use the fingerprint scanner to determine Ms. Knowles-Carter’s actual name, however we were unable to do so due to technical difficulties,” an officer noted. So she’s just “Beyonce” in the police report. And that probably makes her happy.

SPECIAL SAUCE: At a strip mall just outside I-285, a bartender got in trouble at a chain restaurant known for making every day like Friday.

A police sergeant witnessed the bartender “take a mixing cup from the bar — and proceed to pull his penis out and urinate into the mixing cup.” How old is this bartender? Oh, he’s a 40-year-old man. He went to jail on public indecency charges.

FREE $$ SPARKS OUTRAGE: In Candler Park, a dispute erupted inside a market on McLendon Avenue — and an older male customer called police for help. An officer arrived and asked: What happened?

The 68-year-old customer said a female employee had started following him around the market. “(He) felt harassed because she continued to follow him around the store and then out to his vehicle, where she then offered him a $25 gift certificate,” an officer noted.

Another guy said he saw the whole thing go down and “felt as if she was trying to bribe the older man with the $25 gift certificate,” the officer noted. Both men “were very adamant about having a police report done due to feeling harassed.”

The female employee says the Witness Guy “became angry” and “began yelling” at her in the parking lot, causing a disturbance. No charges filed.

BEAT IT: A man with a swollen cheek and neck was sitting outside an abandoned, half-burned building on Joseph E. Boone Boulevard. A police officer asked him what business he had on the vacant property — and to please identify himself.

The man replied: My name is Michael Jackson. (No, it’s not). He gave a fake date of birth, too.

Eventually, the man admitted he wasn’t Michael Jackson and said he gave a false name because he thought he was a wanted man. The officer promptly arrested him for false representation.

SOME LIKE IT HOT: In Cascade Park Nature Preserve, a large fire broke out with flames  “spreading very fast in the woods.” Two young women, ages 18 and 23, admitted to starting the fire and led police to their special forest spot. “They advised us they were looking for a place in the woods to study and to look at the sky, and started a small fire which they lost control of very quickly,” an officer noted. Now the two women are banned from “any and all” Atlanta city parks for one year.

PLEASED TO MEAT YOU: In Adair Park, a woman said she took a nap and then started cooking dinner in her home on McDaniel Street. “She opened the refrigerator, and noticed all her groceries were gone,” an officer noted. Missing items included chicken, fish, steak, and roast — and her gold diamond ring. She called police, who found absolutely no signs of forced entry; her security alarm didn’t go off.

The officer had doubts about the woman’s story … and her mental state. During the interview, she repeatedly lost track of her eyeglasses — which were in plain view the whole time.

POOP PROBLEMS: Police got a call about a man in a blue shirt, wielding an axe on the BeltLine. Officers scoured the area, but didn’t see anyone with a hatchet. Eventually, they found the 48-year-old suspect in a parking lot near Monroe Drive and 10th Street. The suspect claimed he did nothing wrong “except yell and cuss” at the victim, an older woman walking her dog on the BeltLine.

The woman, age 68, says she was cleaning up her dog’s poop, when suddenly the suspect came out of the woods and started chasing her, yelling, “Get the hell out of here with your damn dog!”

Police found a black hatchet in the man’s book bag. “He claims he only uses it to chop wood in the woods where he stays,” an officer noted. The man went to jail on a disorderly conduct charge.

THE BIG SHORT: In Buckhead, a man called police about a letter found at an empty furniture store on East Paces Ferry Road that he had recently sold to a corporation. The letter writer: a 37-year-old male worker apparently upset about the corporation’s plans to liquidate the biz.

In the note, the employee explained why he stole $24,000 worth of furniture on display for liquidation — even listing all 12 pieces of furniture that he swiped. By the time his former boss found the note, read it, and called police, the employee’s phone number had already been disconnected. He’s gone.

THE EX-FILES: In Northwest Atlanta, a man left the home he owns on Allegro Drive, due to his recent roommate’s “dangerously erratic behavior.” He said his ex-roommate had “started referring to himself as other people and kept pulling out a handgun,” an officer noted. The man called 911 after seeing a Facebook live video of his ex-roommate walking inside his home, and referring to himself as “either the musician Nipsey Hussle or (the man’s) brother, both of whom are deceased,” the officer noted. In the video, the ex-roommate walks round the home, showcasing multiple bullet holes and ammunition he’d fired into a wall near the front door.

Police went to the man’s home on Allegro Drive; the ex-roommate had jammed the doors to prevent entry. They found the ex-roommate clutching a handgun and wandering around on Donald Lee Hollowell Parkway. “He was still clearly delusional, claiming to be other people and saying he was famous,” an officer noted. He was committed for a psychological evaluation.

JUST PLAIN BOLD: A police officer was doing paperwork while sitting in his patrol car on Peachtree Street. Suddenly, a man in a black shirt and blue jeans ran up. The man “yelled ‘FUCK YOU’ while displaying two middle fingers in my direction,” the officer recalled. “I told him to get out of the parking lot. The man continued to yell at me, then suddenly he ran to the rear of the patrol car and began kicking.”

Next, the man grabbed a water bottle from the ground, smashing it into the patrol car. The cop got out of his patrol car, called for backup, and ordered the suspect to lie down on his stomach. “His eyes were bloodshot and he began acting as if he knew me,” the officer recalled “But I’ve never seen this man before.” The suspect, age 39, was charged with simple assault.

The Blotter Diva compiles her reports based on cases from the Atlanta Police Department.