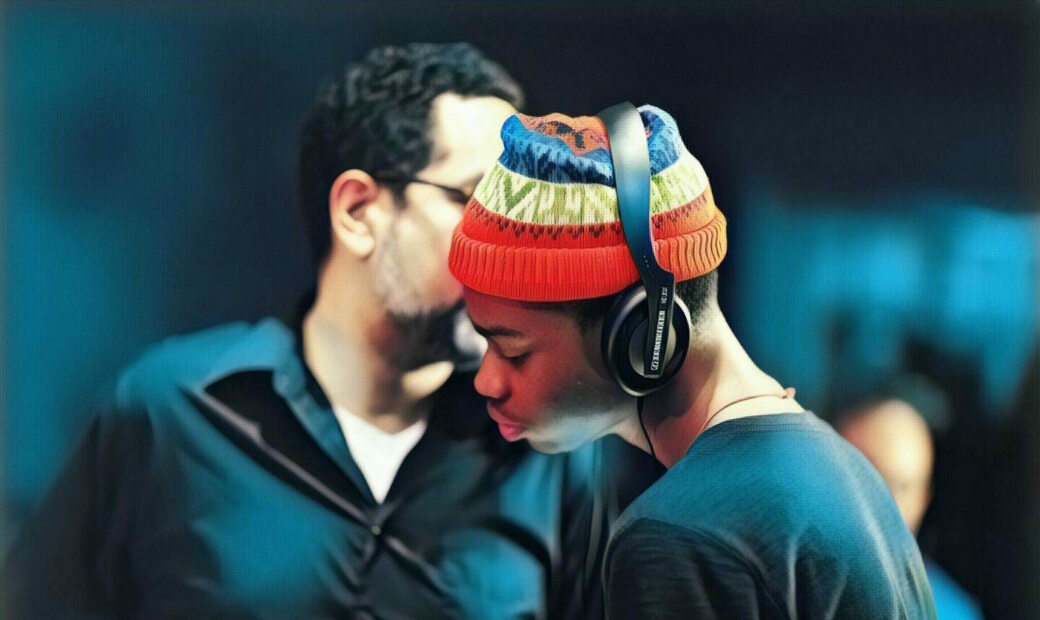 On a sunny and unseasonably chilly Tuesday afternoon in early May, I meet Sequoyah Murray, sitting on a stone wall next to a swingset in Howell Park, watching his 12-year-old brother August spinning around on a jungle gym. They’re waiting for their father, Kenito Murray, who arrives just a few minutes after me. The park is alive with activity on all sides — children are swinging and laughing, and, just a few feet away, a sand volleyball court is the scene for a particularly intense pair of matches. Stray hits send balls bounding our way at rocket speed, and shirtless men wearing short-shorts come trotting after them every few minutes. “It’s okay,” Sequoyah says. “I’ve been sitting here for a while and I haven’t been hit … Yet.”

Sequoyah possesses a truly disarming presence and an awareness of his surroundings informed by an otherworldly intuition that’s far beyond his 22 years. I first noticed it when we met for an interview in 2017 on an abandoned stoop near the Inman Park MARTA station to catch up before he played Irrelevant Music Festival in East Atlanta. At the time, his gently cluttered sound, steeped in heavy rhythms and abstract musical textures, made him an ever-present figure in the city’s young D.I.Y., jazz, indie rock, and experimental music scenes. Back then, he was wrapping up work on his second self-released offering, a cassette tape titled Dream Sequence. Two years later, Sequoyah is just getting back to the United States after completing the final session of the Red Bull Music Academy in Berlin. He plans to move there for the foreseeable future later this summer to complete work on a new album. He’s also quietly reeling from the release of a new EP, titled Penalties of Love, which arrived May 3 via Chicago’s Thrill Jockey Records in the U.S., and Other/other in Europe.

Sequoyah’s father plays drums on all four songs throughout the EP — “Penalties of Love,” “Haven,” “Second Born,” and “True Fun” — and his brother August’s voice can be heard in “Second Born” and “True Fun.” His mother, Treva McGowan, even sings backup vocals on the title track; her contributions are credited on the album’s sleeve to K. Auset. When I ask if she’s meeting us for the interview as well, Sequoyah says, “No, she’s in Dubai, teaching English.”

Throughout the Penalties of Love EP, Sequoyah’s vast and expressive baritone rises over heavy bass and abstract musical motifs to foster a staccato pop sound. Beneath the title cut’s billowing movements, a gentle, transcendental journey into electronic pop beats and would-be new music influences take shape. With earlier releases, Sequoyah’s creative focus was fixed on crafting music from the perspective of a vocal artist. The approach drew inevitable comparisons to the late Manhattan-based cellist and composer Arthur Russell's expressive excursions into proto-disco, minimalism, and the avant-garde. Sequoyah’s rich combinations of tones and layers of sound give rise to mysterious, non-linear, sometimes dissonant but always alluring musical structures. With each song comes a more complete portrait of the artist and his defining sound. Sequoyah pauses the conversation to ask if being called an avant-garde artist is a compliment. (It is.)

“So it doesn't mean weird on purpose, and trying to not be mainstream?” he asks. “That's what I have often associated that term with. I'm proud of what’s on the EP, and it's really complex,” he adds. “It’s maybe even a little more complex than some of the stuff I’m writing now, but that's because I want to unify all listeners while at the same time still going off and doing something that’s a little different.”

The idea to release an EP was hatched by Sequoyah’s manager, Dave Corney of the Bristol-based electronic music project Hyetal. Their relationship extends beyond business into a creative back-and-forth. Corney runs the label Other/other with the Berlin-based artist James Ginzburg of the duo Emptyset. Both Corney and Ginzberg also receive mixing credits on the EP and on the forthcoming album.

The songs on Penalties of Love were written between 2014 and 2017. As such, Sequoyah seems more interested today in talking about the new album he has in the works, titled Before You Begin, which is set to arrive September 13 via Thrill Jockey. He’s also content to let his younger brother and father talk at length during the interview, as his family connections have left an indelible mark on the music.

Kenito Murray’s interest in music began early in life when his family moved from Washington D.C. to Guantanamo, where he was exposed to jazz, Latin and Brazilian music, early ska, and bossanova. Later, after moving back to D.C. in the early ’80s, Kenito became an early participant in the Capital city’s famed punk and hardcore scenes forming around Dischord Records. He even played drums backing singer Brendan Canty (Rites of Spring, Fugazi, the Messthetics) in an early incarnation of a band that became Deadline, which appeared on Dischord’s Flex Your Head compilation.

Kenito was equally influenced by Washington, D.C’s thriving go-go music scene, blending elements of funk, jazz, and disco with fiery live performances from groups like Trouble Funk and E.U. In adulthood, he distills all of these influences into various projects, from performing at weekly Sunday-night jam sessions at Gallery 992, to playing percussion with the Wolfpack, Visitors, and the group Cinema Soloriens alongside founder James Harrar and alto saxophonist and Sun Ra Arkestra leader Marshall Allen.

It was through his record collection that Kenito introduced Sequoyah to music, starting with LPs by Stevie Wonder, Prince, and Jimi Hendrix, then moving on to Cindy Lauper, Depeche Mode, and then going deeper into other forms of music. “I always feel a little weird in record stores now,” Sequoyah says. “I never really had the experience of going to record stores when I was growing up, but I listened to records constantly, because he'd just keep putting them in my room for me.”

And as Sequoyah moves deeper into his own journey musical journey, the same records are being passed down to his brother, August.

When asked about the impending move to Berlin, Sequoyah looks around the park and says it reminds him of home. “It feels a lot like it does here, trees are changing in the autumn — different kinds of trees — the architecture is lower, and it's very spread out,” he goes on to say. “I like the idea of being somewhere that I can mold my reality in a different way. I have been here my whole life, and I need a new place where I'm not necessarily with my support system, and I don’t know what's around the corner.”