Not those ‘fancy but not really interesting’ 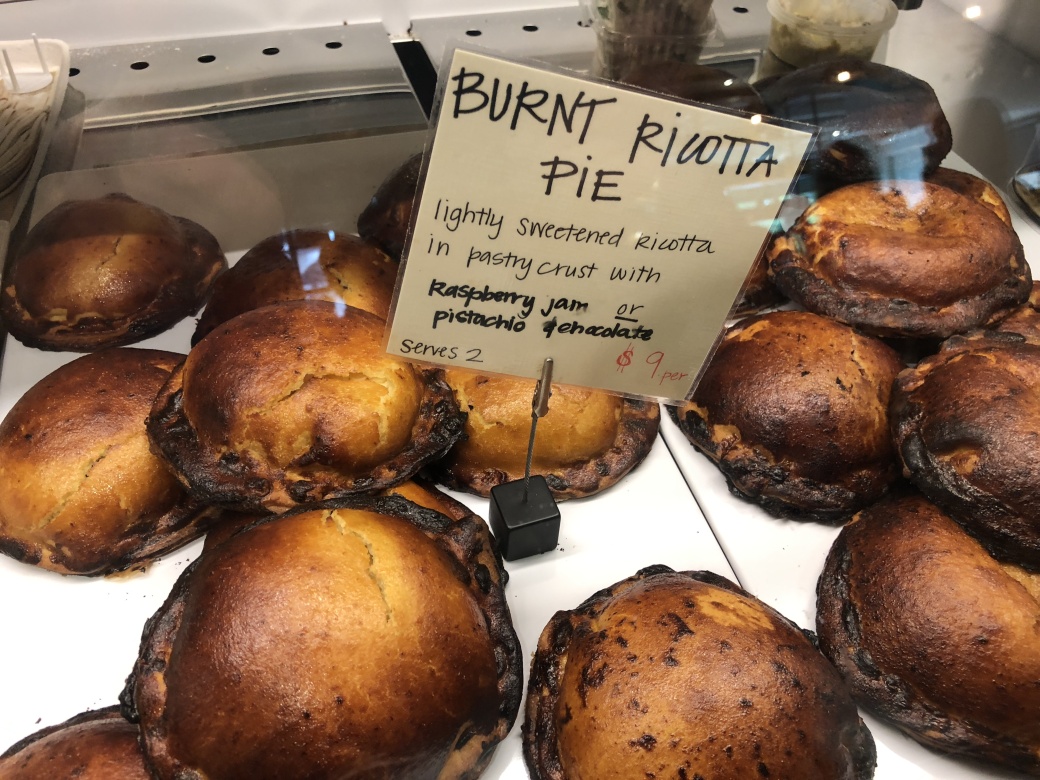 As you’ve probably noticed, it’s been raining restaurants in Atlanta for a few years. Immigrants from Silicon Valley and Central America have been making Atlanta great again with high-end products like, say, technology and abortion-inducing cocaine. These people demand restaurants like themselves: fancy but not really interesting. The resulting surge of expensive boredom has caused some of the city’s dining critics to wail with outrage.

Yes, I mainly agree with them, but I’ve never enjoyed spending huge amounts of money on a meal, no matter how gorgeously prepared and presented it might be. This is partly socialist guilt, partly being pretty poor myself, and partly being a philistine. Nonetheless, I admit I would have been pissed had Jesus handed me nothing but a fish and a loaf of bread. So I try to indulge my hypocrisy by looking for cheap, exceptional meals. Last month, I landed at a bunch of established spots with mixed results. I took notes. Here are some excerpts. 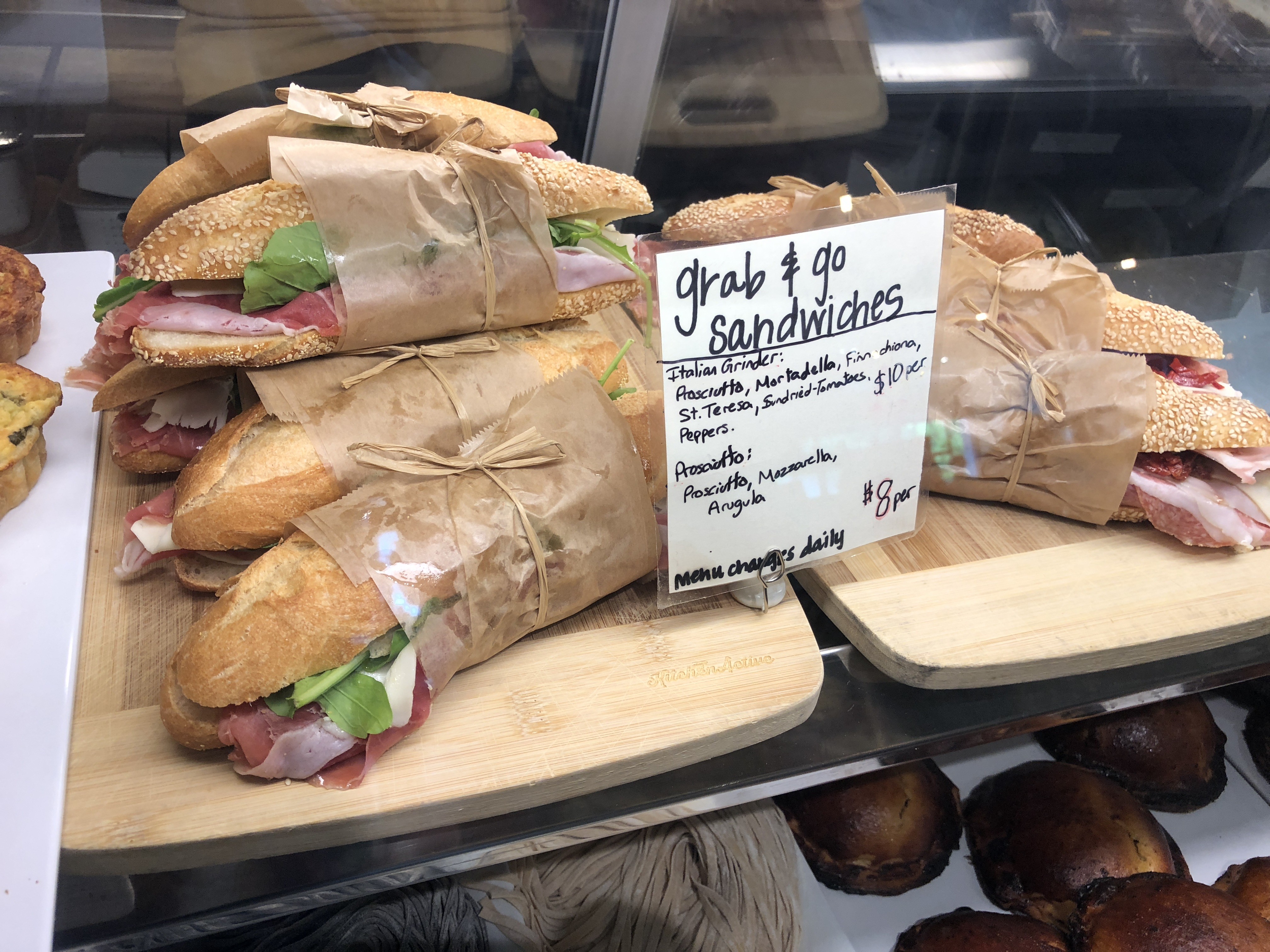 Sandwiches to grab and go at Storico Frescco.

“This is the best lunch I’ve had in a year or more, even though I’m in a basement in Buckhead, and the over-groomed guy at the next table is eating pasta with his thumb and forefinger, one noodle at a time.”
This was at the gloomily cheerful basement-level Storico Fresco Alimentari e Ristorante. I reported dining well there a few months ago, and returned recently for the best lunch I’ve eaten in memory. Yes, I know the place is pretty expensive, especially at night, but you can eat a luxurious plate of pasta for around $15 at lunch. You need to order the corzetti, a round, flat pasta, typically stamped to resemble a coin. Owner-chef Michael Patrick anoints it with a sinfully creamy, earthy porcini sauce and tosses it with hedgehog mushrooms. Interestingly, the corzetti have a super-dense, sensual texture like that of a mushroom itself. Granted, the presentation isn’t pretty, but the dish is, like any good ’shroom trip, fun, therapeutic, and spiritual. It redeems everything. Really, if only entheogens tasted this good!

I’ve also sampled the popular fried squash blossoms filled with ricotta and mozzarella. They’re delicious but heavier than I like them and a bit tepid. I want them really hot, with a tempura-style batter barely clinging to the bloom. And use less cheese, so that they melt in the mouth. The antipasto of fried seafood was a flashback to Italy’s Cinque Terre for me. The plate included branzino, shrimp, and calamari. It was absolutely perfect, and I snatched the shrimp head from the plate as it was being removed from the table. Be sustainable! Eat the heads, people! The dessert pastry here not to be missed is the “burnt ricotta pie.” It’s a charred palm-sized flaky bun filled with ricotta plus your choice of raspberry jam or pistachio-chocolate cream. Go for the latter.

Storico originated as a boutique grocery, selling Italian products, cured meats, premade meals, and handmade pasta. All of that is still available. I lunched there with my friends Brad and Eric, who live in Rome half the year. They love the place and everything it sells, which is remarkable since they hate everything else Italian in our city. The good news is that Chef Patrick and co-owner Pietro Gianni are opening a second, Rome-style venue, Forza Storico, on the Westside across from JTC Kitchen and Bar. The name means “Let’s Do This.” I hope the man eating his noodles by hand will take that as a challenge to use a fork. Storico Fresco Alimentari e Ristorante, 3167 Peachtree Road, 404-500-2181, storicofresco.com. 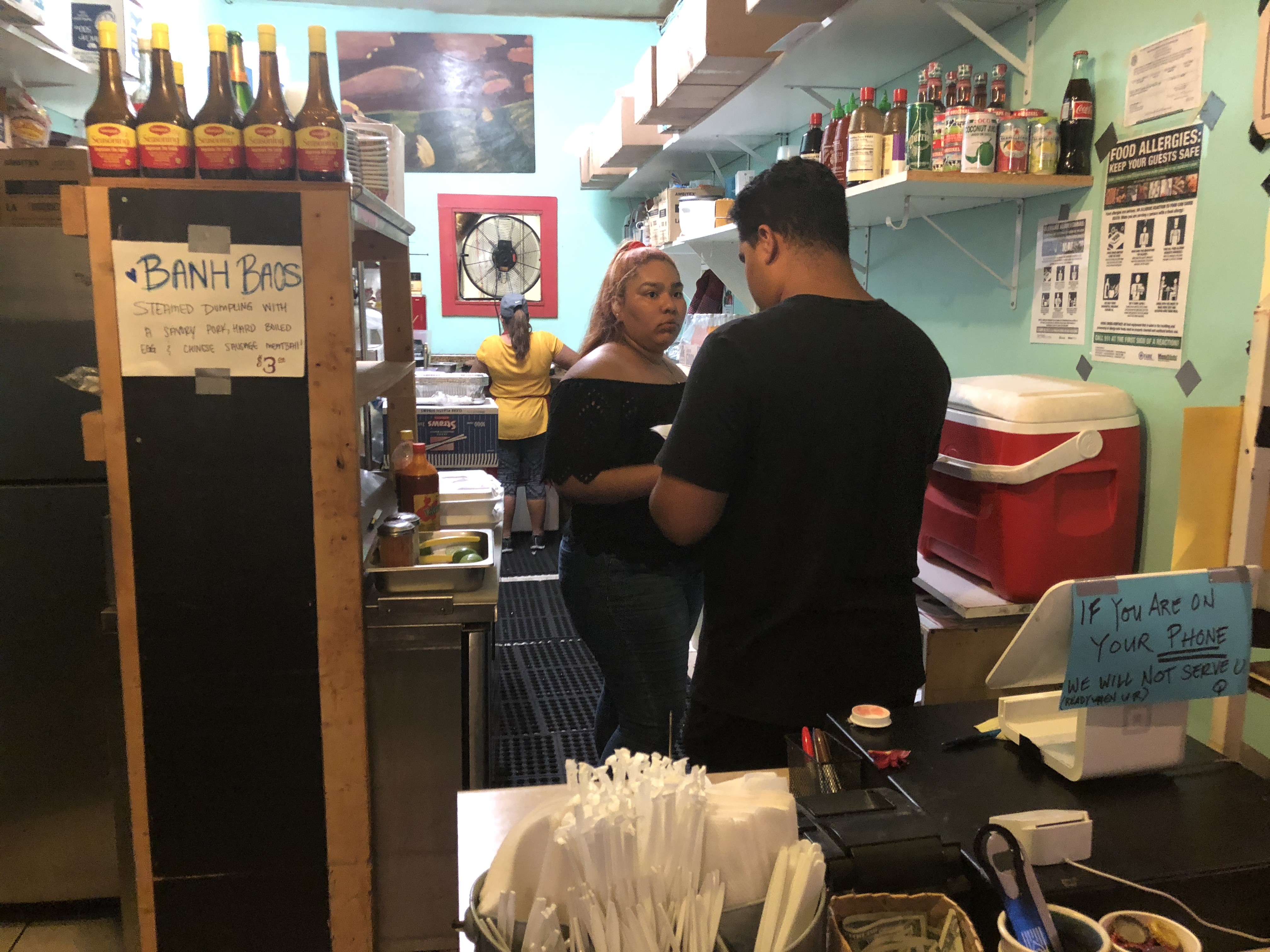 The Taqueria de Rojas stall at We Suki Suki..

“Great grub, but a woman stole our seats and refuses to budge, so that we are forced to eat outside at a tiny counter amid the Sturm und Drang of East Atlanta Village.”
I had to try the new Taqueria Rojas inside the almost claustrophobically narrow We Suki Suki food hall in East Atlanta Village. The new stall is open 4-9:30 p.m. weekdays only. The bad news is that during those hours, it replaces the Vietnamese stall up front, so you can’t create a MexiViet banh-mi tamale. The taqueria menu is, fittingly, all tacos, tostadas, tamales, and burritos. You get classic fillings, like al pastor, chorizo, and carne asada. There are a few vegetarian options like rajas. Prices are insanely low, like $6 for three tacos. I thought everything we ordered was delicious, including the salsas. I do suggest that you opt for the tamale’s corn-husk wrap instead of the rather slimy banana leaf. The big problem here is finding a seat. One of us camped at a community table to hold a place when we got there. He got up for a moment and explained to others that he was holding three seats. That’s when the hog lady sneaked in with her fam. Two of us confronted her. “I didn’t know!” she said. She did not say, “We’ll find another place.” You can reasonably argue that it’s silly to expect to get conveniently seated amid We Suki Suki’s chaos, but, bitch, please!
Taqueria Rojas at We Suki Suki, 479 Flat Shoals Ave., 404-645-9651. http://wesukisuki.com/ 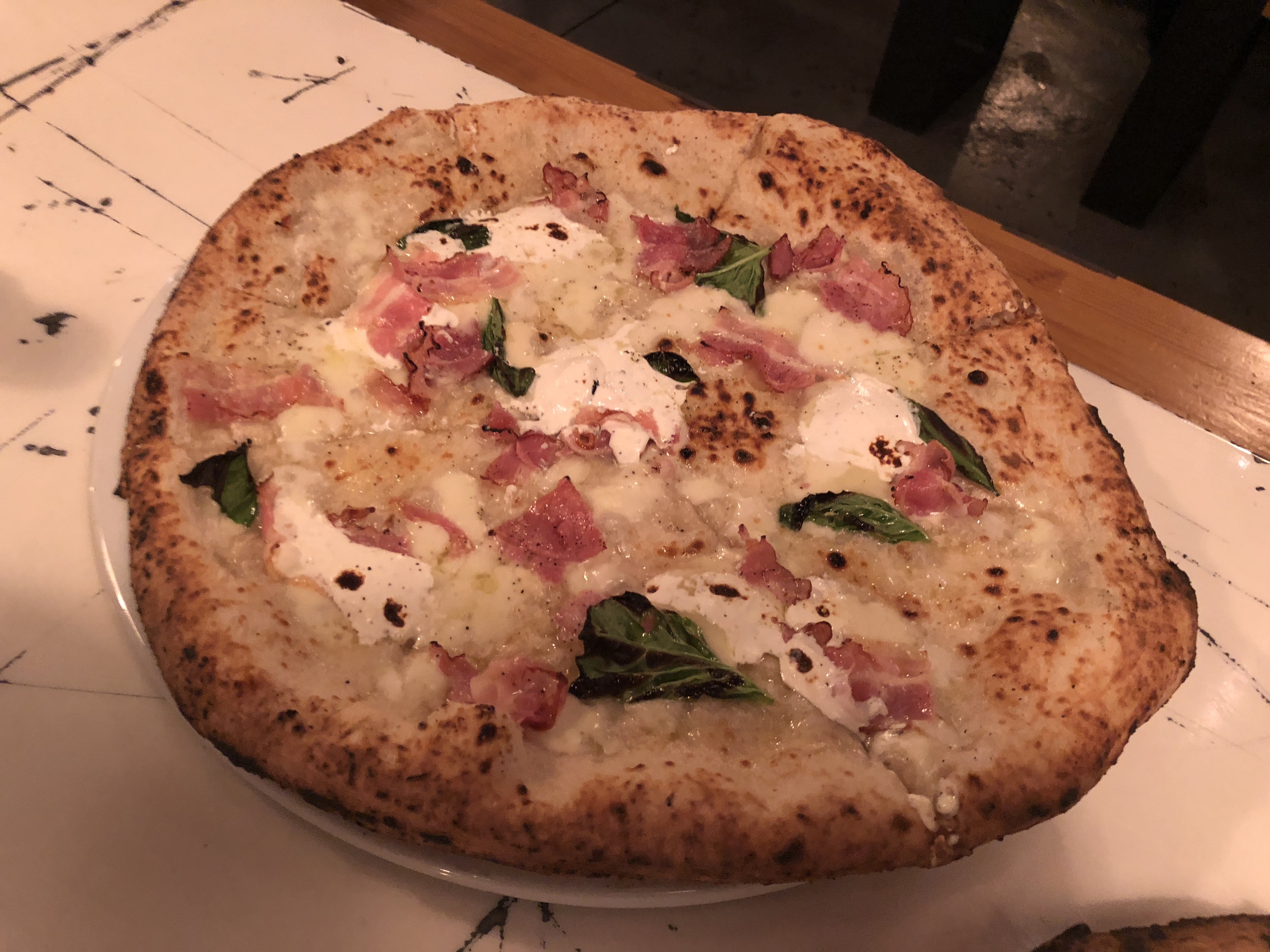 The Oro Bianco pizza at Varuni's.

“Some clown is shrieking in the dining room and firing a cannon full of confetti while carts of free, rubbery penne begin circulating, and I’m thinking a veteran with PTSD is likely hiding under a table.”
I don’t know what the hell happened to Varuni Napoli, the pizzeria across from Ansley Mall. I visited with two friends on a Friday night, typically the busiest night for many restaurants, and there were plenty of empty seats in the beautiful dining room that wraps an open kitchen containing big blue ovens. By 9 p.m., the restaurant was starting to empty, and that’s when the confetti orgasm was staged. We figured the early waning meant Varuni’s is mainly a destination for Morningside families who don’t demand much.

We ordered a red pizza, the Porreca Piccante, and a white one, the Oro Blanco. Although individual-sized (to our eyes), two are plenty for three when you start with a couple appetizers. We liked our starter, meatballs in marinara and rice balls (arancini) filled with fresh mozzarella, ground beef, and a few desiccated green peas. The best app was the panzerotti — potato croquettes with a melting, smoky mozzarella and parsley. In fact, the panzerotti were the best thing we ate, period. Our pizzas weren’t merely wet in the center, as is usual with Neapolitan pies. They were undercooked, almost soggy, and barely charred. Worse, the toppings were so sparse, we couldn’t even find some that the menu described. So I won’t bother to list them. The free tomato-sauced penne, although a little undercooked even for al-dente lovers, was better than the pizza. And the pies were $22 and $23 each! My advice? Go across the street and have a New York pizza at Vinny’s. Varuni’s also has a stall at Krog Street Market. Perhaps better.
Varuni Napoli, 1540 Monroe Drive, 404-709-2690, varuni.us. 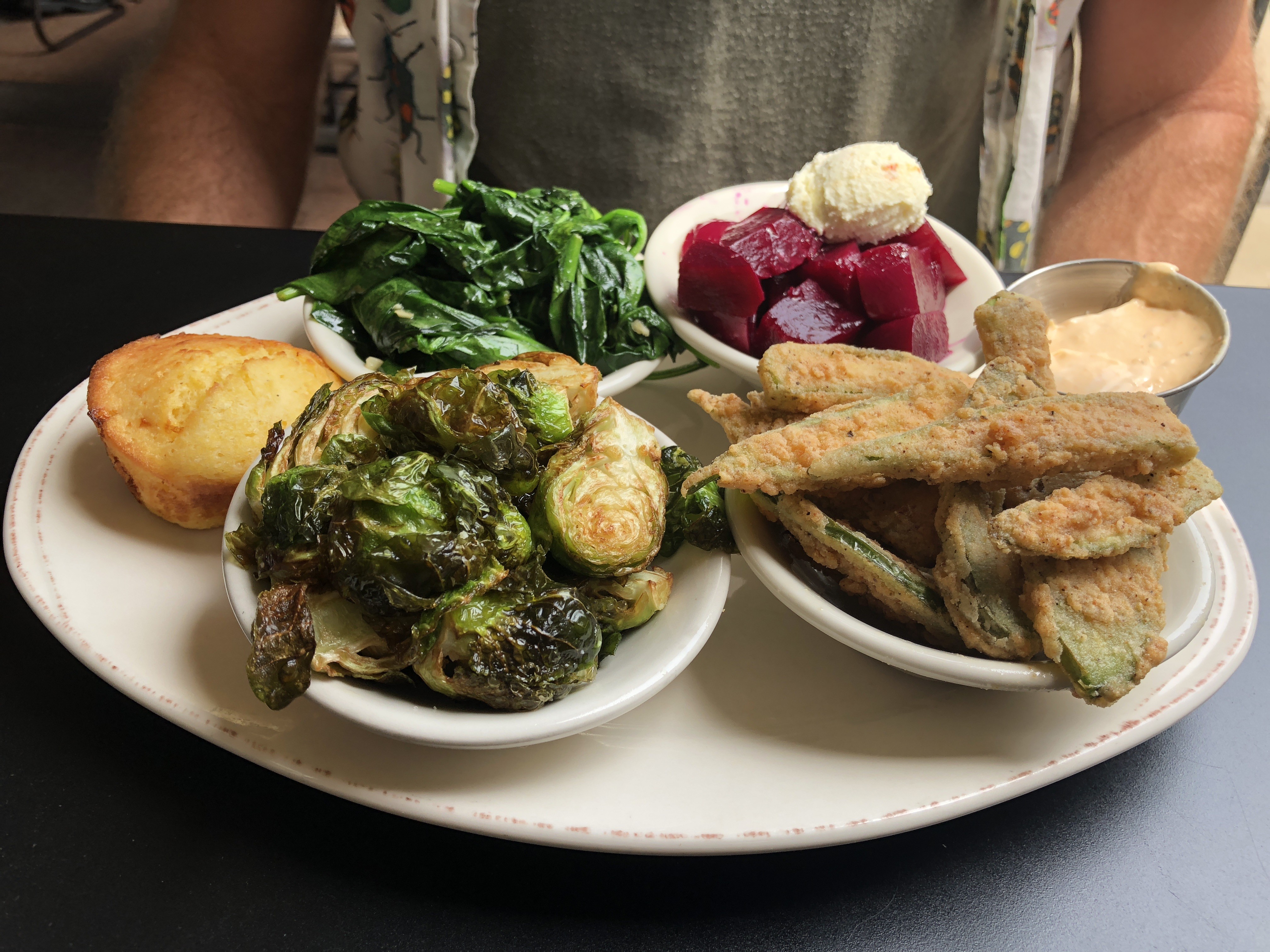 A veggie plate at Bantam & Biddy.

“I’m having my first face-to-face with my ex-partner of nearly 30 years ago, and he has turned into a vegetarian who recently came across pictures of us in spandex and Las Vegas headdresses he made one Halloween. I feel confident he won’t release the photos if I am nice.”
No, really, it was good to sit down at Bantam and Biddy, where people can actually hear one another speak and apologize for the incredibly evil things they once said. Unfortunately, my go-to dish kind of sucked. I always get the chicken-vegetable soup topped with a giant cheddar biscuit. Sadly, there was seriously so little broth in the bowl that the biscuit was half-beached like a whale gasping for rescue by Betty Crocker. The ex’s veggies were roasted, fried, steamed, and pickled. They looked good. Soon, he’ll be able to eat designer salads at Chopt, which is opening a few doors down.
Bantam and Biddy, 1544 Piedmont Ave., 404-907-3469, bantamandbiddy.com 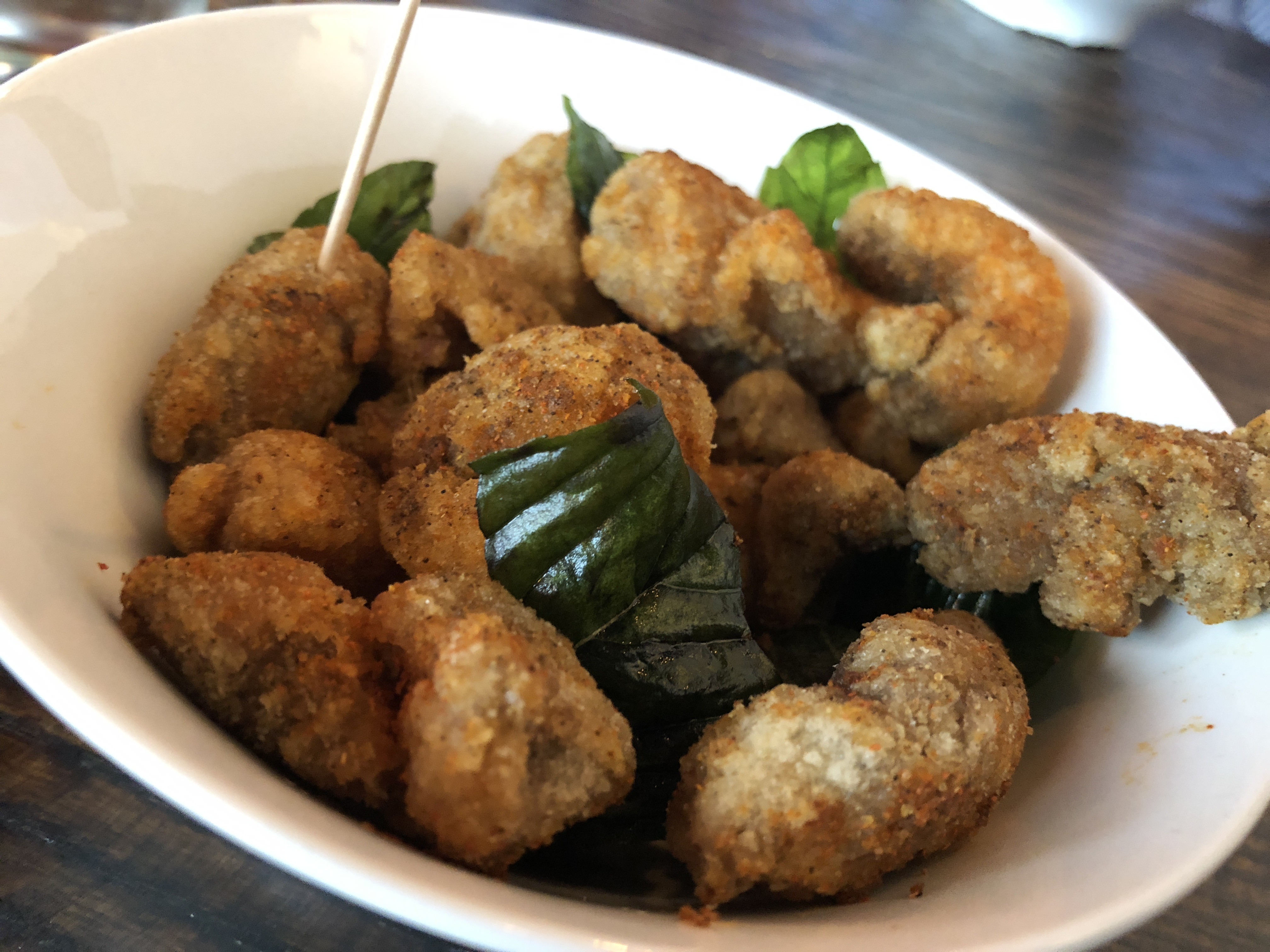 “I’m mortified. My lunch date has shoved his bowl of beef soup away and barked at the server that it’s too spicy. I taste it and find it ‘lively’ at most. I’m so sick of this experience with people.”
Our location was Ah-Ma’s Taiwanese Kitchen. I tell the server that unlike my friend, I find the spicy components almost understated. He tells me I am far from alone. The problem is, of course, that they can turn up the heat on mild food, but can’t turn it down if they make it appropriately but excessively spicy for many diners. I have always loved hot food, ever since my mother painted her nipples with Tabasco before nursing me.

Let me explain spiciness. While the experience of eating a hot chile can be very painful, there is no actual damage being done to your precious mouth. It’s a chemical trick played by capsaicin. I’m not going to go through the whole neural process but the payoff for enduring the transient pain is the brain’s sudden release of dopamine and endorphins. In other words, you get a rush of euphoria — a “be here now” jolt that further enlivens the taste of everything else in your bowl. Just try it. Work your way up slowly on the Scoville scale and you’ll cease ruining everyone else’s meal with your whining. Indeed you will joyously throw up your arms, not your meal, as though you were on a roller coaster. For a fairly spicy start, try Ah Ma’s salt-and-pepper chicken nuggets.
Ah-Ma’s Taiwanese Kitchen, 931 Monroe Drive, 404-549-9848, facebook.com/ahmasatl 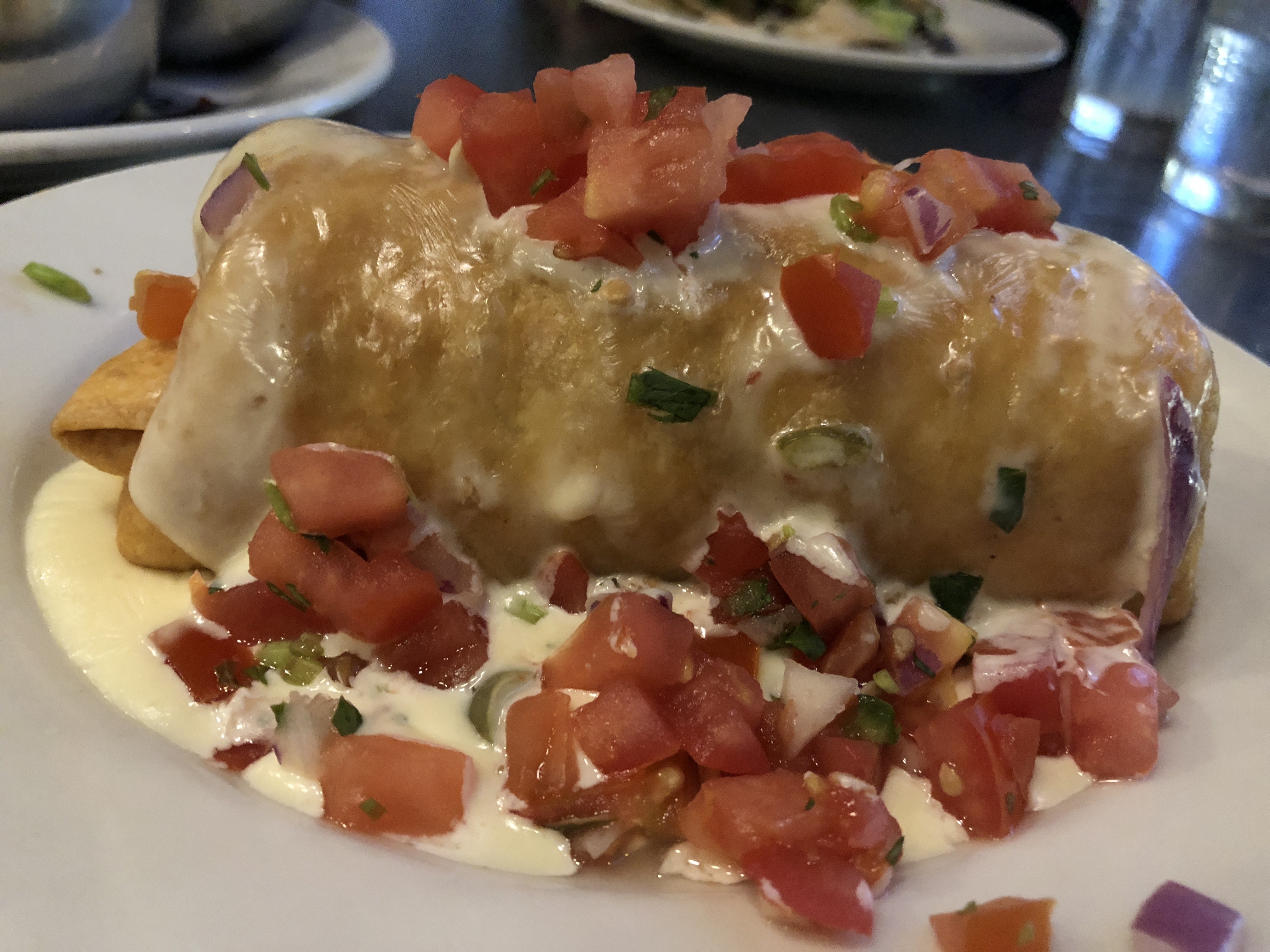 The chimichanga at Holy Taco.

“I love y’all. You just hardly ever disappoint, although I do wish you’d tamper with your menus a little more often.”
It was blasted everywhere a few weeks ago that Grindhouse could not get hold of any Impossible Burger patties, the world’s first, almost perfect vegetarian imposter of beef. The absence entitled me to my longtime favorite — the unhealthy double Apache burger. Get it with fries — the regular ones unless you like sweet potatoes scattered with cumin …. I’ve probably lunched at Eclipse di Luna, a tapas joint, more often than any other place in the city. I burn out for a few months at a time but always return. This visit I had my usual barbecued ribs but found a new dish of slightly crunchy cauliflower pan-roasted in Moroccan spices, served over a “fondue” of melted feta and fontina cheeses …. I found the perfect place to dine on Cinco de Mayo: Holy Taco. It was perfect because it was completely ignoring the holiday, so there was no real or implied mariachi madness. I had my longtime fave — the gigantic chimichanga, a Tex-Mex dish of a deep-fried burrito stuffed with sourced beef and coated with queso. Headed to Morelli’s afterward to dunk my head in a vat of salted caramel ice cream.
Grindhouse Killer Burgers, various locations in Atlanta, Decatur, and Athens. http://www.grindhouseburgers.com/; Eclipse di Luna, 764 Miami Circle N.E., 404-846-0449, and 4505 Ashford Dunwoody Road N.E., 678-205-5862, http://www.eclipsediluna.net/; Holy Taco, 1314 Glenwood Ave. S.E., 404-230-6177, http://holy-taco.com/''