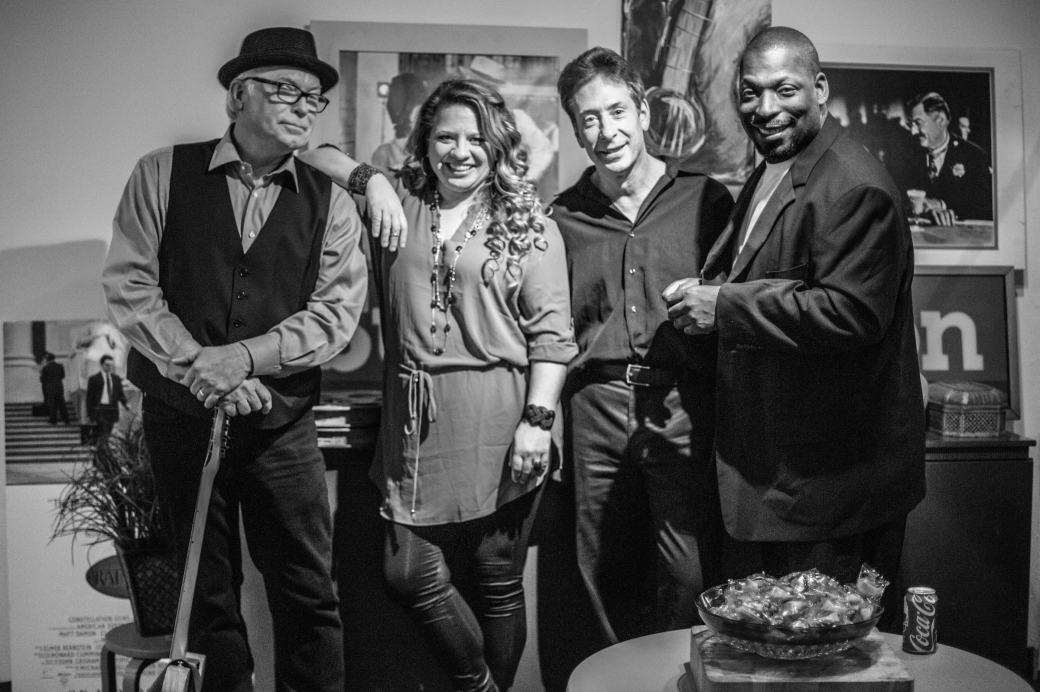 There’s plenty of activity surrounding the 50th anniversary of both Woodstock and the first Atlanta International Pop Festival this summer, with features, tribute concerts and a definitive Woodstock 38xCD box set. These were not the first major, multi-artist rock-oriented events of their era — Monterey Pop got there in 1967 — but they remain two of the most historically significant due to both their size (over 100,000 for Atlanta, upwards of 500,000 in Woodstock) and how their mostly hippie audiences reflected the flower child/socio-political nature of those times.

Even though Woodstock received the majority of press and attention due to its successful documentary, the acts that played the Alex Cooley-produced Atlanta Pop Fest on Friday and Saturday July 4 and 5, 1969, were more racially diverse and blues oriented than those on the bill at the upstate New York concert. The two shows shared many of the same roots-based artists; Canned Heat, Joe Cocker, Sweetwater, the Paul Butterfield Blues Band, Creedence Clearwater Revival, Blood, Sweat & Tears, Janis Joplin, and Johnny Winter hit the stage first at Atlanta Pop then moved to larger crowds at Woodstock. But Atlanta also had Booker T. & the M.G.’s, Spirit, the Staple Singers, Delaney & Bonnie and Friends, Al Kooper, and of course, Led Zeppelin to promote their debut release.

The music influenced Georgia musicians and business people. Delta Moon co-founder and frontman Tom Gray was at both the ’69 and ’70 Atlanta fests, but has the fondest memories of the first one. Besides the 100-degree heat (fire trucks were brought in to spray the crowd with water) he remembers, “I was a teenage kid getting a sunburn down front for Led Zeppelin, Paul Butterfield, and Booker T and the M.G.’s. The Staple Singers — four voices and Pop's guitar — were not as loud but delivered a powerful set.”

Gray talks about passing out and waking up to a blurred vision of Johnny Winter. Also stepping over bodies to see “Canned Heat with the original lineup ... followed by the closing act of the night, Creedence Clearwater Revival. It was magic.”

Larry Robertson, owner of Pine Tree Music, a management and promotion firm for legacy acts, and a cinematographer and video director, worked on the Atlanta Pop stage crew and also attended Woodstock. He felt the Atlanta gig was better organized but still considers it “barely controlled chaos.” Robertson has a vivid memory of talking with Janis Joplin who came to see the site a few days before the festival. He was especially impressed with “an opening set that Jimmy Page did where he just played acoustic and was pretty amazing,” and was blown away by both the Staple Singers and Delaney & Bonnie. Robertson also tells of the unscheduled appearance from Grand Funk Railroad, who drove down from Detroit in a beat-up Cadillac and talked their way into opening the festival. Overall he recalls the audience as “polite Southern kids.”

The music of both events still resonate with local soul/blues purveyors ThunderGypsy, winner of 2017’s Atlanta blues challenge. Frontwoman/singer Heather Statham wasn’t born when the fests happened but has been preparing her quartet for this 50th anniversary by adding songs associated with the acts into their sets. With her powerhouse voice, the Joplin material is a natural fit. But the group also includes Santana, Paul Butterfield Blues Band, Canned Heat (“Going Up the Country” is a consistent crowd-pleaser), Joe Cocker, Creedence, and the Jefferson Airplane in their shows.
“Putting our own spin on it but [[[[[[[[[[[[[[[[[[[[[[[[[[[[[[[[[[[[[[[[[[[[[[[[[[[[[[[[[[[[[[[also] just honoring the music of the event,” Statham says. “The festival was a turning point in our musical history.”

ThunderGypsy highlights its Woodstock/Atlanta Pop covers on August 22 at Roswell’s Gypsy Rose club. But the group is keeping the tunes in its set for the entire year and adding more as it progresses. The Red Light Café hosts a Woodstock tribute on August 17 with local acts playing three songs each. There is also the Rockstock in Woodstock concert the same day for those who want to experience Woodstock in its Georgia namesake city. It’s kid-friendly so leave the cussing, drugs, and nudity at home.

With our current divisive political climate, it’s a perfect time to reflect on the good music and peaceful vibes these festivals espoused.

August gets even hotter with these show highlights.

Fri., Sat, Aug. 2-3
— Tedeschi Trucks Band, Fox Theatre. With Blackberry Smoke and Shovels & Rope. Get ready for the TTB’s yearly stop at the Fox, this time for a two-night stand. Blues, soul, gospel, and jazz are all fair game for the ex-Allman Brothers Band guitarist, his singer/guitar-playing wife, and a sprawling band with three horns, three backing singers, and two drummers. Blackberry Smoke is a supporting act that can almost headline the venue on its own.

Fri., Aug. 9
— Chubby Carrier and the Bayou Swamp Band, The Vista Room. Carrier and his crew have been keeping authentic zydeco flames hot for decades, playing thousands of one-nighters and leaving the dance floor pooled with sweat.

Sat., Aug. 10
— Decatur BBQ, Blues & Bluegrass Festival, Legacy Park/Decatur. There aren’t many festivals that combine blues and bluegrass, let alone any that have been doing it for nearly 20 years. This year Honeywood handles the bluegrass, local icon Sandra Hall takes care of the blues, and headliner Randall Bramblett delivers organic blues, rock, soul, and even pop. Better still, some of the profits benefit the Community Center of South Decatur.

Sun., Aug. 11
— Peter Frampton, Jason Bonham’s Led Zeppelin, Ameris Bank Amphitheatre. This is Frampton’s farewell tour due to a recent diagnosis of inclusion body myositis, a rare and incurable inflammatory condition which causes muscles to weaken slowly. Interestingly, he has decided to leave with a pure blues album, appropriately titled All Blues, the first of his career. Opener Bonham makes no bones about being a Zepp cover band, but at least he has the chops and genes to pull it off authentically.

Wed., Aug. 14
— Mindi Abair and the Boneshakers, City Winery. Saxist Abair started out as a jazz fusion player, but gradually shifted gears to Southern rock (Gregg Allman guested as vocalist for a 2014 track). With her connection to the Boneshakers, she veers into roaring blues rock. Expect music from her new album, No Good Deed, a rollicking, swamp-rocking time featuring her honking sax sparring with Randy Jacobs’ guitar.

Fri., Aug. 16
— Shawn James, Masquerade. “I will follow you down to the gates of hell,” bellows singer/songwriter Shawn James on the opening track of his new release The Dark & The Light. And with his powerful vocals over a mix of swampy, bluesy, soulful rock, you believe him. On his fourth album in seven years, James uses his room-rumbling voice to convey hope in dark times.

Sat., Aug. 17
—The Kentucky Headhunters, Etowah River Park, Canton. Greasy, tough country mixed with blues and Southern rock doesn’t get much more blistering than the Headhunters, some of whose personnel started playing together in the late ’60s.

Wed., Aug. 21
— The Bird & the Bee, Aisle 5. Greg Kurstin and Inara George (daughter of Lowell) mix tropicalia, folk, pop, and jazz into a sweet, often playful concoction as refreshing as a cold beer on a hot day. They love rearranging rock, soul, and pop classics,so expect mellifluous and charming covers of everyone from Hall & Oates to David Lee Roth-era Van Halen, the latter the sole focus of their new album Interpreting the Masters Vol. 2.

— Marcia Ball, City Winery. Texas and Louisiana music meet head-on in the fingers of long tall Marcia Ball, whose voice is starting to show the wear of nearly 40 years of touring. But when she lets loose on those 88s, her talent is jaw-dropping.

— Eric Steckl, Madlife Stage & Studios. Blues rocking guitar slinger Steckl (he also plays keyboards) released his first album in 2002 when he was all of 11 years old. Now, 17 years later, he’s refined his attack, cranking out flame-throwing electric blues licks. He calls his music “bluesmetal” — with power, passion, and soulful vocals that keep it from going overboard. Fans of the late Gary Moore or Thin Lizzy in their prime should take note.

Sat., Aug. 31
— Hot Tuna, Variety Playhouse. Bassist Jack Casady and guitarist Jorma Kaukonen have been working together since even before their days as original members in the Jefferson Airplane, well over 50 years ago. They are as comfortable playing acoustic folk blues as plugging in and boogying. That makes their audience of old hippies mixed with generation Y jammers unique and shows the broad appeal of their often funky or fingerpicked blues.

Sat., Aug. 31
— Selwyn Birchwood, Blind Willie’s. Florida-raised Birchwood is part of the younger generation that has reinvigorated blues without resorting to infusing hip-hop or rock/metal overkill. He won Best New Artist at 2015’s Blues Music Awards, and 2017’s Pick Your Poison, his second disc for the esteemed Alligator label, showed he is in it for the long haul with his gruff, soulful vocals and gritty guitar.

Wed., Sept. 4
— Mark Knopfler, Chastain Park Amphitheater. Mr. Dire Straits has accumulated an impressive catalog of solo and soundtrack music in the 25 years since he disbanded the group. His quicksilver guitar tone remains immediately recognizable, even if the songs on his post-Straits albums aren’t. You’ll get the “Money for Nothing” hits that put the butts in these very expensive seats, but Knopfler’s talent, and especially his under appreciated solo catalog, is deep and impressive.