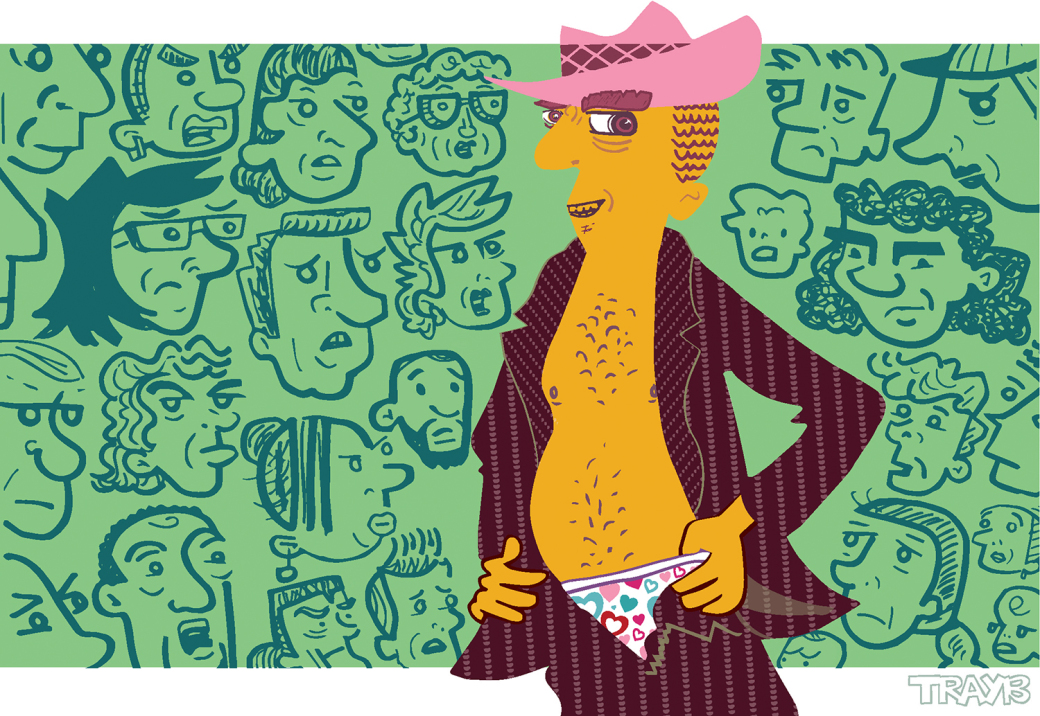 IN COLD BLOOD:  A woman pulling a wagon tried to walk into the Auburn Avenue Research Library. A security guard stopped her, insisting she couldn’t bring her wagon inside. She was free to come into the library — as long as it was sans wagon. So the woman parked her wagon outside — and attempted to walk into library. Nope. Denied. The security guard said, “You can’t just leave your wagon in front of a public building!”

“The female then asks the staff of the library if they could watch her wagon,” an officer noted. Nope. Denied again. The security guard says no one is allowed to watch library patrons’ belongings.

The Wagongate debate clearly agitated the woman. “The woman then squatted down in front of the library and began urinating,” a police officer noted. “The female then reached into her private area, pulled out a tampon, and threw it inside the library.”

The flying tampon hit a patron reading inside the quiet library. The patron, a 52-year-old woman, told police that the flying tampon landed on her right foot. Outraged, she wants to press “full charges” against the tampon-flinging woman with the wagon.

The entire tampon-hurling incident was caught on the library’s surveillance cameras. The reporting officer reviewed the surveillance footage and noted, “I did in fact see where the white female urinated in front of the property and threw her tampon inside the location.”

The woman with her wagon went to jail.

GET SHAFTED:  At Lenox Square Mall, a police officer got a call about a possibly drunk, shirtless man yelling and cursing at customers while showing them his Johnson. The bare-chested man, age 30, was wearing a sassy pink hat, a suit jacket, and black pants. A witness saw the man “pull down his pants multiple times, at one point exposing the shaft of his penis.”

The cop found the pink-hat man inside Sephora makeup store, where he was cleaning his face. “He first informed me that his pants were down, then later stated his belt was loose so he was fixing his pants — and lastly he claimed that he was working out, and that’s why his pants were down,” the officer noted. “There is no gym or workout station at the location.”

Apparently, pink-hat man likes to show off his junk on a regular basis at Lenox. “(He’s) been accused of exposing himself, trespassing, and being disorderly” on previous occasions, the officer noted.

The man, age 30, went to jail. Police searched him and found a black cellphone, headphones, and a toy car.

FAKEOUT FAIL: The City of Atlanta’s human resources manager got an email “requesting a change to payroll for Mayor Keisha Lance Bottoms,” an officer wrote.  “Although the name attached to the address states it is from Keisha Lance Bottoms, the address did not come from a City of Atlanta government email address.” Instead, the email appeared to originate from Tampa Bay, Florida.

“The email requests (the human resources manager) to assist with changing the status of payment to a new bank account, which would be provided if he confirmed he could assist.”

“After review of the email, it was confirmed that this was not an email sent by Mayor Bottoms — and she is not aware of the email address,” the officer noted. “Atlanta Information Management was notified about the phishing email, which can help prevent cyber-crime attempts like this one from happening in the future.”

STRANGE TRIP: Police got a call about a possible robbery from a hotel on Northside Drive near the Georgia World Congress Center. An injured man said he was walking through the hotel parking lot when he suddenly fell. What triggered his fall?

The reporting officer noted: “The man stated he fell because he tripped over religion. He then continued to add events to his story.”

The man said after he fell, he sat in a mystery person’s car for a while. Also, the man said he was sprinting before he fell, because someone with a gun was chasing him.

What was very real: the blood streaming from the man’s head. Police took him to Grady Hospital, where staffers determined the man was “experiencing hallucinations.” The man, age 27, lives in Decatur.

TEXAS WALKER STRANGER: At Hartsfield-Jackson International Airport, a dispute broke out at the Chop House restaurant, and staffers flagged down police. “The employees said a Texas man was talking on his phone very loudly, begging someone to take him back,” a police officer noted. “Then, he began calling patrons ‘bitches’ and ‘motherfuckers.’ When (the manager) asked him to leave, he began calling her ‘bitch’ and ‘motherfucker.’”

The man looked at the female police sergeant and said, “You motherfucker, either you arrest me or leave me the fuck alone.” Then, the Texas man apologized, saying he needed a wheelchair — and he left the Chop House restaurant. Airport staffers brought him a wheelchair, he sat down, and staffers started wheeling him to the airport’s west curb. Suddenly, the Texas man started yelling and cursing again. He screamed, “Fuck Atlanta, TI the rapper, and the President’s wife.”

When the female police sergeant walked up again, the Texas man sprang out of his wheelchair and said, “Either you arrest me or leave me the fuck alone,” while “walking toward the police sergeant in an aggressive manner.”

Then, the Texas man walked outside the airport, screaming that same refrain — “arrest me or leave me the fuck alone” — at least five times in front of children and other passengers.

The Texas man, age 47, went to jail for disorderly conduct and cursing uncontrollably. He hails from a ritzy suburb outside Houston.

WALK ON, CROUTON: Around 2 a.m. police got a call about a guy walking on I-75/85 near Spring Street. Upon arrival, the cop found a 36-year-old man strolling down the interstate. The cop stopped the man and asked: “What on earth are you doing?”

“(The man) stated that he was just walking on the highway because he saw it in movies,” the officer noted. “I explained that it’s illegal to walk on a controlled access highway such as I-75/85 … and I asked him where he was coming from and what he was doing prior to being on the highway.

“The man stated that he was stressed out about life and that his life has been very difficult,” the officer noted. “He said he just wanted to walk — and then kept on walking.”

Moments later, the man’s life became substantially more difficult. He went to jail for “walking on the interstate.”