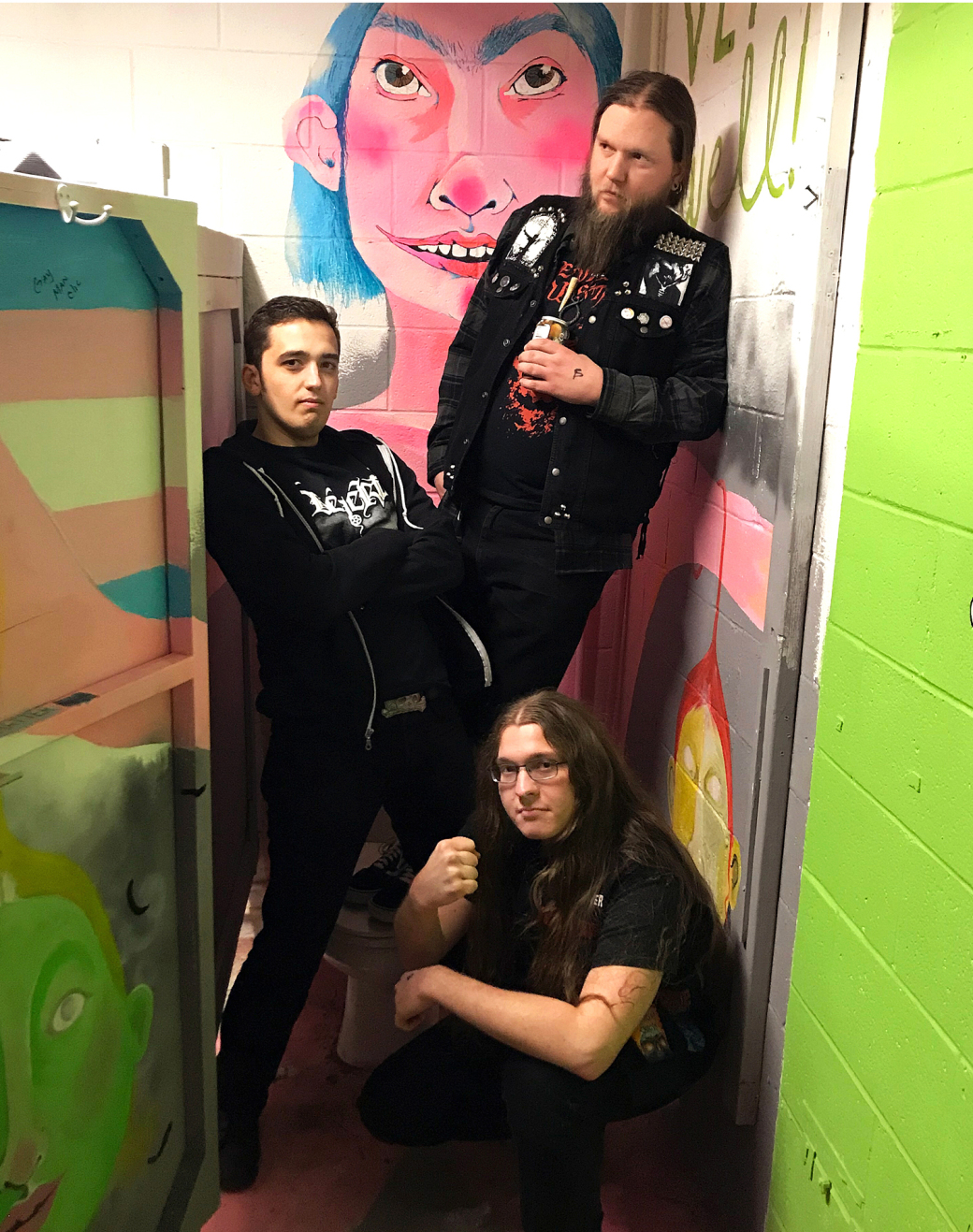 Photo credit: Chad Radford
YOU DON’T GO IN THE BATHROOM WITH ME: Misanthropic Aggression plays the Slaughter Que at the Masquerade Saturday, September 21.
By Chad Radford Thursday September 19, 2019 11:45 am EDT

On Saturday, September 21, the 8th annual Slaughter Que returns to the Masquerade for a full day of food, live metal mayhem, and fun for the whole family. Kenny’s Alley is the scene for a circus grotesque and a wild September prelude to Halloween as performance artists, sword swallowers, and more let their freak flags fly. Slaughter Que was born in 2012, when thrash/death metal band Legion X’s vocalist Syd Howell, his bandmates, and friend Rene Arriagada built the day-long festival around five bands, one pig, and 150 people. Howell has since taken over the festival, and handles production under the banner of Syd Howell Presents.

“We started the festival in the first place because I was frustrated by watching local acts never getting enough opportunities to play larger shows, and I realized, if we all work together and hammer down a plan, this could be a way to get the local acts to perform in front of hundreds of people,” Howell says. “Now it’s become a metal family reunion, or holiday if you will. I have actually heard people wishing each other a happy Slaughter Que!”

As Howell goes on to explain, whenever Legion X played out-of-town shows, the group never asked for prepared food as part of its hospitality rider. The band instead chose to barbecue meals themselves, killing hours of downtime backstage. “So when the idea to do a festival became real, it seemed like a no-brainer for us to make it a giant barbecue festival,” Howell says. “The ideas and scope have grown tremendously over the years, with the added carnival and sideshow aspects. We want to keep adding more and more things, and making it as outrageous an experience as possible,” he adds, “not just a music festival.”

Music, however, is still a driving component of Slaughter Que: All three Heaven, Hell, and Purgatory stages, as well as an outdoor stage, boast a marathon of headbanging performances from a blend of classic thrash, stoner, hardcore, and otherwise metal bands. Legendary acts such as Exodus, Kataklysm, and Exhorder share the stage with local shredders Sadistic Ritual, Misanthropic Aggression, the Callous Daoboys, Dead Reckoning, Prime Mover, and dozens more.

And while, BBQ is on the menu, there’s plenty of vegetarian fare on the menu as well. “We never want to leave anybody out, or have any feel unwelcome, so we make sure we have a variety of vegan and vegetarian options as well,” Howell says. “This year there will be portabella mushrooms, sweet corn, vegan beans, and mustard coleslaw.”

The bottom line, however, is that the Slaughter Que is always a good time, and an excellent opportunity to break bread with Atlanta’s metal scene. “If I had to pick one favorite part about the festival it would be when the headliner hits the stage, the crowd roars, and I know that we made it,” Howell says. “The work is done — or the fact that I laugh all day at the number of smiling faces, families, and more heavy metal dude hugs than you ever have seen. Basically, it’s really nice to see nine months of grueling work come together and 1000+ people show up and have a blast, like we intended.”

On Thursday, September 26, full-throttle rapper and VHS and breakfast cereal enthusiast Michael Myerz takes the lead on a co-sponsored event at the Plaza Theatre with local video rental store Videodrome, and VHS and zine label Lunchmeat.

“We are hooking up my VCR and playing it straight off VHS onto the big screen,” Myerz says.

In recent years, Lunchmeat has released two of Myerz’s VHS tapes, titled Booger Boys 3D: Revenge of the Plaque and Michael Myerz Mega Media Pack. Label owner Shafer also booked the release party for Myerz’s recently released album Dumpster Pasta, at Slim’s in Raleigh N.C.
The event at the Plaza Theatre kicks off with a VHS market in the lobby and concessions area from 7:30-9:30 p.m. Local vendors, Lunchmeat, and Retro Release Video from Washington D.C. will be selling everything from anime to horror films on VHS tapes. From 9:30-9:45 p.m., Myerz will host a Q&A with Schafer, and will probably perform a few songs as well. The evening closes out with the Video Violence screening from 9:45-11:15 p.m.

Before Bob Glassley succumbed to cancer in October of 2017, the Atlanta-based lineup of the reignited West Coast punk and hardcore outfit the Cheifs — featuring Glassley on bass and vocals, drummer James Joyce, vocalist Brad Castlen, and guitarist Scott Hedeen — went into the studio to record a four-song 7-inch EP featuring new recordings of both older and newer material.

The 7-inch is finally off to the pressing plant and is slated for an October release via Missing Fink Records. On the A-side, “1988” and “Heart In Chains” were originally written by Glassley’s pre-Cheifs band, Portland, Oregon’s the Rubbers. “Alienated” is a brand new song, and “Mechanical Man” is loosely based on a forgotten early Cheifs number, partially reconstructed from memory, and reenvisioned by the Atlanta-based Cheifs. Bill Stevenson of the Descendents mixed the songs, and the Descendents’ cover artist Chris Shary created the cover art. [Full Disclosure: CL Music Editor Chad Radford wrote the liner notes for the Cheifs 7-inch].

In other new releases news, Shantih Shantih plays the Someone, Anyone? LP release party on Friday, September 27, with the N.E.C., Amen Sister, and the Irrelevant Music DJs at 529. With Someone, Anyone? (out in the U.S. via Dusty Medical Records and in Europe via Italian label Wild Honey Records.), rhythm guitarist Anna Barattin, singer and drummer Julia Furgiuele, lead guitarist Anna Kramer, and bass player Nikki Speake return for a deep dive into songs cut from a cloth of psychedelic garage, country, and ’60s pop songwriting brought into a modern context. Press play below to hear a podcast interview with Barattin and Furgiuele.

Over the last five years, the group has slowly amassed a glut of material rooted in the dynamics of ’90s noise rock and post-punk, and displaying a truly avant-garde approach to modern paranoia. Press play below to hear a podcast interview.

The festivities begin the night before (September 20), with a Friday night pre-party at Trader Vic’s in the Hilton Hotel Downtown. The Disasternauts, the Manakooras (feat. Jeremy DeHart formerly of the Aqualads), and DJ Big Tiki Dude set the weekend in motion. Press play below to hear a podcast interview with festival founder Chad Shivers.