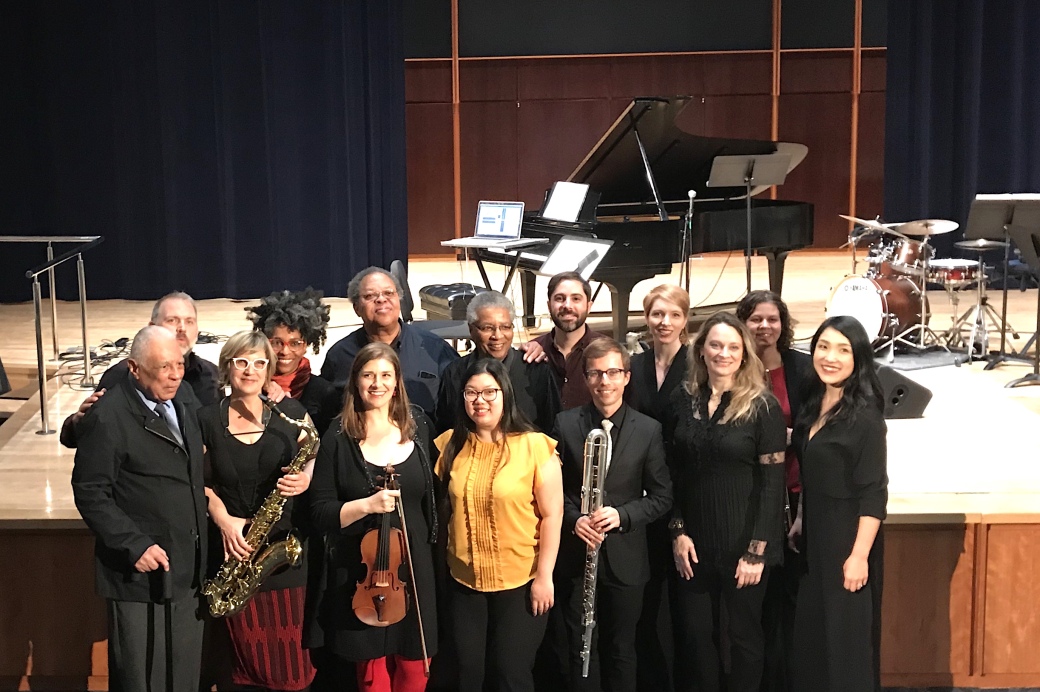 For all of its rap/hip hop street cred, rock ‘n’ roll lifer culture, and vibrant jazz, blues, soul, and roots scenes, Atlanta can also rightly lay claim to being a rallying point for contemporary chamber music. From the Atlanta Chamber Players, Atlanta Contemporary Ensemble and neoPhonia Music Ensemble to Terminus Ensemble, Cantos y Cuentos, and Bent Frequency, our city is graced with an embarrassment of large and small post-classical ensembles.

Part of the reason for this delightful circumstance can be traced to the College of the Arts at Georgia State University, where the founders of Bent Frequency, Jan Berry Baker and Stuart Gerber, as well as Nickitas Demos of NeoPhonia, are faculty educators and major influencers. For the past 15 seasons, Bent Frequency has been performing and presenting adventurous music with a special emphasis on championing work by historically underrepresented composers including women, composers of color, and LGBTQIA+.

In October, Bent Frequency kicked off its 16th season at the University of North Georgia in Dahlonega with a concert by Duo Project, aka Baker (saxophones, reeds) and Gerber (percussion). The program included two newly commissioned works, John Libertore’s A Line Broken, Traced, which the dynamic duo recently recorded, and Elainie Lillios’ Hazy Moonlight, along with Child’s Play by Amy Williams and American Beauty by Gainesville-based composer Lowell Fuchs.

With its title drawn from a poem by Iranian Nader Naderpour, Libertore’s four-movement composition calls for the saxophone and vibraphone to engage in sharp dialog, but also in a kind of lyrical relay event, the combination of which variously evokes mystical, contemplative, conflicted and playful moods. Lillios’ piece for soprano saxophone, percussion, and electro-acoustics, Hazy Moonlight was also inspired by a work of poetry, a set of five haiku by American Wally Swist. Commissioned by the Barlow Endowment for Music Composition at Brigham Young University, the work morphs through lyrical interpretations of the moon during different phases and seasons.

“We wanted to feature the two newest commissions in a ‘home’ concert setting,” says Baker in an email exchange. “Also, we love Lowell’s piece and Amy’s Child’s Play, which is an audience favorite.” Bent Frequency has performed the latter work — which is played exclusively with children’s instruments including slide whistle, Slinky, police whistle and a train whistle — more than 40 times.

The ExperiMINTal setlist includes the aforementioned Child's Play, Mara Gibson’s Folium Cubed, Jeff Herriott’s I stood on the shore and looked up at the birds, Julia Wolfe’s East Broadway, and a sensitive number for the laydeez by Irish composer Jennifer Walshe. Previously performed by Bent Frequency in March at Kopleff Recital Hall, Walshe’s work is a highly abstract, playfully dissonant score for viola, saxophone, percussion, piano, and video.

“A sensitive number for the laydeez is as much a performance-art happening as it is a work of contemporary music,” says Baker. “It’s much better suited for a more intimate space than a concert hall because the audience will be able to get up close and see, not just hear, the sounds we are playing.”

A month later, on Wednesday, December 4, Bent Frequency will present “Many Voices” at the Michael C. Carlos Museum on the Emory University campus. Featuring internationally acclaimed bass baritone Nicholas Isherwood and sound installations by students under the tutelage of Emory assistant professor Adam Mirza, “Many Voices” promises to be a uniquely adventurous program.

In his “Mediated Sound” studio curriculum, Mirza teaches recording and editing techniques with an emphasis on creating sound collage compositions using material, such as object sounds, spoken word, recorded instruments, and field recordings, discovered by students on their own. For “Many Voices,” the students will choose an object or gallery in the Carlos Museum from which to create a soundwork reflecting their impressions and reactions.

“As they build their pieces, we will consider the broader themes of the concert,” Mirza says. That means considering an enveloping sonic environment across the installations and exploring the connection between the student compositions, the musicians playing instruments and the audience members moving through the space. “The idea is to create sound pieces that 'hear' the 'voices' of other people from the past or elsewhere, as embodied by the objects.”

“Many Voices” also features solo and group performances by members of Bent Frequency and guest artist Isherwood. One of the world’s leading singers of early and contemporary music, as well as opera and chorale repertoire, Isherwood has recorded more than 50 albums. He has worked with distinguished composers such as Sylvano Bussotti, Elliott Carter, George Crumb, Mauricio Kagel, Olivier Messiaen, and Iannis Xenakis, and was a regular collaborator with Karlheinz Stockhausen. Isherwood has also improvised with luminaries such Steve Lacy, Joëlle Léandre, David Moss, and Sainkho Namtchilak.

At the Carlos Museum, Isherwood will perform Stripsody, a composition for solo vocalist written in 1966 by Cathy Berberian. Berberian’s score uses cartoon imagery and lettering, rather than conventional notation, to guide the singer through a performance, which includes imitating a radio, yodeling like Tarzan, and urging a kite to extract itself from a tree.

“I've known Nicholas for many years through Stockhausen circles,” says Gerber, who studied and collaborated with the pioneering 20th-century German composer. “When he told me he was going to be in the States, I started looking for a way to bring him to Georgia.”

The “Many Voices” program includes Gerber performing Frederic Rzewski's "To the Earth" for speaking percussionist and four flower pots; Baker interpreting Judith Shatin’s “Penelope’s Song,” a solo work for reed instrument and electronics inspired by the mythical tale of Penelope, Queen of Ithaca and wife of Odysseus; and New York-based composer Jue Wang presenting a selection from her "Bedroom Performance" series.

“The pieces will be repeated four times,” Gerber explains, “with the idea being that, since the galleries are small and intimate, the audience will hear one piece, then rotate to another place and hear another piece, until they’ve heard them all.”

Following the gallery performances, musicians and audience will move upstairs where a more "formal" program in Ackerman Hall will feature Gerber’s rendering of Mirza's “Cracks”; Isherwood performing “Hand,” a solo work for video and audio by New Zealander Eve de Castro-Robinson; and a duet performance by Gerber and Isherwood of Iannis Xenakis' “Kassandra.”

On Saturday, December 14, Bent Frequency will embark upon what has become a seasonal tradition, leading a performance of UnSilent Night in an Atlanta neighborhood. A composition by Phil Kline, Unsilent Night was written specifically as an outdoor performance during the month of December in which the public is invited to participate.

Akin to a digitally processed caroling event without the singing, Unsilent Night prescribes a street promenade during which audience members play pre-recorded tracks previously downloaded on their cellphones, boomboxes, or other devices. Since 1992, Unsilent Night has been performed in more than one hundred cities on five continents. In Hapeville, the UnSilent Night route starts at Arches Brewing and loops around the neighborhood before returning to the craft brewery.

“As in all of our past seasons,” Baker says, “Bent Frequency is featuring important, relevant, and compelling work by composers who explode the marginalized programming trend, which is prevalent in classical music.”

Incorporating multidimensional photography by Davyd Betchkal, chief soundscape technician at Denali National Park, “Sound Ecology” includes the world premiere of “You are Owling!” The work, which pays tribute to the endangered Northern Spotted Owl, was inspired by bio-acoustic field studies conducted this past summer by Wood for the Siuslaw National Forest owl research team.

Other compositions on the program are “The Apalachicola,” inspired by the Apalachicola National Forest; “Natural Sounds and Night Skies,”  acknowledging the National Park Service’s Natural Sounds and Nights Skies Division; which was premiered in a March concert at the First Existentialist Congregation; “Untrammeled,” a piece that evokes the Yukon-Charley Rivers Preserve; and “Evening,” a graphic score that interprets the energetic transference of sound at dusk.

Watching a classic silent film requires a slightly altered state of mind. The use of title cards for dialogue and narrative exposition sparks a different set of synapses than is employed for a conventional movie, while a heightened attentiveness to mise-en-scène is sometimes necessary to fully comprehend the subtler aspects of the unfolding drama. Then there is the musical accompaniment to consider.

A century or so ago, standardized practices for supplying music for films was nonexistent. To produce suitable cinematic accompaniment, soloists (usually a pianist or organist) and small ensembles drew from a mixed bag of vaudeville tunes, popular songs, orchestral works, and some original compositions. In many cases, the music was improvised on the spot, opening up a window for experimentation and innovation.

In the 21st century, a renewed interest in silent cinema preservation spawned a spate of screenings with live musical accompaniment, which in turn inspired a small subset of contemporary musicians and composers to channel their artistic impulses into this rarefied realm.

Since 2008, Lozac’h has been composing for silent films in conjunction with the Orchestre des Pays de Savoie, the Orchestre du Lycée Janson de Sailly and the Orchestre du conservatoire de Bourg-la-Reine. He has recorded soundtracks for Lobster Films, a Paris-based distribution company specializing in early cinema.

“Lozac'h's scores are wonderful treats, clean and compact with elegant melodic lines often accompanied by light orchestration lending energizing pulses,” says conductor Ting. “He combines a wide range of styles from the baroque to contemporary in a true demonstration of the past re-imagined in the now.”

Same as it was a century ago, performing a “live” film soundtrack calls for a different set of skills by members of the Georgia Tech Symphony Orchestra, who are trained to play Beethoven symphonies by the book.

“The biggest challenge for the orchestra is to match certain musical moments with the film, such as a gunshot, an object falling, or a jumping Jack-in-the-Box toy,” Ting says. “We spent much of the rehearsal practicing those moments to make sure the timing was as accurate as possible. It's been a great training experience, which will enhance the orchestra’s overall musicianship and ensemble skills.”