THE BLOTTER: Three bottles of vodka and an AR 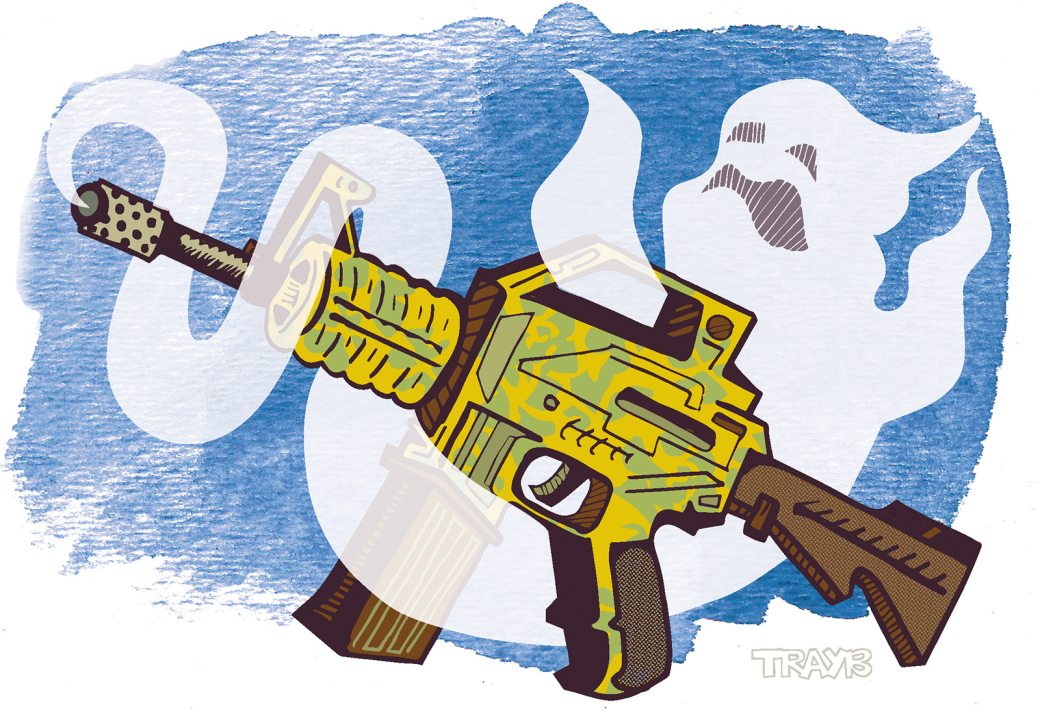 GHOST IN THE MACHINE:  In the Capitol View neighborhood, two cops were responding to an unrelated call when suddenly “we heard two gunshots erupt in close proximity to our location.”

It was pitch-black outside and well after midnight. Both cops started canvassing the neighboring property in an attempt to discover where the gunfire originated. “The location is an industrial site with numerous tools, vehicles, and other obstacles littering the establishment,” a cop recalled. ”Further, it is extremely dark with limited lighting illuminating the area.”

Eventually, the cops spotted a middle-aged man just chilling out in the parking lot. He appeared very relaxed.

“As we approached, the man was sitting on an outdoor couch surrounded by three 750-milliliter bottles of  ‘Exclusiv’ vodka. One bottle was empty, one bottle was half-empty, and one bottle was shattered on the ground with glass shards scattered throughout,” one cop recalled. “Additionally (the man) had a black .223 caliber AR-15-style rifle leaning against his leg.” (That’s a military-style automatic rifle.)

“It was apparent that he was under the influence of alcohol due to his slurred speech, red watery eyes, and a strong odor … coming from his breath,” the cop noted. “Furthermore, there were two shell casings laying in close proximity.”

The man, age 50, openly admitted to firing the gun. According to the police report, “he stated that the rifle does not have any markings indicating a manufacturer or serial number because it is a ‘ghost gun’ that he built by ordering parts online.”

The man told police:  “I fired two rounds so there should be 18 rounds left in the magazine.”

Those two gunshots are gonna cost a pretty penny.

“(He) did endanger the lives of numerous individuals including myself,” one cop noted. “Moreover, it was discovered that he is a convicted felon” with two fresh outstanding warrants.

Police took the 50-year-old man to jail on charges of firing a gun near a public roadway, firing a gun while under the influence of alcohol, and reckless conduct.

TOUCH ME NOW, RIGHT HERE: At ATL Police Headquarters on Peachtree Street, a female police investigator looked out her office window and witnessed “two men outside headquarters engaging in a form of sexual situation.”

Immediately, she picked up the phone and called police (aka her colleagues) to report the sassy shenanigans.

Officers raced downstairs and outside police headquarters — and one member of  the copulating couple fled. The female investigator identified the remaining suspect, a 40-year-old man who hails from Thomasville, Georgia.

The man “stated he was touching his friend’s penis in front of (police headquarters) because he was in a hurry to get to work, and this was the first place they found to engage in their activities.”

Alas, instead of going to work, the man went to jail, charged with public indecency. His small black-and-white bag and cell phone were turned in to police property.

BLOWN AWAY: Near Maddox Park around 6 a.m., a cop spotted a black Jeep Cherokee turning onto Pierce Avenue. “(The driver) pulled over in a darkened area of the roadway and turned the lights off,” the cop noted. “I watched the vehicle for approximately five minutes with no observed activity, which I found peculiar.”

The cop approached the Jeep and saw “two occupants spring up from the back seat as they hurried to dress themselves.” The male driver’s pants were down … and the female passenger was wearing only a “small halter top.”

The cop noted: “On the rear floorboard, where (the male driver) was sitting, there was a partially open black plastic bag, containing a box of condoms. “One of the packaged condoms was opened — as it was still on the male driver’s penis,” the cop observed.

The male driver admitted he’d been receiving oral sex from the halter-top woman. But he didn’t explain the condom wrapped around his penis. Both got tickets for public indecency.

POO-POO PLATTER: In Midtown on Piedmont Road, a 22-year-old woman called police and said a young guy just strolled onto her front porch in broad daylight and stole “20 Publix bags, which were used for cleaning her dog’s stools, and a pair of flip flops,” a cop noted.

She said the alleged thief wore a gray hoodie. Cops filed a police report and gave her a copy of the incident number.

JUST. STOP. TALKING:  An officer saw a car “traveling at a high rate of speed the wrong way down Central Street.” (That’s a one-way street, mind you). “Upon making this observation, I conducted a traffic stop and spoke with the driver, a 33-year-old Florida man.”

At first, the driver said he was just following his GPS. The cop noted, “I detected a slur in his speech, along with his mouth being dry and him to be sweating despite his car having air-conditioning. When asked (the man) admitted that he had ingested his prescription medication Trazodone along with three shots of vodka a few hours before driving.”

The cop asked: Are those two supposed to be mixed?

“No,” the driver replied.

Next, he explained the used syringe sitting on the driver’s-side floor. “I used it to shoot meth about an hour ago,” the Florida man confessed. Finally, he then admitted that he’d been arrested on DUI charges just nine days ago. None of his rambling admissions helped his conversation with the cop.

The Florida man went to jail for his second DUI in under 10 days, plus charges of reckless driving and driving the wrong way down a one-way street.

BITE ME: One morning, a 31-year-old man drove his white van to work at a hotel on Forsyth Street in downtown Atlanta. A 25-year-old woman in blue camouflage was sitting in the parking lot. She was clutching a Mystic glass bottle broken in half.  Suddenly, she started screaming: “Where’s my momma at? That’s her van!”

Then she demanded the man hand over a sausage before she attempted to stab him. “(The man) stated he jumped back and told her to get away … and he was unharmed because his belt had blocked the impact of the glass bottle.”

The screaming woman threw down the glass bottle and ran away. But not far enough.

When police arrived, the man was able to point out the woman because she was now sitting on a nearby sidewalk. Two cops grabbed her by the arms. The woman responded by allegedly using her teeth as a weapon and “biting down on an officer’s arm.”

According to the police report, the woman “took advantage of the surprise attack” and “went for another bite.” After the second chomp, the bitten cop’s partner took out his Taser gun and subdued the woman, who yelled, “You’re not helping me!”

Police put a spit hood on the woman and took her to Grady Hospital to be tested for any potential diseases that could potentially be transmitted by mouth.

DUMP THAT “DELIVERANCE” GIRL: Outside a convenience store on Sylvan Road, a 30-year-old man said he was shot in both legs while sitting in the driver’s seat of his Chevy Impala. The alleged shooter: a colorful relative of the man’s fiancée … who wears his hair in a red/burgundy Mohawk with dreads.

The reporting officer noted: “The victim’s fiancée arrived on scene and was told that the suspect was her ex-husband and possibly his brother.”

Wait, what? The alleged shooter was both her ex-husband and his brother? The police report did not clarify.

The fiancée stated the suspect has had an issue with her man ever since they started dating back in 2018.

Police escorted the wounded man to the hospital and collected shell casings from the roadway. His injuries were non-life-threatening.