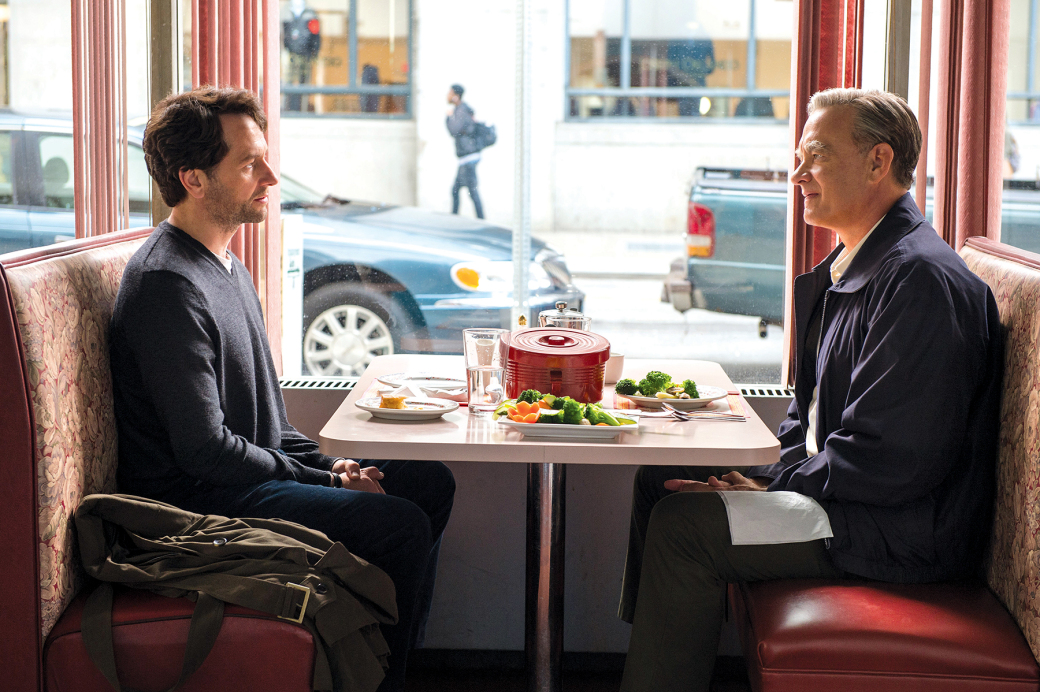 Perhaps the most usual and affecting new movie to watch at the holidays has almost no apparent Christmas content at all. The dramedy A Beautiful Day in the Neighborhood eschews wrapping-paper color schemes and remixed Christmas carols, but provides a uniquely powerful exploration of such ideas as good will and forgiveness, which often receive little more than lip service in the average holiday movie.

Tom Hanks plays Fred Rogers, the beloved, cardigan-wearing creator of “Mister Rogers’ Neighborhood.” The film is no biopic, though, but draws inspiration from the 1998 Esquire magazine profile “Can You Say… Hero?” by journalist Tom Junod (currently a Marietta resident). Matthew Rhys plays Lloyd Vogel, a fictionalized version of Junod who’d rather write a hard-hitting expose than a 400-word puff piece on a saintly children’s TV host.

The screenplay, directed by Marielle Heller, frames the story as an episode of “Mister Rogers’ Neighborhood,” with Lloyd, incongruously, as a special focus. Transitions show New York City and Rogers’ Pittsburgh home as miniature models in the style of the show’s opening. Rather than play as ironic comedy, Neighborhood embraces a more bittersweet surrealism, tonally comparable to Spike Jonze’s Where the Wild Things Are. Rogers famously avoided talking down to children in exploring how to deal with emotions and occasionally difficult issues such as death and divorce; the film uses vintage videos and an extended dream sequence to apply a similar sensibility to a grown-up audience.

Perhaps Neighborhood spends more time with Lloyd’s family scenes than it really needs, but it earns its moments of catharsis. As Rogers dismantles Lloyd’s cynicism, it doesn’t over-sentimentalize Rogers. He makes time for young fans no matter how much it puts his show behind schedule, to his colleagues’ consternation, and emphasizes that niceness is a practice: Being Mister Rogers is something he loves, but also something he works at.

Late in the film, Lloyd and Rogers share a moment of therapeutic silence that, in its softness and duration, feels boldly different from a conventional Hollywood movie scene. Hanks holds an extended, wordless close-up that would be uncomfortable if the actor weren’t as beatific as Buddha. It’s one of many moments that can bring a viewer up short, to wonder “Why not try and treat other people with more compassion?” A Beautiful Day in the Neighborhood can make you reconsider your own behavior, no matter what time of year you see it.

The latest Star Wars film, The Rise of Skywalker, opens December 20 and has not screened at press time. But if you crave a family-friendly sci-fi spectacle that’s closer to home than a galaxy far, far away, local writer Jon Waterhouse has published a story in the 22nd issue of the comic book Star Wars Adventures focusing on the tauntauns — those goatlike alien steeds Luke Skywalker rode in The Empire Strikes Back. Waterhouse will be signing copies of the issue on Thursday, December 12 at Decatur’s Little Shop of Stories.

December 12 will also see a special screening of the 1984 horror comedy Gremlins at the Plaza Theater. Star Zach Galligan is scheduled to be on hand for director Joe Dante’s bratty but beloved film about how a band of little monsters wreak havoc over Christmas at a small town.

Fans of reality television and unusual documentaries should check out 63 Up when it opens at Landmark Midtown Art Cinema on December 13. The ongoing project began in 1964 when the BBC profiled 14 seven-year-old children, and director Michael Apted revisited them with a new film every seven years since. The ninth episode, 63 Up, finds the subjects in their 60s, measuring their youthful dreams against their middle-aged realities, and offers a one-of-a-kind portrayal of life across half a century.

Finally, if you’re looking for holiday gift ideas with an Atlanta movie fan in mind, consider a T-shirt from the venerable video store Videodrome, which offers three designs at $25 a piece. You can support a landmark of local film culture by both buying one and wearing one. -CL-