BLUES & BEYOND: DON’T PASS HIM BY 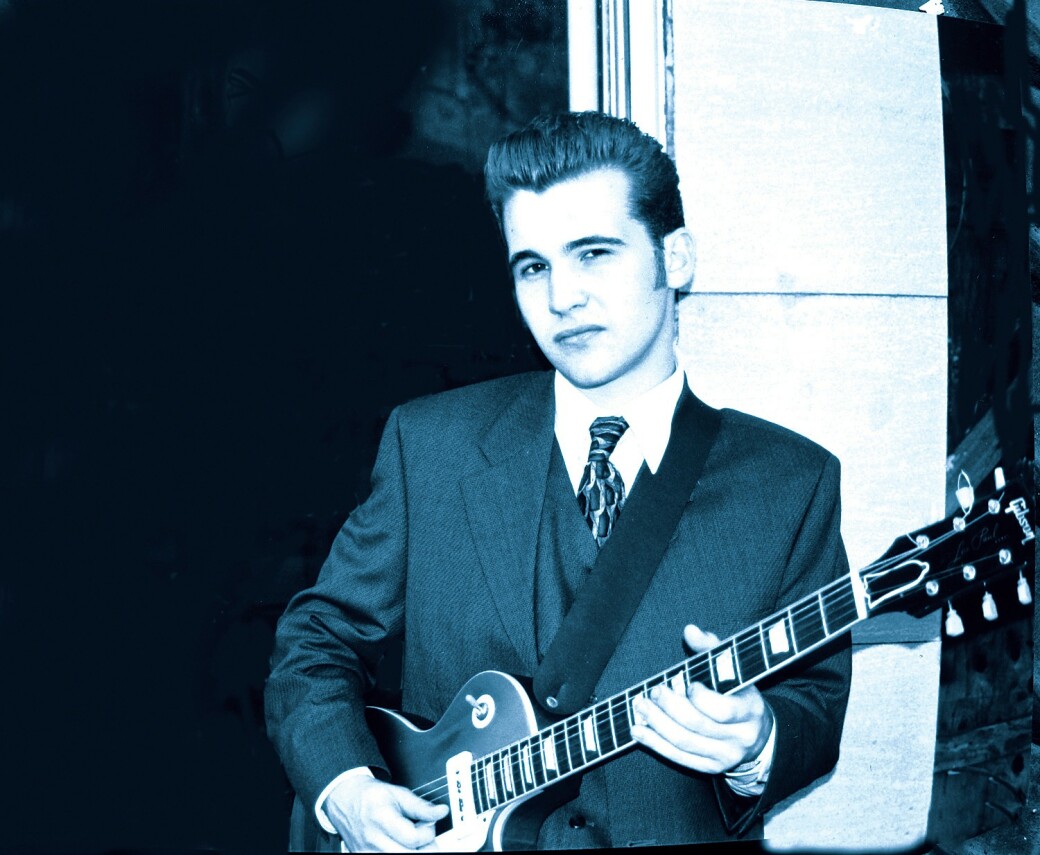 The astonishment and grief that coursed through the Atlanta blues community with the news of guitarist/singer/songwriter Sean Costello’s untimely passing on April 15, 2008 — a day before his 30th birthday — are in many ways still being felt.

Costello was a blues/soul artist on the rise. He seemingly had it all; rugged yet heartfelt vocals, an expanding understanding of quality blues and soul songwriting, guitar chops respected by established blues lovers … and he was easy on the eyes too. His then most recent album, 2008’s We Can Get Together, was widely praised as his finest work to date. Here was a wildly talented roots musician, who had supported Susan Tedeschi both live and in the studio, making waves as a national and internationally appreciated solo artist. But Costello’s inner demons, aggravated by a bipolar disorder, were known to only a few. That made his premature passing all the more sudden and shocking, especially in the Atlanta blues community, where his abilities had been honed through years of club dates and strong connections with followers and fellow musicians who nurtured his playing early on.

It was something of a surprise when Don’t Pass Me By, a tribute to Sean Costello, suddenly appeared with little fanfare in October 2019, a decade after his death. The disc — featuring a variety of mostly nationally recognized blues acts such as Albert Castiglia, Seth Walker, Debbie Davies, Nick Moss, and the North Mississippi Allstars, along with a few locals (The Electromatics, Sonia Leigh, Oliver Wood) — is comprised of 15 interpretations of the bluesman’s original and occasionally co-penned compositions, predominantly from his four final years.

Nearly 10 years in the making, it’s a labor of love from producers/Costello fans Jon Justice and Dave Gross; Landslide, the label that initially signed Costello; and the artists, none of whom were paid for their work. According to Debbie Costello-Smith, Sean’s mother, Justice “was the one who contacted all the musicians and kept pushing them. It was really hard and took almost a decade. Most (contributors) sent in a tape that was either finished or something that needed to be mastered… and it was all pro bono.”

Co-producer Gross explains that in 2009 Justice approached him with the idea. “We felt that a tribute of this caliber was owed to somebody of Sean’s level. Sean contributed so much in such a short time that it felt natural to give back in some small capacity. He was the best of the best.” As for who got tapped musically, that was up to the producers. “We had specific people we wanted to ask. Ninety percent were artists we had in mind and felt would be excellent covering specific songs. The majority we reached out to were more than glad to contribute.”

Ultimately, so many musicians wanted to take part that some higher profile names like Tinsley Ellis weren’t approached. Once the buzz got out in the blues community, Gross had to turn down others who wanted in. “It’s been awesome to see an outpouring from so many different artists for someone who really deserved this kind of recognition.”

The age diversity of contributors was also impressive. “No matter how young he was, people from my generation (early 30s) all the way to the last of the legends out there respected him,” says Gross. “Bob Margolin (Muddy Waters’ guitarist who covers “Low Life Blues” in an appropriately raw, lowdown Chicago style) didn’t know Sean well personally, but there was something musically (about Costello) that he respected. I mean, he has played with the greatest.” Unfortunately, contributors like Candye Kane (“I’ve Got to Ride”) and the Nick Moss Band’s singer Michael Ledbetter (“Hard Luck Woman”) are no longer with us to see the fruits of their selfless labors.

Though Costello-Smith titled the album (she felt Costello’s song “Don’t Pass Me By” fit the concept), she wasn’t connected to the project as it was happening and had no input regarding the acts, songs, or performances chosen. “It was a surprise to me,” she says. As for Justice and Gross, their idea was just to deliver the music. “We had no plan in place to get the music heard,” Gross says.

After receiving the finished master tape in July 2019, Costello-Smith contacted Michael Rothschild, owner of Landslide and a longtime friend of the Costello family, who agreed to release it. Better still, all the profits go to the Sean Costello Memorial Fund for Bipolar Research, established by Costello-Smith after her son’s death.

Despite the diversity of those involved, Gross and Justice have assembled a classy, professionally conceived, and above all reverent album that flows well. It not only displays Costello’s songwriting strengths but will hopefully introduce him to those too young to have been around when he was alive. Don’t Pass Me By also raises Costello’s status as one of the finest bluesmen Atlanta has produced, a testament to the city’s vibrant blues scene that still mourns the loss of one of its most promising stars.

Start the New Year off right with these January Blues and Beyond highlights:

Delvon Lamarr Organ Trio, Terminal West. Get into the soulful jazz organ groove to warm up on this likely chilly January night. The sound is straight out of swinging ’60s London, as Lamarr hits the Brian Auger/Booker T.-styled keyboard vibe, and the band jams along with taut yet swaying precision.

Travis Meadows, Eddie’s Attic. Life has been a long, strange, and often difficult trip for the 50-something, cancer-surviving singer/songwriter, but Meadows is now hailed as one of Nashville’s finest and most powerful writers. Better known for penning tunes for others, his 2017 solo album First Cigarette found him as tough and lyrically potent as Bruce Springsteen, just without the roaring band behind him.

David Bromberg, Eddie’s Attic. Multi-instrumentalist Bromberg might have started his career as a ’60s folksinger, hanging out with the New York City elite like Bob Dylan and Richie Havens, but he shifted into a soulful, even funky, rocker, then quit touring altogether to focus on building violins. He returned to the road in 2016 with a focus on blues, so expect plenty of skewed patter about his colorful life between swinging blues covers and originals.

Grace Potter, Tabernacle. Potter got plenty of pushback when she abandoned her bluesy, jam rock roots to go slick pop with her 2015 album, Midnight. Now, she has rebounded [[[[[[[Valentine produced the 2015 album so is not new] and returned to her more soulful beginnings on the recently released Daylight, a strong set that should mend Potter’s cred with her original fans.

Booker T. Jones, City Winery. Sure you’ll get a set of the renowned blues/soul organist’s music, but this intimate evening starts with Booker T. reading from his new autobiography Time Is Tightand hosting a Q&A from the audience. It’s an especially personal experience since you get the Stax legend’s extensive history firsthand along with hearing the “Green Onions”-era hits directly from the source.

Felix Cavaliere’s Rascals, Center Stage. We’re not sure who the current Rascals are, but even in his mid-70s, singer/songwriter Cavaliere still has those powerful, soulful pipes that drove such timeless classic ’60s pop radio gems as “Groovin’,” “A Beautiful Morning,” and the iconic “People Got to Be Free.” Prepare to sing along with a concert venue full of your new best friends.

The Steel Wheels, Eddie’s Attic. This rootsy quartet has been mixing country with bluegrass since 2010, but moved into a more rugged Americana with their recent Over the Trees. It’s arguably the band’s finest work, with immediate vocals and sturdy melodies pushing their acoustic sound in fresh, new directions that remain organic, but with grit.

Scott Mulvahill, Eddie’s Attic. There aren’t many frontmen singer/songwriters who also play standup bass. Mulvahill doesn’t use that unique attribute to obscure his soulful, gospel and jazz-tinged Americana. His youthful, Jackson Browne-styled vocals and slinky songs connect largely due to his elastic and compelling bass lines, but also because his music is fresh, vivacious, and grounded in blues.

Yola, Terminal West. If there was a breakout, UK-bred Americana star this year, it’s Yola. Her Walk Through Fire debut album combined country, soul, gospel, blues, and sweeping Phil Spector pop into a Dusty in Memphis-styled tour-de-force, helped by producer and Black Keys frontman Dan Auerbach. Her powerhouse voice and gutsy songs explode live, so don’t miss this opportunity to catch her in an intimate venue.

Robben Ford, City Winery. In a career that spans over four decades, jazz/blues/rock/fusion guitarist (and sometime sax player) Ford has worked with everyone from Barbra Streisand to George Harrison and Miles Davis. Not just a supporting six-string slinger, he’s a more than capable singer as his recent songwriter-based Purple House proves. He doesn’t play Atlanta often; this is a rare chance to catch a slightly under-the-radar legend.

The Dead South, Buckhead Theater. Despite the Southern leaning name, this is a Canadian acoustic string quartet. Their latest album, Sugar & Joy, landed atop the Billboard bluegrass charts, guaranteeing headlining status at larger venues. Their lineup includes a cellist (!), unique for mountain music, giving them a more distinctive approach, especially when they rock out.

Rainbow Girls, Eddie’s Attic. This West Coast trio mixes folk, blues, and dusky pop with sweet, sublime harmonies for a stunning sound that doesn’t even need instrumental accompaniment to connect. Imagine the Mamas without the Papas and you’re close to the Golden State vibe these women conjure.

Taj Mahal, Rob Ickes & Trey Hensley, City Winery. Taj Mahal is not just an iconic bluesman, but an artist whose eclectic musical vision includes world, reggae, and Hawaiian styles. Nonetheless, it’s folk-blues that he’s best known for, though a recent Grammy win for his work with Keb’ Mo’ on 2018’s TajMo shows he’s constantly pushing boundaries. Arrive early for the opening guitar duo who will blow you away with their country and roots shredding.

The Devil Makes Three, Variety Playhouse. Call ’em punk bluegrass if you must, but there is no doubt that this West Coast act (now expanded to a quartet) has pushed their mountain music way into the red. It has been a gradual transformation since their 2002 debut, yet frontman/songwriter Pete Bernhard has been the glue that keeps this edgy roots band rocking.

Tinsley Ellis, City Winery. Atlanta’s soul/blues rocking pride and joy, and its hardest touring bluesman, returns to feature songs from the newly released Ice Cream in Hell. His sixth album in seven years finds Ellis as prolific as he has been since slogging it out in local dives with the Heartfixers all those decades ago. Come out and show him some hometown love.

Lost Dog Street Band, Terminal West. Guitarist/singer Benjamin Tod and fiddler/artist Ashley Mae helm this acoustic trio that has been steadily working the Americana roots scene since 2011. These old-school styled troubadours spill out a saucy combination of Appalachian folk, classic country, and rustic blues with the raw, raucous, and rambunctious energy of a hungry street band playing for tips. — CL —