THE BLOTTER: You break it, you stole it 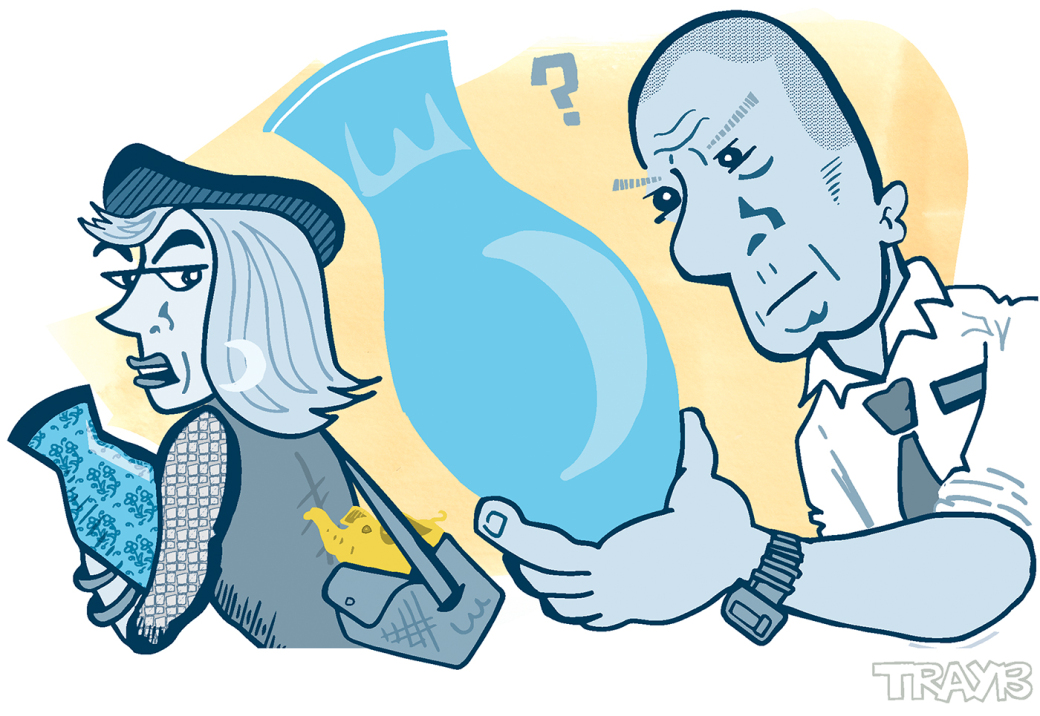 PUTTIN’ ON THE RITZ: Yes, you can actually get arrested for stealing items from your hotel room. A 42-year-old woman who calls herself “Winter Moon” tried to rip off the Buckhead Ritz Carlton Hotel on Peachtree Road — by snagging two wildly expensive vases worth $5,000 total. But apparently, she didn’t check her grip.

As Winter Moon walked toward a hotel exit door, she “dropped one vase, causing it to smash to the floor,” a Ritz security guard noted.  So she’s just destroyed a $2,500 vase that she was trying to steal.

The guard said he approached the woman and asked her: Why are you trying to leave the hotel with two Ritz vases? “All she said was that she was sorry,” the guard recalled, adding that she refused most of his questions. The only information he obtained: Her name is “Winter Moon,” and she hails from Loganville.

Initially, the security guard decided to go easy on Winter Moon — and not bust her for stealing or call police. Instead, the guard was willing to let her go, if she agreed to a physical search and then immediately left the Ritz Carlton hotel. Alas, Winter Moon agreed to a body search — and the guard found another pilfered item hidden in her bag: a gold Ritz elephant. Still, the guard let her go free. Then, Winter Moon departed the luxury hotel in an Uber. Her failed Ritz Carlton rip-off wasn’t reported until the next day, when the security guard apparently realized his Ritz managers needed a police report for an insurance claim to replace that fancy $2,500 blue vase shattered in Winter Moon’s clumsy grip. So the guard called police, and now Winter Moon’s attempted crime could land her in trouble.

JUST PLAIN BALLSY, PART 1: Also in Buckhead, someone stole a blue Lamborghini worth at least $200,000 from a car wash on Piedmont Road. In broad daylight. During Atlanta rush hour. The car-wash manager gave police surveillance video, which clearly shows a black Dodge Charger (occupied by at least two men) stopping near the unattended Lamborghini as the two cars were in the “wash” tunnel. Then, one passenger exits the Dodge Charger and steals the 2019 Lamborghini Urus. The Lamborghini theft happened between 6:52 and 6:53 p.m. The Lamborghini was last spotted heading down Piedmont Road toward Buford Highway.

ROAD RAGE ENDS IN MOUTH: A 56-year-old Tucker man said a female driver in a Dodge Charger almost hit his 2019 black Lexus as he entered the intersection of Peachtree Road and Ralph McGill Boulevard, near the 85/75 ramps. The Tucker man said he caught up to the female driver and asked her: Why are you driving so fast?

“It’s a free country. I can do what the fuck I want,” the female driver replied.

The Tucker man called police, claiming the interior of his Lexus was damaged and giving police the female driver’s license plate number. The reporting cop noted. “I observed an unknown substance splashed on (his) car.”

And the Mystery Liquid? No further clues on the soggy spray landing in the Tucker man’s mouth and car.

So then, they have sex.

“Both were in bed when the ex-girlfriend suddenly said, ‘I love you,’” the cop noted in his police report.

And how did the 25-year-old man respond? Well, he did not say “I love you” back. That’s when his naked ex-girlfriend started screaming and yelling. The man stepped out of his bedroom long enough to call some guy to come pick up his ex-girlfriend. But the guy wants to have a long phone conversation. Eventually, the 25-year-old man walks back to his bedroom: Now his naked, drunk ex-girlfriend is holding a black-and-silver handgun and she’s “waving it in the air.”

The man asks the ex-girlfriend to put down the gun. Several times. At one point, the ex-girlfriend allegedly points the gun at him and says, “Watch. I’m going to do it.” He calls 911. The naked ex-girlfriend decides to get dressed and leaves his apartment, still toting her gun, before police arrived.

No one was injured. But the man filed a police report about the ex-girlfriend’s naked gun threats.

BITCH WITH A DOG: A married man and woman in their 20s walk into a clothing store on Metropolitan Parkway. The wife has an alleged service dog.

Immediately, the store manager tells the wife that she has to leave the store with the dog. (Um, hey, is that legal? Service dogs allowed almost everywhere, right?)

After a brief discussion, the wife pulls a weapon out of her purse, points it in the direction of the store manager, and says: “I have a gun and you don’t.”

Then, the wife promptly departs the store with her alleged service dog, and drives away in her Chevy Cruze — leaving behind her husband. Perhaps not the sharpest knife in the drawer, the husband is still hanging out in the clothing store when police arrive. Hubby refuses to give cops any information on his wife. Twenty-eight-year-old hubby gets written up in said police report.

PISSED-OFF GIRLFRIEND’S REVENGE: A drunk couple got into a spat at a Peyton Road apartment complex. The boyfriend and girlfriend (both in their 40s) live in separate apartments next door to each other. According to the boyfriend, every night they hang out, play cards, and drink beer in one of their adjacent apartments. But tonight, trouble erupted during a card-game disagreement.

The boyfriend says they were just “chilling and drinking” until they started bickering over the card-game rules, which somehow led to the girlfriend urinating on his clothes to get revenge over his (possible) lack of fidelity. So he called police to settle their spat.

The girlfriend freely admitted to police officers that she peed on his clothes. Also, the boyfriend admitted to hitting her, “but he also mentioned that his girlfriend was already mad due to the fact that she thought he was cheating on her … and he hit her out of self-defense,” wrote the reporting officer.

The girlfriend, age 42, was extremely intoxicated and “loud,” noted the cop, who decided she was the primary aggressor and took her to jail.

JUST PLAIN BALLSY, PART II: A 45-year-old female manager of a Dollar Tree store on Cascade Avenue called police and reported a strange crime. She said while she was working the previous night around 6 p.m., a man called her store’s landline phone and identified himself as a Dollar Tree district manager. She said the male caller ordered her to 1) close the store early, 2) remove all money from the store’s registers and safe, and 3) leave only $35 cash in the store. Then, the male caller told the female manager to wait a few minutes, and then call him back on her cell phone to receive further instructions.

The weird part: So the female manager says she complied with the male caller’s demands, emptying the Dollar Tree store’s safe and registers of more than $2,700. She even leaves $35 cash in the store, as the caller insisted.

Then, she waits and calls him back on her cell phone. She says the male caller orders her to walk across the street to Kroger and buy disposable, reloadable debit cards. She said the caller warned her that someone will follow her to Kroger to ensure she actually does as she’s told.

So the female manager goes to Kroger and deposits $2,700 onto reloadable debit cards. Then, she says, the male caller orders her to scratch the back of the debit cards to reveal the passcode numbers — and read those numbers to him.

The female manager says she does all this, and then the male caller promptly removed most of the $2,700 from the debit cards. She adds: The caller told her to keep two disposable debit cards on her, and he’d get those card numbers the next morning — and then he kept on texting and calling her cell phone into the early hours of the morning.

Yes, this is the story that the female manager tells her Dollar Tree boss to explain why her store is missing almost $2,700 from the safe and cash registers. Her boss promptly calls police.

“No,” the female manager replies.

Does she have any proof? Or evidence? Well, the female manager does have Kroger receipts for all the disposable debit cards. She turns those over to police.

Nope, that’s a firm negative, according to the Dollar Tree boss.

So the cop arrests the female manager, age 45, who’s been on the job for four months. Then, he runs a computer check on her criminal record: Turns out, the female manager has two warrants — one for shoplifting in Milledgeville, and another for larceny in Baldwin County, Georgia. Yup, she’s going to jail for scamming her employer, Dollar Tree, of nearly $2,700. — CL —