MY BODY, MY VOICE: We don’t need a big tent to accommodate this ‘pro-life’ circus

A litmus test for presidential hopefuls 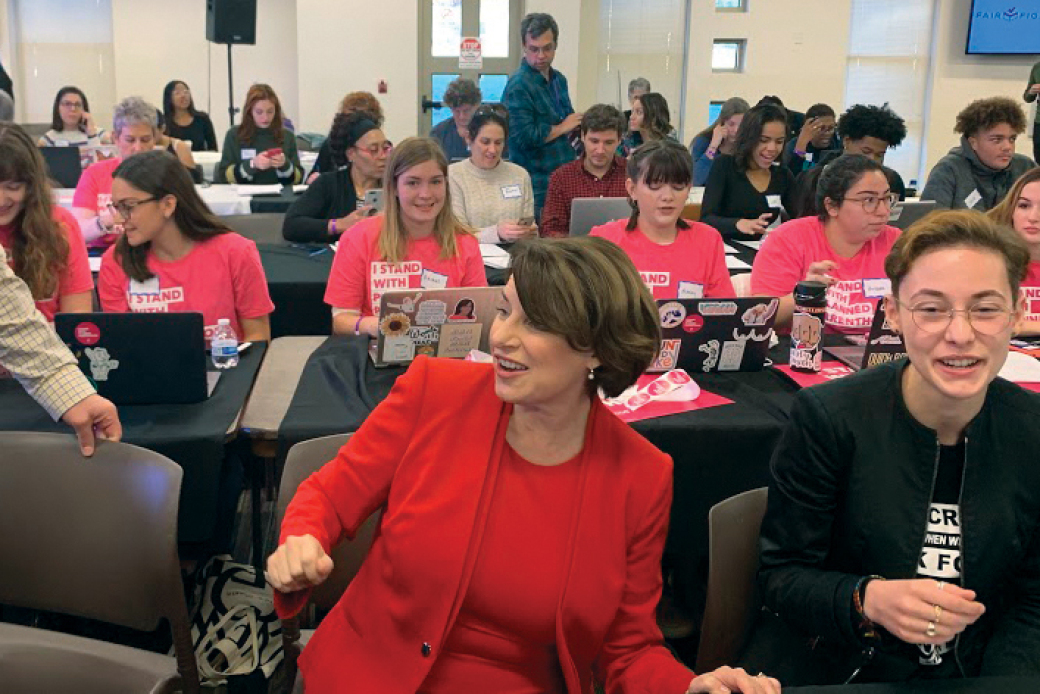 Back in February, Senator Amy Klobuchar appeared on the daytime television show “The View” and was asked whether or not she thinks “there’s room for pro-life Democrats to vote for [her].” Klobuchar, who describes herself as “pro choice” and is an advocate for reproductive rights and health, responded by saying that the Democratic Party is a “big tent party, and there are pro-life Democrats, and they are part of our party … I think we need to bring people in instead of shutting them out … and that includes independents and moderate Republicans.”

It’s a question that all of the presidential candidates have been asked in one way or another, and it got me thinking about another question I often hear: Should reproductive rights be a “litmus test” for presidential hopefuls — or for any lawmaker, for that matter?

First, it’s probably helpful to define what a litmus test actually is. According to Merriam-Webster, literally, a litmus test determines acidity or alkalinity. Figuratively, it describes any single factor that establishes the true character of something or causes it to be assigned to one category or another. Now back to the question at hand: Should reproductive rights — specifically, abortion rights — be a litmus test for candidates? The answer is a resounding YES. Certain positions — including being anti-abortion — are corrosive to our health, safety, freedom, and our very lives. There is nothing wrong with looking critically at a candidate’s platform and figuring out whether your future is at stake based on their position. If your bodily autonomy isn’t a worthwhile litmus test, I don’t know what is.

If there was ever any doubt, the past year has made it all too clear just how important this litmus test can be. With Trump in office and Republican lawmakers in a race to see who can come up with the most regressive policies possible, the impulse to embrace “pro-life” Democrats is having real consequences around the country. As Rewire.News reported last month, “Democrats in the Louisiana legislature have made it possible for Republicans to push through a range of anti-choice laws; Louisiana Gov. John Bel Edwards (D) last year signed a near-total abortion ban. Anti-choice Democrats in Rhode Island’s legislature for years stalled pro-choice legislation. In New Mexico’s legislature last year, a group of Democrats sided with Republicans to defeat a bill that would have eliminated a pre-Roe ban on abortion. And just this month, Democrats in Florida’s House refused to take a stand against anti-choice legislation that could open the door to a cascade of restrictions.” We have even seen the effects here in Georgia. Last year’s six-week abortion ban passed by just two votes in the House, one of which was a Democrat. The urge to invite out-of-touch, anti-abortion lawmakers into this “big tent” has made it possible for sweeping abortion restrictions and outright bans to be enacted in Georgia and across the country, and it has blocked progressive legislation that would have restored or expanded access to health care and reproductive rights.

Beyond so-called “pro-life” Democrats, Klobuchar specifically referenced independents and moderate Republicans, saying “we need to bring people in instead of shutting them out” when it comes to reproductive rights. That line struck me because the fact is, we already are! The persistent myth that independents and moderate Republicans are wholly anti-abortion seems to be at the root of many of these conversations, as though abortion rights is a major debate Americans are having. The fact is, most Americans, 77 percent to be exact, want the Supreme Court to uphold Roe v. Wade — and that number includes a majority of independents and even a majority of Trump voters. The politicization of health care (because yes, abortion is health care) is being perpetuated by politicians and a very small (but vocal) minority of anti-abortion groups and individuals. Meanwhile, candidates are pandering to a select few on the fringes in an effort to solicit a handful of votes, thereby alienating the vast majority of Americans. Politicians like Klobuchar can keep talking about being a “big tent party,” but as it turns out, they’re the only ones who want to come to this circus.

Although most Democrats won’t call themselves “pro-life” outright, here in the South I often hear lawmakers (and even some Planned Parenthood supporters) say things like, “I am pro-choice and pro-life,” meaning that they support other people’s right to make their own reproductive health care decision, but they wouldn’t have an abortion themselves. I am always struck by what a condescending and self-aggrandizing statement that is. When asked about your stance on reproductive rights, you either support them or you don’t. Your own theoretical reproductive choices are irrelevant and serve no purpose other than to make yourself feel morally superior to the one in four women in this country who will have an abortion in their lifetime. And actually, saying you’re either “pro-choice” or “pro-life” is becoming antiquated anyway. Many people don’t identify as either label anymore. These phrases have become so politicized and loaded that many people opt out altogether. So it’s pretty obvious to most folks that when you say you’re “pro-choice” and “pro-life” you’re just trying to have your stale cake and eat it too.

Ultimately, the idea of a “pro-life Democrat,” “pro-life Republican,” or “pro-life independent” misses the point entirely. I don’t actually care what reproductive choices a lawmaker would make for themselves. The same goes for voters. I respect each person’s decision to start or expand their family, pursue adoption, or terminate a pregnancy. You can call yourself “pro-life” all you want (although I really wish you wouldn’t — it’s so tacky), but the bottom line is you shouldn’t be dictating other people’s most personal, private health-care decisions, and our lawmakers shouldn’t be either. So when it comes to whether or not we should allow anti-abortion lawmakers into the party tent, as my friend Catherine always says, “Flaps down.” —CL—

Elections begin this month! Now is the time to make sure you’re registered to vote. Check your registration here. Register online or download a voter registration application here.

Want to know where the 2020 hopefuls stand on sexual and reproductive health and Rights? Visit www.plannedparenthoodaction.org/presidential-candidate-profiles to find out.