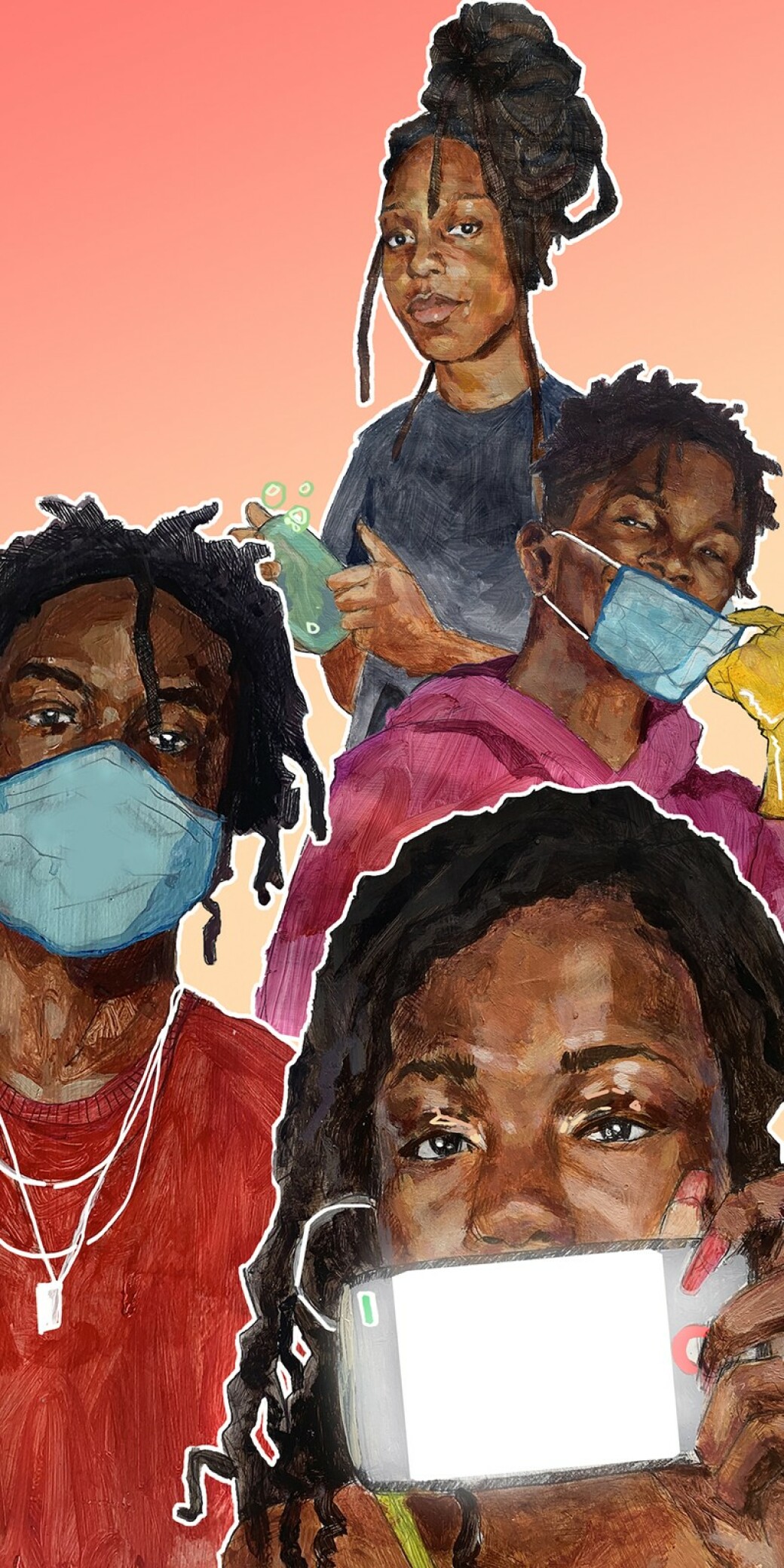 Photo credit: Demetri Stefan Burke
TRYNA GET AWAY: Atlanta Hip Hop is distancing itself from the horrors of the ongoing pandemic (Clockwise, from top: Rashford, ProtéJay, Quanna, and Zaia).
By Joshua Robinson Friday May 1, 2020 12:17 AM EDT

By squealing “CORONAVIRUS!” in an Instagram video on March 10, Cardi B became the unofficial celebrity spokesperson for informing everyone that shit had really hit the fan. In  addition to inspiring a viral — and Billboard-charting — remix of her original post, she ushered in an era of disbelief and uncertainty that deepened when the World Health Organization declared the global outbreak to be a pandemic one day later.

News of a novel virus overseas was quickly eclipsed by stateside fear as cases started being reported in several states. Atlanta, while not hit as hard as other major cities across the country, was hit nonetheless, and life has since changed dramatically for healthcare professionals, bartenders, and everyone in between as nonessential businesses close and essential businesses intensify.

The music industry is no exception, leaving local artists in an unexpected position. Not being able to earn money from performing at venues and possibly having to refrain from recording music are both legitimate concerns, yet instead of conceding defeat to COVID-19, Atlanta’s hip-hop community is fighting back with creativity. Here’s a snapshot of four artists who, despite social distancing, are still connecting and interacting with their listeners.

Savannah native Quanna (pictured, bottom right) regularly shuffles between Atlanta and Brooklyn, but due to the outbreak in New York, she has been quarantined in the latter since March. While there, her hustle has gone completely digital, and over the past month, Quanna has reinvigorated the promotion of her 2019 project Miss Thang and lobbied, albeit unsuccessfully, for entry to Tory Lanez’s “Quarantine Radio.” Her longest-running effort, however, was the “Like Me (Remix)” Challenge, in which she tasked hungry producers to recreate and modernize the beat to one of her fan-favorites.

“Every time I perform, I do “Like Me,” my first song ever, and people love it,” Quanna says. “I think it’s dated, though, so I decided to do a beat challenge to give it a refresher of sorts.”

Unlike the TikTok and freestyle challenges flooding social media, Quanna’s challenge has put the spotlight on young producers and given her listeners the opportunity to be a part of her upcoming project, which will feature the top-voted remix to “Like Me.” Work on the project was unfortunately halted due to New York’s shelter-in-place order, but for the time being Quanna is dedicated to fostering a connection with listeners through social media.

The son of New York legend Half-A-Mill and a decorated multihyphenate with music- and television-related accomplishments under his belt, ProtéJay (pictured, right) is a man of routine, and one of his major challenges with adapting to life during COVID-19 is the disruption to his nonstop work ethic. He admits to struggling with a forced change of pace, as well as having to reconsider major plans for 2020, but he isn’t letting this slump stop his drive.

“Our plan coming into this year was to drop four projects — one for each quarter,” ProtéJay says, “so we can’t back out on that. We’ve gotta do what we said we were gonna do.”

Sure enough, he dropped the eight-track project, Your World, on March 27, and the week after he started a live streamed concert series with local producer 88Jay, called Sound Disorder. Powered by We Get It Media Productions, their weekly acoustic set now airs every Thursday evening at 6 p.m. on his Instagram account. With newfound structure and an additional creative outlet at his disposal, ProtéJay is re-energized and motivated to lift the spirits of everyone who tunes in.

“With all this shit going on, those little glimpses give people a break from reality,” he says. “We’re just tryna have fun and get our minds off of the situation.”

Artists like Zaia (pictured, left) are pushing through the only way they know how — by releasing new music. Nearly a year removed from signing with Sony Records and releasing his stellar RESET EP, Zaia is done with waiting. On April 1, he unleashed “DEMONS,” the first single from his upcoming project. The bass-rattling earworm hijacks a simple refrain and infiltrates its surroundings with sharp lyricism and monstrous vocal effects to create a beast of a record. Complimenting the single is an equally villainous music video, directed by Patrick Tohill and The Misunderstoods.

Luckily, “DEMONS” is only the appetizer for what Zaia has in store for listeners. While COVID-19 hasn’t delayed the release of his anticipated follow-up to RESET, the project’s rollout has suffered from canceled photoshoots and other unfinished supplementary content. Zaia powers on nevertheless.

“I’m not waiting until corona ends to release music,” he says. “I’m not going to let monetary projections right now affect when the music can come out or when people can hear it. The people that need to hear my music are gonna hear my music at the right time.”

While many artists have found solace in innovative strategies and sheer grit, plenty are grappling with financial hardships and simply being unable to do what they love. In the wake of venue cancellations and shelter-in-place orders, Rashford (pictured, top) was one of those artists. As a rapper and the event planner behind Atlanta’s burgeoning We Gotta Make It concert series, he takes performing seriously, both as a passion and as a way for artists to eat.

“It’s definitely depressing, like, ‘Damn. What am I gonna do now?’” Rashford says. “That connection that happens at shows, you can’t really replace that. I depend on my craft for happiness.”

To rediscover that creative satisfaction and maintain a connection with his listeners, he recently announced a new web series titled “Just Because.” The show will feature a loose direction, solely centered around what his fanbase wants to watch him discuss, and it will also serve as a way for him to tease upcoming music, akin to how one would tease new music at a concert. Whether or not it works, Rashford realizes that taking risks, regardless of the looming pandemic, will always be a part of his craft.

“This pandemic is something we’re not sure of,” he says. “We’re not sure how life is gonna be in the summer or fall or even next year. Yeah, I can hold back on my music because we’re not sure, but I can also just go forward — because when have we ever been sure anyways?”

This too shall pass. —CL—