Not just sheltering in place during these uncertain times, the Athens-based musician releases his 12th solo album — and promotes it with a live concert 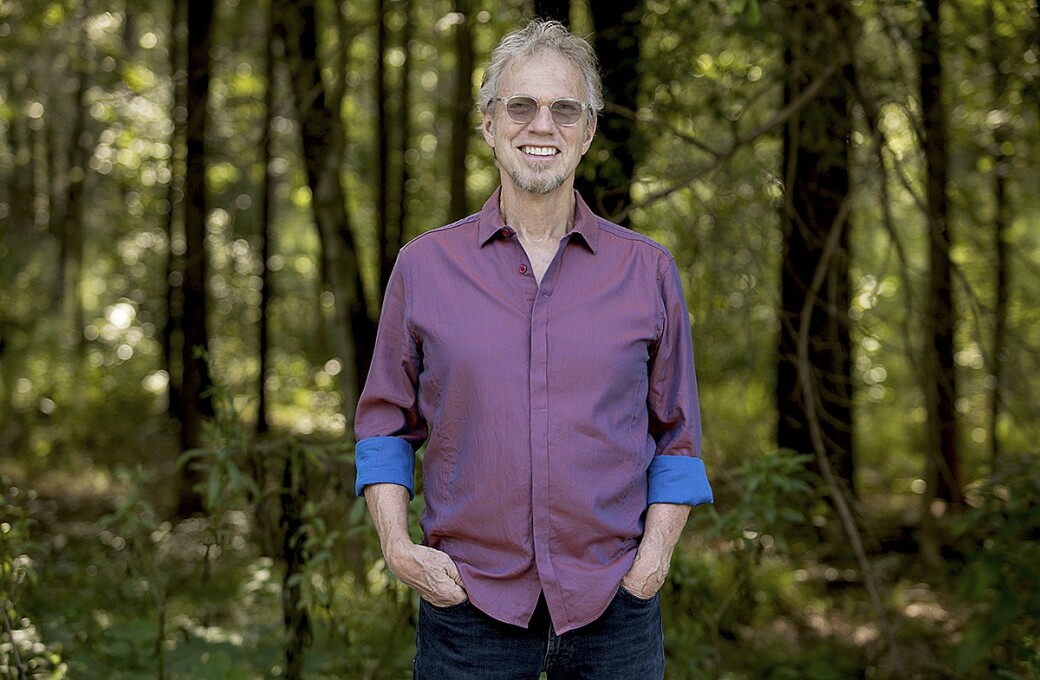 Last month we checked in with Jimmy Hall, a mainstay of Macon’s Capricorn Records stable of talented artists, who is still making music. This month we go back to that well to chat with another key player in the Capricorn scene, one who now resides a little closer to home in Athens, Georgia. The Jesup, Georgia-born Randall Bramblett has lived in the Peach State for most his life, save for a few years in New Orleans.

Bramblett’s resume should be the envy of most working musicians. Now in his early 70s, the multi-instrumentalist has been a professional musician since 1970, adding sax/woodwinds, keyboards, and guitar to acts as obscure as Beaverteeth and as high-profile as Gregg Allman’s solo projects. He even contributed to Two the Hard Way, Gregg’s notorious collaboration with Cher, attributed to Allman and Woman. Bramblett has also brought his talents to a wide range of albums by artists like Bonnie Bramlett, Hydra, Levon Helm, the Atlanta Rhythm Section, Elvin Bishop, Cowboy, Martin Mull, Shawn Mullins, Widespread Panic, Gov’t Mule, and others. Bramblett was an official member of Chuck Leavell’s Allman Brothers Band jazz-fusion offshoot Sea Level, released some early solo records, and was a key player in Steve Winwood’s touring band for over 15 years.

After cleaning up from substance abuse issues in the late ’80s, Bramblett decided to continue the solo career he started back in 1975, but took a sabbatical from, in order to work with the artists listed above. Since then he has released nine albums, all on the well-respected New West label. The latest, Pine Needle Fire, his 12th, streets this month. It continues Bramblett’s vein of rather dreamy, elusive, Southern-tinged roots pop and follows 2017’s somewhat prophetically titled Juke Joint at the Edge of the World, as it feels that is where we are living in today’s climate.

Not unlike other touring musicians, Bramblett’s life has been upended by the pandemic. “We did the tracks (for the new album) a year ago in October over at Martin’s Garden at Coleman Farms Studio in Roswell,” he says. “We cut everything in about five days and were taking our time to do overdubs — and then the pandemic hit.” After waiting a few months and then realizing the coronavirus pandemic wasn’t going away, he and his established band finished the album, albeit not in the same room. “We figured out we could do it one person at a time, keep people separated. It’s not the same as recording everyone together, but it worked.”

One of the disc’s focus tracks is “I’ve Got Faith in You.” The emotional ballad features old Capricorn buddy and Cowboy co-founder Tommy Talton playing slide on Duane Allman’s 1961/62 Gibson SG, the same one used for the legendary Allman Brothers Band At Fillmore East live recordings. “It was a nice, completed circle to bring in the sound of that guitar and its history with Duane. The Allman Brothers were a big influence on all of us growing up. It fit the song, and it was great to get Tommy on the record.”

In general the album’s lyrics, written and mostly recorded before COVID-19 took hold, are more pensive, wrapped around aging. “Maybe it’s a little darker sounding,” Bramblett admits. “It’s a time of reflection in my life, a realization there’s not an infinite amount of time left here. Songs like ‘Another Shining Morning,’ ‘Manningtown,’ and the title track … just thinking back on childhood … reflecting and thinking about your whole life … that everything is moving on.” The process of composing songs for Pine Needle Fire was similar to how Bramblett has worked in the past. “The writing of the songs is similar. I just collect as many as I can between the records and see if there are some themes and sounds that work together, and if I have enough to do a record. I don’t write from a concept. I write when I can, and what comes out is what I’ve got.”

There is also a slight psychedelic texture to some of the tracks. That was no accident. “I’m a fan of that sound. It gives a broader, more expansive feel, rather than the songs being so straight. I like the melody of Beatles stuff … just to open things up and make it more atmospheric. The lyrics are like that too.”

The Roswell studio where he and his longtime backing players along with producer Gerry Hanson recorded was also a key ingredient. “We chose the (Martin’s Garden) studio because it was on a little farm, about a mile from downtown Roswell. It felt relaxed. We rented a house nearby for the band. It’s good to get away and focus just on the music. We cut everything in a week.”

Ultimately, even with the delay caused by factors beyond his control, Bramblett feels “it worked out fine. I like the idea of releasing a record in November, I’ve never done that before.” Next he’s filming a video of the entire album, with the band. That will have to suffice since once it gets cold, there won’t be any more of the socially distanced, outdoor shows like he has occasionally played in this COVID culture.

With Pine Needle Fire, Randall Bramblett has crafted one of his finest and most provocative collections to date. Like most of his work, the approach is introspective, thoughtful, and timeless. It’s another quality entry in an impressive catalog, created by an artist with talent, credibility, and a subtle yet supple enduring musical approach that continues to flourish even, perhaps especially, in this demanding atmosphere. —CL—

The Randall Bramblett Band will perform Sunday, Nov. 8 (note this is the new date for a previously-scheduled concert) at the From The Earth Brewing Company as part of its “Drive-In Concert Series,” an outdoor, physically distant but social event. Physical distancing will be enforced, masks are required.

How it will work: Parking lot spaces will be used as box seats. Each parking space (or “box”) will be assigned to a ticket holder for a maximum of 4 guests per party. Patrons will park and then visit the ticket booth to be assigned their box in their respective ticket section. Guests are welcome to bring lawn chairs or picnic blankets within their seating area. Physical distancing will be enforced with 6 feet between other parties of concert-goers at all times. Face coverings will be required when entering the venue, walking around the venue, and when at the bar.

From The Earth Brewing Company will provide food and beverage for purchase throughout the concert. They ask that no outside food, beverages, or EZ-ups be brought to the event.

Please send upcoming blues events to be considered for Blues & Beyond and its upcoming concert calendar to hal.horowitz at creativeloafing.com. 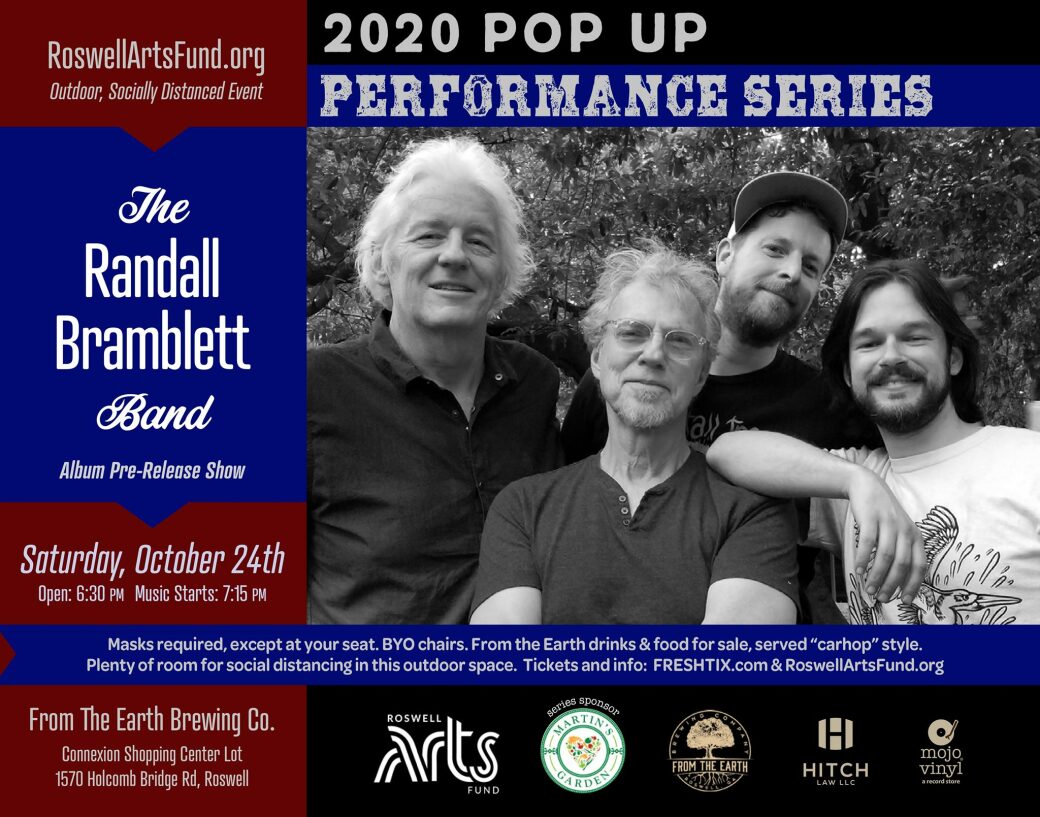 10/24/2020 7:00 PM
From the Earth Brewing Company
Physically Distant But Social Pop Up Concert: The Randall Bramblett Band (Album Pre-Release Show) RAF is proud to present esteemed singer-songwriter Randall Bramblett, a multi-instrumentalist musician with a career spanning four decades, and The Randall Bramblett Band. Highly sought-after for his creativity as both a collaborator and skilled touring sideman, the legendary Georgian’s talent has earned him the respect of his peers and many of rock’s finest luminaries. The first single from Randall's forthcoming album Pine Needle Fire, I've Got Faith in You, was released on September 14. Pine Needle Fire - Out November 13 on New West Records Sponsors for the 2020 Pop-Up Performance Series include our Series Presenting Sponsor Martin’s Garden at Coleman Farm, joined by From the Earth Brewing Company, Mojo Vinyl Records, and Hitch Law, LLC. roswellartsfund.org/PopUp/
—Read Article
dummy