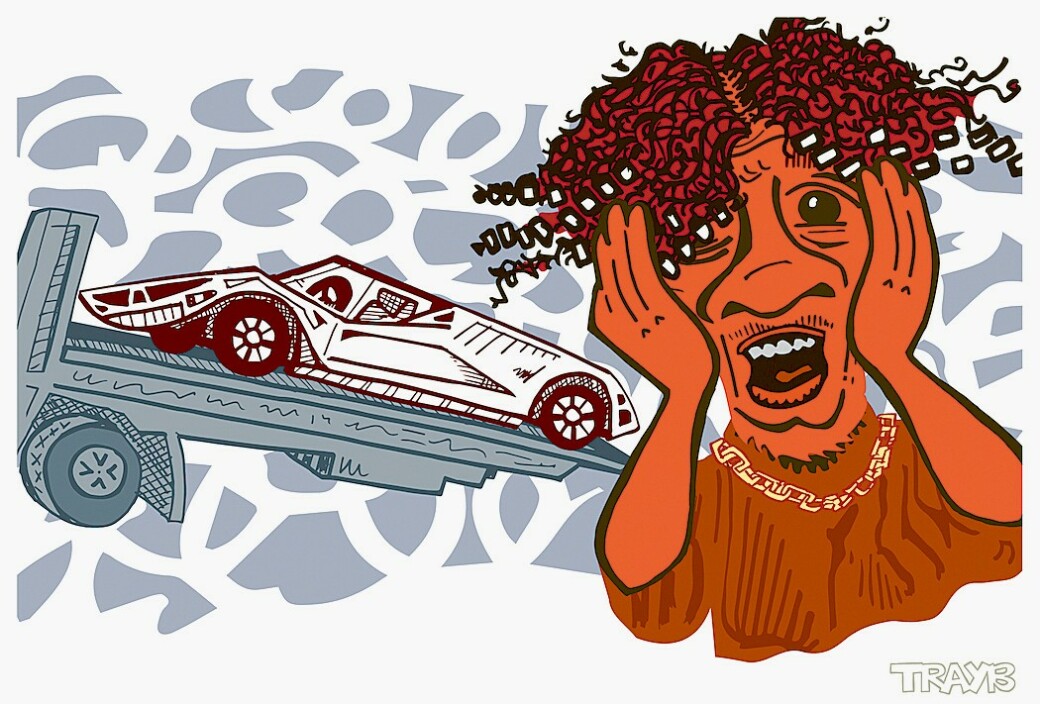 An Atlanta rapper was driving his white Ferrari more than 150+ mph on the I-75/85 Downtown Connecter near University Avenue. An officer started following the rapper’s Ferrari after spotting it speeding and weaving in and out of traffic on the interstate.

Police pulled over the 23-year-old rapper and arrested him on charges of reckless driving and speeding, according to WSB-TV. The rapper went to Atlanta City Jail … and his Ferrari was handed over to a friend. The white Ferrari was about a month old — a gift to the rapper on his 23rd birthday in August from music mogul Quality Control CEO Pierre “Pee” Thomas, according to AJC.com.

Oddly, the rapper’s arrest happened almost exactly two months after the rapper crashed his red Ferrari in the same spot: on the Downtown Connector near University Avenue. The rapper was driving his 2020 red Ferrari 448 on I-75/85 going north when he lost control on the wet road, hit the median concrete wall, “then spun across seven lanes of traffic before hitting the right concrete wall,” the AJC writes. His car  came to a stop in the emergency lane and the seventh lane — causing major delays on I-75/85 during rush hour.

The rapper said he didn’t remember anything after losing control of his Ferrari (worth at least $330,000). Witnesses told WSB-TV that the rapper was driving at a “high rate of speed.” The rapper was not seriously hurt in the crash — but the red Ferrari was totaled.

The rapper addressed his recent speeding sprees on TikTok: “Well, we’ve come to this. Yeah. It happened… Slow down, kids.”

REPTILE DYSFUNCTION: A four-foot snake ate a large lunch and wriggled his way on over to a gas station in Cherokee County. The snake slithered up to Pump 8 — and that’s when a customer called 911, according to the Atlanta Journal-Constitution.

“But before Animal Control could dispatch a snake wrangler,” a Cherokee County law enforcement officer named Captain Jay Baker took action and “grabbed the wayward reptile and put it in an empty pillowcase he carries in his patrol car.”

“It was obvious that the snake had just eaten something rather large,” Captain Baker told AJC.com. He took the snake to some woods about a mile away and set it free. The snake quickly regurgitated his lunch — apparently a rat — and slithered away.

Captain Baker has a lifelong fondness for catching snakes — it’s the reason he keeps that special pillowcase for snake-wrangling in his patrol car. That snake was the 23rd of the year that Baker has captured and relocated. “If there’s a snake call, I’m gonna go to it if I’m close.”

Captain Baker’s snake obsession started when he was a child. He told the Cherokee Tribune Ledger in 2016: “To this day, if I see a snake anywhere, I have an uncontrollable urge to catch it.” Thus, some in the community call him “The Snake Whisperer.”

ACCELERATE YOUR LIFE: Another Atlanta rapper was arrested around 3 a.m. for driving 143+ mph on I-85 in DeKalb County, according to a police report.

An officer pulled over the 22-year-old rapper on Clairmont Road and asked him why he was driving his white BMW SUV so fast.

The rapper said he was coming from Gwinnett County and “people were following him, and that he left from the club,” the officer wrote in the report obtained by WSB-TV.

Eventually, the rapper said he was speeding because he gets followed wherever he goes.

“He stated, ‘If there is like 10 cars following me, I can do 143 because I am not a regular person, and you could go and look on your computer, and it would tell you that,” the officer wrote.

The rapper said he was returning from a Gwinnett club visit to promote his new song.

The Atlanta rapper was arrested for reckless driving, speeding, failure to maintain lane, and improper stopping, according to WSB-TV.

SIZE MATTERS: A witty woman wrote this on Facebook to alert her neighbors in Decatur’s Oakhurst neighborhood.

“Several weeks ago, I posted about a person who keeps putting Trump stickers on the communal trash can outside my house. We had three go-arounds in which I removed the stickers, crumbled them, and threw them away — only to see them back on the trash can several days later. And then suddenly it stopped.

“Well, this person is back. But like the Trump campaign itself, his absurdly tiny hands, his inability to form full sentences, and finally his dwindling ‘career’ in public office, so too have the stickers decreased pathetically in size.

“In fact, they’re so small (think the size of a stamp) that I found myself  ‘Oh bless their heart’-ing as I carefully picked each one off, squeezed the tiny sad baby sticker between my normal-sized hands, and threw it again in the trash can.”

ASSHOLE OF THE MONTH: A 41-year-old Duluth man will spend a year and a day in prison after trying to sabotage PPE shipments of a company that fired him, disrupting shipments at the height of the COVID-19 pandemic.

According to the U.S. Attorney’s Office of North Georgia, the 41-year-old man caused more than $200,000 in damages. Three days after getting his last paycheck, the man “used a fake user account that he had previously created while still employed at the company to log into the company’s computer systems.”

“The edits and deletions to the company’s records disrupted the company’s shipping processes, causing delays in the delivery of much-needed PPEs to healthcare providers,” the U.S. Attorney’s Office said.

WIGGED OUT: Just when you think 2020 can’t get any weirder…. CBS46.com reports that poisonous “puss” caterpillars are on the move in Georgia.

Puss caterpillars are hairy and dangerous. A UGA professor of entomology explains: “Puss caterpillars are named after pussy cats because they’re so fuzzy, they look adorable, you want to pet them — but don’t you dare, because hiding under that fuzz is hollow hair” containing venom strong enough to send its victim to the ER.

What happens if you come into contact with one of these puss caterpillars? Some people report feeling as if their limbs are on fire, notes CBS46.com, adding: “Right now the hairy wrigglers are on the move, as they’ve fattened up over summer and are getting ready to turn into moths.”

Another expert tells Forsyth County News, “If you are doing any kind of gardening or picking fruit, it is something to be aware of. They look like a little wig walking.”

Apparently, the excruciating pain from a puss caterpillar sting lasts for about 12 hours.