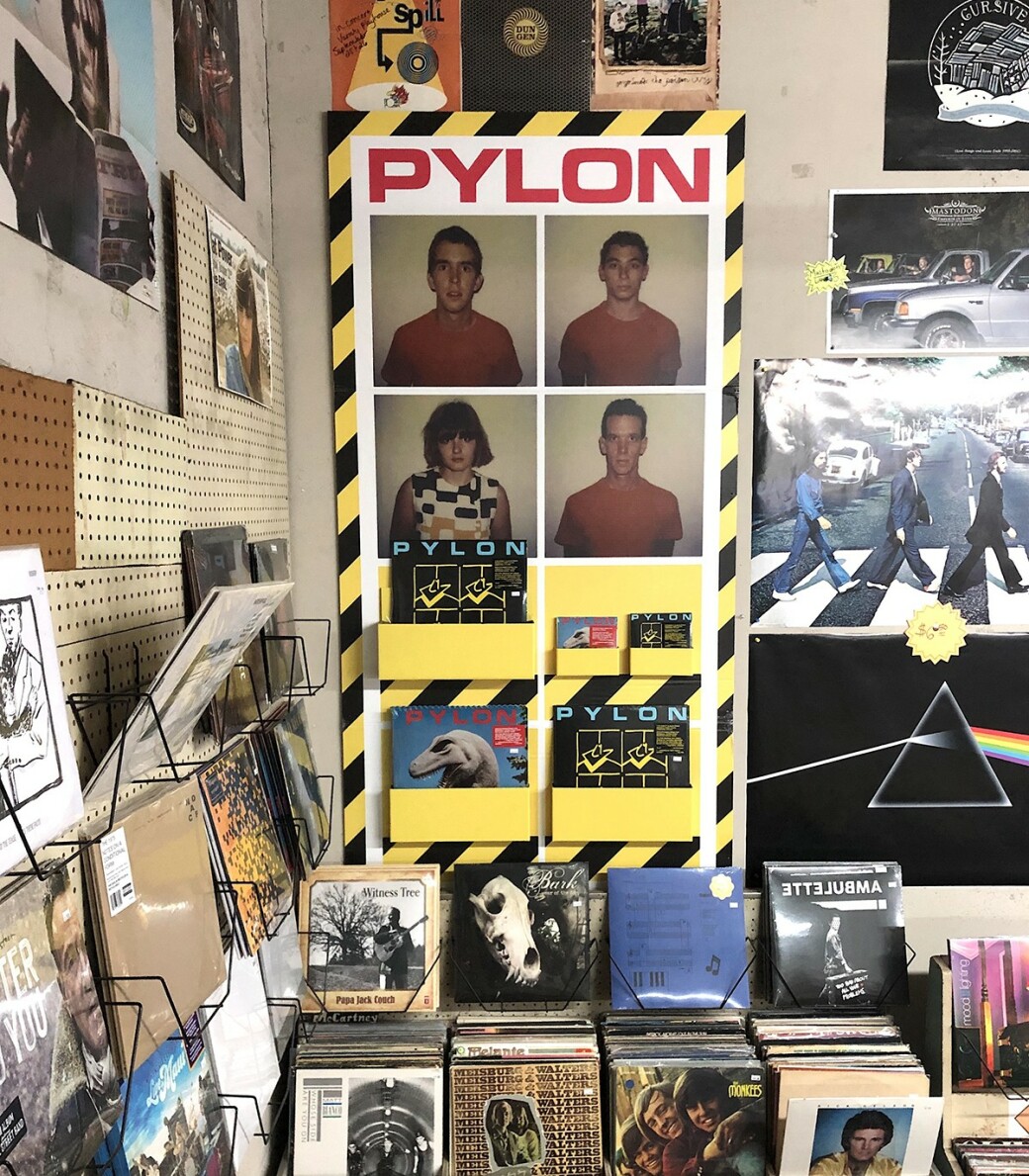 In light of the approximately one gazillion already published reviews of Pylon Box, your correspondent is taking a slightly different approach in discussing the monumental New West Records project. I hereby submit my name for inclusion on the list of scribes who think Pylon Box represents an essential link in the cultural continuum encompassing all that is cool, hip, righteous, and weirdly beautiful about making rock music in America. Period.

That said, perhaps some readers do not already know that Pylon Box includes remastered vinyl editions of the band’s two studio albums originally released on Atlanta’s DB Recs, Gyrate and Chomp; Extra, an 11-song collection of previously unreleased studio and live recordings including one made before Vanessa Briscoe Hay joined the band; and Razz Tape, a collection of 13 unreleased songs from a session pre-dating the band’s seminal “Cool” b/w “Dub” 7-inch debut. Also in the Box is a large, hardbound, 200-page book, each one signed by Hay, Michael Lachowski, and Curtis Crowe, featuring ruminations and remembrances from members of R.E.M., Gang of Four, Steve Albini, Sonic Youth, The B-52s, Bradford Cox of Deerhunter, Mission of Burma, Anthony DeCurtis, Chris Stamey, and Steve Wynn, among others.

An essay in the book chronicling the history of Pylon by music journalist Stephen Deusner draws on interviews with the surviving band members (in 2009, 53-year-old Pylon guitarist Randy Bewley died of a heart attack), as well as input from members of the aforementioned R.E.M., The B-52s, Gang of Four, and Method Actors, along with other witnesses, cohorts, and conspirators. Complementing the text is a fascinating compendium of photographs, drawings, posters, and images of artifacts from the band’s personal archives, much of which are now housed at the Special Collections Library at the University of Georgia and Georgia Museum of Art, UGA.

“In the late 1970s, you could throw a sweaty, loud, crowded, wild, floor-shaking, architecture rumbling party in the middle of downtown Athens, and there wouldn’t be anyone around to call the cops,” writes Deusner in the opening paragraph of the book chapter titled, “Hello How Are You?”

Your correspondent can attest to the accuracy of the author’s observation. In 1978, I was in my junior year as an art history major at the University of Georgia, living — with a few friends who first met in Myers Hall, one of the campus dormitories — in a house which we had refurbished, on Prince Avenue. The house was renowned in a minor way for having a garishly painted, life-sized fiberglass statue of “Old King Cole” sitting on his throne, on the front porch — originally part of a Mardi Gras float found in an alley in New Orleans. A rectangular hole was cut in the top of Old King Cole’s protruding stomach into which was inserted a metal container about the size of a large cereal box with the top missing. For the rest of the time I lived in the house, the merry old soul who called for his pipe, his bowl, and his fiddlers three regally served as our mailbox.

Walking home from school one day, as I passed a house around the corner from ours, I heard someone playing bass guitar, rather poorly, I thought, but with what came across as stoic determination. As the weeks went by, the artist progressed, steadily developing his (or her) chops by sticking with a limited repertoire of simple licks and phrases, which sounded pleasing to my ears. After a while, the anonymous serenading ceased. Must have moved, achieved what they wanted, or given up, I reckoned.

After graduating in 1979, I moved back to Atlanta and started writing about the music, film, and arts scene for a variety of publications including Creative Loafing. A few years later, I ran into Michael Lachowski, who I had known since our student days at St. Pius X High School. At UGA, we occasionally ran into each other on campus and, of course, I was familiar with Pylon, who I had seen performing a number of times in Athens and at 688 in Atlanta. In discussing the whole “where did you live when you were in Athens” thing, I told Michael about living in the Old King Cole house. We then deduced that the musician I had heard on my strolls home from the Lamar Dodd School of Art was almost certainly Lachowski, Pylon’s soon-to-be bassist.

Many people who lived in Athens in the late 1970s have a story like mine to tell. We didn’t all know each other personally, but we lived in the same village. We felt an indistinct but no less palpable kinship and shared a common cause, however elusively explicable that cause might have been. And, for the most part, there was nobody around to call the cops. No band expressed that ineffable urgency, that sense of propulsive destiny, that run-what-ya-brung, hellzapoppin’ attitude with more furiously creative energy and purity of essence than Pylon.

Trust me. It’s all in the box.

Anagrams/Jeff Crompton: “Roll Call” b/w “Springs” (self-released seven-inch) — At the end of October, on a pleasantly warm, overcast Saturday afternoon, Anagrams, a newly formed duo comprising Jeff Crompton (saxophones and clarinet) and JD Walsh (guitar and electronics), marked the release of their seven-inch debut, “Roll Call”/”Springs,” with an open-air performance in the parking lot at 378, the art gallery on Clifton Road in Candler Park. Under imminent threat of rain, Anagrams managed to wring out a short, sweet set before the showers came, scattering the grateful audience back into COVID exile.

The recorded version of “Roll Call” rolls out with a deep dub bass line and a hint of trap (ATL, yo!) in service of a finely contoured, multihorn-driven theme, aspects of which sound distinctly Zappa-esque. Crompton’s sax solo slews between honking, pyrotechnic flurry and edgy cocktail blues before Walsh enters the fray with a few bars of funky butt synth followed by a conjunctive outro-reprise of the main theme. It’s a lot of alt-jazzy fun packed into four minutes and 15 seconds.

In complementary opposition, “Springs” captures Anagrams skipping with almost unbearable lightness of being through a sunlit field of blooming lavender as interpreted on clarinet, acoustic guitar, and accordion-sounding keyboard — and I mean that in a good, folky jazz way. The world needs more lightness of being and blooming lavender and less of almost everything else.

Much promise lies in Anagrams, a serendipitous neighborhood pairing, which, like curbside store pickup and backyard hair salons, owes its existence in large part to the Current Unpleasantness.

Various Artists: A Circle of Atoms: The Pasaquan Sessions 2020 (Institute 193) — Slated for release on February 18, 2021, A Circle of Atoms: the Pasaquan Sessions 2020 is a limited-edition vinyl album featuring artists who were scheduled to play this past July at Pasafest, an annual outdoor concert at Pasaquan, the phantasmagorical compound in Buena Vista, Georgia, created by the late Eddie Owens Martin, also known as St. EOM. The album is a joint venture between Columbus State University and the Pasaquan Preservation Society in collaboration with Institute 193 in Lexington, Kentucky.

For the last few weeks, the video performances at Pasaquan have been released for public viewing on Facebook and the Institute 193 Vimeo page. The first three videos feature Lonnie Holley performing “Earth, We Have a Problem”; a mesmerizing ambient set by Duet for Theremin & Lap Steel; and Jim White playing one of his signature songs, “Plywood Superman.” The plan is to release one video every Thursday until the official album hits the street on February 18.

Sun Ra Arkestra: Swirling (Strut Records) — Sun Ra may have exited the earthly plane in 1993, but his cosmic philosophy and otherworldly genius as a composer/arranger continue to inspire some of the greatest jazz being performed in the 21st century, particularly in the form of the Sun Ra Arkestra under the direction of Marshall Allen. Swirling, the Arkestra’s first full-length studio album in 20 years (two live recordings have been released in the interim), finds Allen, at 96 years of age, in full command of the visionary cooperative he joined some 62 years ago when the band was based in Chicago.

Still a formidable multi-instrumentalist (reeds, horns, flute), Allen composed the album’s exuberant title track, while most of the other selections are his new arrangements of Sun Ra material. Many of the songs, such as “Satellites are Spinning,” “Angels and Demons at Play,” “Astro Black,” and “Rocket No. 9,” will be familiar to longtime fans. Recorded over the last few years at Rittenhouse Soundworks in Philadelphia, the Arkestra configuration heard on Swirling includes veterans such as Michael Ray (trumpet), Danny Ray Thompson (baritone sax, flute), Vincent Chancey (French horn), and Elson Nascimento (drums, percussion), along with relative newcomers including Dave Hotep (guitar) and Farid Barron (piano). Sadly, Thompson, who served for decades as the Arkestra’s manager, died this past March 12, while conga master Stanley “Atakatune” Morgan passed away in 2018.

Most especially welcome is the presence of Tara Middleton (Hotep’s wife) who has been singing with the Arkestra band since 2012. With the passing in 1992 of songstress and high priestess of Afrofuturism June Tyson, the Arkestra suffered a seemingly irreparable, if nonfatal, artillery strike. Middleton, who also plays violin, restores the magic elixir that made Tyson an integral element of Sun Ra’s cosmo-infinity soundscape. As well as uncannily conjuring her predecessor on “Satellites Are Spinning,” Middleton distinctively applies her robust, richly textured, Sarah Vaughn-ish instrument to “Astro Black” in an essentially a cappella performance accompanied only by slewing electronics, as well as on the slamming extended blues jam, “Space Loneliness.”

In keeping with the Sun Ra tradition, Swirling showcases a range of idiomatic styles from free jazz sojourns and deeply swinging big band riffs to funky-as-you-wannabe rhythm and blues romps and even aberrant novelty fare, such as “Unmask the Batman.” Regarding the latter, the success of Marshall’s take on the ’60s-era TV superhero theme song, originally composed by Neal Hefti, is perhaps best left to the individual listener’s discretion.

Swirling showcases the modern-day Arkestra in a resplendent state of tune, but also serves to highlight the ensemble’s nature as an evolving organism. Marshall Allen’s Arkestra is not a clone of his late mentor’s band. His own reading of the master plan, which one day will be passed along to another adventurous crew, tends to favor the horn section, as opposed to Ra’s natural proclivity toward the keyboard and its harmonic excitations. Regardless, let us give thanks for the opportunity to travel the spaceways from planet to planet with The Sun Ra Arkestra under the masterful guidance of its nearly century-old commander. —CL—