What a large Black man taught me 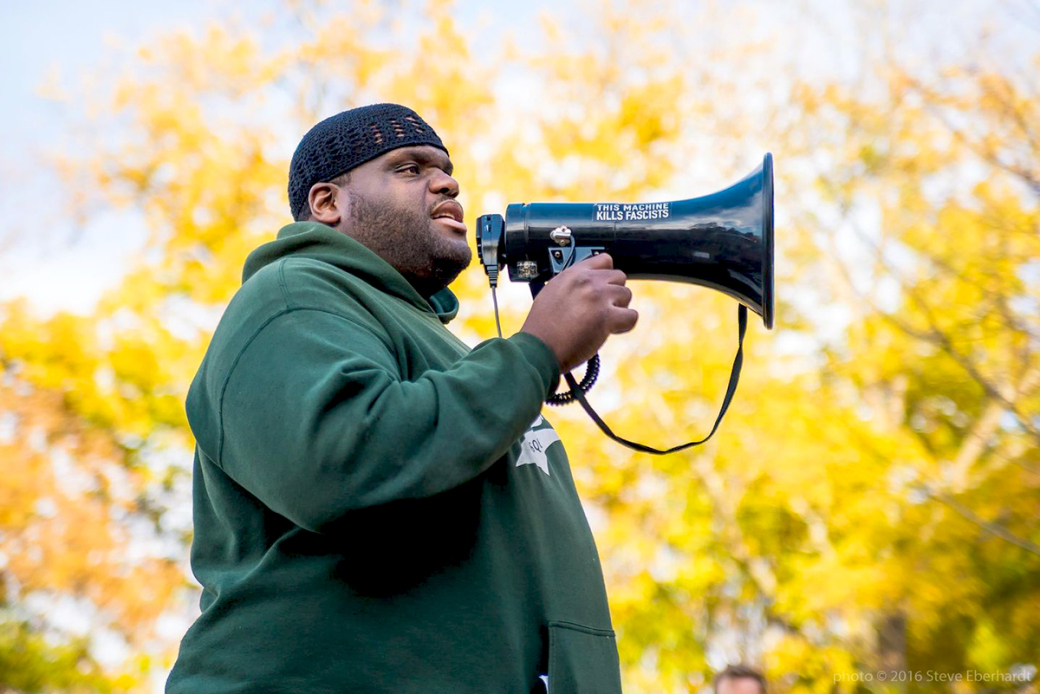 “We are the Streetgroomers
We stand for what is right
We fight against what is wrong.
We fight for the people that have been forgotten.”
— StreetGroomers motto

A StreetGroomers post came across my Facebook feed with a call for supplies for the homeless: socks, packaged foods, gloves, hats, toiletries. I had just started the March Onward DeKalb Resistance FB page and thought this would make a great project for our group. We gathered at Napoleon’s and put together our packages and commiserated on the state of our nation under Trump. We had been marching, post-carding, registering voters, and resisting since the 2016 election.

I contacted Haroun Wakil, the founder of the StreetGroomers, to coordinate dropping off our packages. My daughter, Ella, and husband, Don, and I drove to Southwest Atlanta to meet him. I had never been to the SW neighborhoods of Atlanta. Honestly, I was stunned at what we saw: Right next to Haroun’s house was a large 1,000-apartment complex abandoned, open, burned out. Remnants of two more open complexes were down the street, doors and windows boarded, trash everywhere, evicted household belongings strewn in the yards — and all this within a bird’s eye view of Mercedes-Benz Stadium.

I came home changed. I knew that the Southside BeltLine Trail was heading that way, and I immediately thought those neighborhoods would be steamrolled by developers and that it was probably too late to make a difference. I served as the Zoning Board of Appeals District 2 Representative for DeKalb County for seven years and had seen what developers, city, and county officials could do to neighborhoods. I asked Haroun about the apartment complex and what he knew about it. He said he knew it was full of crackheads and prostitutes, and that he had confronted the white guy that came when they built a 10-foot-high chain link fence around it.

Haroun and I started texting. Everyone who knew him will remember his kind, soft voice for a man so large. He was 6’10” tall and “linebacker” big. He would text me GM (good morning) and WYD (what you doing) and that would start our dialogue about what projects we were working on at the time. He was concerned about the gentrification in the neighborhood, so we began to meet and talk about developers and what things he could do. He was very willing. I told him that “if you’re not at the table, then you’re on the menu.” We began calling developers and making demands for the community like allocation of low-income housing with every new project. We discussed rent-control measures, restitution for school impact, job development, skills training, and how developers could truly serve and protect the community.

Haroun was at the Proctor Creek project and happened to meet the developer, former Atlanta Braves and New York Yankees baseball player, Mark Teixeira. Haroun in his kind way asked for a picture, and Mark obliged. Once the photo was taken, Haroun started peppering Mark with questions about the Proctor Creek development. After a few minutes Mark turned and ran away. Literally, ran away. A few minutes later Haroun’s phone rang, it was a police captain he knew, asking, “Haroun, what did you do to Mark Teixeira?” “I was just messing with him,” Haroun said. “Well, don’t do that!” the captain said.

Haroun was a master at social media. Mark Teixeira running away was all over his feed. “Don’t trust Mark Teixeira, He’ll steal your home like he did the bases.” Hilarious!

As Haroun became my friend, he changed me. He made me recognize my privilege, my white privilege (WP). I began to see my white world, my white upbringing, my white schooling, my white friends. I needed to stretch myself, my understanding, my point of view, and to confront my own prejudices and biases (PB). I needed educating. We began to meet more often, and I asked him questions that I would never have asked someone of color. He tolerated my stupid questions well. He would speak in a dialogue that I often didn’t understand, and I would say, “my white lady ears don’t understand.” He would then switch to a white man voice, saying, “Melissa, what I was saying, is those developers are crazy.” Ah yes, they are.

I asked if he could arrange for my resister sisters to register to vote high school seniors in the neighborhood. He arranged for us to do so at Booker T. Washington High School. I wondered what the all-Black school would be like. I was worried (PB). It was beautiful, full of engaging and wonderful young Black students and committed faculty. All the students knew Haroun. He asked if he could have a pic with all my white sisters because he needed it. When I asked him what he meant, he said that his legislative representative was not returning his phone calls. We took the photo, and he texted it to his rep with the message, “Haroun bringing the white ladies from Buckhead to BTW HS. You better call me back.” Within a few minutes his rep called him (WP). I reminded him I live in Decatur, and he said with a grin, “Yeah, I know.” I told him he could use my whiteness anytime he wanted.

When I visited, we ate lunch at the Chick-fil-A at West End. Everyone knew him. Everyone greeted him. His phone rang constantly, he received texts constantly. The place was always packed … and two off-duty cops were always there. My Chick-fil-A doesn’t have cops. (WP)

We collected school supplies for the children in his community. We got my neighborhood retail shops involved, and we ended up collecting over 300 backpacks, full of supplies. During school time, he would meet the children at the bus stops to make sure they were safe while waiting for the bus. Kids in my neighborhood are safe (WP). Haroun sponsored after-school and summer programs for the kids and even collected enough money to field a Little League baseball team. His heart was bigger than that of anyone I have ever met. I loved supporting him, because I knew every dollar I gave him went directly to help someone.

I would go to Goodwill and buy coats, especially the ones half-price. I could pick up a coat for $3.50! I would deliver them to Haroun, and he’d send me pics later that night of homeless men, women, and children wearing those coats. Why do we have homeless in Atlanta when we have abandoned apartment complexes? He was a regular at City Hall and spoke to elected officials about the problems of the community. His voice was strong and passionate, but soft and kind. People listened to him, he was a true voice of the people. He spoke for the “forgotten ones.”

Haroun only asked me for personal things once. He needed some new shoes. I said, “Easy, I’ll just order you a few pair. What size do you wear?” Size 21. “Your feet are almost two feet long? Seriously?” I began to search for size 21 sneakers and the largest I could find were 18s. No wonder he walked on the backs of his sneakers. I was determined to find him some shoes that fit. I called Friedman’s, and they said they thought they had one or two pair. We were walking down the street to Friedman’s and we passed a young teenager on the corner, wearing flip flops and a t-shirt. It was freezing outside. He was in need of a fix. Haroun asked him, “Are you 'bout done?” The young man said, “You got any money?” Haroun gave him his card and said, “When you ‘bout done, you can call me and I’ll help you. But don’t call me if you ain’t done.” Tough love.

We walked into Friedman’s and asked for the size 21 shoes, and we had to climb to the fourth floor. The salesman said, “These were ordered by Shaq but he didn’t like them.” It was a white pair of sneakers and pair of Timberlands. I bought both pair for Haroun, and, in his kind voice, he said “Thank you.” I wrote Shaq several times to see if I could get some more of his unwanted shoes, but he never responded.

Haroun’s health was not the greatest, he suffered from seizures that often landed him in the hospital. When he was in Grady I called to go visit him. When I asked if I could bring him lunch, he said, “Busy Bee?” “Heck yeah!” I picked up fried chicken, greens, and black-eyed peas, and we ate lunch in his room. I had recently joined the Atlanta Revival Resistance Chorus, and we had just had sung at a protest that he missed. He asked me to sing him a song. So, I did, right there in Grady. “Paul and Silas screamed and shout, doors flew opened and they both walked out, keep your eyes on the prize and hold on, hold on…” He was touched.

Haroun confronted all manner of social injustice including Nazis and white supremacy. He and others went to Newnan when the Nazis held a rally. (I can’t believe I’m even typing the word Nazis!) I was afraid to go (WP). So many people showed up, they had to build a small enclosure for the Nazis to do their thing. The photos he took were crazy, a small band of Nazis surrounded by protesters.

Last year, Haroun mediated the gangs in his neighborhood. He had been a gang member. It was a victory he was really proud of. I was proud of him. We don’t have gangs in my neighborhood (WP). 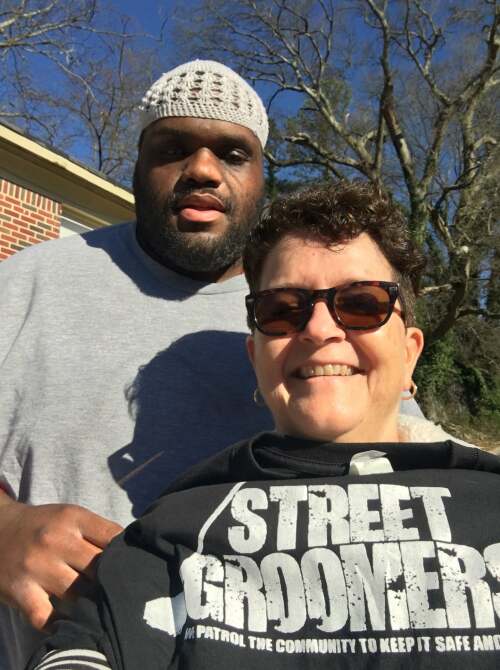 We marched in protests together (when I felt safe enough, WP). It was important, it meant solidarity, community, justice for all.

I will miss him, dearly. I will miss his “GM” and “WYD”. I will cherish the short time we had together. I will remember the lessons I learned about judgment, prejudice, inequality, justice. He taught me to listen and try to understand. He taught me to support and not lead. There were so many things he planned to do. His latest project was a dream of his. He had joined forces with a builder in the community to start an on-the-job construction training program for jobless men and women. He was amazing. The loss is big.

Why is he gone? My friend Haroun died Wednesday night after suffering a seizure while alone. I’m imagining him texting God (Allah) every morning, “GM … WYD” —CL—

A go-fund-me page has been set up to help defray the costs of Brother Haroun's burial and funeral expenses.