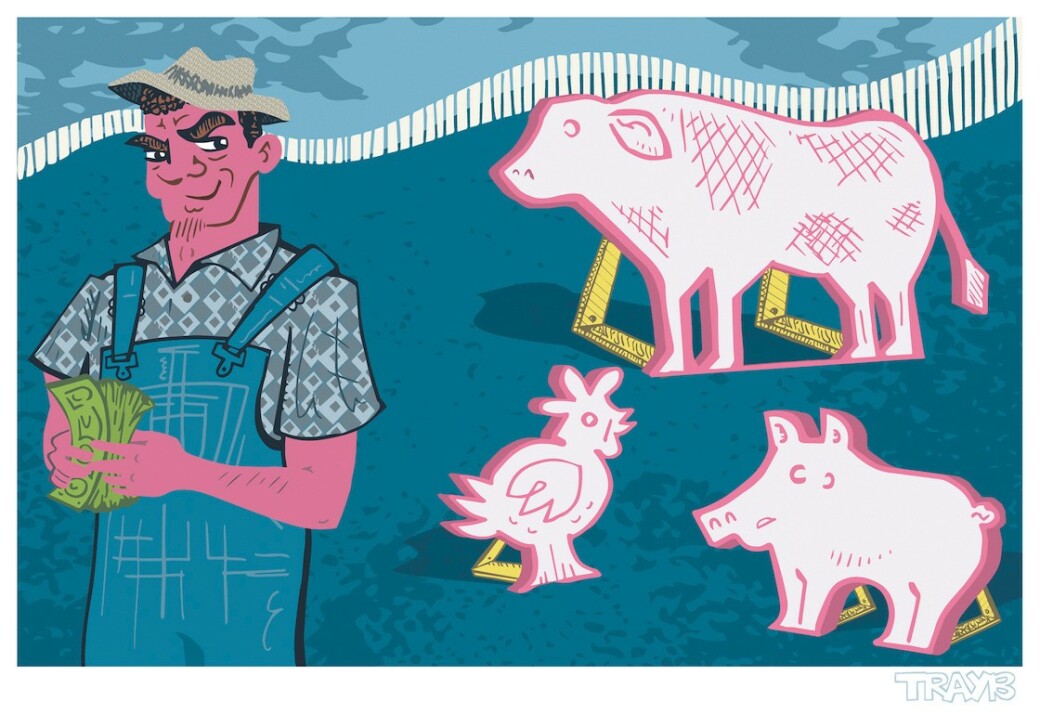 A 35-year-old Lithonia man is accused of claiming to own a farm — (which he doesn’t) — and that his imaginary farm was suffering due to the pandemic, in order to ask the government to bail out his imaginary farm — to the tune of $1.5 million dollars.

Even worse, he was allegedly trying to get that $$ from the USDA’s Coronavirus Food Assistance Program.

The program aims to help farmers and livestock producers dealing with price declines and other negative economic effects from pandemic. The Lithonia man allegedly submitted fraudulent documents claiming “loss of livestock,” according to a recent press release.

“Unfortunately, when criminals steal these funds, they take them out of the hands of those suffering hardship, such as farmers, who are the focus of USDA relief efforts,” said the acting U.S. attorney for Southern District of Georgia, reported in the AJC.

PENNY FOR YOUR THOUGHTS: A Georgia man quit his job at a luxury auto repair shop in Peachtree City. He demanded his final paycheck for months, but his former boss stalled.

The man said the coins were covered in an oily sticky substance he suspects might be power-steering fluid, according to Fortune magazine.

Also the man said he quit his job at the auto shop due to a toxic working environment. That stemmed from his boss, who also owns the repair shop.

A CBS46.com reporter went to the luxury auto mechanics shop to chat with the boss.

Reporter: “May I ask you about the pennies? Do you know anything about them?”

Boss: “I know tons about it, what’s wrong with it?”

Reporter: “So you did drop the pennies over at that person’s house?”

Boss: “I don’t know if I did that or not, I don’t really remember.”

Reporter: “You don’t know if you did it or not?”

Boss: “It doesn’t matter, he got paid. That’s all that matters. He’s a fucking weenie for even bringing it up.”

PHONY HIT PARADE: A 29-year-old man will spend seven years in federal prison for pretending to be part of a famous rap group — and stealing hospitality services. Also, the man must pay $300,000 to 19 businesses that he defrauded in the scheme.

The scam unraveled at an Augusta hotel, where 10 rooms had been booked.

His accomplice, a 52-year-old man, is awaiting sentencing.

“For several weeks, these men defrauded multiple businesses by posing as famous musical artists and their retinue,” said David Estes, acting U.S. attorney for the Southern District of Georgia in a news release. “Thanks to an alert hotel clerk, their phony hit parade came to an abrupt halt.”

The two men admitted to falsely portraying themselves as members of the Wu-Tang Clan and being affiliated with the Roc Nation production company starting in September 2019.

The men used fake and stolen credit cards to rent luxury limos and defraud hotels, caterers, and production studios of thousands of dollars in multiple Southeast cities, according to a news release cited in the Atlanta Journal-Constitution.

The scam imploded when employees at Augusta’s Fairfield Inn and Suites became suspicious and called the cops.

“This is what happens when you seek a fleeting moment of fame at the expense of others. Neither law enforcement nor the community will tolerate it,” Chris Hacker, special agent in charge of FBI Atlanta, told the AJC.

“The crew of the Rolls Royce-riding identity thieves who posed as rap industry figures scammed hundreds of thousands of dollars from some of the South’s most exclusive hotels, prosecutors told the AJC.”

The Georgian Terrace Hotel was left with a $45,000 unpaid tab. The Hyatt Regency Atlanta got stuck with a $39,000 tab. And the hip-hop poseurs were driving a Rolls Royce Phantom rented from A-National Limousine, which reported a loss of nearly $60,000.

LEAD FOOT: A sheriff in Cherokee County saw a man steering a moped with his feet — without wearing a helmet — while driving on I-575. Also, his moped had no tag. The sheriff tried to stop the Moped Man, who refused to pull over. Just north of Rabbit Hill Road, the driver exited the interstate, drove into the woods, and then ran away, the AJC reports. The sheriff chased the man on foot and captured him.

Authorities found a bag of suspected methamphetamine and drug paraphernalia under the moped’s seat. The Moped Man, a 23-year-old from Blairsville, Georgia, was charged with drug possession, steering with his feet, operating a motorcycle without a helmet, and driving without a tag, among other charges.

AS EASY AS ONE-TWO-THREE: Within 30 minutes, an unarmed, 26-year-old man attempted three crimes — two carjackings and one home invasion — and his intended victims thwarted him every time. Still, his unsuccessful crime spree landed him in Gwinnett County Jail.

Crime attempt #1: The 26-year-old man tried to steal a car near South Puckett and Ridge roads in Buford, Georgia.  He walked up to the car, opened a door, and ordered the male driver to get out. Instead, the male driver accelerated and sped away.

Crime attempt #2: The 26-year-old man attempted to carjack a different car near Ridge and Hamilton Mill roads. He walked up, ordered the female driver to get out of her car — but she refused. Instead, she called police. The suspect fled before officers arrived.

Crime attempt #3: The 26-year-old man (still unarmed) used a brick to smash a window and went inside a home on Woodtree Lane. Upon entry, he was met by an armed homeowner. The suspect quickly ran away and “led police on a foot chase” before being arrested.

All three crime attempts happened within 30 minutes — before 5:30 a.m.

LET’S WAIT MORE THAN A MINUTE: Plenty of questions remain about the March series of shootings at three massage parlors in metro Atlanta area. Eight people were killed, and six of them were Asian-American women.

But two facts are indisputable.

Fact #1: The Cherokee County Sheriff’s spokesman said the alleged shooter, Robert Aaron Long, was having a “bad day” and “this is what he did.”

No. A bad day is when you lose all your computer passwords. Or your car gets stolen. Or you leave your umbrella at home and must walk around in the rain all day, with frizzy poodlehead hair. A “bad day” is not  license to go on a killing spree. Ever. Period.

Hell, even Florida has a three-day mandatory waiting period between the purchase and delivery of firearms.

As state Rep. Matthew Wilson tweeted: “In Georgia, it’s easier to buy a gun than it is to vote.” —CL—