BLUES & BEYOND: Electrified and ready for blast-off 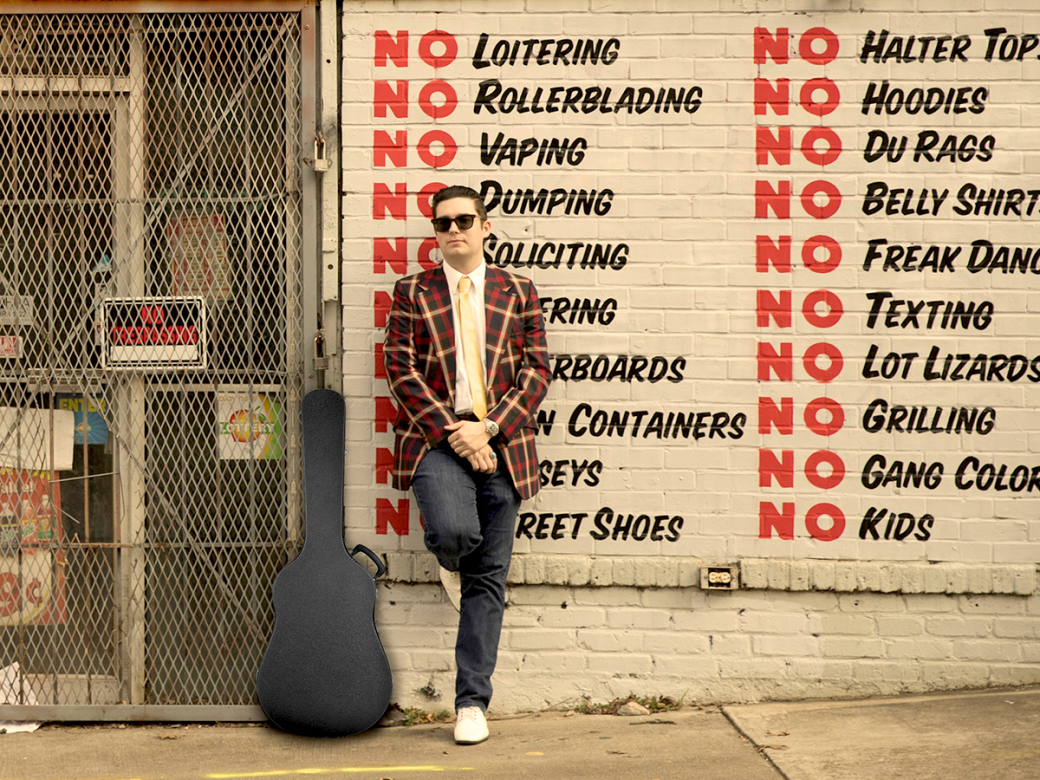 Atlanta is way past due. It has been far too long since a young Atlanta blues player made noise on the national and international stage with a well-distributed, high-profile album. Sean Costello was the last, local standard bearer — and that was over two decades ago.

Local blues enthusiasts may now cheer on Eddie 9V (Brooks Mason to his family), one of our own, for Little Black Flies. It’s the 25-year-old singer/songwriter/guitarist’s new Ruf label debut, his third CD overall, and a major commercial step into the competitive world of electric blues. Eddie has been at it for years, plugging away at both his indie rock band PREACHERVAN and the 9V project simultaneously. But with the release of Little Black Flies now a reality, he has jumped into the blues pool with both feet while he continues to concentrate on honing his sizzling guitar skills and animated live shows in the roots field.

Readers of this column will remember the Eddie 9V feature that appeared in May 2020’s Creative Loafing. That piece covered his background, influences, and his first studio set, 2019’s Left My Soul in Memphis, which he followed with 2020’s live Way Down the Alley. Catching up with the guitarist this time, it was to get the update on a year unlike any other — certainly the kind most players only dream of — that is, how his Ruf label deal came about, what he was aiming for musically while recording this third album, and what he’s looking forward to as he embarks on a journey that will take him to Europe in an effort to expand his fan base.

For Little Black Flies, Eddie assembled a group of local musician friends including Tedeschi Trucks Band bassist Brandon Boone and local young guitar peer Cody Matlock, ostensibly to participate in a jam session. But the jig was up when they got to Atlanta’s Echo Deco Studios and saw mics being placed and machines ready to roll. Still, Mason treated the recording as a live show, one where he calls out who solos next, makes up lyrics on the spot, and keeps the energy revved up to 11. It’s a mix of pure soul (the title track), tough Chicago-styled raw blues (“Miss James,” best known through Howlin’ Wolf) and soul/blues à la Albert King (“Travelin’ Man,” a cover from King’s catalog). There are also stops at John Lee Hooker-derived dark unplugged blues with the lowdown “Back on My Feet,” and even a bittersweet ballad (“Chicago 3AM”) for a diverse set that really does play like a typical small club gig. Eddie/Brooks sells it all with his high-velocity vocals that sound as if they may go off the rails, but somehow never do.

It all started with a personalized letter that accompanied a copy of his previous studio disc that Eddie sent to all the noteworthy blues labels. He heard back from Thomas Ruf, one-time manager of Luther Allison and owner of Germany’s high-profile imprint that bears his name. “He hit me back. He said, ‘Just for the fact that I get CDs every day, but not a letter. I loved the CD.’” Ruf flew to Atlanta to check out Eddie’s set at Blind Willie’s before everything closed down. At breakfast in Manuel’s Tavern the next day, Ruf said he was ready to sign Eddie to a three-album deal.

The sessions took place in August 2020. “I had a rough idea and a few songs written down in my composition book. We all went in and hit ‘record.’ The ‘Dog Me Around’ (a furiously rollicking shuffle) song that ended up on the album was the first take of the first session. We knew right then that we were on to something,” he excitedly explains. “I wanted to take some of my favorite blues from the ’60s and ’70s and throw my own words on them, which is what Junior Wells would have done to an old Muddy Waters tune.” It was all done quick and dirty in two or three sessions, with a bit more time polishing off the title track (which features Mandi Strachota’s backing vocals) and the second single “Chicago 3AM.” Eddie credits some of the effusive attitude that jumps out from these performances to the fact that the pandemic had curtailed live shows and this was the first time in a while everyone had played together again. “It was a blues party,” he notes, and the dynamic, unfiltered mix reflects that celebratory vibe. Having Mason’s brother, Lane Kelly, as producer also contributed to the home-style groove.

Thankfully, Ruf allowed Eddie complete creative control over the final product. “You do you,” Eddie remembers him saying, unusual advice for a new artist’s first widely distributed work. He even approved of the offhand studio chatter, inspired by old Fleetwood Mac recordings, that opens many cuts and were left in on purpose. “People like that because it puts them in the studio with you. It’s not like modern-day records that are pieced together.”

Eddie’s already looking forward to the next record, which he is currently writing. He’d like to record another one with his Atlanta friends before possibly moving to Germany to take advantage of the rabid European blues audiences. He then wants to return after establishing himself there. Or at least that’s the plan.

Right now, though, Eddie is basking in the glow of positive reviews for Little Black Flies and is as fired up about his next move as the playing on this record shows him to be. The vibrant Atlanta blues community, led by the support of the Atlanta Blues Society, has his back too, cheering him on to whatever comes next.  He’s young, talented, hungry — and ready for the future. 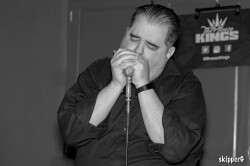 On Sunday May 30, veteran Atlanta bluesman Carlos “Breeze” Capote, founder and frontman for The Breeze Kings, passed away. The singer and harp player had been ill since December, 2019 and was hospitalized in May 2020. He never fully recovered from a kidney illness.
Capote, born September 23, 1972, formed his Breeze Kings band in 1997 with guitarist Jim Ransone. Other members came and went but the Ransone/Capote duo kept the group alive for 22 years until the latter’s health issues, as well as the coronavirus pandemic, put a halt to the live shows that were the outfit’s main source of income. The Breeze Kings released three band albums over the years and one duo set with Ransone that was also credited to the band. The most recent was 2012’s Can’t Stay Home, the title perhaps an indication of Capote’s work ethic that found him performing over 150 shows a year. The group was feted with Creative Loafing’s Best Local Blues Band awards, either critics or reader picks, at least nine times and was one of the top 10 finalists at the high profile 2005 International Blues Challenge in Memphis.
Capote’s life was built around the blues, so much so that he met his wife Terri — who was then an Atlanta Blues Society board member who was also instrumental in setting up the organization’s renowned Blues in the School’s education program — at an Atlanta Blues Society conference. They married in 2001. Over the years Capote played at almost every Blues in the Schools event, as well as mentoring younger players in the Atlanta scene, many of whom started their own bands. George Klein, current co-president of the Atlanta Blues Society who helped raise money for Capote’s kidney operation, says “In a nutshell, I know of no other family who has done more for the Atlanta blues scene than Carlos’. Any time there was a need, you’d see him on stage. That’s just the kind of guy he was.” Marian Daigler, one of the veteran blues voices of WRFG writes “There was never a time when WRFG asked that Carlos and the Breeze Kings didn’t say ‘Yes’.”
Ransone set up a Go Fund Me for Capote as his health declined. It has already raised over $34,000, though much more is needed.

Carlos Capote’s home-going service will be this Friday, June 4, 3:00 p.m., at Roswell Funeral Home, 950 Mansell Road, Roswell, 30076. Jim Ransone, Aaron Trubic, and Gregg Shapiro have organized what should be an appropriate send-off for Capote. This will be casual, no formal pomp and circumstance — just friends, music, and stories to tell. If you’d like to participate, please contact them.

Sat., June 12, Lost Art Music Festival, Foxhall Resort/Douglasville — The first major roots-oriented festival in over a year features an exciting roster headlined by the horn-heavy, soulful sounds of St. Paul and the Broken Bones. Also on the bill is the rocking husband and wife duo Shovels & Rope, the righteous gospel of The War and Treaty, and the cosmic American music from newbies The Pink Stones. A Friday night show with the always rocking Aaron Lee Tasjan is a bonus.

Sat., June 12, Damon Fowler, Blind Willie’s — Florida-based blues rocker Fowler has been slinging out his tough, funky, swamp-infused music since his 2009 debut. It’s the club’s first booking of a national touring act in almost a year. Hopefully blues lovers will turn out to support this talented and by now somewhat veteran young gun as he features music from his new Alafia Moon album.

Fri., June 18, 7 p.m. and 9:30 p.m. shows, Patterson Hood, City Winery — The Drive-By Truckers’ co-founder is never short of opinions on the state of the nation — or songs, of which he has an enormous catalog to tap into. Even solo and unplugged, he’s a magnetic performer. With the volume dropped a few notches, it’s easier to absorb his always erudite, compelling, and powerful lyrics.

Fri., June 25Grace Pettis, Red Clay Music Foundry/Duluth — Austinite Pettis, best known for her introspective, touchy/feely folk, dons tight leather pants on the cover of her new Working Woman disc, and rocks out accordingly with a band on a few tracks. She’s solo for this gig, so those rockers will take on a different vibe. Regardless, she’s an established, award-winning singer/songwriter who packs a powerful lyrical punch.

Sun., June 27Darrell Scott, Red Clay Music Foundry/Duluth — Veteran tunesmith Scott has a long, storied history working behind other stars, notably in Robert Plant’s Band of Joy, in addition to an impressive catalog of his own music. Recently he tore into a rocking blues album of Hank Williams covers that made some hidden Hank gems into new classics. He has a potent voice, a bagful of great songs, and knows how to enthrall an audience with his stories and music.

Sat., July 3Full Tilt featuring Sonny Emory, City Winery — “Local” drummer/instructor Emory has an impressive, even eye-popping list of artists he has worked with, including but far from limited to, Spyro Gyra, Steely Dan, and Eric Clapton. He will bring his Crusaders-styled jazz/funk/hip-hop fusion outfit this evening, which promises to be a searing show from Emory and his talented friends. —CL—