Georgia musicians exult in the spirit of Pasaquan; Atlanta musicians elate us with their new music 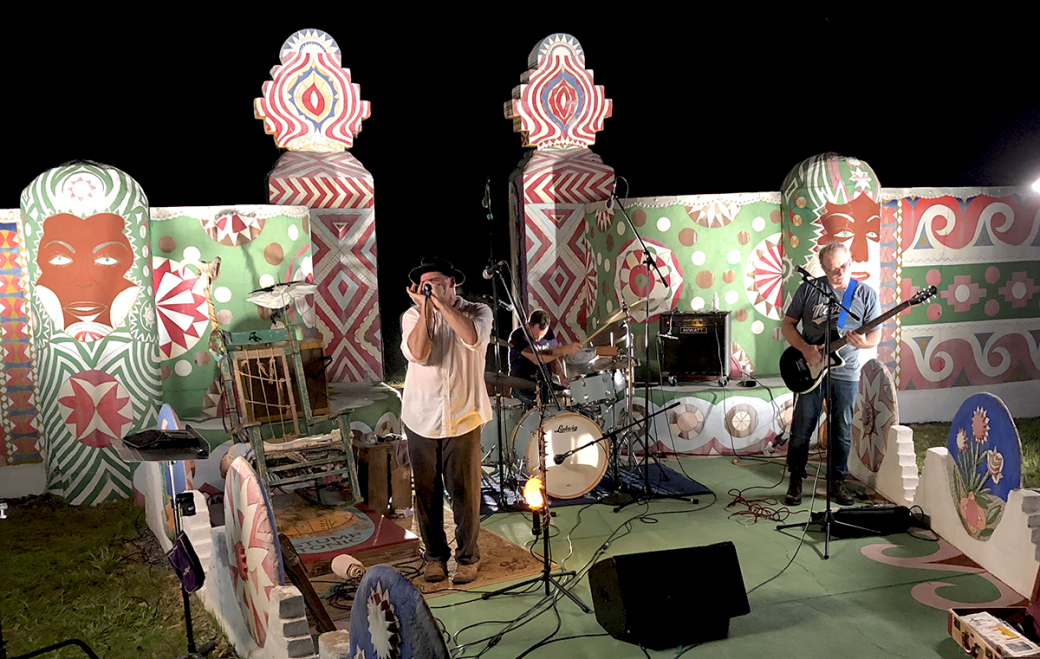 Photo credit: MICHAEL MCFALLS
WAILING AT PASAQUAN: Chickasaw Mudd Puppies performing under the stars and lights for ‘A Circle of Atoms: The Pasaquan Sessions.’
By DOUG DELOACH Thursday June 3, 2021 11:15 am EDT

So we’re on our way back into the breach. Vaccinated and wary, masked when appropriate, we’re venturing back into the garden of earthly delights with fellow human beings in reasonable proximity, attended by the occasional hug. Thanks be to science in the service of wise administrative governance, and no thanks to the nation’s deplorables and their obdurate wingnut idiocy.

Speaking of which: There’s a special election on June 15 in North Cobb for state representative of House District 34, which covers Kennesaw and a portion of Marietta. The Republican who won in November bailed on a pledge to serve his constituents in favor of a sweet job at Georgia Tech. Go figure. The Democrat he defeated, Priscilla Smith, is back in the running to lead the district with a sharply honed progressive agenda and the moxie to hold her own in the General Assembly. Vote for Priscilla on June 15 or donate to the cause. Keep the blue train rolling full steam ahead.

Y’all know about Pasaquan, right, the phantasmagorical 7-acre art compound in southwest Georgia near Buena Vista? (If not, maybe you’ve been amazed by the outdoor exhibit of colorful art work in the Folk Art Park, located downtown on Courtland Street at the I-85 overpass.) Constructed with minimal assistance over three decades by Eddie Owens Martin, otherwise known as St. EOM (pronounced ohm), Pasaquan is one of the world’s great visionary art environments. “Pasaquan lavishly fuses African, pre-Columbian Mexico and Native American cultural and religious symbols and designs, along with motifs inspired by James Churchward’s books about the ‘Lost Continent of MU,’” according to Columbus State University (CSU), which serves as the site’s institutional caretaker. 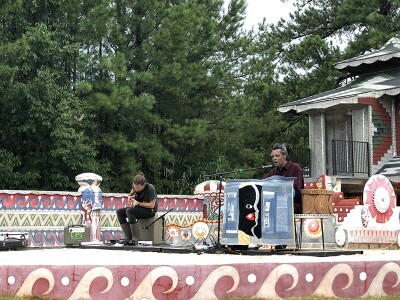 EARTH, WE HAVE A PROBLEM is the title of an improvised song by Lonnie Holley and Christopher Paul Stelling included on the album ‘A Circle of Atoms: The Pasaquan Sessions.’ Photo credit: MICHAEL MCFALLS

As the self-ordained first Earthly citizen of an alien race called the Pasaquoyans, St. EOM advocated for a peaceful world in which human beings live in harmony with nature, seeking enlightenment through ritual practices, some of which involved donning brightly hued levitation suits and coiffing one’s hair to simulate the reversal of a gravitational predisposition to falling. About the Pasaquan compound, St. EOM once said, “Here, I can be in my own world with my temples and designs and the spirit of God. I can have my own spirits and my own thoughts.” Derived from a combination of Spanish and Oriental words, pasaquan roughly translates to “bringing the past and future together.” In 1986, following years of failing health, Martin committed suicide at age 77.

In 2016, after an extended period of degradation, Pasaquan was restored to its current glorious state, thanks to a collaborative effort by the Pasaquan Preservation Society (PPS) and CSU and with major funding from the Kohler Foundation. In recent years, PPS and CSU have staged Pasafest, an annual outdoor concert and arts fair on the Pasaquan property. When COVID compelled the cancelation of last year’s fund-raising fandango, organizers pivoted to producing a series of videos showcasing the scheduled artists. In turn, the video production spawned A Circle of Atoms: The Pasaquan Sessions, a limited-edition vinyl release featuring a subset of the Pasafest participants.

Contained within A Circle of Atoms is a constellation of Georgia-centric artists: James Husband, Robert Coleman, Nikki Speake, Crispin Wah, Jim White, Chickasaw Mudd Puppies and Lonnie Holley. Some songs, such as Husband’s “Goin’ Pasaquan,” directly evoke the physical site and mystical ruminations of its creator; other tracks, including White’s “Sum of What We’ve Been” and Speake’s “Blue Moonlight,” bear a poignant, albeit loosely thematic, relationship with the Pasaquoyan ethos.

Recorded in July on the grounds and inside the main house at Pasaquan, A Circle of Atoms represents a joint venture between CSU, PPS, and Institute 193, a nonprofit art space and publisher in Lexington, Kentucky. Institute 193 was founded by Phillip March Jones, an artist, curator, and inaugural director of the Souls Grown Deep Foundation.

“I’m pretty sure it was Phillip who first suggested making a record, since we were already making the music videos,” said Michael McFalls, associate professor of art at CSU and director of Pasaquan.

For production assistance, McFalls enlisted CSU colleague Dr. Matthew McCabe, an assistant professor and supervisor of the Schwob School of Music’s techno-acoustic activities. In addition to mixing and engineering A Circle of Atoms, McCabe turned the project into a hands-on, masked, and socially distanced learning experience for some of the school’s graduate and undergraduate students.

“The whole process was fun in a strange way,” McFalls said. “It was awkward because the pandemic made everything feel so uncertain. There were only a few of us doing anything at any given time.” 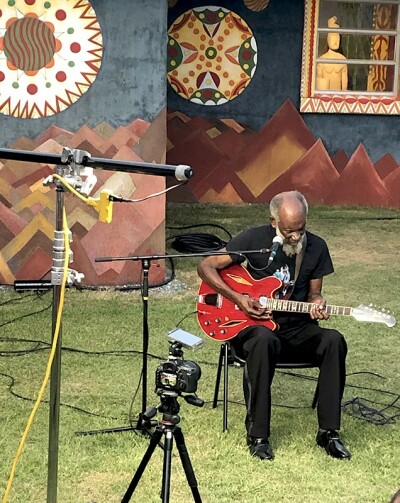 MACON BLUES ICON Robert Coleman gets ready to play his song, “Somebody Loves Me,” for ‘A Circle of Atoms: The Pasaquan Sessions.’ Photo credit: MICHAEL MCFALLS

“Earth, We Have a Problem” was improvised by Lonnie Holley and Christopher Paul Stelling on a steamy afternoon in Pasaquan’s large circular sandpit, St. EOM’s preferred spot for dancing, poetry readings, and other happenings. Accompanied by Stelling’s languid electric guitar thrumming and Holley’s simple, melodically astute, organ fingering, the singer muses on the seemingly paradoxical existence of “Such a lovely place, a spot in the wilderness, the passersby don’t even know that it’s here” in the midst of plagues both literal (COVID) and figurative. “I can’t breathe,” Holley intones at the end of the song, invoking the dying plea of George Floyd, who was brutally murdered by Minneapolis police in May of 2020.

“The performance in the sandpit was amazing,” McFalls recalled. “Lonnie was definitely channeling some sort of spirit.”

That would be the spirit that inhabits every three-dimensional groove of A Circle of Atoms: the Pasaquan Sessions, the spirit of Eddie Owens Martin, an unbridled visionary and eccentric Southern artist whose legacy will forever inspire the world he transcended with singular poetic grace.

DUET FOR THEREMIN AND LAP STEEL


’Oumuamua is the unusual title of the latest album by Duet for Theremin and Lap Steel. A special outdoor concert celebrating the release of the double-CD, which drops May 28 at Bandcamp, Spotify, and other online sites, is scheduled for Saturday, June 12, at Railroad Earth in Emory Village. DfTaLS will perform around 8:30 p.m., followed by W8ing4UFOs.

The album takes its name from the first confirmed interstellar object to visit our solar system, which was detected in October 2017 by Robert Weryk at Haleakalā Observatory in Hawaii. Anyone who has listened to an album or attended a performance by Scott Burland (theremin) and Frank Schultz (lap steel) will not wonder about the relationship between a mysterious interstellar traveler from deep space and DfTaLS’s music, which tends to induce a profoundly contemplative state of mind readily susceptible to delightful flights of the imagination. 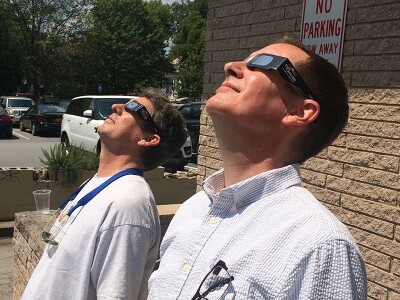 WAITING FOR UFOS: Frank Schultz (left) and Scott Burland, also known as Duet for Theremin and Lap Steel, scan the skies for signs of ‘’Oumuamua,’ their new double-CD, the release of which will be celebrated by a concert at Railroad Earth on Saturday, June 12, on a bill with W8ing4UFOs. Photo credit: TERRA ELAN MCVOY

When asked whether the COVID-induced lockdown exerted an impact on the production or performance of ’Oumuamua, which was recorded in fall/winter of 2020, Schultz replied by email: “I am sure it did, but I am still unpacking a lot of that stuff. Maybe more impactful for me was the death rattle (and actions) of hateful, racist, and corrupt Republicans and their last ditch efforts to cling to their power, even though they lost the Presidential election and the Senate.”

Burland’s response was somewhat more germane to the question: “Frank and I felt comfortable getting together to play throughout [the pandemic] and were vaccinated early on, so it was less of an issue … In the beginning, say March 2020, I was glad for the COVID-induced break. I guess I needed it.”

Neither musician relies on music to pay the bills, which is one of the reasons why DfTaLS donated proceeds from their last album, Halocline, to the Atlanta Musician’s Emergency Relief Fund and Giving Kitchen, which benefits food service workers. Donations at the ’Oumuamua release concert will benefit Railroad Earth, one of Atlanta’s most enduring nonprofit arts collectives, and W8ing4UFOs.

About the upcoming gig, the first in front of a live audience in more than a year, Schultz said, “I am looking forward to some hugs, a lot smiling faces, and some long overdue fellowship.”

So say we all.


A few weeks ago, I checked in with Jeff Crompton, composer, saxophonist, and founder of a couple of jazz trios, which are venturing into the public realm in the next few weeks. I wanted to know what it feels like to anticipate performing in front of an audience after a year-long hiatus.

“I did a couple of streaming concerts early in the pandemic, but became disenchanted with that medium pretty quickly,” Crompton responded by email. “A short outdoor performance by Anagrams (my duo with JD Walsh) in October felt so good, so enriching, that it felt like a turning point. But, around that time, the infection rate skyrocketed. It seemed irresponsible to do any more public performances until a vaccine was available.” 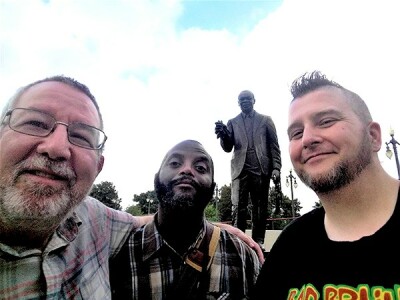 Today, working under the assumption that the vast majority of his audience has availed themselves of one brand of preventative COVID maintenance or another, Crompton thinks the time has come to return to the bandstand. On Saturday, June 12, Three Way Mirror, which features Crompton on alto sax and clarinet; Bill Pritchard on tuba, acoustic and electric bass; and John Arthur (YaYa) Brown on percussion, will be performing outside at Elliott Street Pub downtown in the shadow of Mercedes-Benz Stadium. Crompton says the set list will comprise selections from the trio’s New Normal album along with new tunes.

“Music is one of the few aspects of life that make sense to me,” Crompton says. “It’s as essential to me as eating or breathing.”

The composer, whose mini-opera-on-video, Buddy Bolden, debuted during the pandemic, says he wrote a lot of music while quarantined, “but almost none of it was any good.” Only when live performances loomed possible did the muse sufficiently compel the artist to produce art worthy of public exposition.

”It’s only through interaction with an audience that music really comes to life,” says Crompton.

No one around here is going to disagree with that. —CL—