SCREEN TIME: Riders on the tweetstorm 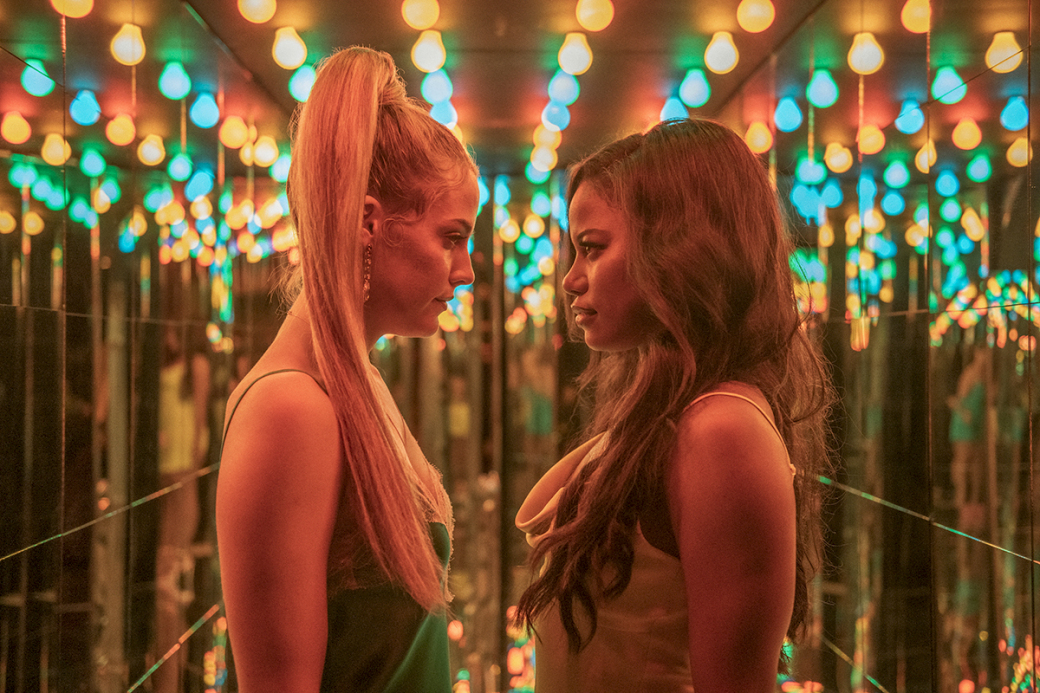 People complain that Hollywood doesn’t make original movies anymore, but the lack of originality isn’t really the problem. Most major movies tend to be based on well-established intellectual properties to justify their huge budgets. Thus, nearly everything produced for theatrical release is some kind of sequel, remake, or adaptation of a familiar name like, say, Jungle Cruise, based on the theme park ride.

But adapted screenplays aren’t inherently compromised, depending on what they adapt and how they adapt it. The new, low-budget comedy-thriller Zola draws on a unique source: a notorious 2015 Twitter thread recounting how two exotic dancers spent a sordid, disastrous weekend in Tampa. Stranger than fiction, the 148 tweets from A’Ziah King, a.k.a. “Zola,” found viral fame and led to a Rolling Stone article that more or less confirmed their veracity. King, now based in Atlanta, serves as an executive producer of the energetic, inventive movie directed by Janicza Bravo.

The film’s voiceover narration from Taylour Paige in the title role draws directly from the tweets: “Y’all wanna hear a story about why me and this bitch here fell out? It’s kind of long but full of suspense,” she announces at the outset. While waitressing, Zola she strikes up a friendship with a young customer named Stefani (singer Riley Keough), and they bond over their shared experience as occasional pole dancers.

Stefani invites Zola on a road trip to Florida to earn thousands of dollars a night stripping at a club. “We just met yesterday and you already trying to take ho trips together?” Zola replies. The screenplay by Bravo and Jeremy O. Harris relishes slangy dialogue, like its use of social media-style shorthand and the way the word “bitch” can have subtly different meanings.

When the trip begins, Zola almost immediately detects a weird, tense dynamic between Stefani, her frivolous boyfriend (“Succession’s” Nicholas Braun), and her mysterious “roommate” (Coleman Domingo) known only as “X.” As they journey from fleabag motels to seedy clubs to sleek hotel suites, Zola discovers that Stefani’s been dishonest with her and “X” is far more threatening than she imagined. Domingo, recently seen in Netflix’s Ma Rainey’s Black Bottom, gives a terrifying, mercurial performance, with soft-spoken charm that belies a capacity for volcanic rage.

Bravo makes an impressive directorial debut, effectively switching the tone from comedy to suspense to moments of surprisingly quiet lyricism on ugly highways and stripper poles. Zola’s depictions of nudity and sexuality never feel tailored to the male gaze, instead reflecting the women’s point of view and feelings about their own bodies.

Throughout the 48-hour odyssey of fraught, sleazy situations, Zola maintains her integrity and personal code of conduct. When she finds out that the Tampa club has a “pasties and panties” policy, she objects that she’s a fully-nude dancer. She draws the line at prostituting herself, but advocates that, if a woman is a sex worker, she should get paid what she’s worth.

At times, Zola can seem self-consciously stylish and a little too impressed with itself for being based on a social media story, when the script could dig a little deeper into the characters of the women. Fortunately, in dialogue-free moments Paige and Keough’s performances help bring out the nuances in their relationship and how they perceive each other. Stefani may be a liar, but the audience realizes that she’s also a victim in the situation.

At its best, Zola takes viewers on a wild ride through an extralegal underworld, while conveying how modern social media shapes interpersonal discourse. And even though it’s adapted from another medium, Zola feels vastly fresher and more original than Hollywood’s billion-dollar franchises.

Matinee Idols: Any chance to see old movies in a theater should be seized, and Landmark Midtown Art Cinema’s Summer Mega Matinees, held Saturdays and Sundays at 11 a.m. through August15, offers a particularly lively lineup. In previous years the series has emphasized the films of Studio Ghibli, with this year offering five of its animated classics, including the epic Princess Mononoke.

But the 2021 slate also digs a little deeper into beloved film series from Hong Kong and Japan, programming Bruce Lee movies, kaiju films like Destroy All Monsters, two of Jackie Chan’s Police Story thrillers, and a pair of the Lone Wolf and Cub samurai flicks.

Chan and Lee’s martial arts choreography and “practical” stunt work never fail to impress. And even Godzilla’s rubber monster suits and model buildings can be deliriously fun when watched with a crowd on a big screen. Don’t let the morning showtime fool you, as the Mega Matinee films are too entertaining to be just for kids. (See landmarktheatres.com/atlanta/midtown-art-cinema for full schedule.) —CL—