THE BLOTTER: Clash with the fuzz 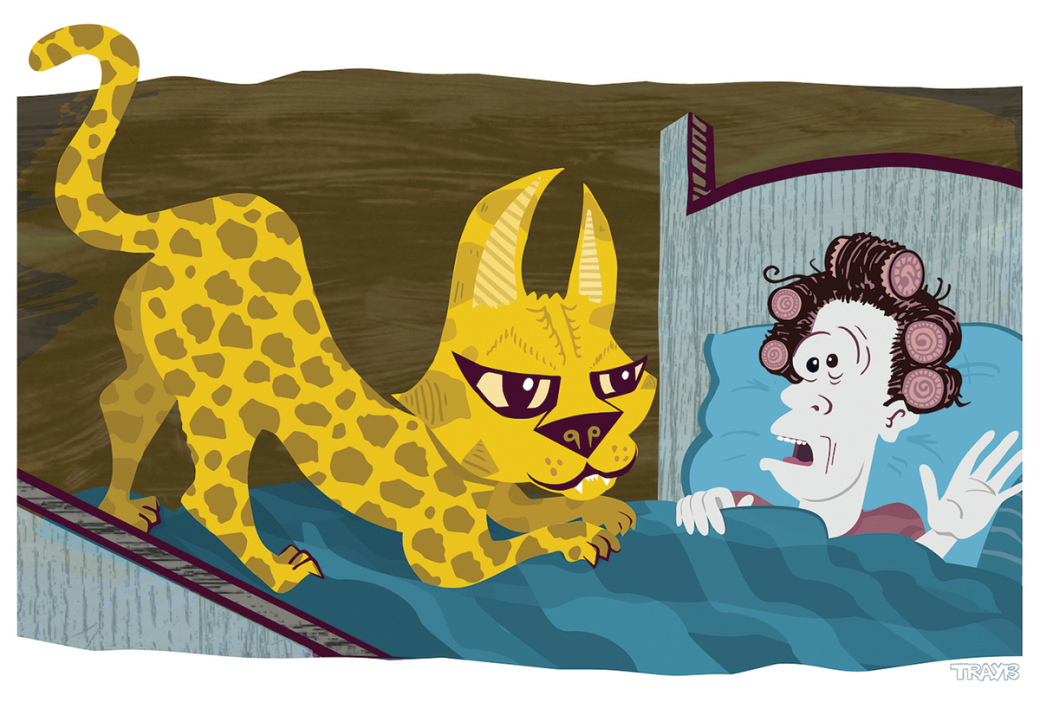 A Georgia family found 18 snakes in their bedroom. Eighteen.

“Before going to bed, I spotted what I thought was a piece of fuzz on the floor, went to reach for it — and it moved,” Trish Wilcher of Augusta, Georgia, posted on Facebook. “And then a second later, another piece moved, and I went to my husband, ‘We have snakes!’”

Wilcher posted photos of the snakes — most of them not yet full grown. “Look at all the baby snakes in my bedroom … I am freaked out.”

Wilcher says initially, she counted nine snakes. She even found the “momma” snake under her bed. The Wilcher family turned the bedroom “upside down” looking for snakes. After finding 10, the Wilchers called in a wildlife trapper, who came to their home and found eight more: in total, 17 babies plus the “momma” snake, according to WSB-TV.

Apparently, Wilcher’s husband Max took a grabber tool and put the snakes in a linen bag, the released them all into a nearby creek area. Bravo, brave Max!

“I may need a cardiologist after this!!!” joked Trish Wilcher. The trapper identified the momma and babies as harmless garter snakes.

In Midtown, the iconic Krispy Kreme burned down — again. For the second time in five months, firefighters battled flames at the legendary donut shop that has graced Ponce de Leon Avenue for six decades. Video posted online showed fire shooting through the roof.

Krispy Kreme has been closed since February 10. That’s when a suspected arsonist set fire to the place, causing catastrophic damage. Krispy Kreme was still closed for rebuilding when the most recent fire erupted in July. The exact cause remains under investigation.

Here’s our Blotter message to Shaq: “Don’t give up, pal. Despite two fires, we want our all-time favorite doughnut shop to come back soon.”

Plus this: “C’mon, Shaq, you may need to hire some extra security in the meantime to guard the iconic Krispy Kreme during rebuilding. Or at least keep some water and hoses on hand for potential fires? Just a thought.”

In Buckhead, a red-haired woman left a suspicious small box near a traffic light at the intersection of Roswell and Wieuca roads. The redhead made her odd drop-off at 10:22 a.m. on a Saturday, according to a witness who spoke with CBS46.com.

Investigators opened the box, and found zero explosives. Instead, the box contained the remains of a dead bird.

Apparently, the red-haired woman is still at large.

IT’S NOT EASY BEING GREEN

A green-haired woman was duct-taped to her seat after allegedly trying to open an airplane door midflight. That’s according to American Airlines.

The main witness who spoke to the media — Elizabeth LaClair — was on the plane, traveling home to Augusta, Georgia, after her hiking trip in Utah.

LaClair said she heard a woman sitting behind her say to the man in the adjacent seat that she didn’t want the plane “to fly up any more.” “She just seemed off and very odd,” LaClair told the Washington Post. “She started getting more and more agitated and very loud, and the man sitting next to her, along with the flight attendants, kindly tried to console her and calm her, but nothing worked.”

“It was the look of pure shock of someone who, I imagine,has been a flight attendant for many years and is thinking, I can’t believe this is happening,” LaClair said.

“After being partially restrained in the crew area, LaClair said, the woman seemed to become more erratic and violent by the minute, kicking and screaming expletives and causing ‘a ruckus,’” reported the Washington Post.

During the ruckus, flight attendants asked passengers in the rows ahead of and behind the woman to stand up so employees could subdue the woman and duct-tape her to her seat.

LaClair said the woman continued to curse and yell obscenities throughout the flight. “All we wanted was for the flight to land, which felt like an eternity.”

American Airlines confirmed the incident in a statement to the Post. “We applaud our crew for their professionalism and quick effort to protect those on board.”

In Sandy Springs, a falling tree crushed a truck traveling on I-285. The male driver said, “The tree went through it! I saw the cars swerve — and boom!!” according to Fox5Atlanta. The crash happened in the eastbound lanes of I-285 near New Northside Drive.

It gets worse. The unlucky driver had just purchased the truck a few months ago. Now, he’s worried about how he’s gonna get to and from his doctors’ appointments without a reliable ride.

In another unlucky stroke, the male driver ain’t gonna get any money from the Georgia Department of Transportation to replace his truck. According to GDOT, the tree stood on private property before it tumbled. Good luck with that.

An Atlanta woman woke up to a heinously unexpected bedmate: A large African wild cat beside her in bed.

Kristine Frank of Brookhaven has never experienced anything close to this bizarre in her eight years in the city. Her bedmate: An African serval, which is often mistaken for a cheetah or a leopard, and is sometimes kept as an exotic pet.

“I yell for my husband and yell, ‘Dave, that is not a cat! So he comes in the room, and I’m just in bed freaking out. He locked eyes with the cat, and the cat was kind of cornered. So, I slowly got out of the bed and tippy-toed out, and my husband was able to get the cat out of the house,” Frank told WXIA.

Husband Dave snapped a photo as the cat ran away (otherwise, would anyone believe this?).

The Franks called authorities. Officials believed the serval was “in the area of the Capital City Country Club, between Buckhead and Brookhaven … last seen near the country club’s golf course,” according to WSB-TV.

After a few days, the serval was finally captured (near the country club’s golf course.) The owner said she’s from South Carolina, where it’s legal to own servals — and her wild cat is named “Nala” after the Disney princess. She moved to Georgia to attend college. With her serval?

The serval likely got into Frank’s home when she let her dog outside in the middle of the night.

Yes, folks, it’s illegal to own a wild serval as a pet in the state of Georgia. —CL—

Items in the Blotter are taken from actual Atlanta police reports and local media outlets. The Blotter Diva compiles them and puts them into her own words.