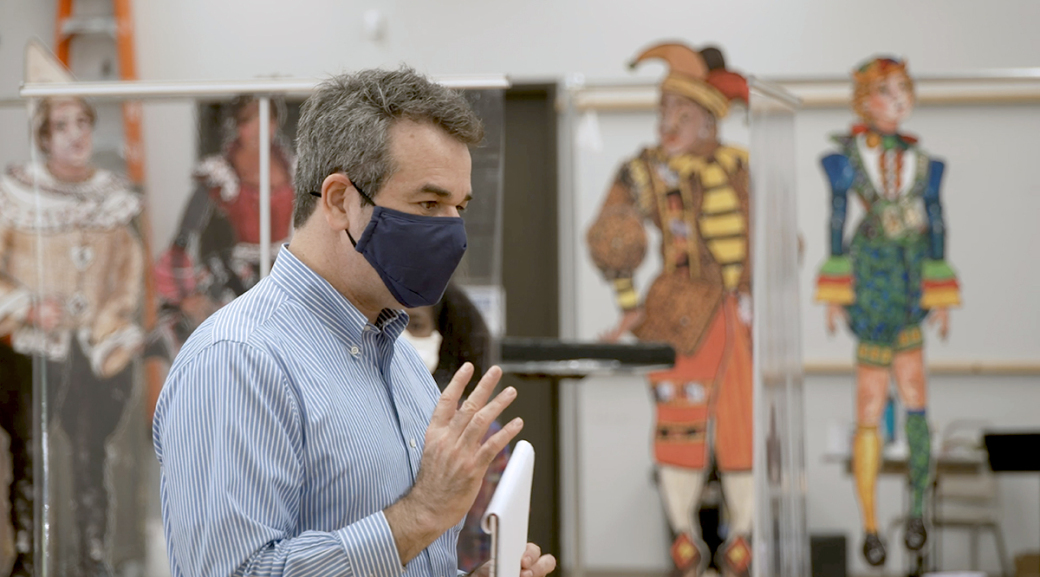 Photo credit: Felipe Barral
FINDING THE TRUTH: Seen here in rehearsal for a production from last season, Israeli-born Tomer Zvulun has been the general and artistic director of The Atlanta Opera since 2013. Zvulun will steer the company through six productions during the 2021-22 season, which kicked off in November with George Frideric Handel's <i>Julius Caesar</i> at the Cobb Energy Performing Arts Centre.
By DOUG DELOACH Wednesday December 1, 2021 01:50 pm EST

On a wet, cold Thursday afternoon in late October, your correspondent arrived at the offices of The Atlanta Opera Company at Atlanta Technology Center. The cast of The Atlanta Opera was rehearsing a new production of Julius Caesar, which would open the 2021-22 season on November 6 at the Cobb Energy Performing Arts Centre. I hopped out of the car and scampered into the building just in time to catch Tolomeo, King of Egypt and brother of Cleopatra, ordering the imprisonment of Cornelia (wife of Pompeo, recently defeated in battle by Caesar) and her son Sesto, the latter two having just sworn lethal vengeance upon the monarch.

The large, open, starkly industrial room was brightly lit. Everyone including the primary singers wore street clothes. A few random props were in hand: swords, javelins, plastic chains and a royal Egyptian headdress. While the singers moved around “the stage,” a couple of “stagehands” periodically repositioned a large square tarp, representing what would later be revealed as a clever bit of stage design in the form of a pyramid, spread flat on the floor. Cast members not in the scene sat in office chairs strewn around the perimeter of the space or stood leaning against walls, quietly chatting or tapping on their mobile devices.

The pianist, the only instrumental accompaniment, played a short introductory phrase, signaling either the beginning of the scene or some action within the scene, followed by the keenly resonant voices of countertenor Daniel Moody (Tolomeo), mezzo-soprano Renée Tatun (Cornelia) and mezzo Megan Marino (Sesto) in full operatic flight.

Watching it all transpire, Atlanta Opera general and artistic director Tomer Zvulun sat in a chair in front of the performers, making notes in a copy of the libretto for ‘Julius Caesar,’ which was written by Nicola Francesco Haym nearly three centuries ago. From time to time, Zvulun interrupted the proceedings to instruct the singers to provide an extra bit of emotive expression here or move in a slightly more demonstrative manner there.

During a break in the rehearsal, Zvulun sat down with Listening Post to discuss, among other pertinent topics, Julius Caesar and The Atlanta Opera’s 2021-22 season.

Doug DeLoach: After a two-year lockout imposed by the coronavirus pandemic, where are you today in the process of returning to the Cobb Energy Performing Arts Centre with this particular production?

Tomer Zvulun: We are one day before the final run-through, honing in things before tomorrow when we run the whole show without stopping. It takes about two to three weeks to get to this phase. It starts with a concept, which, in this case, was doing Handel’s Baroque Julius Caesar so that it carries vibes of Dune or Game of Thrones.

Keep in mind, we haven’t rehearsed a show for the mainstage in two years. A couple of the singers — Jasmine Habersham who sings Cleopatra and sang Micaëla in last season’s production of Carmen and Meg Marino who sings Sesto and sang the title role in Carmen — are Company Players. But most of these artists have not sung in two years. On top of that, you have twelve dancers. Bringing Donald Byrd’s choreography into the fold has been a complex thing. We added a week for the choreographer to work with the dancers because their work is so crucial to the show.

This production is a two-and-a-half hour opera with many recitatives and duets/arias. You start by spending about an hour or more on each of those five-minute numbers, working on the clearest way to tell the story. The singers go home and think about it. They work with coaches on the music. They work with the choreographers. Then we do it again and again until we get to a place like today, where it’s more fluid and easygoing.

My job is to watch and listen and tell them where, basically, I don’t believe what’s happening. It’s all about finding the truth.

Despite the fact that Julius Caesar is the oldest opera The Atlanta Opera has ever presented, the company has a reputation for programming and staging productions that resonate with contemporary audiences. In what way or ways does the 2021-22 season achieve this core goal? 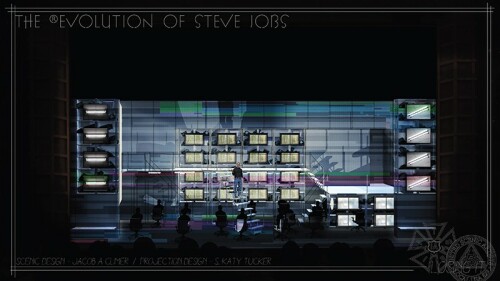 WHAT’S TO COME: Pictured is an artist’s rendering of the set for ‘The (R)evolution of Steve Jobs,’ composed by Mason Bates with a libretto by Mark Campbell, which concludes The Atlanta Opera season in April. PHOTO CREDIT: Jacob A. Climer and S. Katy Tucker

Zvulun: I love finding things that reverberate with the times and capture the zeitgeist. If you look at Julius Caesar and The (R)evolution of Steve Jobs, they are about two leaders, both of whom died when they were 56. They changed the world in their own way and left a mark, but both men were also tortured, flawed human beings.

We’re all flawed. We all have our reasons to behave the way we behave. In opera, from The Flying Dutchman to Falstaff to the Count in The Marriage of Figaro, all of those characters are multi-dimensional. That’s why I love having Julius Cesar and Steve Jobs bookending the season.

How do the other two mainstage productions, The Pirates of Penzance and The Barber of Seville, fit into the seasonal arc?

Zvulun: We wanted to do shows that would inspire people, that would lift them up. We’ve had enough tragedy in the past two years. Including those two operas came from wanting to provide something optimistic, adventurous and comedic. Something that was fun. Although Julius Caesar and Steve Jobs have hints of tragedy and melancholy woven into them, overall, they are inspiring in terms of the stories of those people. 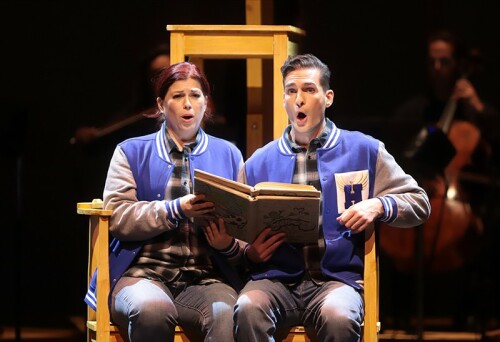 THE ‘DISCOVERY” SERIES: Blythe Gaissert as ‘Hannah After’ and Michael Kelly as ‘Hannah Before’ in a 2019 production by Opera Columbus of ‘As One,’ by Laura Kaminsky (music and concept), Mark Campbell (libretto) and Kimberly Reed (libretto and film). The innovative chamber opera is one of two productions, which will be staged under the Big Tent during The Atlanta Opera’s 2021-22 season. PHOTO CREDIT: Terry Gilliam

The last two operas of the season, Cabaret and As One, are being presented under the Big Tent, which was such a highly popular innovation last season. They also fall under The Discoveries Series, which historically presents newer works and chamber operas. What sets these productions apart from this season’s mainstage programming?

Zvulun: The end of the season definitely has a theme, which is what happens to a society when we are scared of ‘the other,’ when we don’t accept people who are different than us. Cabaret is about Germany in the 1930s and the dangers awaiting gays and Jews from the Nazi monster. Similarly, As One is about the journey of a transgender/transwoman and what it means to live in a non-accepting world.

What is the motivation behind The 96-Hour Opera Project, which was introduced this season?

Zvulun: The 96-Hour Opera project is about creating a pressure cooker for teams who will be coming to Atlanta where they will write a short, 10-minute piece, which will be judged by a jury. The winning team will be commissioned by The Atlanta Opera to write an opera and receive a cash prize.

The themes we are going to ask them to write about will resonate with the idea of Atlanta’s diversity. We are collaborating with the Atlanta History Center, the Center for Civil Rights and other organizations to select stories, which have to do with Joe Louis, Martin Luther King, Jr., and the list goes on. As an immigrant, one of the reasons why I love Atlanta is the richness that comes from the diversity of people who live here. Finding a way to echo that [[[[[[[diversity] in everything we do is very important.

In what way or ways is the pandemic continuing to affect Atlanta Opera programming?

Zvulun: Right now, we cannot do “grand opera” with hundreds of artists onstage or in the pit. It’s too dangerous. If you look at the whole season, Julius Caesar has a smaller orchestra in the pit and no chorus. Barber of Seville has a smaller chorus and Pirates of Penzance has the same thing: no more than 20 people; Steve Jobs has sixteen with a smaller band in the pit.

We can’t foresee the future. We have to be able to pivot, something which we have a lot of experience doing. That said, we are planning a spectacular 2022-23 season with eight operas. We’ll bring Puccini back and Wagner, Mozart, a big Bernstein, lots of important works. We’re praying we can do them all. —CL—

For tickets, visit The Atlanta Opera at www.atlantaopera.org/tickets or call 404-881-8885.