GRAZING: ‘You’ve got to know your chicken’

In the ATL, there is plenty to know

In this time of skyrocketing inflation, chickens continue their fight to push cows into extinction, as Chick-fil-A has urged for years. That company has retained its domination of the sandwich market, only briefly relegated to second place by the debut of Popeyes’ sandwich in 2019. While burgers still retain the majority of the market, chicken sandwich sales have increased 420 percent in the last two years!

As longtime readers of this column know, I’ve been a fanatical consumer of Popeyes chicken for decades. I was ridiculed, spat upon, and dragged through the mud by serious foodies until the likes of Anthony Bourdain confessed his own idolization of the crunchy, spicy, cajun-inspired chicken also long-endorsed by Paul Prudhomme (along with the red beans and rice). When Popeyes’ sandwich almost immediately became a victim of Covid-style supply-chain shortages, I nearly died from an overdose of schadenfreude. I did manage to score a few sandwiches at two different locations and they were perfect.

Alas, that’s apparently changed. Last month, I again checked out the sandwich at two locations. I risked Omicron and ate inside. In both cases, I received sandwiches whose expectedly crispy breasts were basically coated in grainy mush, probably from sitting too long in their foil wrappers. I didn’t complain. I looked out the window of the Boulevard location for someone homeless who might appreciate donation of a mainly uneaten sandwich. Apparently, the homeless have likely learned about the icky crust and moved to the nearby Wendy’s. 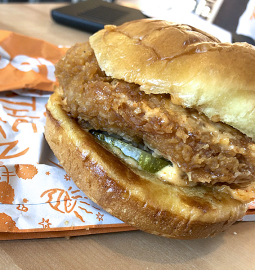 POPEYES NEEDS URGENT CARE: Unless you snag a freshly made sandwich, you might end up with no crunch and a ton of goo. Photo credit: Cliff Bostock. 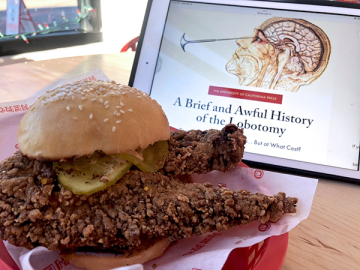 INSTEAD OF A LOBOTOMY: Choose a tooth-shaped Super Crunch at Hero's. This one was in the fryer a little too long, but they offered to cook another and threw in a free doughnut. Photo credit: Cliff Bostock. 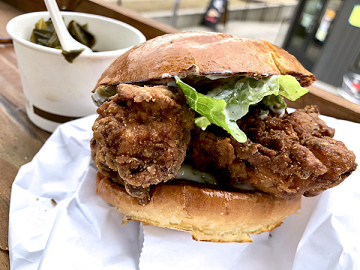 DILL-ICIOUS: The Classic at How Crispy Express features a fried chicken thigh and a spread loaded with dill, tarragon, and lemon. Photo credit: Cliff Bostock.

It's okay, because I have been addicted to the Super Crunch chicken sandwich at Hero Doughnuts & Buns in Summerhill for well over a year. Honestly, I could easily eat one every day. The downside is that it costs $9.29 compared to Popeyes’ $3.99. Get a combo at Hero and you’ll be spending over $15 with tax and a decent tip, compared to $6.99 at Popeyes. But a true addiction is undeterred by a 50-percent-higher cost. Add a bread pudding donut to smear on your face while driving home and you might spend $20 at Hero.

Now comes a competing, long-anticipated chicken sandwich café, also in Summerhill, How Crispy Express. The idea for it was hatched more than two years ago by Will Sibernagel, former chef at Argosy and Bookhouse Pub. He pulled Ticonderoga Club’s Greg Best and Bart Sasso into the plan. As soon as they got started, their plans were derailed by construction issues at an initially chosen different site. Then they shifted to the Summerhill location and the pandemic slowed things again. Not being chicken-hearted, they persevered and initiated pop-ups, most famously across the street at Halfway Crooks, where sandwiches were lowered in a basket from an upstairs window to the squawking flocks of hungry customers.

I’ve visited the restaurant twice. At this writing there was no seating inside the tiny space, but there’s a patio where you can stand. (Stools for inside seating are on the way.) The restaurant is neighbored by Woods Chapel BBQ, which has a gigantic patio with seating. Since there were very few people there and the weather was fine, I stole a seat there during both visits, as did several other customers, but you shouldn’t do that, of course.

The big difference here is that the sandwiches are made with fried thighs instead of the usual breasts. Don’t worry; they are as huge as the typical white-meat sandwich. I have to admit that I was disconcerted by the thighs, even though that’s typically what I use when I cook chicken at home. The dark meat is definitely richer than the usual white and I even left a few bites of my “classic” sandwich behind. It was slathered with an “herby spread” and layered with lettuce and bread and butter pickles on a “good bun.” To be more honest than I want to be, the severely crunchy sandwich did not make me crow. That herby spread tasted peculiar enough to me that, halfway through eating, I went back inside to ask what was in it. “Mainly dill, tarragon, and lemon,” the cashier told me. “Okay,” I said, reading aloud from my phone’s picture of the menu, “let me try a slice of this Coca-Cola cake with chocolate cream cheese frosting and salted peanuts I saw online.” They didn’t have any. I later waddled across the street to Big Softie for a gigantic ice cream cone, but they don’t open until 3 p.m., which is when How Crispy closes. 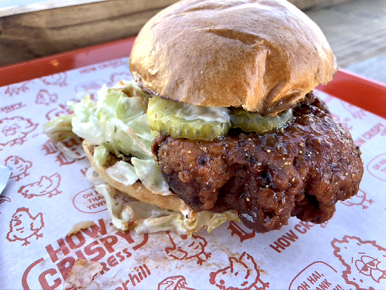 THIGH FIVE IT: Yeah, bruh, the Buffalo style sandwich is slightly spicy and it's got your ranch, your lemon-pepper, plus your shrettuce but no shrelery. Awesome, we're obsessed! Photo credit: Cliff Bostock. 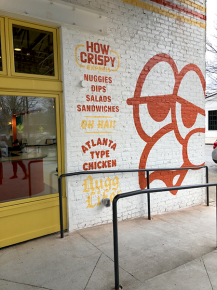 ATLANTA TYPE CHICKEN: She's sad or drunk or maybe both. Cheer her up. Eat her thighs. Photo credit: Cliff Bostock. 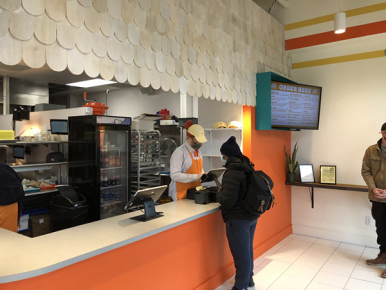 ORANGE YOU CRISPY: How Crispy's interior is little more than a counter, but stools are on the way and there's a patio outside. Popeyes is rumored to be suing for violation of its patent on orange paint. Photo Credit: Cliff Bostock.

There are three other chicken sandwiches on the menu — one with garlic-honey-butter sauce, one with tikka seasonings, and one with Buffalo sauce, which I tried on my second visit. It includes lemon-pepper seasonings along with “super ranch” dressing, “shrettuce,” and bread and butter pickles. I liked it better than the classic and even though it’s described as “wet,” the crunch was still there. That’s not the case at many restaurants. My only complaint: It’s not spicy enough for my mouth full of scar tissue.

There’s also an “herby chickpea patty” sandwich, a plate of six “nuggies,” a “big salad,” and four sides, including a “lil salad,” collards, mac & cheese, and yucca fries. I went for the collards…twice. I would happily quadruple the portion for an entire meal. Prices, by the way, are about the same as Hero’s, down the street — $9 for most sandwiches and $4 for sides.

As I was leaving the patio the first visit, I saw some noisy peckerhead and his chick devouring a pile of the food. I stopped and asked them how they liked it. He ran over to greet a bro and she told me that she “loved, loved, loved” it and had been lining up at popups for a year. She recommended the Buffalo version, which is why I returned. I think her very high opinion is most people’s and the owners are already planning a second, larger restaurant downtown, where they will likely serve fried chicken on the bone as well as in sandwiches. The place screams “Franchise!” 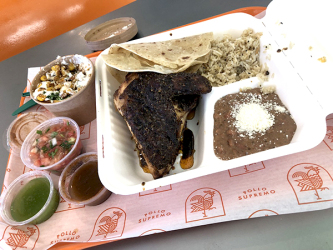 CHEAP, LIKE SINALOA: A quarter of a grilled chicken, tortillas, salsas, rice, beans, and pico de gallo will cost you $8. Add esquites for $4 more. Grab a margarita or a beer but don't bother to wait for a mariachi band. Photo credit: Cliff Bostock. 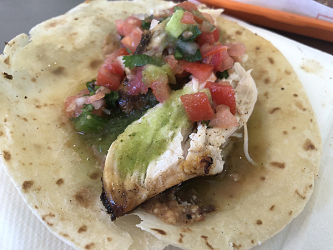 THIS IS VERY SINALOA: Smear some beans on a tortilla, add a hunk of chicken, some pico, and salsa verde. Guac is also available. Photo credit: Cliff Bostock. 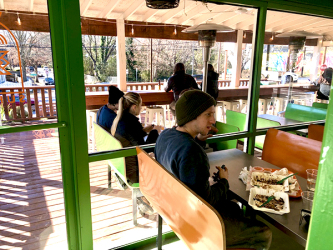 PARTY LIKE IT'S SINALOA: Pollo Supremo includes a few booths inside and a large patio for acting the fool while you consume margaritas, beer, and whole chickens. Hey, you can buy two whole chickens with all the sides for $45. Party but BYOP (bring your own pinata). Photo credit: Cliff Bostock.

By the way, although co-owner Greg Best has long been regarded as the city’s premier mixologist, there’s no booze at How Crispy, just soft drinks and “Atlanta type chicken,” as an outdoor mural says. It is illustrated with a chicken face with drooping eyelids, who might appear drunk. You can do that across the street at Halfway Crooks.

Do you prefer your chicken grilled? Then head to the new Pollo Supremo in East Atlanta, the latest project of chefs Duane Kulers and Nhan Le, who own Supremo Taco in nearby Grant Park. What’s so supremo about the pollo here? These lucky chickens are spatchcocked (butterflied) and grilled in the style of roadside chefs of Sinaloa, a province of northern Mexico. The chicken there features fairly heavy citric flavors combined with chiles.
The menu is simple. You order a quarter, a half, or whole bird alone for $5 to $18. You can add tortillas, rice, beans, pico de gallo, and salsas for a few dollars more. I ordered a quarter plus another side, esquites, and the same churros they sell at the taqueria. The chicken, grilled a little blacker than I remember eating in Mexico, is spiked with moritas, dried and smoked jalapenos. Like a fresh jalapeno, the morita’s burn can be really mild to fairly scorching. I encountered no heat at all but the red salsa did add a nice burn. The green was perfect — sour and bracing. I tore hunks of the chicken from the bone and placed them in tortillas with the beans, pico, and salsa. Que rico!

Although the beans had deep flavor, the rice was nondescript. That seems to be usual everywhere. Does so-called Mexican rice serve any purpose other than filling space on a plate? I actually liked that this wasn’t the usual bright yellow stuff, but it was extremely dry. My handmade tacos refused to include it. There’s also guac and classic chicken soup available. 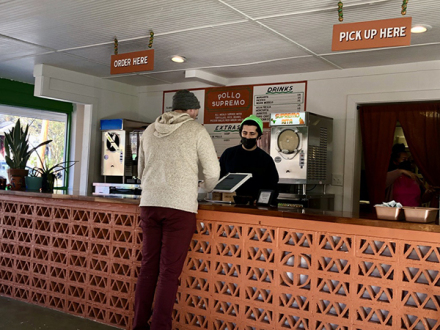 IN SINALOA THE MEN ARE BIG AND THE CHICKENS ARE FIERCE: Order at the counter, wait a few secs, grab those two whole chickens, stuff 'em in your pockets, and head home to your hungry familia. Photo credit: Cliff Bostock. 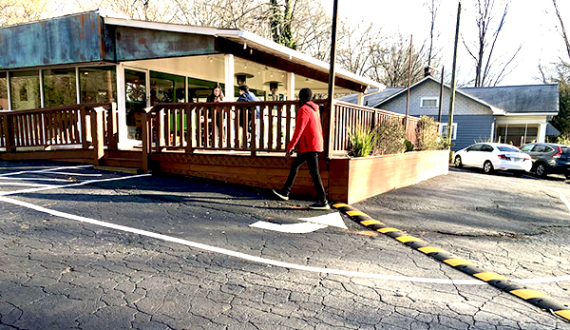 Esquites — corn off the cob with mayo, cheese, and some clippings of something — was off the mark slightly. I love the stuff. You can’t walk down a street in Mexico without being offered 10 cups of it. Supremo’s was a bit too thick and gooey for my taste. I took half of it home and gave it a few seconds in the microwave. That melted it down more to my liking. Yeah, I’m being too picky. I did love the churros. I love them so much I ordered them again the next week at Supremo Taco. I wish they had a caramel sauce for dipping them. I use fig butter at home.

Pollo Supremo has a few booths inside and a large patio. It was open barely two weeks when I visited and there was a steady stream of customers. I have no doubt it will be a hit. Margaritas are available. Gracias a dios, I did not hear or see a mariachi band. I hear Covid killed them everywhere. —CL—

Popeyes, they’re everywhere, popeyes.com, @popeyes. Avoid the sandwich unless right out of the fryer and enjoy the chicken pieces; check online for great coupons.