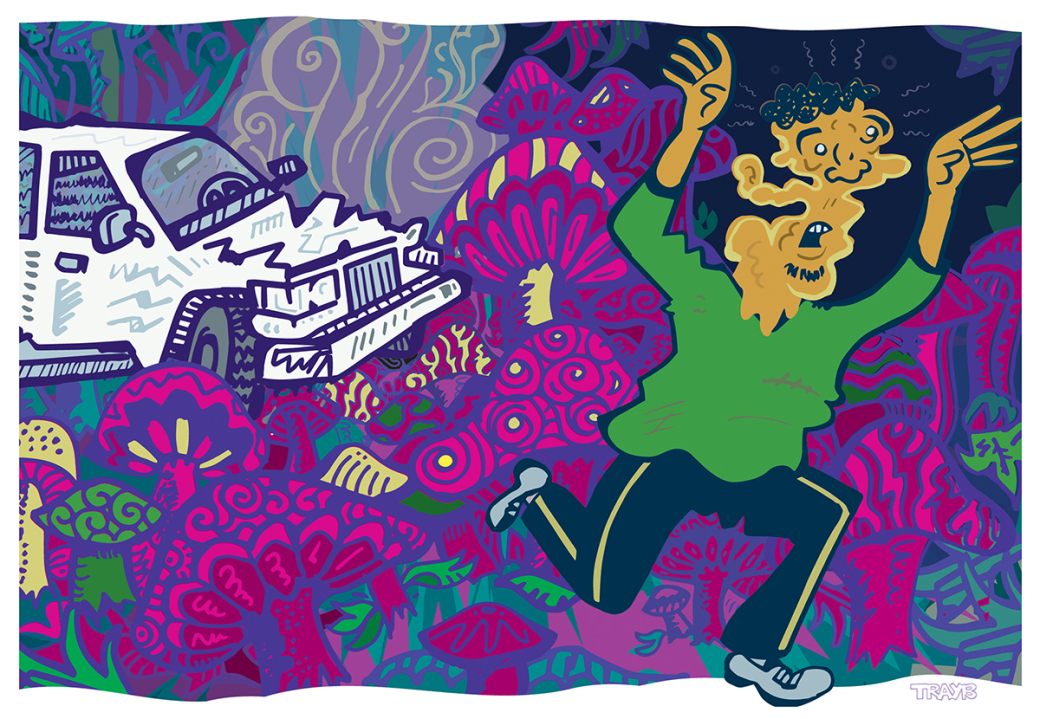 A Georgia man says he was flying high on psychedelic mushrooms when he went airborne in his parents’ white Cadillac — airborne, that’s right, — and landed at a Kennesaw gas station.

His zany driving style stunned a small crowd gathered at the gas station.

Video shows the 23-year-old speeding up just before slamming the white Caddy Deville into an embankment, sending the car soaring airborne for several seconds — and narrowly avoiding a gas pump when landing. Then, the driver gets out of the Caddy and runs into the gas station.

Police officers showed up to investigate. The 23-year-old told cops that he believed he was being followed by assassins, although he couldn’t describe the so-called assassins’ or their (imaginary?) vehicle. The driver was “displaying erratic behavior such as jittering movements, and speaking incoherently,” according to an incident report.

The 23-year-old voluntarily told authorities he was tripping on six magic mushrooms. A witness at the gas station who interacted with the man before the crash said the man was behaving oddly and “seemed ‘out of it,’’ police told the Macon Telegraph.

Cops charged the 23-year-old, who is now facing charges of driving under the influence of drugs. Cops took him to a hospital for an evaluation before heading to the Acworth County jail.

Apparently, the chase began when officers spotted the man allegedly trying to break into cars on Ashford-Dunwoody Road. When the man spotted police, he took off toward Perimeter Mall, where an officer cornered him near the trash compactors outside The Cheesecake Factory.

“Realizing he had nowhere to run, the suspect then climbed the trash compactor and pipes that ran along the exterior wall,” police said on social media. The man kept climbing all the way to the Cheesecake Factory roof — the highest point available. That’s when he ran out of things to scale. So the man and tried to hide on the Cheesecake Factory roof. But cops found him.

“Officials said the man emerged from his hiding spot and asked for help getting down off the roof,” the AJC reported. “Police called in the DeKalb County Fire Rescue Department, which used an aerial ladder on one of its fire engines to escort the man down.”
The man was arrested seconds after reaching the ground.
“Sorry Mr. wannabe Spider-Man, you didn’t think this one through,” department officials told the AJC.

A Fulton County Jail employee is on the run after allegedly trying to smuggle large amounts of drugs into the jail. And apparently, she was quite high.

Investigators said the 24-year-old jail medical assistant showed up reeking of marijuana before her Saturday work shift. She approached the jail security station, which is standard protocol for all who enter the jail, including employees. The deputy on security duty noticed the strong scent of marijuana emitting from the 24-year-old’s body “The deputy engaged the woman in conversation, and she revealed that she had smoked marijuana before coming to work,” reported WSB-TV.

Before the deputy could scan her belongings, the jail employee suddenly insisted that she needed to return to her car. Immediately. In a panic, the employee left her belongings behind as she ran out the door and sprinted to her car.
Jail authorities searched the employee’s bag and found 192 grams of marijuana, 20 grams of suspected crack cocaine, 200 cigarettes  (illegal contraband in jail) and loose tobacco.

An Augusta, Ga. teen is accused of sending a SWAT team to another teen’s home in Cherokee County — and telling police that the teen killed his mother.

Apparently, the whole thing is revenge for some teenage online gaming conflict.

Police said the teen also threatened to kill his sisters and kill him. Turns out, the whole thing was just a prank call, also known as “swatting.”

Here’s how it works. When police get calls from people reporting that kind of violence, they generally send in a SWAT team. Why? In case there’s a standoff.

In this case, 30 officers from Cherokee County police responded to the call. The SWAT team went to the front door, ready for a possible confrontation. The sleepy homeowner answered the front door, “Someone, the homeowner, came out the front door, looking confused,” Cherokee police told WSB-TV. “Things weren’t adding up to what was described in the call and what was happening in the house. And then, we quickly realized it was a swatting call.”

So investigators traced the call to the teen in Augusta, Ga. This same teen is allegedly linked to “swatting” calls in several other states, regarding conflicts with other teen gamers.

Cherokee County police told WSB-TV, the teen suspect “also made calls to North Carolina, Connecticut and Florida. Two of those calls actually resulted in the swat team kicking the door down.”

Hanging on the telephone

The callers are threatening people with arrest if they don’t make immediate payments over the phone regarding bench warrants. The scam has a brand-new twist: Callers are “spoofing” the actual phone numbers of law enforcement agencies and use the actual names of APD command staffers. This means “when scammers spoof a phone number, the number and caller ID appears on the recipient’s phone as if the call is coming from a legitimate source,” according to the Atlanta Journal-Constitution.
So wise up, Atlanta. Cops aren’t gonna call you about a bench warrant. Ever. You’d get an in-person visit for that one. So don’t fall for this “pay up” scam.

This Atlanta cop wins the “no good deed goes unpunished” award of the month.

In west Atlanta, a police officer noticed someone asleep at the wheel inside a white Toyota 4Runner stopped on James Jackson Parkway.

“The officer allegedly tried to wake the sleeping driver, to no avail,” reported Fox5Atlanta. Next, the cop used his baton to smash the rear window and turn off the car’s engine. But the car wasn’t in “park” position, so with the engine turned off, the Toyota 4Runner rolled into the officer, pinning him between the Toyota 4Runner and his own patrol car.

The officer’s ankle was hurt. Apparently, he’ll be OK: He was in stable condition at Grady Hospital after being treated for his ankle injury. —CL—