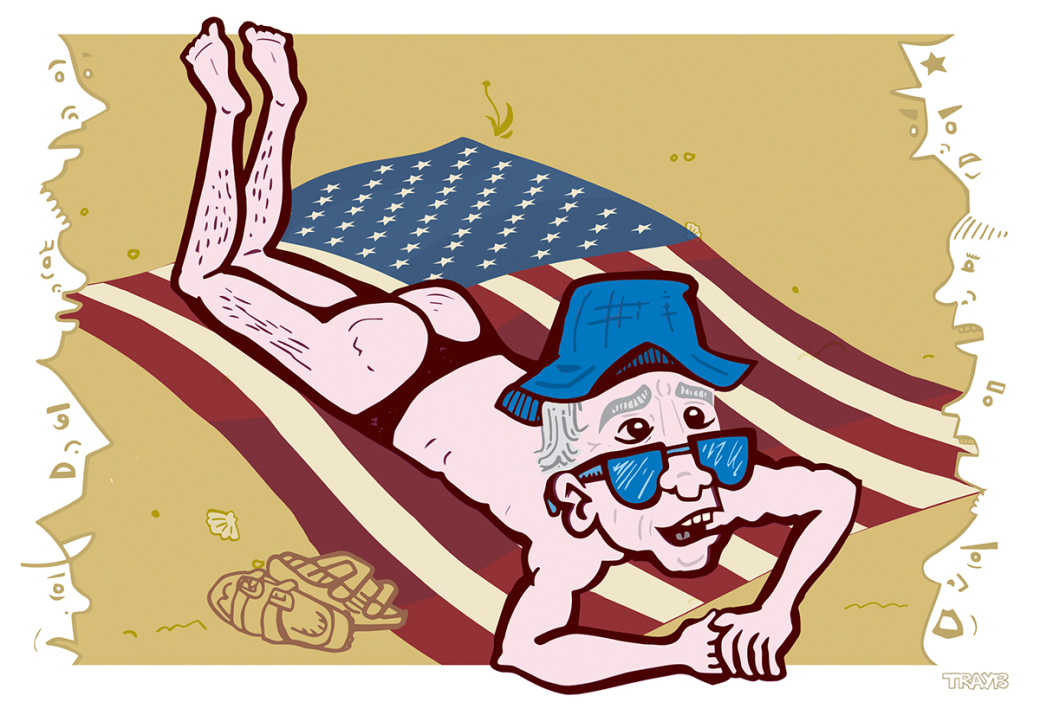 A man running as a candidate for Athens-Clarke County mayor was arrested for public indecency — just a few weeks before Election Day.
—
Fred Moorman was catching some rays on a St. Simons Island beach when he was charged with indecent exposure.
The 64-year-old Moorman said he was in a secluded beach area when he decided to “uncover my buttocks” — and someone called the cops.

Moorman defended his actions to the Athens Banner-Herald newspaper — comparing himself to a woman wearing a thong bathing suit. “[Women] are able to walk around with small coverings… and I think to treat a man as [cops] did treat me, I think, is a bit preposterous and unnecessary.”

Moorman was released from Glynn County Jail on a $1,256 bond.

Just 17 days later, voters cast their ballots in the Athens-Clarke County mayoral race. Moorman, a local landlord and former dermatologist, finished with just 3% of the vote.

Moorman’s cheeky scandal got a funny mention during the winner’s victory speech.

Winner and incumbent Mayor Kelly Girtz said being in a race with several candidates made him think carefully about how he would respond or react to their actions “even when they drop their drawers.” According to the Red and Black newspaper, the Girtz joke was met with “hollers and claps from the crowd. One member of the audience shouted, ‘Show us your buttocks!’“

Mayor GIrtz replied, “It’s not in my skillset, really.”


A 45-year-old woman lived with the dead body of her 82-year-old fiancée for at least two months in Gainesville, Ga.

In June, the 82-year-old man’s stepdaughter called the Hall County Sheriff’s Office and said she was worried because hadn’t heard from him in several months. She wanted to file a missing persons report.

Sheriff’s deputies responded by performing a wellness check at the 82-year-old man’s home on Candler Road in Gainesville, Ga. That’s where they discovered his rotting, dead body and the 45-year-old woman, who said her fiancée passed away in the first week of April.

“She’d been living with the body ever since, according to what our investigators determined,” the Hall County Sheriff’s Office spokeswoman told Fox5Atlanta.

An autopsy revealed the 82-year-old man was killed in a homicide due blunt and sharp force trauma, according to the Atlanta Journal-Constitution.

Investigators interviewed the 45-year-old woman for several days — and she’s now accused of murdering the man she was engaged to marry and concealing his death.
Her motive remains a mystery.

Apparently, this isn’t the woman’s first brush with the law — she’s faced previous felony drug charges and liquor law violations.
A Gainesville neighbor told Fox5Atlanta, “What is a 45-year-old woman doing with an 82-year-old man to start with?”


An 18-year-old is behind bars after allegedly making terroristic threats on social media to kill Fulton County Fulton County Sheriff Patrick Labat and his wife — unless Atlanta rapper Young Thug is released from jail.

Young Thug was arrested in Buckhead in May. Prosecutors believe Young Thug is a co-founder and ringleader of the Young Slime Life street gang, better known as YSL. The alleged YSL gang activities range from drug dealing to murder.

“It was not a smart move to threaten the sheriff. We think it’s gang-related and at least fan-base related.” Sheriff Labat told CBS46Atlanta, adding that it’s unclear whether the 18-year-old is part of the YSL gang or a fan.

The teen is also accused of threatening to kill the Atlanta Public Schools police chief Ronald Applin, who says “I couldn’t think of any particular reason why I was targeted.”

The 18-year-old is facing 23 counts of terroristic threats — all of which are felonies. His bond was denied.


A rare Republican-against-Fox-News fight is erupting in Georgia.

Johnson claims Fox conspired with first-place winner Jeremy Hunt, a 28-year-old Black Republican who was a frequent Fox guest before announcing his candidacy. According to the AJC, Johnson’s lawsuit accuses Fox News and Hunt of racketeering allegations, ignoring federal election regulations, and working together in an effort to get Hunt elected in the rural southwest Georgia district.

For example, Johnson complained about Hunt’s February appearance on Fox Business Channel. Hunt spoke while an effusive news banner flashed his name and the headline: “Going Back to an ‘America First’ Approach.”

Fox Business host Larry Kudlow said, “It’s a terrific message, Jeremy. I hope you do fabulously well in your race.”

WRLB-TV reported that Johnson complained in writing to Fox News Channel’s CEO throughout the primary, claiming Hunt was getting unfair and unequal airtime and using it to promote himself and raise money for his campaign.
Nothing changed — and Fox News kept inviting Hunt for cushy interviews that “morph into political advertisements that morph into fundraising, nothing short of a telethon,” Johnson told the AJC. Johnson hopes that by getting the courts involved, the Federal Communications Commission will be forced to enforce “equal time” rules already in place for news media interviews with political candidates.

Hunt, a former Army Captain, is trying to unseat a Black

Democrat, the 30-year incumbent Rep. Sanford Bishop.
Hunt told WMGT-TV, “It’s just ridiculous that we have Republicans suing other Republicans because they came in third place.”


A former Georgia cop essentially got a “Get Out of Jail Free” card for his participation the Jan. 6th Capitol insurrection in Washington, DC. This despite the ex-cop’s Facebook comments boasting that he tore down police barricades, which helped other rioters enter the Capitol building.

60-year-old Michael Daughtry told a judge that “very few things on Facebook are true. There’s actually was no fencing in the area that I was able to tear down.” But prosecutors showed photos of the police barricades from Daughtry’s Facebook account.

The judge sentenced Daughtry to three years of probation. Before the Jan. 6th insurrection attempt, Daughtry was selling AR-15s and ammunition out of his home, according to the AJC.

Also, he spent 20 years working as a police officer in the southwest towns of Pelham and Camilla, GA. — but he was fired days after the 2020 presidential election, in part, over his “concerning Facebook posts” regarding his firearms business, according to the AJC’s reporting on court documents. “Some of those posts suggested customers should arm themselves ahead of the 2020 presidential election,” the AJC noted.

Daughter pleaded guilty to one misdemeanor count of entering a restricted area of the U.S. Capitol grounds. In exchange, prosecutors dropped two other misdemeanor charges. —CL—