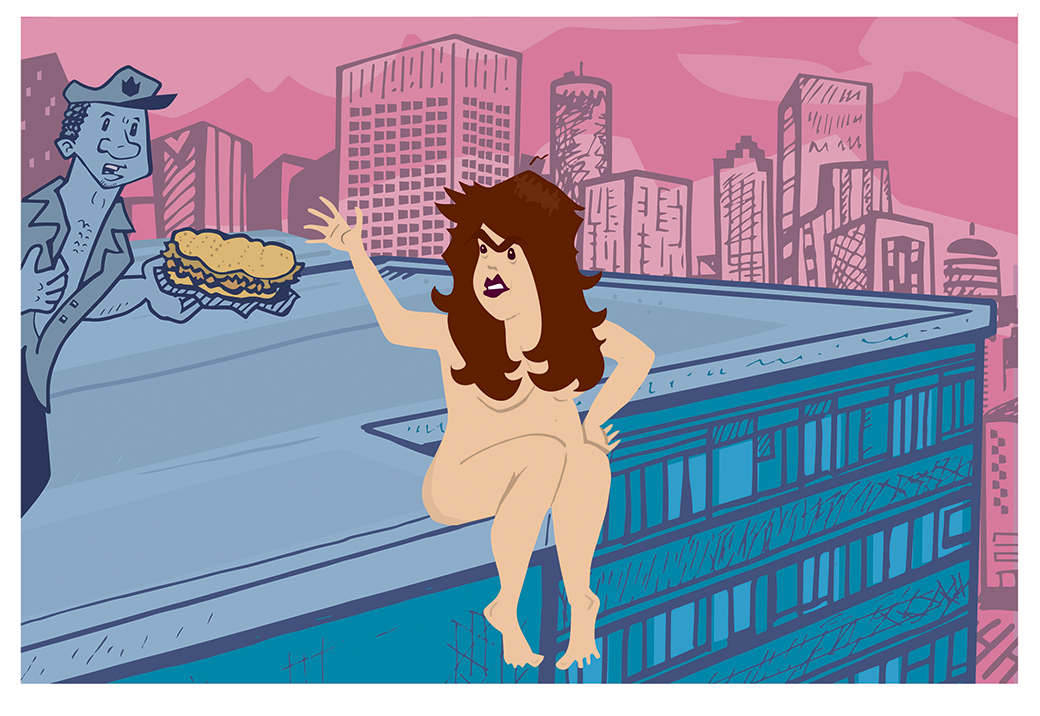 A Fulton County Deputy was headed home after work — when he heard a radio call about a woman in distress atop the Fulton County Courthouse in downtown Atlanta.

The woman — in her 30s — was completely naked, irritated, and yelling in Portuguese from the hot rooftop. Drone video shows the woman sitting on the ledge, with her legs dangling over the side of the nine-story courthouse.

Police were concerned that the woman might try to jump off the courthouse. Quickly, it became clear that the woman did not speak enough English to communicate with those trying to help her.

Police and firefighters closed nearby streets and locked down the courthouse. They found a bystander woman who speaks Spanish, which they hoped would be close enough to make a meaningful connection to the woman screaming in Portuguese on the rooftop.

"She told me she didn’t speak a lot of Spanish, but we were able to communicate a little bit since some words sound the same in Portuguese in Spanish and I tried to calm her down," said the female bystander, who is working on her master’s degree in criminal justice at Georgia State University. The bystander told Fox5News: "When she saw that I had a sandwich, she asked me to throw it at her, but not get too close, just to throw it at her, and I kept talking to her, and trying to calm her down.”

At this point, the male Fulton Deputy appeared on the rooftop to try to defuse the situation. The screaming woman demanded that the deputy remove his shirt, his safety vest and his weapon. He complied. Then, the screaming woman handed over the sandwich — and told the deputy to scarf it down.

"She said I had 60 seconds to eat it, and I was just trying to build her confidence, so I ate it quickly,” the deputy told Fox5News. Because she was naked, I could see that she did not have a weapon, so as she reached for my vest that I had already taken off, that’s when I knew I could reach for her and the other deputies came in behind me to pull her from the ledge. I was relieved when it was over, but really it just comes down to staying calm and have good training,” the Fulton Deputy told Fox5News.

The screaming woman was not listed on the courthouse docket for any hearings that day. It’s unclear why she chose to go to the Fulton courthouse.


A pizza employee showed up for work around 9 a.m. at a suburban pizzeria in Lithonia. Suddenly, the employee heard a man’s voice screaming for help — and the man’s voice appeared to be coming from inside the pizza oven.

The employee ran outside and looked behind the pizzeria and on the rooftop. No one was there.

The man’s screams were so loud that a female U.S. Army recruiter could hear him yelling from the recruiting office adjacent to the pizzeria in the strip mall.

Apparently, the suspect had crawled into the pizza oven’s exhaust vent on the roof overnight…and got stuck as he tried to shimmy his way down to the oven. The suspect was planning to rob the pizzeria.

Firefighters and police showed up. It took the rescue crew over 1.5 hours to figure out how to extract the skinny male suspect from the pizza oven vent. Firefighters had to cut away the sheet metal vent, while standing on top of the pizza oven.

Finally, they sliced through the vent and extracted the skinny male suspect, who complained of dehydration and friction burns on his arms from where he slid down the shaft. He seemed pretty ok — and was able to walk to an ambulance shortly after being removed, and went to a hospital for a standard checkup.

“I’m not sure what time the restaurant closes at night but the oven still gives off heat after they close I imagine,” a DeKalb County fire captain told WXIA-TV. “For him to get down into the pipe...he had to do it in a certain window of time when the oven was cool enough and obviously nobody was there.”

And the pizzeria? Closed for a while. Firefighters had to tear apart the oven vent to rescue the man, so the pizza oven must be replaced and inspected before they can start making pizza again.


A police officer tracked down a stolen car at a gas station on the outskirts of Savannah.

Cops surrounded the area to search for the male suspect, described as a thin dark-haired guy wearing khaki shorts and a white T-shirt. As this was occurring, 911 operators started getting multiple phone calls about a suspicious person running through homeowners’ backyards in the Al Henderson Golf Course Community — and occasionally climbing fences. According to one caller, the suspect entered their home via the back door and said he wasn't going to hurt them, and he didn't want to steal anything — he just needed a place to hide. The suspect took a single can of Coca-Cola from the caller’s refrigerator — and left.

Other 911 callers described the skinny man running across a golf course around the same time police units were arriving on scene. Cops exited their patrol cars and yelled commands for the male suspect to halt and stop.

That’s when the male suspect jumped into a pond on the golf course and swam out to the middle area. In a matter of seconds, cops realized there were several alligators swimming in the pond — and told the suspect that he was now in immediate physical danger.

The suspect responded by saying he'd rather get eaten by alligators rather than go back to prison. One of the larger alligators started circling the suspect, who still refused to come ashore.

An officer with a rifle fired a "less than lethal bean bag" shot toward the alligator's snout in an attempt to scare the circling gator away from the suspect. It worked, but just temporarily. A police helicopter arrived on scene, which served a two-fold role: The air action of the rotors seemed to keep the alligator from continuing its approach; and a rope with harness was lowered to the suspect — the idea was to pull him to safety.

The suspect stayed in the gator-infested pond for about an hour. Finally, two Chatham County police officers dove into pond in order to subdue the suspect and drag him to safety.
“Officials confirmed the man threatened suicide by alligator during the incident,” reported WGCL.

Cops took the suspect to a nearby hospital to get checked out — he’s fine. The Chatham County Police Department reported: “Neither the suspect, officers, or innocent bystanders were injured during the incident. The alligators were also unharmed.”


A decapitated dead goat was found hogtied, with a slit throat on the banks of the Chattahoochee River in Johns Creek. Two men discovered the dead goat. “First it started with the smell,” Mike Garcia told Channel2 Action News. “When I realized it had been hog tied and its throat was slit that’s when I was like, ‘Ok, that’s wild.’”

The dead goat was found near the recreation area, where crowds of people fish and jump in the water. Apparently, the dead goat is part of an ongoing trend. Chattahoochee River Keeper Jason Ulseth told Channel 2. “I’ve found 200-300 dead goats over the past couple years. Last summer, Ulseth showed dozens of dead goats floating in river to a Channel 2 reporter.

Ulseth said most of the previous headless dead goats he’s found were in South Atlanta, below I-20 and far away from recreation areas on the river. He’s super concerned about the new dead goat found further upstream — and so close to the Johns Creek recreation area, where more than a million people jump into the river each year. He said, “This could become a serious health hazard if we keep finding these.”


Four people were arrested in connection with a bunch of celebrity home invasions in Sandy Springs. Victims include players for the Atlanta Falcons and Atlanta United, rapper Gunna; a leading lacrosse player and a “Real Housewives of Atlanta” cast member, police told the Atlanta Journal-Constitution.

The four suspects were allegedly targeting a home occupied by the mother of one of rapper Future’s children. A police sergeant said the gang is linked to 15 home invasions or burglaries in Sandy Springs since October and is suspected in other incidents.

In early July, “The Real Housewives of Atlanta” star Marlo Hampton said she watched on her security system as armed, masked men kicked down her door.

“When I heard the boom, when I heard my nephew scream — and I knew that scream was a scream of fear — my heart dropped,” Hampton told Channel 2 Action News. Hampton said she went to her panic room and called 911. Then, the suspects who kicked her door in fled — perhaps because she yelled.

Hampton said the suspects ran away, after they heard yelling inside the reality TV-star’s home. “I want everyone to be aware if you are posting (on social media), if you do have luxury items, be careful,” Hampton told Channel 2 Action News.

Police are still looking for other gang-members linked to the home invasions. The alleged gang ringleader — a man with a red falcon tattoo near his right eye. —CL—