ABOUT TOWN: Fall season kicks off on stage 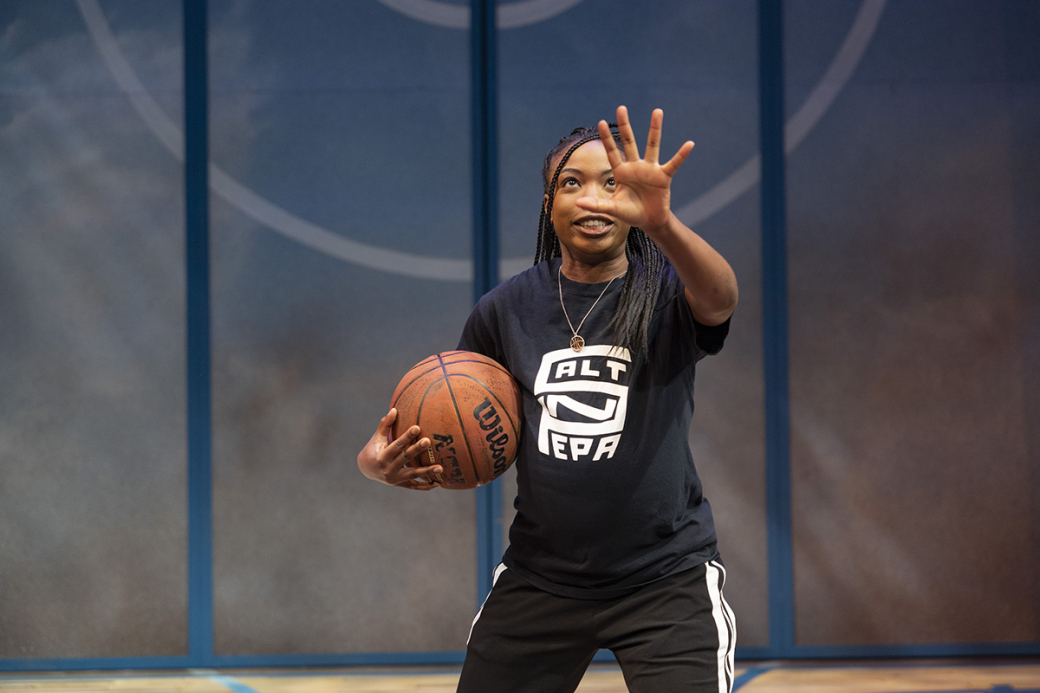 An interesting mix of works is underway on theater stages across the city. A prostitute makes good; a couple of plays written centuries ago get updated; working class struggles of the 1960s in the south get exposed; a political activist navigates fatherhood; and a ridiculous comedy pokes fun at nuns.


Flex, Balzer Theater at Herren’s — Theatrical Outfit is launching its 2022-23 season with the premiere of Candrice Jones’ play “Flex” that producers say explores the joys and challenges of teenage life with swagger and determination. “The word ‘flex’ describes a basketball play in which a series of tight, coordinated passes set up a chance to score,” says Artistic Director Matt Torney. He explained the production, set in the 1990s, blends precise movement with powerful visual storytelling and rhythmic dialogue, adding, “From uncertainty around the repeal of Roe v. Wade to Brittney Griner (and) pay inequity in sports, the challenges faced in this play feel very familiar indeed.” Diana Burbano of New Play Exchange called the work a “brilliant, beautiful examination of the lives of young Black women.” The director is Patdro Harris, a 40-year veteran of the stage with a string of credits to his name.
Ticket prices at box office. Balzer Theater at Herren’s, 84 Luckie Street, Atlanta 30303. 678-528-1500 theatricaloutfit.org #theatricaloutfit 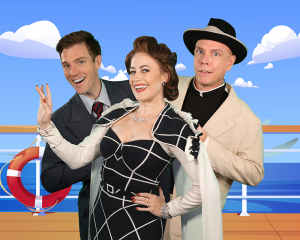 ANYTHING GOES: MORE STANDARDS THAN YOU CAN SHAKE A STICK AT. Photo credit: Mason Wood

Anything Goes, City Springs Theatre Company — The season at City Springs sets sail with Cole Porter’s classic “Anything Goes,” which debuted to considerable fanfare during the Great Depression of the 1930s. The title song and others from the musical such as “I Get a Kick Out of You,” “All Through the Night” and “You're the Top” made Ethel Merman a Broadway star and have since become standards. This “timeless, zany shipboard musical comedy” is directed and choreographed by Sara Edwards and features Mamie Parris as Reno Sweeney, Billy Harrigan Tighe as Billy Crocker, and Jamie LaVerdiere as Lord Evelyn Oakleigh. “What better way to begin our fifth season in Sandy Springs than with this spectacular show that has won six Tony awards as well as the 2011 Drama Desk Awards for Best Revival, Best Choreography, and Best Actress, and the 1987 Outer Critic’s Drama Award and Drama Desk Award for Best Revival,” says City Springs executive Natalie DeLancey.
$37 - $120. Byers Theatre, Sandy Springs Performing Arts Center, 1 Galambos Way, Sandy Springs 30328. 404-477-4365 cityspringstheatre.com @CSpringsTheatre 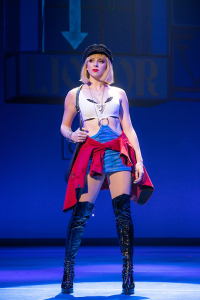 Pretty Woman: The Musical, Fox Theatre — Pretty Woman gets the musical treatment in director and choreographer Jerry Mitchell’s adaptation of the 1990 hit flick that starred heartthrob Richard Gere and then-emerging Smyrna actress Julia Roberts. Mitchell is known as the Broadway creator of “Hairspray,” “Kinky Boots” and “Legally Blonde,” winning a slew of awards in the process. Rocker Bryan Adams and his composing partner Jim Vallance wrote the original score based on the script by Hollywood heavyweights Garry Marshall and J.F. Lawton. Initial reviews of its Broadway opening in 2018 were tepid, but audiences responded favorably. Played in this production by Olivia Walli, Hollywood hooker Vivian Ward gets picked up by a rich businessman to be his escort at social functions for a week, during which their relationship evolves into something more salutary and potentially longer-lasting.
Ticket prices at box office. Fox Theatre, 660 Peachtree Street, Atlanta 30308. 855-285-8499 foxtheatre.evenue.net @PrettyWoman 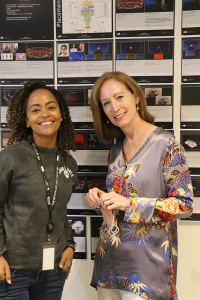 Everybody, Alliance Theatre — The season opener for the Alliance Theatre this time around is an “irreverent, rollicking, uproarious ride that asks big questions of all who see it,” the hype would have you believe. “Everybody” is the work of Pulitzer Prize finalist and Obie Award-winning playwright Branden Jacobs-Jenkins, described as “one of this country’s most original and illuminating writers” by The New York Times. His piece was inspired by the 15th century morality play “Everyman” and ponders the meaning of life from the cradle to the grave. Co-directed by Tinashe Kajese-Bolden and Susan V. Booth (in her final Alliance project), the staging of “Everybody” uses a singular conceit, which Jacobs-Jenkins explains thusly: "The concept...is that every night there’ll be a different Everyman, chosen by lottery, so the cast will shift a lot. This may be an insane idea. We’re assuming all these lovely actors are going to memorize the entire script.”
$25 - $78. Coca-Cola Stage at Alliance Theatre. 1280 Peachtree Street, Atlanta 30309. 404-733-4601 alliancetheatre.org @alliancetheatre 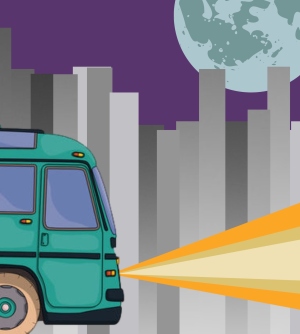 CAROLINE NO: WORKING FOR THE MAN IN 1963 LOUISIANA. Illustration credit: Jono Davis

Caroline, or Change, Jennie T. Anderson Theatre — The change in the title alludes to the coins that eight-year-old Noah leaves in his pockets to be taken by Caroline, a Black laundry woman toiling for a Jewish family in Lake Charles during the early 1960s. Oddly, she has been given permission to do so by Noah’s stepmother, who is unable - or unwilling - to give the servant a raise in pay. Caroline initially resists the idea, but her own children face crippling poverty and hunger. What ensues creates a different kind of change for all involved. The score combines spirituals, blues, Motown, classical, klezmer and folk. The music is by Jeanine Tesori and the book and lyrics are by Tony Kushner. The show ran both Off-Broadway and on Broadway as well as in London’s West End, where it won the Laurence Olivier Award for Best Musical.
Ticket prices at box office. Jennie T. Anderson Theatre, Cobb Civic Center Complex 548 S. Marietta Parkway, Marietta 30060. 770-528-8490 andersontheatre.org 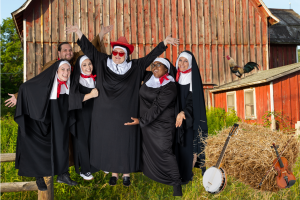 NUNS ON THE RUN: SISTERS ARE DOING IT FOR THEMSELVES. Photo credit: Blaine Clotfelter

Nunsense Jamboree, Lyric Studio — If you’re into Hee-Haw and Laugh-In, this “hilarious hoedown” is right up your alley. “Nunsense Jamboree” follows the aspirations of Sister Mary Amnesia to become a famous country singer. Her name comes from having been hit on the head by an errant crucifix, causing loss of memory. Her debut album, I Could’ve Gone to Nashville, has just been released and she is busy trying to promote it with the help of a motley assortment of characters. “Nunsense Jamboree” is the third in Dan Goggin's series of loony musicals involving women of the cloth and their escapades. The show takes place in real time at the venue in which it is being staged. Director Rachel Rudd says audiences are “sure to love the Grand Ole Opry feel of it. The cast has done a fabulous job of bringing these characters to life and can’t wait to bring our audiences laughter with a country music twist.”
$50. Lyric Studio, Marietta Theatre Company. 12 Powder Springs Street, Marietta, 30064. mariettatheatre.com 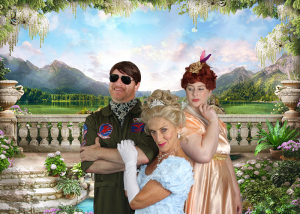 Top Gunnerton: The Maverick Who Loved Me, Petite Violette —Top Gun: Maverick is doing fairly brisk business in Atlanta, as is “The Queen's Ball: A Bridgerton Experience.” A spoof combining elements of both is running amok at Petite Violette as part of their Murder, Mystery, and Mayhem dinner theater series. According to director Katie Kneeland, the show “is a timely take on an era of cut-throat high society competition. With costumes from the Regency Era, the show will transport guests back in time while immersing them in a murder mystery for the ages.” The interactive show above the main restaurant is paired with a four-course dinner of French victuals included in the ticket price.
$75. Shows run Fri. - Sat. at 7:30 p.m. and are not recommended for kids under 10. Petite Violette, 2948 Clairmont Road, Atlanta, 30329. 404-634-6268 petitevioletterestaurant.com @PetiteViolettes 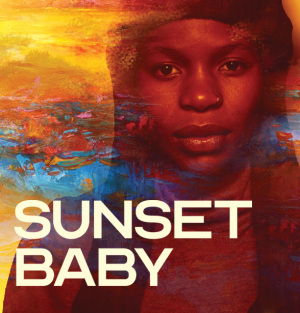 FATHERS AND DAUGHTERS: NEGOTIATING THE PAST AND PRESENT. Photo Courtesy Ali White

Sunset Baby, Actor’s Express — Kenyatta Shakur, a former activist and political prisoner, is now widowed and desperate to reconnect with his adult daughter Nina, who shuns him. She is refusing to let him have letters from his late wife that are said to have both personal and historical significance. “Nina is a smart and sexy hustler who has rejected everything her parents fought for in the Black liberation movement,” Playbill stated in 2015. “Negotiating her past and present becomes a revolutionary act. This dynamic play about fathers and daughters sears with wit and wisdom and the brutal politics of freedom.” The original book came out in 2012 through Bloomsbury Publishing; they described it as “an energized, vibrant and witty look at the point where the personal and political collide” and called author Dominique Morisseau, a MacArthur Grant recipient, “one of the most exciting and distinctive undiscovered voices in America.” In The Guardian, reviewer Lyn Gardner thought the play was “smart, entertaining and moving as it grapples with the tensions between past and present, one generation and another, while asking penetrating questions about the nature of liberation.”
''Ticket prices at box office. Actor’s Express, 887 West Marietta Street, Suite J-107, Atlanta 30318. 404-607-7469 actors-express.com @AExpress 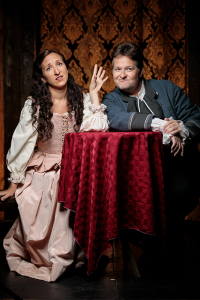 Much Ado About Nothing, Shakespeare Tavern Playhouse — The 2022-23 season at the Shakespeare Tavern opens with the comedy “Much Ado About Nothing” on Sep. 10. “Confirmed bachelor Benedick struggles to admit his love for the equally witty and equally independent Beatrice, while young lovers Claudio and Hero survive the devious meddling of others on their way to the altar,” the synopsis reminds us. Set in Messina on the isle of Sicily and first performed around 1600, its running themes involve deception, cuckoldry, spying and mistaken identity, all tied together with the ever-present banter and double-entendres. The lead couple is played by Jacklyn Hofmann Faircloth and her husband Nicholas Faircloth, who met and began courting while working at the Tavern. The play is directed by Andy Houchins, responsible for at least a dozen similar works over the years at the venue.
$15 General Admission Preview, Thu., Sep. 8. $20 General Admission Preview Fri., Sep. 9. Shows run Thu. - Sun. at 7:30 p.m. Shakespeare Tavern Playhouse, 499 Peachtree Street, Atlanta 30308. 404-874-5299 shakespearetavern.com @ShakespeareTav