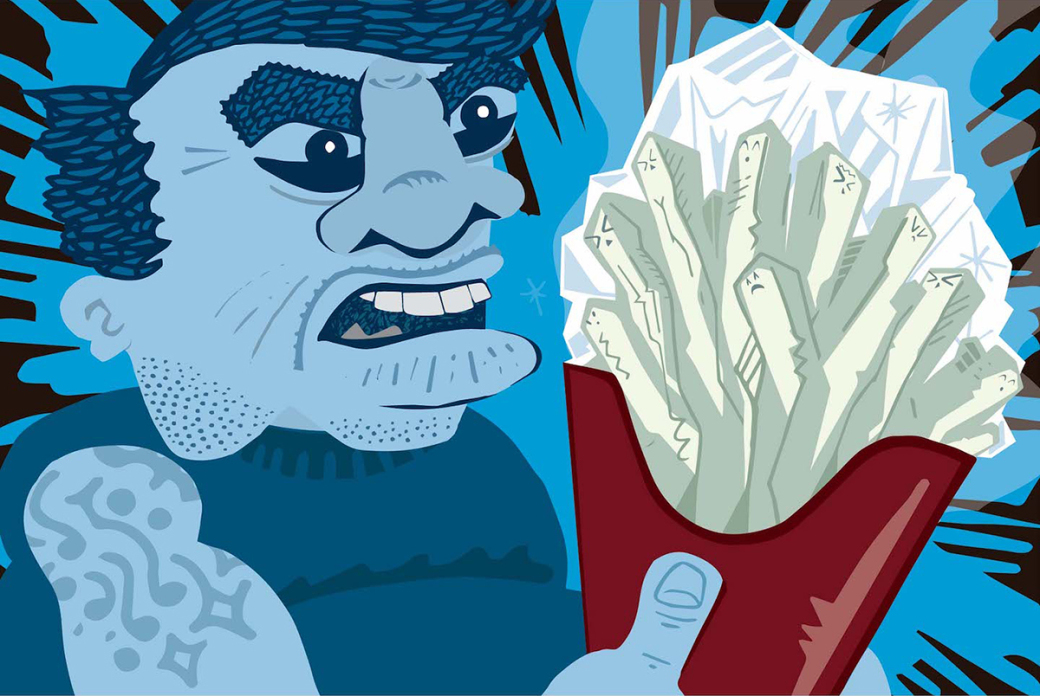 When police arrived at the McDonald’s, the irate man kept on complaining about his cold French fries. Apparently, the man conveniently forgot about his involvement in a murder four years ago. According to WSB-TV/Channel2, the same irate male customer is facing a 2018 murder charge for a woman found dead in a burning car — and the man never showed up in court to face the murder charge.

The conversation about cold French fries was caught on a police officer’s body-worn camera.

“They are lukewarm but they are not hot,” the irate man said to the cop. “I just asked if I could get some fresh fries.” The cop asked the irate male customer to fill out some paperwork for the trespassing ticket charge against him. The story might have ended right there — with a refund for the man’s lukewarm fries. But the cop ran a background check on the man’s ID.

“Well, you shouldn’t do that if you have a warrant out,” the cop replied. Immediately, the irate male customer took off running. The cop jumped into his patrol car and started chasing the man. “During the chase, Kennesaw dispatch tells the officer that (the irate man) has an active warrant for a failure to appear for a homicide in Fulton County,” reported WSBTV/Channel2. In 2018, the irate man was accused of driving a dead 21-year-old woman’s body into a Lawrenceville subdivision — and setting her body on fire. Why? A drug deal gone wrong. Apparently, the irate man was selling marijuana.

Back to the high-speed chase in Kennesaw — with cops pursuing the irate man. About 20 minutes later, the cops found the man in the parking lot of an apartment complex. They tased the man, who fell to the ground and was promptly arrested.

Get this: Kennesaw cops searched the irate man’s car outside the Mickey Dees — and found marijuana “ready to distribute.” The irate man went to jail, where he’ll be extradited to face that murder charge — along with trespassing and trying to flee police.

28-YEAR MANHUNT ENDS: Apparently, this murder warrant thang is not just an ATL occurrence. A routine traffic stop on US Highway 78 outside Athens led to the arrest of a murder suspect in a decades-old homicide. A sheriff’s deputy pulled over a car with suspended registration. The driver handed over his South Carolina driver’s license. The deputy noted that the SC license was suspended — and asked the driver why. The driver said he had no idea. The driver was arrested — and taken to the Oconee County Jail for fingerprinting. That’s when authorities realized the driver was a fugitive running from the law — who had been accused of shooting and killing a man at the Oakland MARTA station in Atlanta in 1994. Yup, shoulda kept that car registration current.

SHE FRAMED HERSELF: A 39-year-old Georgia woman will spend a year in jail for stealing more than $125,000 worth of eyeglasses from Warby Parker. She swiped 1,290 eyeglass frames by placing 258 online orders, paying for them with pre-paid debit cards that had little to no cash on them. The store offers a try at home type program, with a person’s credit card not charged if the frames are returned within a certain frame. Just another reason why so many people shop on the internet.

FAST FOOD FUMBLE: A Georgia woman named JoAnn Oliver went to a Kentucky Fried Chicken drive-thru on her lunch break — and ordered a KFC sandwich to go. Much to her surprise - when she opened her sandwich, she found a wad of cash inside. How much? Oh, more than $500.

The city of Jackson, Ga., police department wrote on its Facebook page: “(The woman) had gone to a local restaurant drive-through on her lunch break and returned to her office to enjoy her lunch. When she opened her lunch and removed her sandwich, she was surprised to find $543.10 in cash under her sandwich.”

Police said one of the KFC workers had accidentally put the fast-food restaurant’s daily deposit into the woman’s sandwich. The woman considered keeping some of the cash bonanza “for a second” — but ultimately chose not to keep any of it. Instead, she called authorities right away. Even though her husband has cancer and her family is facing $2 million in medical bills.

“Not only did Mrs. Oliver chose to do the right thing, but she saved the manager’s job,” police reported. “Mrs. Oliver, thank you for reminding us we have amazing Citizens in Jackson — and it’s people like you who make us great!”

So how did Kentucky Fried Chicken choose to reward this honest woman? KFC refunded her the price of her entire lunch — and gave her a free meal, according to WSB-TV.

Ummmm, nope. She returns $500 and they give her two free meals? That’s a first-class fast-food fumble.

BUXOM BABES ON THE RUN: Three very well-endowed boobalicous women are wanted in a bizarre ATL undies scam. Nope, they did not steal bras or ladies underwear. Instead, the trio is accused of stealing more than $6,000 worth of Nike Men’s Boxers from four different suburban Kohl’s stores. (A box of three Nike Men’s Boxes usually sells for about $40, according to Fox5Atlanta News.) The buxom trio did not dress to blend into a crowd. Surveiliance video shows the three female suspects: one wearing just a bra and a pair of jeans; a second woman wearing a bustier and sassy cut-off shorts; and a third woman wearing a tube top and jeans.

STRIPTEASE CRIME SPREE: In Savannah, Chatham County Police got a 911 call about a shirtless man obstructing traffic on President Street Extension, which is a four-lane divided highway. When cops arrived, most cars were stopped at a standstill. Police quickly learned that the shirtless suspect had already jumped onto a car's hood and smashed the windshield with his body weight. Then, the shirtless suspect broke the mirror off another car; and banged on the hood of a third car. Apparently, the shirtless suspect saw one driver getting out of his car and proceeded to jump in the driver’s seat — stealing the car and fleeing by driving on the wrong side of the four-lane highway.

The shirtless suspect collided with another car, and continued fleeing, eventually abandoning the stolen car near Hinckley Marina. He allegedly attempted to steal a sailboat but was apparently unable to figure out how to do so before police officers pulled up to the marina. In his effort to continue his escape, he removed the remainder of his clothing while on the dock and jumped nude into the Wilmington River. The naked man swam across the river to a marina on the other side where he attempted to steal another boat. An adjacent boat owner saw what was happening, so she pulled a pistol on the naked man and told him to stop what he was doing. Just then, officers arrived.

The naked man was arrested and booked on a total of 23 charges. While officers normally search suspects for weapons or contraband, the arresting officer wrote in his report: “I did not perform a search of (this particular suspect) because he was nude.”

SURPRISE SHOPPER: An unwelcome guest showed up and caused a ruckus at a Dollar Tree discount store in Augusta, Ga. The Dollar Tree manager called 911 in distress and told the operator, “There’s an alligator at my front door.” Indeed, the young 4-foot-long gator was just chilling out in the parking lot when wildlife animal authorities arrived. They measured and tagged the gator before releasing it into the wild. —CL—

The Blotter Diva compiles police reports from the Atlanta Police Department and local news reports — and puts them into her own words.