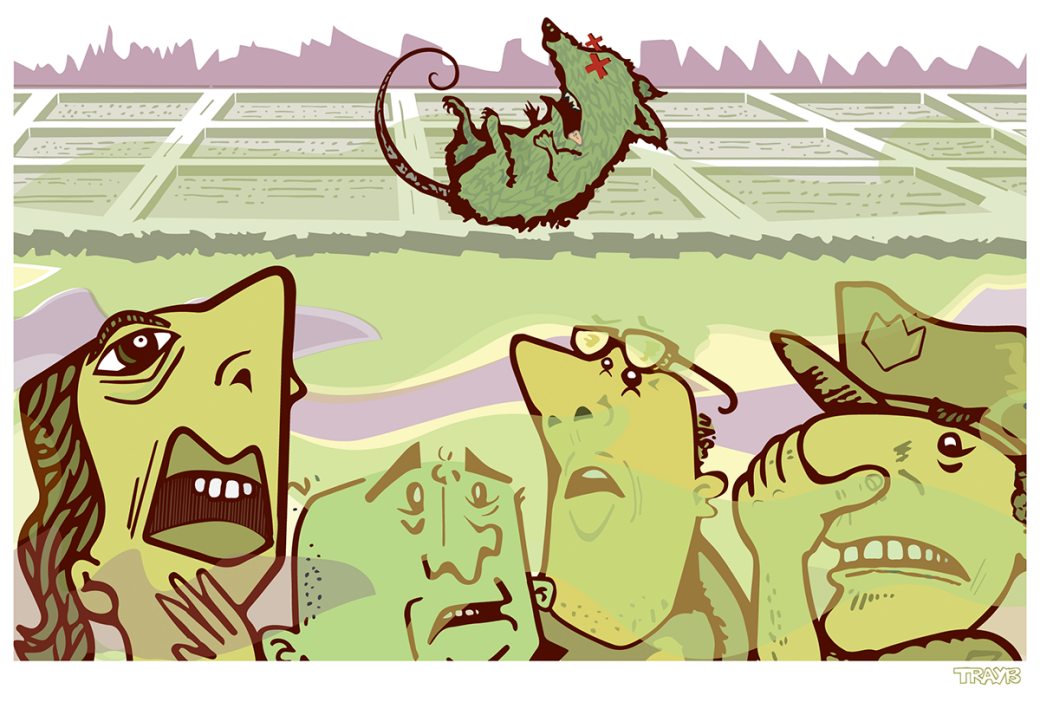 The Atlanta Police Department evacuated part of its office at Hartsfield-Jackson International Airport, due to a smelly problem.

What stunk? A dead rat in the ceiling. To be exact, a 3-pound dead rat that emitted a nasty smell throughout the office. That’s what Atlanta City Councilman Michael Bond told FOX5Atlanta.

This, after the city of Atlanta spent $1 million to renovate the Atlanta Police Precinct Office at the Airport.

Several Atlanta police officers told Fox5Atlanta that they’ve complained for months about the rodent infestation at the airport precinct. Those officers said they believe their workplace is unsafe for their personal health.

Councilman Bond added: “This in my estimation is an emergency”

A Georgia inmate masterminded one of the biggest heists ever pulled off from behind bars, while inside a U.S. prison. Even more startling, the inmate was in the “Special Management Unit,” a maximum-security prison designed to house Georgia’s most hardened criminals.

Get this: The 31-year-old Georgia inmate allegedly impersonated the identity of California billionaire movie mogul Sidney Kimmel to steal at least $11 million dollars in order to buy thousands of gold coins and a Buckhead mansion. Movie mogul Kimmel has produced high-profile movies such as “Crazy Rich Asians,” and “Moneyball.”

Apparently, inmate Arthur Lee Cofield used a contraband cell phones to call and convince customer service representatives at Charles Schwab that he was Kimmel and arranged for $11 million to be wired to Idaho for the purchase of 6,106 American Eagle one-ounce gold coins.

Next, Cofield allegedly hired a private plane to transport the gold coins to Atlanta, where the he allegedly used some of the money to buy a $4.4 million dollar Buckhead mansion, according to the Atlanta Journal-Constitution.

The AJC reports; “Cofield was a shrewd, intelligent individual who could con you out of millions,” said Jose Morales, warden of the Special Management Unit when Cofield was there.

The inmate did all this, while behind bars in Georgia’s “Special Management Unit” — a maximum-security prison designed to house Georgia’s worst criminals. He was transferred there after allegedly masterminding another crime while behind bars: the shooting death of a man now paralyzed from the waist down.

Cofield has pleaded not guilty to charges of money-laundering and conspiracy to commit bank fraud. Years ago, while serving time in a Georgia prison, Cofield formed his own gang called YAP (short for “young and paid”) and dubbed himself Yap Lavish. During this time, according to the AJC, Cofield focused his attention on his phone relationship with a young Atlanta woman. Even though they had never met in person, Cofield “arranged for her to have thousands of dollars in cash, a Mercedes and an apartment in a Buckhead high rise,” the AJC reported. Part of the deal: Cofield would watch the Atlanta woman have sex on FaceTime. He dubbed “her Yap Missus.”

Although federal authorities have only charged Cofield with scamming Kimmel, they believe it’s likely he stole millions in a similar fashion from other billionaires. Cofield has pleaded not guilty to charges of money laundering and conspiracy to commit bank fraud

A not-so-savvy football fan was arrested in Buckhead, while wearing the same NFL sweatshirt and other NFL gear that he allegedly just stole from the home of ex-Atlanta Falcons’ wide receiver Julio Jones.

The 31-year-old male suspect allegedly broke into Jones’ home on West Roxboro Road and stole various pieces of NFL clothing, a watch and Charles Barkely Nike Shoes all belonging to Jones. (Jones was in Florida at the time.)

“Officers were able to use the home’s security technology to see images of the suspect, then broadcast his physical description over the radio,” police told the Atlanta Journal-Constitution.

Moments later, an off-duty officer said he easily spotted the 31-year-old suspect running near Jones home and trying to elude swarms of police… all while still wearing that stolen NFL Julio Jones sweatshirt.

The suspect is now in Fulton County Jail, charged with two counts of first-degree burglary.

Julio Jones spent 10 seasons with the Atlanta Falcons; in 2019, Jones became the Falcons’ all-time career-receiving yards leader, with 12,896 yards and earning seven trips to the Pro Bowl, according to ESPN.

The Falcons traded Jones last year to the Tennessee Titans. Earlier this year, Jones signed with the Tampa Bay Buccaneers.

Police are investigating a bizarre wide-scale littering of hateful messages in a small town about 40 miles west of Atlanta. In late October, residents of Carrollton, Ga., told Fox5Atlanta that someone tossed hundreds of plastic baggies filled with corn kernels and anti-Jewish flyers into driveways, front lawns, and sidewalks across multiple neighborhoods.

“It’s weird,” said resident Michelle Bone, who found a corn-kernels-and-hateful-notes baggie in her driveway. ”I don’t even know what it means, what it’s about.”

A Jewish advocacy leader condemned the act and questioned the timing of the anti-semitic stunt. “We are in the midst of early voting for an upcoming election,” Dov Wilker, southeast director of the American Jewish Committee, told Fox5Atlanta. “We’ve seen them in northeast Georgia, northwest Georgia.”

Apparently, police eventually caught two people in the act of tossing corn-and-hate filled bags out of a car window. The passenger claimed they had thrown up to 600 baggies. No charges were filed because hateful language is protected by free speech. It’s unclear why the couple wasn’t charged with littering.

A grandmother is going to jail for selling and trafficking meth with her 2-year-old grandchild in the backseat of her car.

A confidential source told authorities that the grandmother was often spotted selling methamphetamine with her grandkids in the car near the Airport Mini Mart in Athens, Ga. So police started watching her. Under law enforcement surveillance, the grandmother and her 38-year-old male cohort went into the Lawrenceville apartment of a known meth supplier and a person associated with the Surenos street gang — and the grandma exited with a bag.

The grandmother allowed her male cohort to drive her car from Lawrenceville back to Athens. Eventually, Oconee County Sheriff’s deputies attempted to stop the car, but the male cohort started running red lights and speeding, prosecutors told the Atlanta Journal-Constitution.

At some point, the male cohort slowed the grandmother’s car down, jumped out and ran away. Granny moved to the driver’s side and stopped the car moments before her car likely would have crashed into a telephone pole. Her 2-year-old grandchild was still in the car’s backseat. Cops searched the car and found nearly 38 grams of meth and drug distribution supplies, including baggies and spoons. In late October, a federal jury convicted the grandmother of trafficking methamphetamine with the intention to distribute.

The 52-year-old grandmother could face up to 40 years in prison and a $5 million fine.

A Dunwoody man was handcuffed and nearly thrown in jail — for stealing his own car.

What triggered his near-arrest: The Dunwoody man forgetting to call police after he found his “stolen” car.

What actually happened: On a recent Friday, the Dunwoody man noticed his car was missing from the parking lot of the apartment complex where he lives. So the Dunwoody man called 911. Police flagged his car’s tag number as “stolen” in law enforcement computer systems, according to 11AliveNews.

So the Dunwoody man called the towing company and got his car back. But he forgot the most important thing.

You see where this is going, right?

Later Saturday, the Dunwoody man was driving down Winters Chapel Road, with a friend in his passenger seat. To his stunning surprise, police suddenly pulled over his car, and handcuffed the Dunwoody man and his friend, ready to arrest them for “stealing” the driver’s own car.

Dunwoody Police allowed the man to prove that he was the car’s rightful owner and eventually removed the man’s tags flagged as “stolen” from its system.

From the Dunwoody police Facebook page; "Moral of the story: If you ever report your vehicle stolen, always contact your local law enforcement agency if you locate the vehicle," Failure to do this will cause quite a scene when officers pull you over.” —CL—