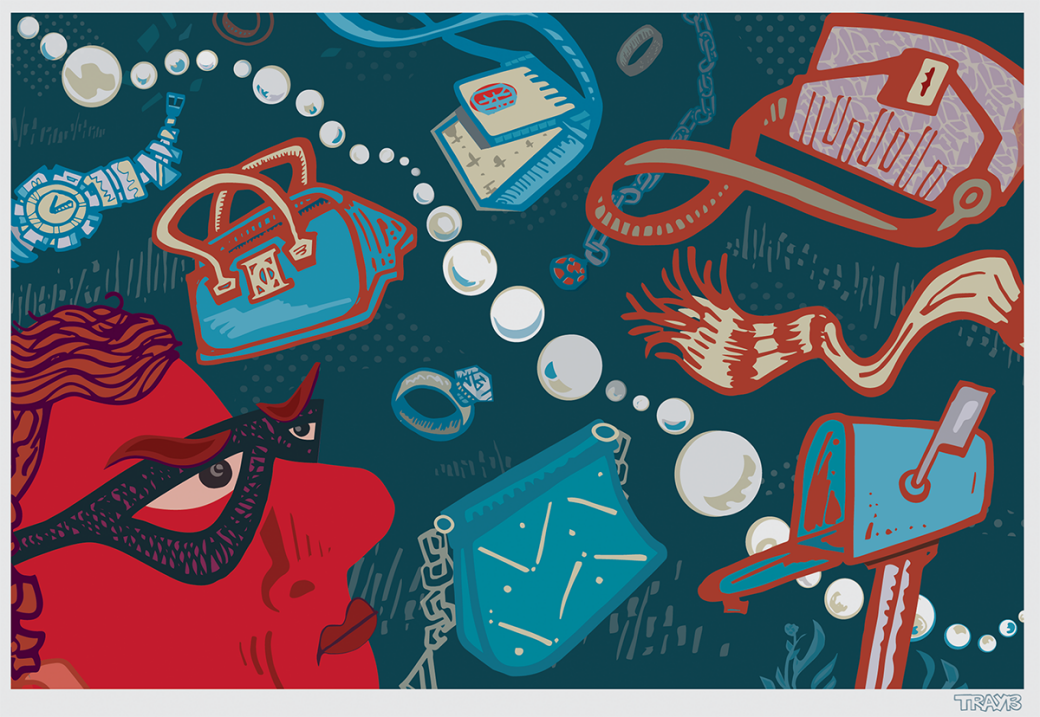 Cops in Sandy Springs are searching for an alleged lady burglar who is still at large — even after she made a bizarre return to the crime scene, which was caught on surveillance video. Initially, the female suspect targeted three homes near Riverview Road and Northside Drive, pretending to be a lady looking for odd jobs/work. Once inside the homes, the female suspect stole thousands of dollars of jewelry and handbags.

One homeowner victim tells Fox5 News that the lady burglar “went though multiple closets, multiple rooms” in broad daylight around 11 am.  Security cameras in homes captured images of the alleged lady burglar, which were turned over to Sandy Springs Police.

The homeowner victim believes the suspect brazenly returned some jewelry and purses  — just hours after Sandy Springs police started investigating the robberies. "The fact that these people were not afraid to come right back into the same neighborhood again with the items is bizarre, and it's also unsettling,"

Joke’s on you, buddy

A Georgia 18-year-old claims he was pulling a prank for a YouTube video when he donned a mask, hood and dark clothes and walked into a vape shop in Canton, pulled out a weapon and demanded specific items from the clerk.

According to the New York Post, surveillance video shows the 18-year-old suspect “pointing his weapon at the cashier and demanding he hand over certain products.”

Then, bizarrely, the 18-year-old bursts into laughter, whips off his mask to reveal his face and tells the rattled clerk he was just kidding around — the whole thing was a prank for a YouTube video.

“Yo, dude. That’s not funny,” the rattled clerk replied.

“Oh my God, bro. Oh my God, I got you,” the 18-year-old allegedly said — telling the clerk that the weapon was “just a freaking airsoft gun.” The 18-year-old then put the gun into his backpack, apologized and left the vape shop — without taking anything.

Cherokee County Sheriff’s officials posted a photo of the 18-year-old online — and asked the public for help in identifying him. The 18-year-old was arrested the next day at Woodstock High School.

According to detectives, the 18-year-old suspect said the whole vape store thing was a prank for a YouTube video. But detectives aren’t buying his story — and they don’t believe it was a social media prank.

“There’s no other person there with him, no one was videotaping him, he does not have a YouTube channel as he states, “ Captain Jay Baker told Fox5Atlanta.com.

Detectives believe it was a real attempted crime — and the suspect got cold feet. “This was an actual armed robbery that he changed his mind about during the act and tried to downplay and leave the scene,” Captain Baker told Fox5Atlanta.com.

Detectives said the 18-year-old claimed he used an airsoft gun, but investigators found a .357 magnum at the 18-year-old suspect’s home that they believe was used at the vape shop.

Either way, the 18-year-old is now facing a very real charge of attempted armed robbery. He went to jail  — with bond set at $4,875.

Angels, we have heard on high

In East Point, on a Saturday afternoon, police got a call about a woman yelling, “I am God” while waving a handgun in the air near the entrance of liquor store on Washington Road. The woman allegedly was threatening customers entering and leaving the liquor store.

When an officer arrived, the gun-toting woman was “making senseless and illogical statements of “I am God; He is coming down to get you.” Also, a small child was with her.

As the cop exited his patrol car, he said, “Ma’am, what are you doing? Ma’am, put the gun on the ground.”

The woman babbled, “Come on, because if someone is gonna shoot somebody with a child, they don’t give a fuck about God.”

Cops safely disarmed and handcuffed the woman without harming her or the child. The woman was taken for an evaluation

You’re a mean one, Mr. Grinch

More than $10,000 worth of stolen toys are being returned to their rightful owners in time for Christmas — after a major toy rescue in Coweta County. Cops executed a search warrant at a Coweta County home, where suspects were attempting to sell stolen toys from at least two recent burglaries. Toys included GI Joe helicopters, high-end Legos Toys; and Star Wars action figures and spaceships. One person was arrested. The investigation is ongoing at this time.

Wise man beyond the badge

Two Atlanta cops responded to a 911 call about a disheveled man and public indecency in northwest Atlanta. “Upon arrival, the cops observed a man in clothes that were too small to cover his entire body — and the too-small clothes exposed some of the man’s private parts. “This observation is what led to the citizen’s “indecency” 911 call,” the officers reported. The disheveled man did not own any other clothes he could change into.

Instead of arresting the man or ticketing him for public indecency, the senior ATL cop made an empathetic decision: He took the disheveled man to Walmart and bought him a brand-new shirt and pants and some shoes.

"It's not for me. I found a gentleman out there who needs some clothes, so I'm doing the best I can," the senior APD cop was heard telling the Walmart cashier on bodycam footage.

According to the Atlanta Police Department, “Once the mild mannered and grateful man was fully dressed in his new shirt, pants, and shoes, he was on his way, and the officers drove off to wait for the next call.” —CL—