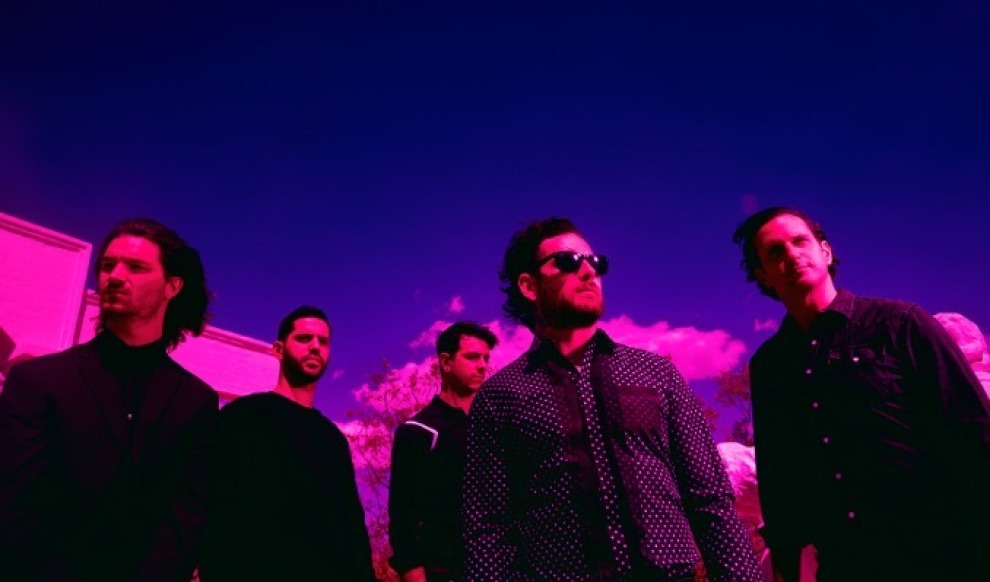 Having a kid changes you. Ask most new parents and they'll say that when you bring a child into the world it instils in you a previously unimagined perspective on existence. Some even go so far as to say that it makes life make sense, that it gives it a purpose. For Buddy Nielsen, the sole remaining founding member of Senses Fail, it's also made him think about his own mortality more than ever before. That started during his wife's pregnancy, but it's persisted ever since. As such, he's found himself staring directly into the black abyss of his mortality a lot recently. It's that heightened sense of his own impending doom that's at the center of Hell Is In Your Head, the band's eighth studio album. "My wife had a pretty serious childbirth,"Â he says. "I don't want to say she almost died but it was pretty scary for a minute. And the relationship you have to have with your child is just a constant letting go of yourself in ways that you didn't necessarily perceive you needed to. I've had to start to come to terms with my own death because my daughter, who's now four, keeps asking about it. So this felt like an opportunity to maybe address grief and how we process being - how do you have a kid, how do you be alive, how do you continue to live a meaningful life while also knowing that you're going to die?"Â

It's those questions and more that Hell Is In Your Head explores and attempts to answer across its 11 dark, brooding songs. It does so in two very distinct halves. Five of the first six tracks - "The Burial Of The Dead"Â, "A Game Of Chess"Â, "The Fire Sermon"Â, "Death By Water"Â and "What The Thunder Said"Â - take their titles from the five parts of TS Eliot's "The Waste Land"Â. They aren't based on the 1922 poem per se, but they're set in its world, and use that setting as a foundation to explore those topics in a more philosophical, abstract and timeless sense. Nielsen, in fact, says he views these six songs "more like a play"Â. That's why the portentous, gloomy, atmospheric opener has "references to exiting and entering the wings of a stage."Â

The second half of the record takes place more in the setting of the real world, where those concerns are more pressing and immediate. Rather than pondering the philosophical nature of death, its songs are more of a real-time observation of it. Take, "Miles To Go"Â, for example. Its title is a nod to Robert Frost's classic poem, "Stopping By Woods On A Snowy Evening"Â, and there's even a quotation from "The Waste Land"Â in there - but its subject matter tackles both the impending extinction-level threat of climate change and the contemporary political dystopia in the USA. Similarly, "Lush Rimbaugh"Â is a bilious invective written for late conservative radio host Rush Limbaugh, with no nods to dead poets. "The back half of the record is closer to how I've always written,"Â explains Nielsen, "which is more sarcastic and autobiographical, like "ËœHow do I deal with the reality that we live in?' It was pre-pandemic, so I didn't write about any of that, but it feels like it might just work in this era because of the amount of grief everyone has to collectively deal with. And the record also too addresses how to exist in the insanity that is this world while also raising a kid and being happy."Â

Needless to say, this album covers a hell of a lot of ground, and does so equally as emotionally as it does so cerebrally. Throughout, it weaves both Nielsen's natural emotions and existential neuroses, and his philosophies as a practicing Buddhist into the very fabric of these songs. Not only are its two halves separated thematically - yet also still bound by the concept of death - Nielsen ensured that they're also split musically. The "Waste Land"Â section is minor key, the second in major. The result is a musical journey that embraces the darkness of its subject matter, but then learns to let go, that indulges in plenty of existential self-reflection, but which also zooms out to paint a more widescreen picture. It mourns loss - both on a personal level and in a more universal sense - but it also accepts death as an unavoidable part of life. It all coalesces to create an intense and thorough examination of what happens when we reach the end, as well as all the many emotional responses we can have to it.

"There are so many different takes on death,"Â says Nielsen. "It can be happy or sad or tragic, and there are so many different degrees of what you can feel. Sometimes, with an ailing parent, you get people wishing that they would just die, especially if it's a long drawn out disease like cancer of Alzheimer's. They feel a sense of relief or excitement that that chapter is over, so it's never as cut and dry as "ËœI'm sad and this is tragic.' There are all these different layers to death and grief, and this record explores the various different degrees of what you might feel."Â

That's not all, either. Nielsen sees this album as a thematic sequel to the band's 2006 second full-length, Still Searching. In fact, Nielsen deliberately began this record in the same key as "The Priest And The Matador"Â, the last song on Still Searching, to really emphasize the connection between the two.
"This album is supposed to take off right where I kill myself in Still Searching,"Â explains Nielsen. "The narrative is that this is the underworld - the wasteland - and here I end up meeting the spirit of my future daughter, as well as my grandma. I'm able to put to rest the grief that I have for her, and I meet my daughter, who brings me back to life. So it's meant to correlate story-wise - not in a direct timeline, but in an alternate wasteland."Â

Yet while this is a musical and thematic counterpart to that record, it also marks a huge step for Senses Fail. Co-produced by Saosin's Beau Burchell, Hell Is In Your Head was recorded at Burchell's studio in Temecula, CA, except for the drums. Those were recorded at Seahorse Sound Studios in LA, and played by Dan Trapp, the band's original drummer. And while the bass was played by the band's guitarist Gavin Caswell, everything else was played by Nielsen. To that extent, this record sees Nielsen, for the first time, fully step into the role of the sole creative force in Senses Fail.

"These songs are my solo vision for what Senses Fail is,"Â he explains. "The band has now become me and vice-versa. I'm trying to put myself on the map as a songwriter and as a complete musician, not just as a lyricist or the singer. This is where I had been planning to get to over the last three records. As a touring entity we are still five people, but when it comes down to the writing, it's a solo vision as far as where I want to take it."Â

Being able to fully immerse and invest himself in that vision meant he could truly bring this album to life - or, perhaps, death. Whichever, Hell Is In Your Head is a true master stroke, the sound of an artist who, 20 years after starting the band, has finally found himself in the place where he always wanted it to get to. The difference now, is that it's all just him.

"I want someone whose favorite record is Still Searching to hear this and think that this is better,"Â he says. "When I first started taking over the songwriting, I wasn't confident that I was going to be able to do any of it. But I gained a lot of confidence being the main songwriter on the last record and realizing that people like my vision for what Senses Fail is - and they're willing to come along for the ride."Â