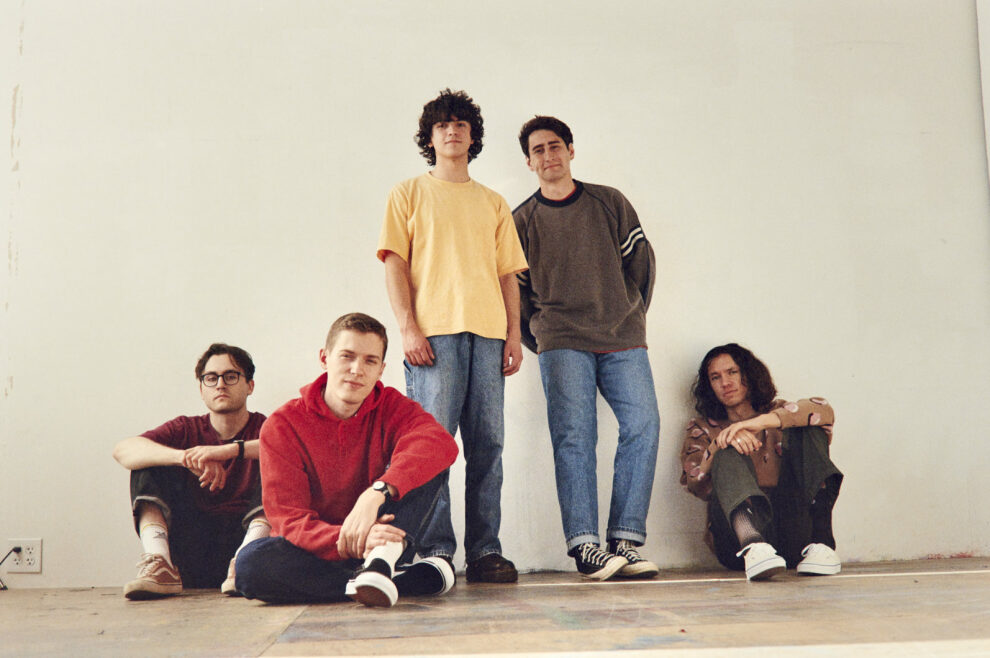 Bio
While crafting Anxious’ new album, Little Green House, the Connecticut five-piece were afforded a luxury so few bands are when making their debut album: time. With extensive touring plans halted and regular life on pause, the band—vocalist Grady Allen, guitarists Dante Melucci and Ryan Savitski, bassist Sam Allen, and drummer Jonny Camner—headed into Allen’s mom’s basement and reflected on each part of the material that would turn into their first record over and over again. The result is an artistic leap that, had the band’s plans to spend much of 2020 on the road actually been feasible, maybe wouldn’t have happened.
Formed in 2016 while members were still in high school, Anxious’ early releases were indebted to the urgent freneticism and heart-on-sleeve lyrics of post-hardcore acts like Texas Is The Reason, Samiam, and Turning Point, allowing Anxious to immediately grab the attention of the hardcore scene. The band’s DIY roots and dedication to craft were equally as essential to their rising profile—early releases were accompanied with band-dubbed cassettes, made-to-order zines, and even self-dyed shirts—each part of Anxious was laid out in meticulous detail from day one. Having almost immediately surpassed Allen’s modest ambitions of “playing a couple of shows,” Anxious quickly found a home on Triple B Records, gaining the attention and adulation of both the hardcore and emo scenes on the back of two seven-inch EPs and a pair of demos, getting them coveted spots on tours with genre-bending acts like Wicca Phase Springs Eternal, before landing on Run For Cover.
Named after the space in which the material was written, Little Green House sees Allen and Melucci exploring what it feels like to enter adulthood in unflinching detail. The pair unpack their struggles, joys, and hard-earned realizations in a way that makes them each feel wise beyond their years. “I think a lot of the record is a coming-to-terms, interpretive record about relationships with people and thinking introspectively,” says Allen. “I’m sure it’ll be a cliché very soon to say, ‘With all the time spent away, I was able to really think about things,’ but having that time ot sit and be introspective really does give you perspective on yourself, the relationships you have with other people, and that recognition that while you might all be interconnected—whether it’s your parents, your friends from high school, people you know through music—it’s bound to happen that you all have deeply individual and separate paths, and that’s okay.”
Recorded and produced by Chris Teti at Silver Bullet Studios, the diversity of perspectives on Little Green House is matched by the album’s ability to jump between sounds without ever feeling disjointed. The band’s commitment to their creative vision and exacting attention to detail is apparent, with Anxious going so far as to completely re-record the vocals until Little Green House was exactly the statement they wanted to make.
That devotion is clear from the very first notes of opener, “Your One Way Street.” Anxious sounds more deliberate than ever, with each riff pounding like a powerful declaration as Allen works through the emotions of watching one of his oldest friendships breaking apart, “I beg you, one last time as a friend / How did we get here and why does this have to end?” On “More Than A Letter” the band explores what it was like to watch a potential romantic relationship fall away because of outside pressures, and the energetic “Let Me” is a show of support from a child to a parent while watching them go through a painful divorce and features guest vocals from Pat Flynn of Fiddlehead. “I guess the idea behind the record is that coming to terms with who you are and accepting that,” says Allen. “Struggle, sadness, and pain aren’t necessarily negative things, but they are necessary things. There’s no shame or sadness put onto these feelings that you’re already experiencing. But there are positive, triumphant elements running through the album, too,” a feeling that’s best exemplified by the triumphant, and aptly titled, “Growing Up Song.”
While fans are used to Anxious’ infectious energy spilling into every song, the closing track “You When You’re Gone” shows a totally new side of the band. Where the raucous parts of the album recall Lifetime and Sense Field, this one’s pure dream pop bliss. Joined by vocalist Stella Branstool on the track, it gives Little Green House an expanded scope, one that showcases a band taking big swings and landing every single one of them.
“The goal wasn’t to create something that perfectly replicates a sound or an era,” says Allen. “It was just about us wholeheartedly trying to create something that felt distinctly like us and not worry for a second if it feels unfamiliar—we just wanted to create something that was unabashedly us.” On Little Green House, that’s exactly what Anxious did. They’ve made a record that captures the bittersweet feeling of returning to a place you grew up and realizing how the passing of time has changed you – a musical snapshot of who they were in an exact moment, and who they want to become now that they’re ready to move on.