Atlanta according to Quianah Upton

A passion for history, culture, design, and decor makes this city perfect for her brand of Arbitrary Living 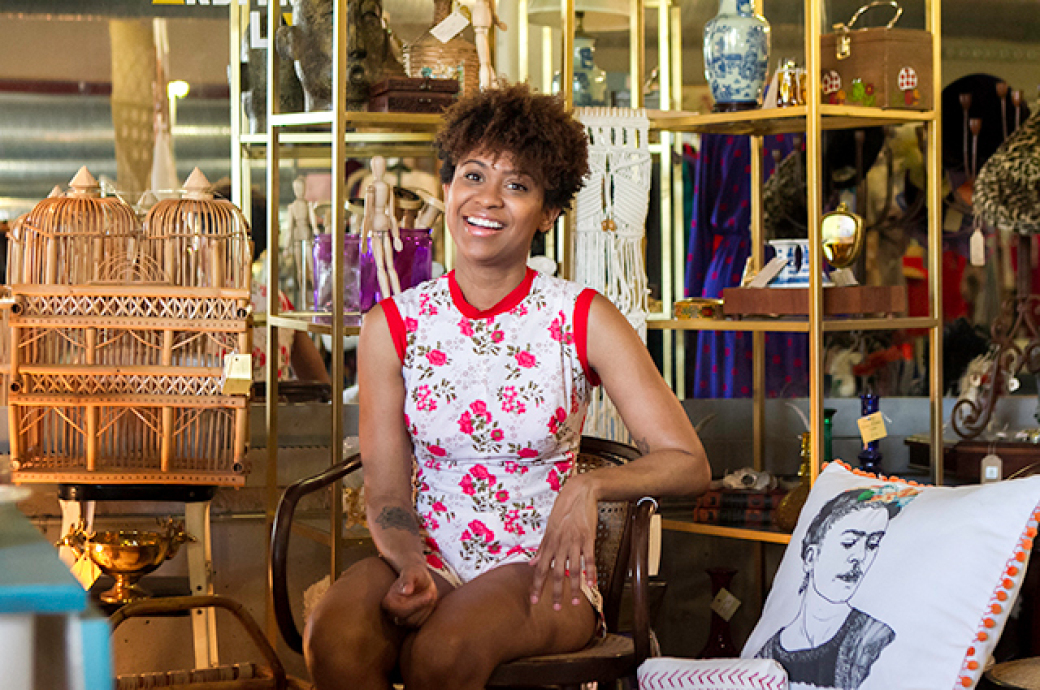 Atlanta wouldn't be the city it is without transplant energy. Don't let anybody tell you different. Since creative entrepreneur Quianah Upton moved here on a whim from Virginia in '07, the Virgin Islands native has planted firm roots within the city's fertile underground. Through her three-year-old lifestyle and vintage décor brand Arbitrary Living, she's made a home for herself that extends from the Auburn Avenue pop-up shop she helmed last year to the city's various summer festivals and cool arts scene. When she's not hosting her Chop It Up branded dinner parties or dreaming up ways to contribute to the city's cultural swag, Upton gets lost in the real Atlanta.

Besides my room, my favorite spot in the city to think deep thoughts by myself would probably be Lake Claire Land Trust. The part that I like the best is this sort of outdoor arena. It's really small and no one's ever up there unless they're having an event. So you can go up there at any time and sit in the audience section and look at this empty stage. Or you can sit on the stage and look at the empty audience. It's a good place to look at different perspectives in your own mind.

Victory Sandwich Bar in Inman Park is my favorite place to do anything. It's chill. It also has that vintage, retro vibe in the décor. And it's cheap. It's just down the street from where I live.

The High Museum is by far the best place to see art in Atlanta. I think they do an excellent job of curating art. I really like keeping up with what the new guy, modern art curator Michael Rooks, is up to. They do a good job. Hands down, best art place.

I don't think that such a place exists that I would advise someone to never go in Atlanta or the world. People should just think free, explore, and go everywhere. Be aware of your surroundings. Don't be an airhead. But be free. You're in this life, so see what's out there.

The best advice I could give Atlanta visitors is get off the beaten path. Follow the railroad tracks. See as many murals and things as you can. And also, eat everywhere. Eat at as many places as you can.

Something I know about Atlanta that maybe most people don't know is Atlanta has like a trillion parks. In every single neighborhood in Atlanta, from the suburbs to the hood, there's a park almost on every block. That's one of the first things I noticed when I moved here. There's a ton of parks.

I think my favorite view in Atlanta is Six Feet Under off of Northside Drive. On the top at night in the evening you can see the skyline. And when you're like a little bit drunk, it's perfect to me.

The Old Roswell Mill Waterfall is my favorite place to go when it is really fucking hot.

The first 3 words that come to mind when I think of Atlanta are soulful, arts, and home. That's what the true Atlanta feels like to me. Ponce City Market and all that stuff is cool. But the parts I like about Atlanta are the parts that have that soulful feeling. It also probably has to do with the history thing that I love. When you can feel the people who were there before you, I like that about Atlanta.

My favorite neighborhood is a tie between Grant Park, because I like the way it feels, and West End, because of how it is very closed off, sort of, from outside people coming in and taking over. It feels like it's been the same way for a long time. And I like that. They probably still have a few more years before it turns into something else.

Actually, the Beltline is my favorite Atlanta walk. If they stopped putting all the apartment complexes around it that are blocking the view, it would be the best place in Atlanta.

My favorite place to drive in Atlanta is probably down Hosea Williams Drive. That whole street goes from like ratchet to family to hipster and you can kinda see that everyone's the same and the geography of the neighborhood doesn't really change that much. Yet people stake their claim in different places. It's interesting.

The Yaarab temple is my favorite building. I've never been inside but from the outside it looks awesome.

I don't want to sound cliché, but Baton Bob is my favorite living Atlantan. He just won all this money from that [[[[[[[http://clatl.com/freshloaf/archives/2015/05/12/baton-bob-to-receive-20000-settlement-for-2013-arrest-in-midtown|settlement] with the Atlanta] police. He's cool. I remember the first time I saw him after I'd been living here for a few years. He just represents. And you're not gonna fuck with him, but at the same time he's wearing a dress. He's cool.

My biggest pet peeve about Atlanta right now is when people are displaced. The street where I live has a crack house at the top of the street. And strangely enough, it burned down. Then the house next to it that was being fixed up went up for sale. A couple of months ago, another house burned down and we found out the land was sold to some big company that's going to put a skyscraper there. They want to build all these apartments and tech places for people to work, but what about the people that live there now? They're not creating anything for anyone except for people that already have things. That's my number one pet peeve with city living.

Atlanta's motto should be what Arbitrary Living's motto is, which is "come together."