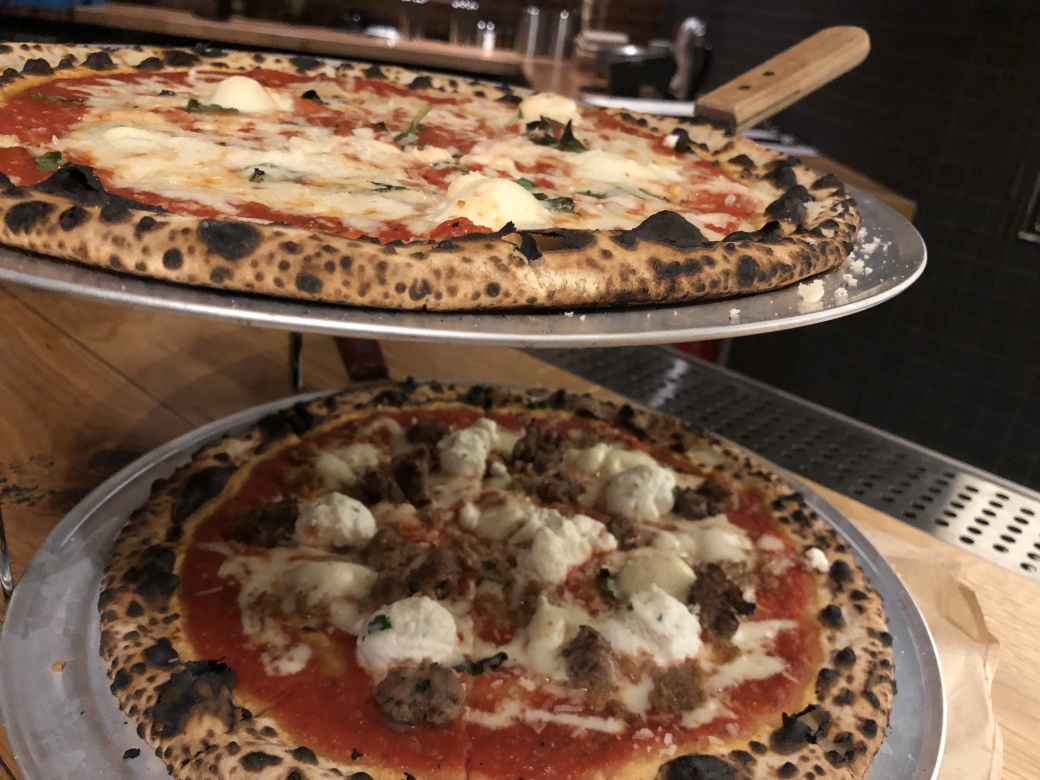 I rarely travel from intown Atlanta to Sandy Springs. I spent my miserable, bullied adolescence there, and driving out Roswell Road is like voluntarily stepping into a psychological cesspool. Back then, it was nicknamed the “Golden Ghetto” and was so white and so upper-middle-class that my own mother once told me if she could do it over, she would not raise her children there. Incorporated since 2005, Sandy Springs is now an example of seemingly unrestricted commercial development, and it is torture to navigate.

However, I couldn’t wait to get out there to try the new Casi Cielo (6125 Roswell Road, 404-549-9411. That means “almost heaven” and doesn’t refer to the location inside a Modera development. It refers to Chef Juan Ruiz’s cooking, inspired by the cuisine of the Mexican state of Oaxaca. I admit I was suspicious. The “upscale” restaurant is owned by La Cosecha Group, which operates the many locations of La Parilla Mexican Restaurant, which, like most Mexican spots here, is more Tex-Mex in many ways than it is Mexican.

That’s not the case at Casi Cielo. Ruiz has an impressive resume. This is his debut job in the U.S. He grew up in Colombia and has done stints at some world-class restaurants in Spain and Panama, but his experience in Oaxaca is limited to two weeks of hanging out with Chef Luis Arellano of the renowned Criollo. It’s tempting to question how the restaurant can dub itself even Oaxacan-inspired with Ruiz’s limited experience, but you have to understand that the state of Oaxaca has a remarkably diverse indigenous population that inhabits an equally diverse topography, from coastal to mountainous regions. The legendary Diana Kennedy’s book, Oaxaca al Gusto, is subtitled “An Infinite Gastronomy.” Foodies from the world over are traveling to Oaxaca for infinite inspiration, not duplication.

Does the restaurant pull it off? I’m not so sure. When four of us visited on a recent Friday night, we were confused from the outset. Here, as everywhere these days, we couldn’t ascertain the portion sizes, so we ended up sharing a bunch of small plates and entrée-sized “platos fuertes.” We agreed that the entrees were mainly better than the apps. My favorite — specifically identified as sharable — was the roasted duck with mole negro served on the side. Because of its great diversity, Oaxaca is called “the land of seven moles,” but the mole negro is the most popular. When he stopped by our table, chef Ruiz told me that he makes it with 20-odd ingredients, as is true with most moles. This one, frankly, tasted a bit sweet and cinnamony to me. But we lapped it up with pieces we pulled from the juicy duck. The plate came with some rice and pork frijolada, which is pureed black beans with pork.

My second favorite dish was the ribeye. There’s nothing particularly Mexican about this; the truly perfectly grilled and sliced steak was served with a side of chimichurri sauce. Ruiz makes it with cilantro instead of the parsley usually used in Argentina, where it originated. Our third entrée was roasted suckling pig — supposedly carnitas, but without the crispy pieces. Flavor was nonetheless great.

The scariest dish was a starter consisting of an octopus arm flopped forlornly on the plate with some mashed potatoes, a Veracruz red salsa, and three large dots of pureed green olives. I had read that the octopus is cooked sous vide and then grilled. Weirdly enough, it instantly reminded me of the ox penis on the menu at Beijing Kabobs on Buford Highway. Like it, the outer part of the octopus was kind of squishy but the interior was very rubbery. There was no flavor except for the olive puree and the salsa. You get at most five bites, and that was fine with me. We also got an order of very thick blue-corn tostadas to break into pieces to dip in a house-made green or red sauce. The green was bracing and sour, as it should be. The red, made with three different chiles, was borderline amazing.  We also were treated to a Oaxacan amuse-bouche of tiny tamales topped with I know not what.

The indisputably big loser of the evening was the sliced halibut. The tiny slivers were curled into something that looked like albino nipples topped with jalapeno pasties. Some tiny flowers prettied up the plate. Please! Give us back that $27!

So, I just mentioned the relatively high cost. Four of us paid about $200, including tip, with no alcohol. I don’t want to contribute to the damaging expectation that a restaurant serving Mexican cuisine should be cheap. That thinking has killed several inventive restaurants in Atlanta. Casi Cielo has been open a couple of months and I hope that Chef Ruiz will continue his interpretive cooking with sourced ingredients and not be pulled into the almost inevitable demand that he submit to Mexican-American clichés. But people are going to have a hard time paying $18 for five bites of rubbery octopus.

Still, the restaurant does have much to recommend it. Just be diligent about what you order. Its bar, by the way, has the widest variety of Mezcals in the city. The space is warm and woody, but sleek and minimalist, without any sign of Mexican kitsch. The service is highly attentive. Even my foodie mother would have liked seeing the prosaic tastes of the Golden Ghetto upgraded with some imaginative Mexican-inspired cuisine.

Foodies wept in the summer of 2017 when Ammazza, a popular pizzeria on Edgewood in the Old Fourth Ward, was struck by two cars on different days, forcing it to close after about five years of operation. I really liked Ammazza, which means “killer” but in, you know, a positive way. The restaurant joined the national obsession with thin-crusted Neapolitan pies, but did not feel 100 percent bound by the rules. Call us Philistines, but many Americans love our pizzas thin, but we don’t like them floppy and wet. Ammazza’s pies were crisper than those at, say, Antico. The owners didn’t feel like every ingredient had to be flown in from Italy. Instead of the usually requisite mozzarella di bufala imported from Campania, for example, they were content to make their own mozzarella. Most meats were bought from the highly respected Spotted Trotter. All of this was fueled by a love of beer.

A new Ammazza has opened in Decatur (314 E. Howard Ave.). Friends and I visited not long after it opened. Not sufficiently checking in with one another, we stupidly ordered four of the smaller pizzas, all made with the same robust red sauce. That and a repetition of Italian sausage made everything kind of taste alike. So, I suggest that a party of more than two buy at least one of the four white, “sauceless” pies or one of the two made with pesto.

We ordered the Margherita, the usual test of any pizzeria, and I’m sorry to say it was not up to our expectations. The pie classically combines a tomato sauce with pools of melting mozzarella and basil leaves. I like an uncomplicated taste of straight-up tomatoes ground in a food processor with some olive oil and a bit of salt, and I want it applied to the dough very lightly. If you’re going to use a relatively bland mozzarella, the basil needs to be turned up to add some clear contrast. Ammazza’s heavy sauce and super-light use of basil didn’t make the grade.

Our favorite pizza turned out to be the Ammazzare topped with Italian sausage, red bell peppers, caramelized onions, fresh basil, and mozzarella. Second-best was the Carne with pepperoni, sweet and hot Italian sausage, sorghum-cured bacon, mozzarella, and basil. Third was the Bolognese with meatballs, sweet and hot Italian sausage, mozzarella, ricotta, and basil. The Margherita scored the lowest. The pizzas are made in two 900-degree wood-fired ovens that produce the much-vaunted speckled char. Unfortunately, our slices were all wet and floppy without a bit of crispness. 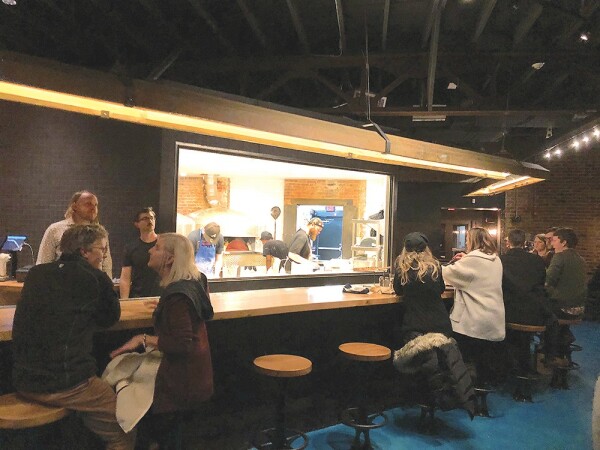 IT’S NOT TV: A view of the kitchen zoo from the bar at Ammazza. Photo by Cliff Bostock.

Starters for the most part fared better. The Caprese salad proved that the house-made mozzarella does indeed have good flavor, as did the Roma tomatoes. The addition of a strong balsamic reduction to the olive oil is considered crass by purists, but I liked it. A Caesar salad was too heavily dressed for my taste. Meatballs in tomato sauce with ricotta and mozzarella were hefty and full of flavor. Cubes of spaghetti fritti made with soppressata, bacon, and cheese added a crispy contrast to everything else we ordered.

I have absolutely no doubt the place will work out its kinks. Next time I go, I’ll orchestrate the ordering to provide more diversity, and you should seriously do the same. There is an option to compose your own pie. You’ll want to think about that before you get to the counter where you order. It’s slow going, but you do get an entertaining view of the kitchen. The staff is on view like zoo animals behind plate glass. We sat at the front bar and watched one dude jive to music we couldn’t hear and continually spin a rag on his finger, but we never saw him do that with the pizza dough itself.

Meanwhile, the original Ammazza on Edgewood is on the verge of reopening. Please bike or walk there. We don’t need any more car crashes.