Last year, the Atlanta Film Festival programmed such films that won national acclaim, including the Mr. Rogers documentary Won’t You Be My Neighbor?, the drama Blindspotting with Daveed Diggs, and critically beloved Eighth Grade.

One of this year’s highlights promises to be the April 5 opening night presentation of The Farewell, a drama starring Awkwafina that was a hit at this year’s Sundance Film Festival. Writer/director Lulu Wang will be in attendance. The ATLFF’s closing night production, Them That Follow, looks at a community of Appalachian snake handlers and stars newly-minted Oscar winner Olivia Colman opposite “Justified”’s Walton Goggins. Goggins had an early career breakthrough starring in the Oscar-winning short film “The Accountant,” which first played at the ATLFF and remains one of the best films ever made about the South.

This year, the 43rd festival drew from a record-breaking 8,400 submissions to present 31 features and almost 100 short films from April 4 through14. The ATLFF estimates that 20 percent of the productions have Georgia connections, either coming from native Georgian filmmakers or being filmed in the state. While the festival screens documentaries and narrative features from around the world, it also conveys the many facets of the expanding local motion picture industry.

One impressive local debut is Reckoning, by Ruckus and Lane Skye. The married filmmakers make the most of a limited budget in an Appalachian thriller with echoes of “Justified” and Winter’s Bone. Danielle Deadwyler gives a compelling performance as Lemon, a mother of a young boy, whose missing husband’s poor choices entangle her between two feuding families.

In one scene, Lemon must transport a jar of what we think is moonshine but discover is a terrifyingly caustic acid, and the tension the filmmakers build around the substance — seemingly harmless yet capable of shockingly sudden, violent consequences — matches their treatment of the mountains, which seem placid but contain hidden threats. Reckoning’s slow burn conveys the lengths to which a mother will go to protect her family. It features numerous memorable supporting players, such as PushPush Theater co-founder Tim Habeger as a cult leader and Catherine Dyer as a folksy home-cooking matriarch who’s also a scheming sociopath.

The surreal dark comedy Greener Grass, also filmed in Georgia, captures the sinister undertones of an even more harmless-looking location. Writer/directors Jocelyn DeBoer and Dawn Luebbe play a pair of soccer moms in an idyllic but creepy suburb where the adults all have braces and wear pastels, and everything operates under dream logic. At one point the wives chat at a party, kiss their respective spouses in uncomfortable close-ups, then stop and exclaim “Oops, wrong husbands!” and switch for the remainder of the film.

Greener Grass presents a sharp take on the competitiveness, self-consciousness, and passive-aggression of suburban moms in a film that looks like “Desperate Housewives” by way of David Lynch. DeBoer and Luebbe are veterans of Los Angeles’ improv troupe the Upright Citizens Brigade, and their cast includes D’Arcy Carden of “The Good Place” and Beck Bennett of “Saturday Night Live.” Overall, the film plays like a compilation of a weird, recurring “SNL” sketch from the Kristen Wiig era — just when it seems like it offers nothing but a variation on the same joke, it tosses out a fresh idea that buys a little more time. If not entirely satisfying, Greener Grass leaves you eager to see what DeBoer and Luebbe do next.

Jacqueline Olive’s powerful documentary Always in Season presents a scathing indictment of the legacy of American racism. In part, it offers an expose on the 2014 death of teenage Lennon Lacey, who was found hanging from a swing set near his home in Bladenboro, NC. The death was ruled a suicide despite the family and community’s belief that it was a lynching. 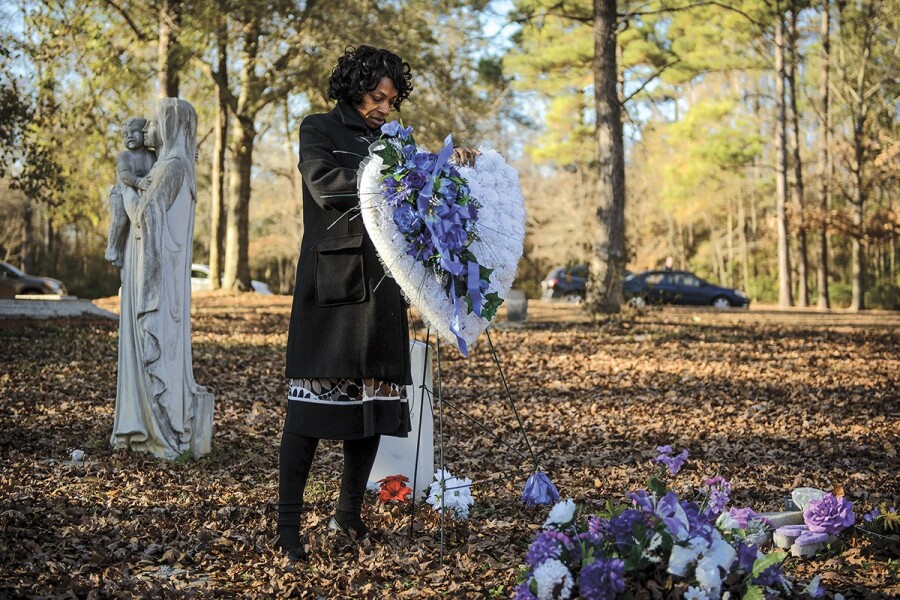 Narrated by Danny Glover, Always in Season presents impassioned arguments that the Lacey investigation was mishandled, set against a backdrop of the history of lynching. Deeply disturbing archival images show white throngs posing below dangling bodies. The film includes a fascinating portrayal of an Atlanta-based project: an annual reenactment of the unsolved Moore’s Ford Lynchings in Monroe Georgia. At times, Always in Season’s historic threads seem to distract from the Lennon Lacey case, to the point that it seems like the material might have been stronger as two separate short documentaries, rather than one full-length one.

The shorts program, “It’s a Wonderful Day in the Neighborhood,” offers a kind of kaleidoscopic look at the diversity of styles and concerns in local filmmaking. As if in tune with Atlanta’s horror scene, Jared Callahan’s “Meat Eater” and Brian Lonano’s “Gwilliam’s Tips for Turning Tricks into Treats” have fun flipping grisly entertainment tropes upside down. Molly Coffee’s “Cracks” offers a snapshot of the punk scene in a dialogue-free character study about a young woman whose self-perception takes a blow after an assault.

Robyn Hicks’ “Nobody’s Darling,” unfolds as a lovely two-hander starring Caitlin Josephine Hargraves and P. David Miller, as a young hitchhiker and an older man who meet in a bar and make a deeper connection than anyone expects. And Lithonia High School serves as one of the backdrops of “dear, dreamer,” a short profile of YA author Jason Reynolds that celebrates the rhythms and possibilities of language.

Other local films include Pageant Material, a gay, Southern retelling of “Cinderella,” that was filmed in Georgia by director Jonothon Williams and culminates at a teen drag pageant in Atlanta. -CL-

Screen Time is a monthly column about film and cinematic narratives, from the big screen to streaming services